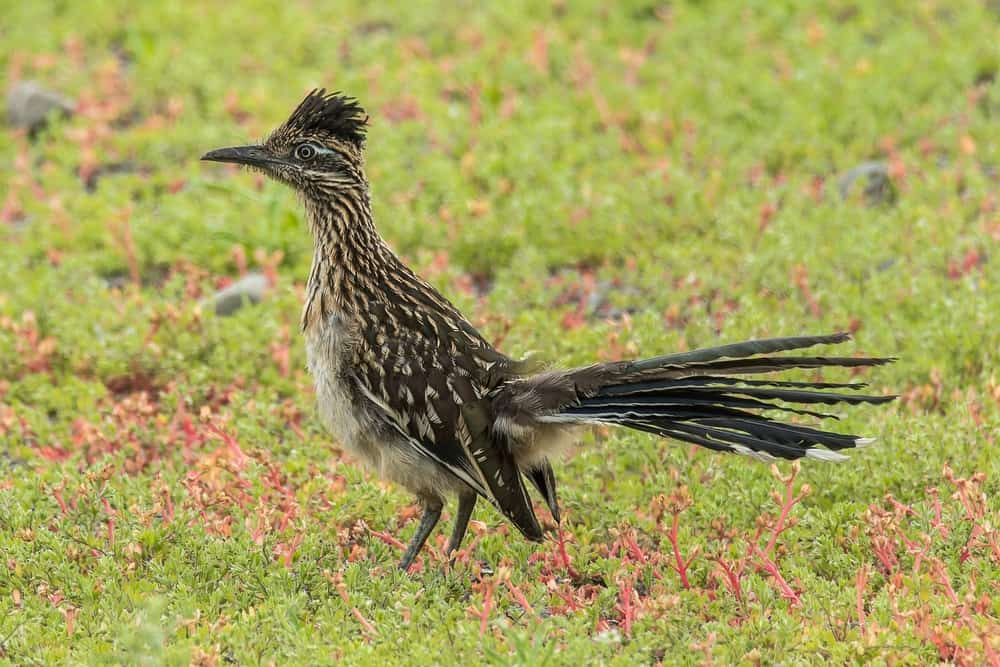 If you’ve ever seen the classic cartoon show the Looney Tunes, you might be familiar with a speedy bird that always outruns Wile E. Coyote. While the antics were for fun, this bird is truly as strange and captivating as the cartoon depicts.

To fuel their fast fury, roadrunners mainly eat insects, small reptiles and mammals, fruits, and seeds. They may also eat scorpions and eggs. They are primarily hunting birds that enjoy catching live prey through a series of unique hunting habits.

This article will cover the characteristics and diet of roadrunners, including how they hunt their prey.

1. The Physical Characteristics of Roadrunners

Roadrunners are unique birds made known to most by the roadrunner cartoon. While its name and cartoon depiction show some relation to the real animal, there is more to the roadrunner species than just a fast-running pace.

Roadrunners are thin birds that are usually only two feet long from beak to tail. Both males and females have similar statures.

They have curved beaks, or bills, and long tails. This frame allows them to hold their bodies parallel to the ground as they run, using their long tail as a rudder to help them navigate.

Roadrunners usually have brown and tan feathers on their rounded wings. They also have an entertaining crest on their head that is used to communicate with other roadrunners. The area underneath their beaks doesn’t have any feathers and can be fluttered to help them cool off.

While they can fly short distances, they prefer to move quickly on the ground, reaching speeds of 15 mph or up to 26 mph when sprinting.

Their two lanky legs are supported by feet with four toes – two pointing forward and two back. This creates an X pattern when they run, making it difficult to determine if they are coming or going. These same toes are used to hold on to things, perch, and climb.

Roadrunners are curious creatures with a unique range, habitat, and life cycle. They are split into two main species: greater roadrunners and lesser roadrunners.

In the U.S., you can find roadrunners in New Mexico, Arizona, Texas, Oklahoma, and southern California.

They’re usually seen on low perches or walking on the ground, in low bushes, or in trees. They try to nest at least a few feet above ground to avoid predators, lining the home with leaves, grass, and other natural materials.

Male roadrunners will try to conquer female roadrunners through courtship rituals. He will first chase the female on foot. Then, he’ll bring her food, such as a lizard, in his beak. He may also jump into the air and make cooing sounds for attention.

Roadrunners mate for life and defend their territory together. They will breed between March and October and lay between two and eight eggs each breeding season.

Chicks hatch after 20 days, leave the nest at 18 days old, and can feed themselves by 21 days old. Roadrunners normally live seven to eight years.

3. What Do Roadrunners Eat? 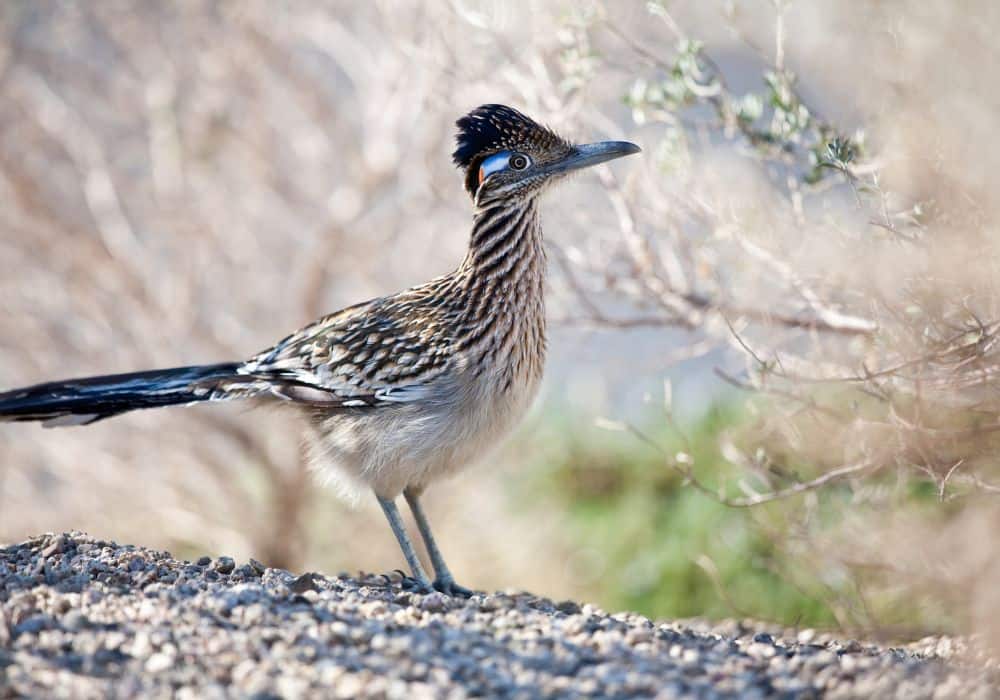 Roadrunners are omnivores that eat insects, small reptiles, small mammals like rodents and birds, fruits, and seeds. They prefer to catch and kill live prey instead of scavenging.

Insects in their diet include millipedes, crickets, beetles, mealworms, centipedes, cockroaches, mosquitos, spiders, dragonflies, and others.

Reptiles are a favorite of roadrunners, especially lizards and small snakes. Their hunting method is rather peculiar, as they run circles around their prey, stab it, and then smash it repeatedly against the ground or rock until it’s dead and softened.

When killing a snake, it will also jump up and down to avoid its bite until they get a strong hold on its head. Snake venom, such as that of a rattlesnake, does not affect the roadrunner during digestion so long as the bird has no wounds in its digestive tract.

Roadrunners may also use this hunting method with small mammals, such as mice, rabbits, and small birds. They’ve also been known to steal baby chicks and eggs out of the nests of other birds.

When it comes to their preferences for vegetation, these birds look for prickly pear cacti and sumac plants which they forage from the ground. They may also eat mesquite beans, yucca flowers, and seeds that are found in their desert environment.

Roadrunners will drink water if they find some but get most of their hydration through their food. They have a special adaptation that allows them to absorb water through their digestion system, meaning they can easily live in very dry environments. The roadrunner’s adapted body can conserve water, excreting excess salt from special glands it has near its eyes.

If you’re feeding a roadrunner at home or wondering what they eat in captivity, you may be wondering what to feed them. Since purchasing rattlesnakes and baby birds for fresh consumption is not feasible, most captive roadrunners survive on a diet of insects and commercially frozen mice.

Insects, in particular, can include mealworms and crickets, which are sold at most pet supply stores. 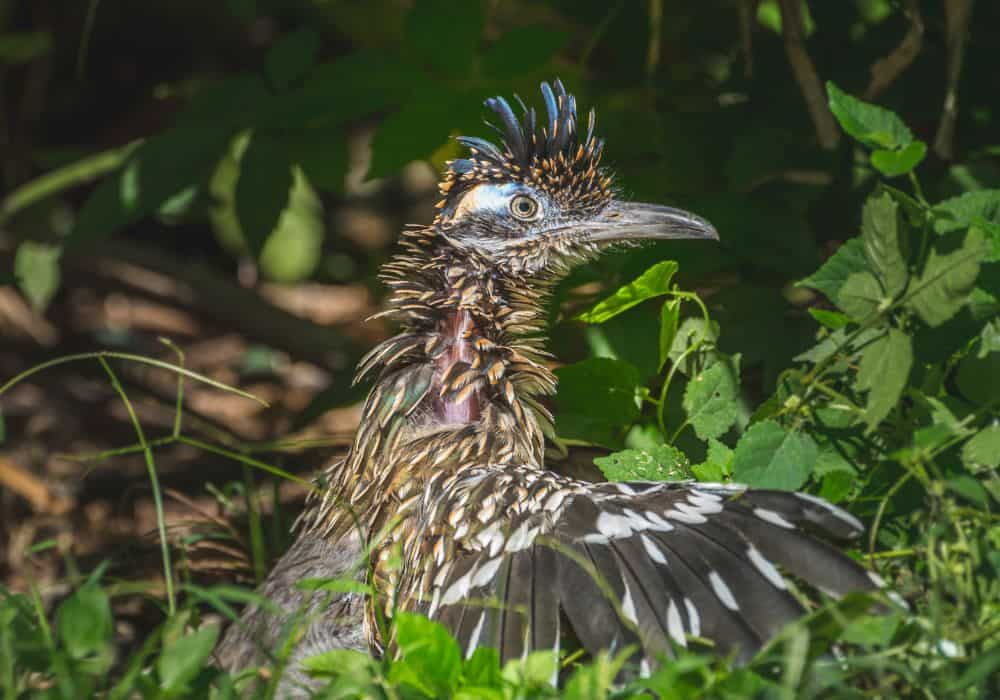 As the baby roadrunners grow, they will be fed firmer food that the adults hunt or gather, including small freshly killed creatures. These little critters learn to hunt and can catch their own snacks by 21 days old.

In some cases, adult roadrunner females will lay their eggs in the nests of other birds. The baby roadrunner is then raised by a different species of bird who feeds it until it’s large enough to leave the nest. These baby roadrunners, called brood parasites, may be cared for by ravens or mockingbirds, which means they’ll eat whatever those species normally feed their young.

Roadrunners in the desert eat what’s available. This includes small lizards, tarantulas, snakes, scorpions, and insects. They will eat almost any snake they come in contact with so long as it’s the appropriate size.

When times are tough and live prey isn’t available, the roadrunner will eat dessert fruits such as those on cacti or any seeds it can find. They will also eat carrion (dead animals) if they come across any.

4. Do Roadrunners Change Their Diet Seasonally? 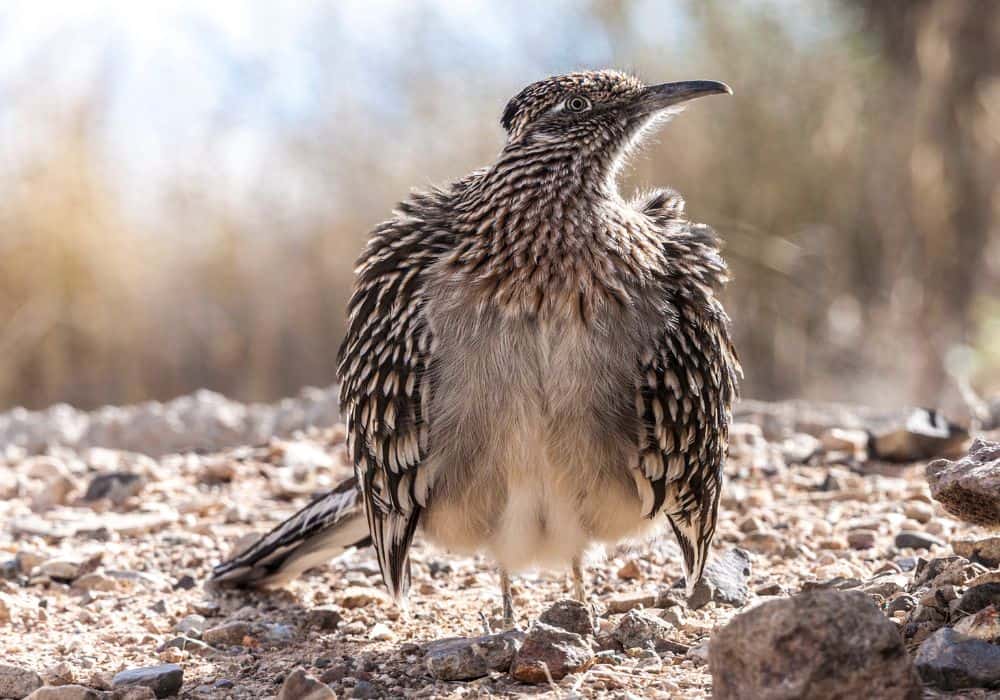 Roadrunners are opportunistic eaters, so they will consume whatever is available.

Since many roadrunners live in the southwest, they experience harsh weather. The southwest climate could include monsoons, extreme drought, and even flash floods. They may not actively change their diet seasonally, but they’ll be forced to eat more of certain foods in one season simply because it’s what’s available.

Roadrunners normally focus on eating reptiles like snakes and lizards, especially during the breeding season.

In winter their diet consists of 10% vegetation. They also have ways to conserve energy during the cold months so they can live off of less food.

When other food sources are scarce, they’ll focus on any fruit and seeds in the area, as well as any available vegetables. Those that live near humans have been known to eat garbage and pet food too.

5. How Much and How Often Do Roadrunners Eat?

Roadrunners eat whenever they get the chance. This means their food intake isn’t stable but instead relies on their environment and how successful they are at hunting.

If a roadrunner is full, it will stop eating. You will see roadrunners eating more than normal during breeding season when the female must produce eggs or when parents need to feed their babies.

6. Do Roadrunners Chase Their Prey?

With average speeds of about 15 mph, roadrunners rely on their speed for both safety and hunting. They can sprint faster than 20 mph, saving them from predators like raccoons, hawks, and coyotes.

Apart from safety, this speed can help them capture lizards and snakes which run upwards of 10-15 mph. They also tend to run laps around their prey – especially snakes – to confuse them, waiting for the opportune time to peck at the prey’s head, snatch it in its beak, and smash it onto the ground.

Roadrunners are fast birds who rely on strategic hunting methods to capture their next meal. They prefer to eat insects but will also eat reptiles like lizards and snakes, scorpions, small birds and rabbits, eggs, desert fruits, and seeds.

Living primarily in desert environments, these birds kill reptiles and mammals by running circles around them, grabbing them in their beaks, and hitting them against a rock or the ground repeatedly. As cute as they may be in a cartoon, they are quite the predatory species with an impressive, if not foreboding, reputation.

1. What Can I Feel To Wild Roadrunners?

You can feed wild roadrunners insects like mealworms and crickets or commercially frozen mice.

2. Can You Have a Pet Roadrunner?

Roadrunners are not made to be kept as pets and, in most places, it’s illegal to own one.

Roadrunners are not friendly towards humans and may peck if they are cornered or feel threatened. Although they aren’t known to attack humans without reason, they are extremely aggressive and should not be approached in the wild.