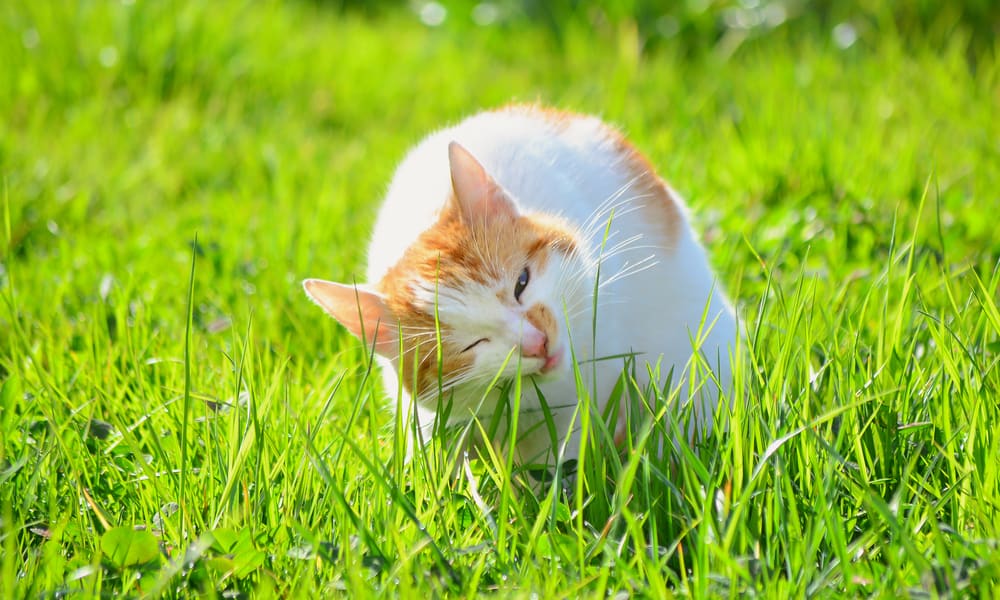 Many of us love our cats and see them as important and cherished members of our families. However, cats are also independent animals that sometimes behave in ways we find difficult to understand – and one good example is when we see them eating grass.

It can be disconcerting if your furry friend starts eating grass or other plants, and sometimes it can be a cause of great concern for owners. So to explain this kind of behavior – and also to help put your mind at rest, here we discuss the question, why do cats eat grass?

In cats, grass is not considered a type of food, and the consumption of non-food items in cats and other animals – including humans – is known as pica.

Sometimes, people have been known to consume non-food items such as earth, metallic objects or other inappropriate material. However, even in humans – when it’s possible to simply ask why they are eating these strange things – often we can’t explain it.

In humans, it is thought that pica can develop for a range of reasons, and the same is true in animals.

Like cats, dogs are also known to occasionally eat grass, but while there may be some overlap, the reasons for dogs and cats to eat grass are not necessarily the same.

However, before we go any further, we can point out that it is far from uncommon for cats – or dogs – to eat grass. One study showed that 71% of cats were observed eating grass at least six times during their lives, and only 11% were never seen indulging in a little nibble.

What this suggests is that in most cases, cats eating grass is a normal, natural behavior, so you should need to worry too much about it.

So now let’s look at some of the main reasons for cats to eat grass – or at least, the most common theories suggested for this behavior. 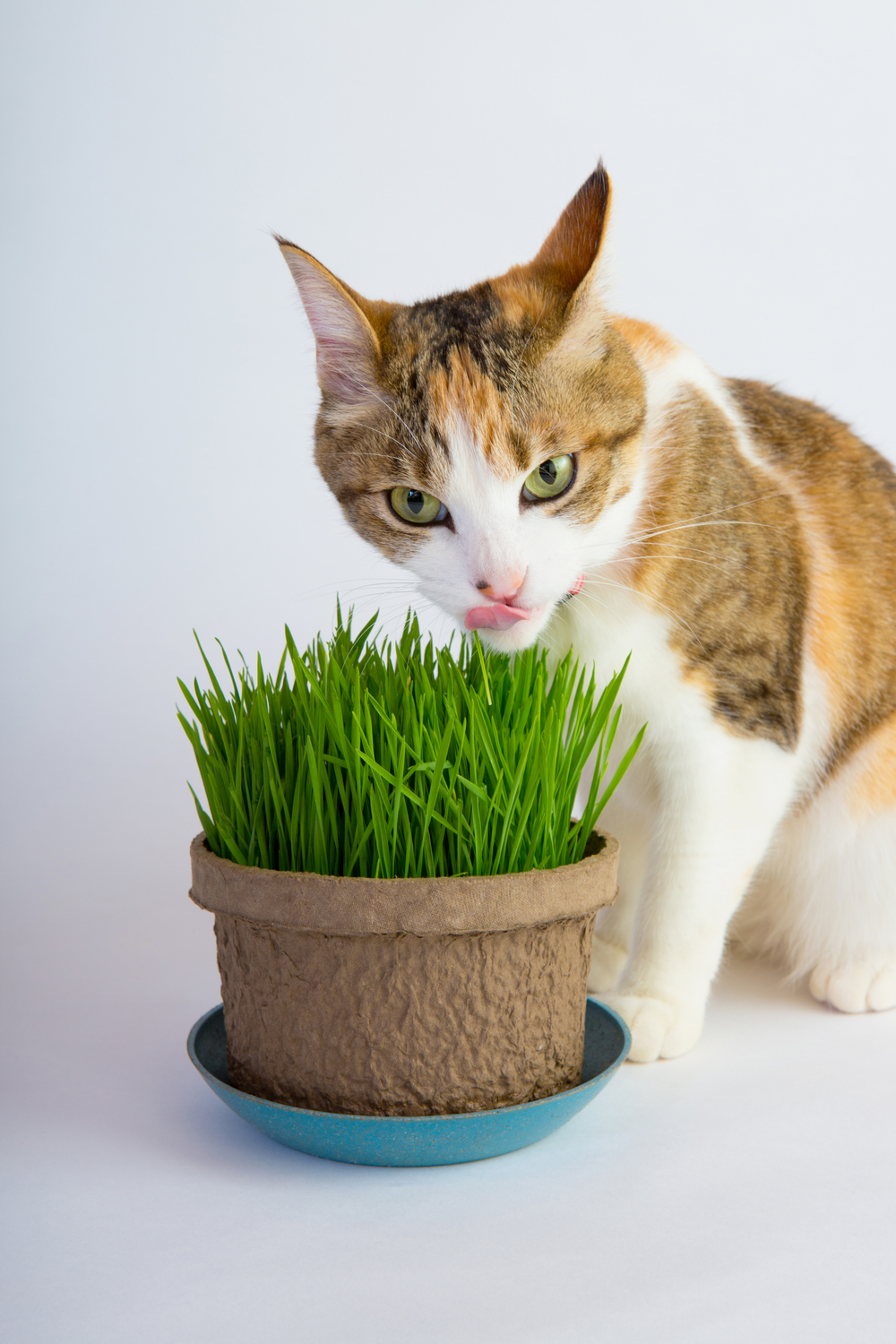 As we’ve mentioned, there is probably no single reason why cats eat grass, so if your cat indulges in the practice, it could be down to one of several cause – or even a combination of them.

1. Self-medication for an upset stomach

One of the most common ideas about why cats eat grass is that it is a form of self-medication against an upset stomach.

The suggestion is that the cat feels sick, so it eats grass to induce vomiting, purging its stomach of whatever it ate that made it feel ill in the first place.

One argument why this may not be true is that cats aren’t capable of the kind of thought processes required for self-medication in this way. However, it could also be argued that the behavior is instinctive, so we can’t discount this theory just for that reason.

Another more compelling argument against this theory exists, though.

It has been observed that only around a quarter of cats vomit after eating grass.

Furthermore, 91% of owners have reported that their cats weren’t showing symptoms of sickness before eating the grass.

So at the very least, we can say that the idea that cats eat grass as self-medication to relieve an upset stomach is not the main reason for this behavior.

While cats might not be eating grass to relieve an upset stomach, there is another closely related theory that might seem a little closer to the mark.

Cats are natural predators, and when they catch animals like birds or small mammals, they eat their prey whole, fur, feathers, bones and all.

However, much of this material can’t be digested in the cat’s stomach and needs to be ejected from one end or the other.

Indeed, in wild felines – including large cats like lions and tigers – vomiting the undigested, undigestible remains of a meal is a natural part of the feeding process, and the same can happen in domestic cats.

The suggestion, then, is that domestic cats consume grass to induce vomiting, not as a way to relieve an upset stomach but as a way to get rid of small bones, feathers and animal hair that are stuck in their digestive tract.

There is still the problem that not all cats that eat grass subsequently vomit, but it is possible that at least in some cases, this could be one reason for cats to engage in this habit.

3. To aid with bowel movement

Another possibility is that cats eat grass not to induce vomiting but to help the undigestible material in their diets to pass through their system and exit from the other end.

Cats are what’s known as “obligate carnivores”, which means that their nutritional requirements are met by eating meat alone – they don’t need to eat plant matter for nutritional purposes.

However, at the same time, plant matter can provide additional fiber that helps ease the passage of food through a cat’s digestive system, and it is thought that eating grass is useful for this reason.

Essentially, when fur, bones or feather make their way deeper into the cat’s digestive system, it becomes no longer possible to eject them through vomiting – at which point, the undigested material needs to be passed as stool. And eating grass may be a way of helping it along.

Grass is known to contain folic acid, something that is found in cats’ milk, so another idea is that cats eat grass because they are missing this essential nutrient in their diet.

Folic acid, also known as vitamin B9, is responsible for helping oxygen move through the blood system, and if a cat isn’t receiving enough in its diet, it is possible that it turns to grass as a supplement.

This is theory that could be true, at least in some cases.

One idea that has been suggested is that cats eat grass to induce vomiting, not to help regurgitate furballs but as a way to reduce their parasitic load.

According to this theory, cat ancestors engaged in similar behavior because the increased intestinal muscle activity helped reduce the number of parasites found in the gut.

It has also been noted that parasites may become entwined in the grass ingested by a cat, and they are then ejected – out of either end.

The theory then posits that, although though modern domestic cats are far less likely to have parasites inside them, since this behavior has been “learned” through evolution, domestic cats still eat grass even if they no longer have the physical need.

Again, while this is almost certainly not the only reason cats eat grass, it is possible that this is one factor that may contribute to this behavior.

6. Reasons due to anxiety or stress

Finally, one last reason cats eat grass is not physical at all but psychological.

If cats are stressed or suffer from anxiety, this may manifest itself in a number of ways. Some cats are known to overgroom, others may engage in excessive vocalization, some become aggressive or begin avoiding their owners while others still start chewing everything they find.

And some eat grass.

This is a behavior that is also found in dogs that are bored, under-stimulated or lonely, and while cats don’t require the same social environments as dogs, if something upsets them, they may develop similar kinds of behaviors.

Is it safe for cats to eat grass? 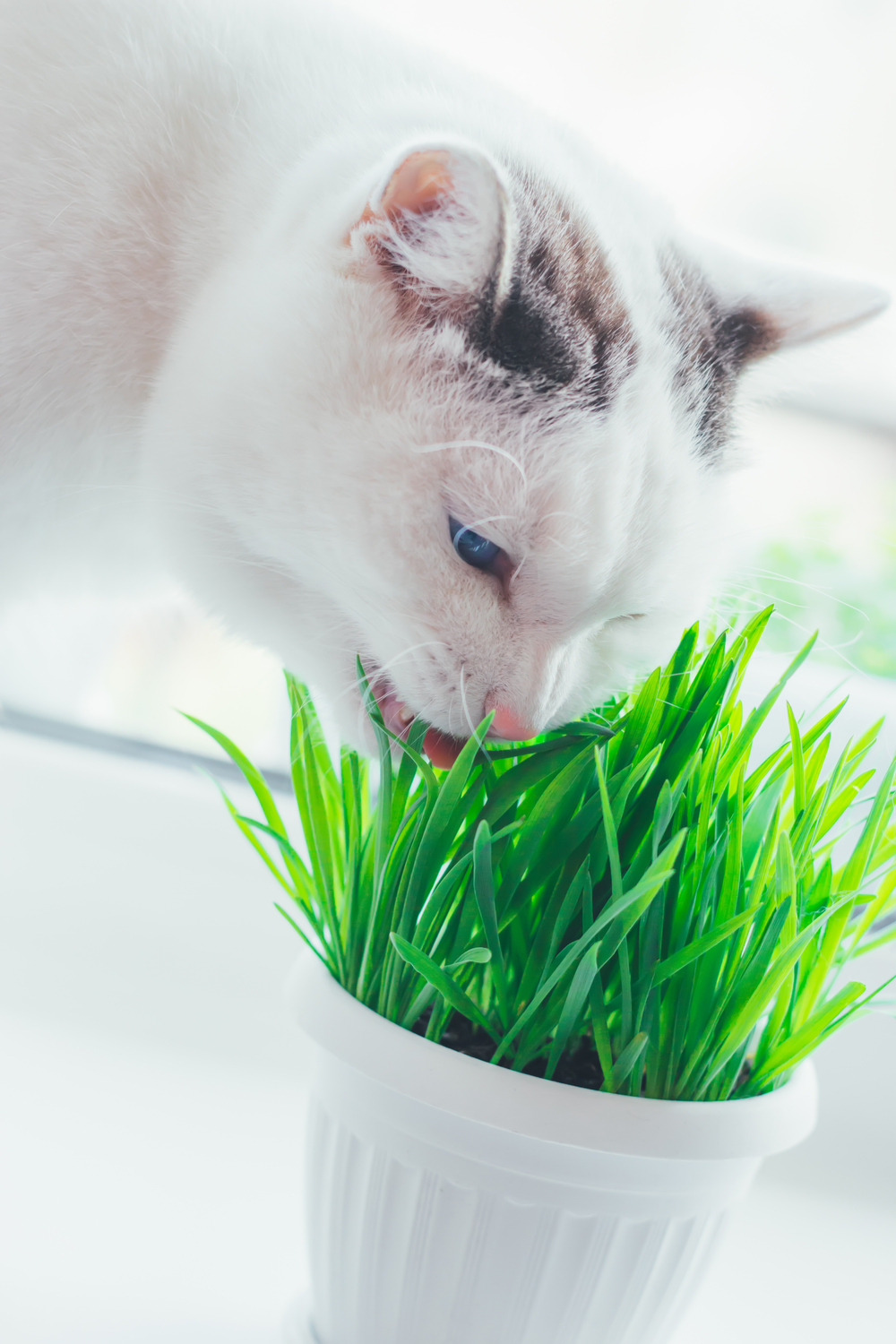 As we have already mentioned, eating grass is a common behavior in cats and one that can be considered natural, even if cats don’t have a nutritional need for plant matter.

This means in the majority of cases, seeing your cat nibbling on grass or other plants from time to time shouldn’t be anything to worry about.

That said, if you think your cat is indulging excessively in grass, it could be a sign that something is amiss – especially if your cat regularly vomits afterwards – in which case, a trip to see the vet is advisable. This way, you can rule out illness or nutritional deficiency.

Also, note that while eating natural, untreated grass is fine, lawn grass is often treated with chemical fertilizers, herbicides or pesticides. These substances can be harmful to cats, so this kind of behavior should be discouraged.

Bear in mind too that many outdoor and indoor plants are harmful to cats. For example, kalanchoes and lilies are known to be toxic to cats, so if your cats are eating plants like these, it can be highly dangerous for them and should be stopped.

Another point to be aware of is that cats can pick up parasites from eating grass where other animals have defecated.

Finally, when cats eat grass, blades of it can become stuck in the nasal chambers, causing sneezing. If this happens, you will need to take your cat to the vet to have the grass safely removed.

What should you do if your cat eats grass? 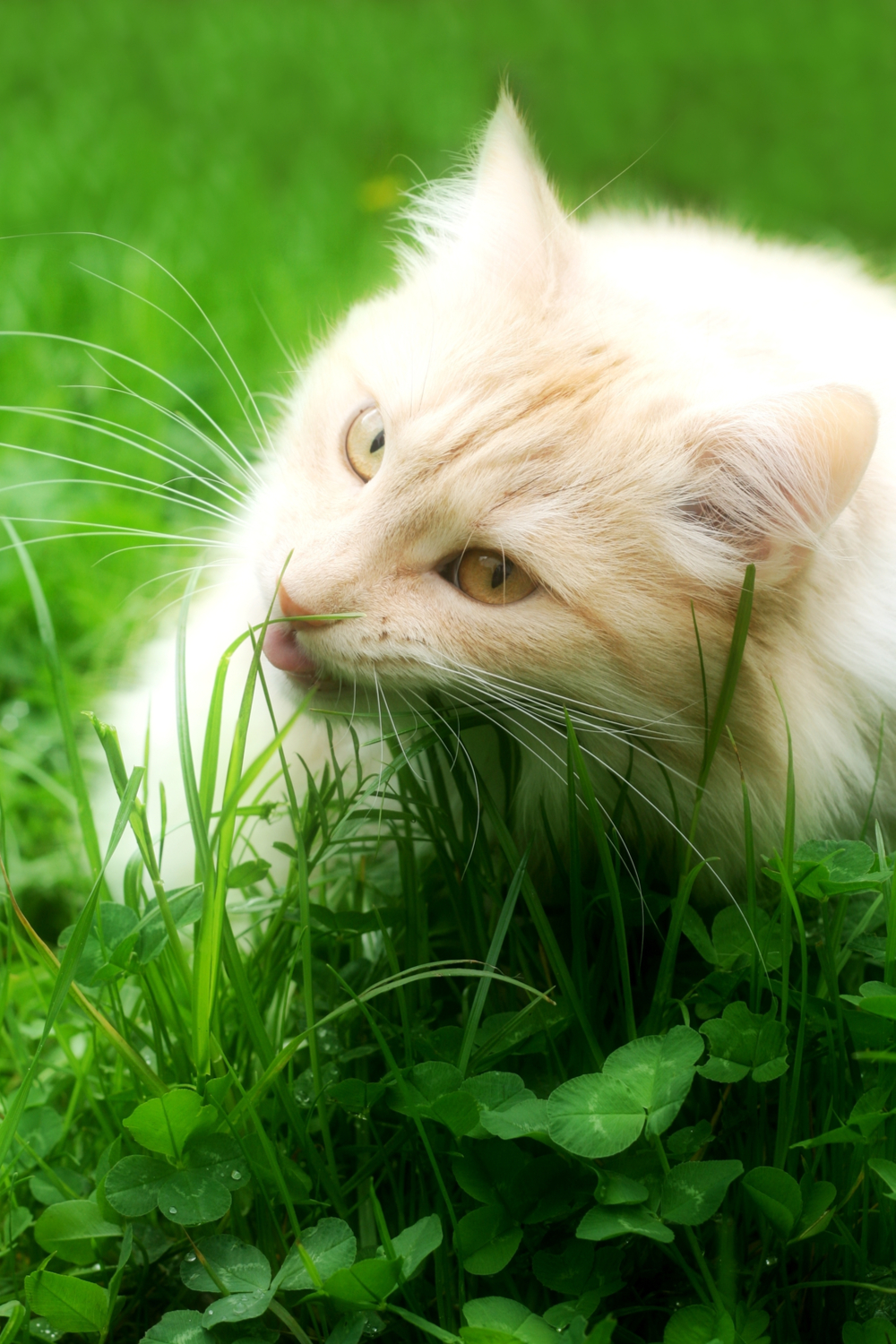 As we’ve seen, there are several reasons for cats to eat grass, and most of them are nothing to worry about. However, if you are concerned about your cat’s grass-eating habits, there are a few steps you can take to rectify the problem. So let’s have a look at some of these now.

Take your cat for a check-up

If your cat begins eating grass, it could be due to a nutritional deficiency or an illness, so to be sure, a trip to see a vet could be a good idea.

The vet will be able to run the necessary tests to make sure your cat is receiving all the necessary nutrients in its diet and will also be able to eliminate the possibility of disease, which at least will mean you won’t need to worry about the health of your four-legged friend.

Remove poisonous plants from your home

If your cat is a plant-eater and you have plants that are known to be toxic for cats, the safest thing is to get rid of them.

That way, there won’t be any possibility of your cat consuming anything that could make him sick – or even kill him.

Similarly, if your cat spends time outside, make sure you treat your lawn and plants with pet-friendly products to ensure your cat doesn’t consume any harmful chemicals that way.

If you have an indoor cat, you can consider growing a small patch of grass in a pot for the cat to play with. This way, you will know that the grass doesn’t contain any harmful chemicals, and your cat will be able to eat a bit safely anytime she feels the need.

Another option is to provide cat grass or catnip for your cat to play with. Again, it’s safer than grass from outside and it will give your cat access to grass whenever necessary.

And even if your cat doesn’t eat the grass you provide, at least it will provide another source of stimulation and something else for your cat to explore in its indoor environment.

At the same time, don’t discount the fact that some cats may just eat grass because they enjoy it – so if it can help enrich the cat’s life without doing it any harm, it can only be a positive thing to provide some for your pet.

Final word – probably nothing to worry about

So to summarize, many cats eat grass and other plants from time to time, and generally speaking, it shouldn’t harm them – unless they are eating grass that has been treated with chemicals or they start consuming plants that are known to be toxic to cats.

Because grass-eating is so common in cats, it can be considered a natural behavior and so is nothing to worry about. Sometimes it can be hard to know exactly why a cat is eating grass, but it is probably fulfilling a biological need, in which case, you don’t need to try to stop it.