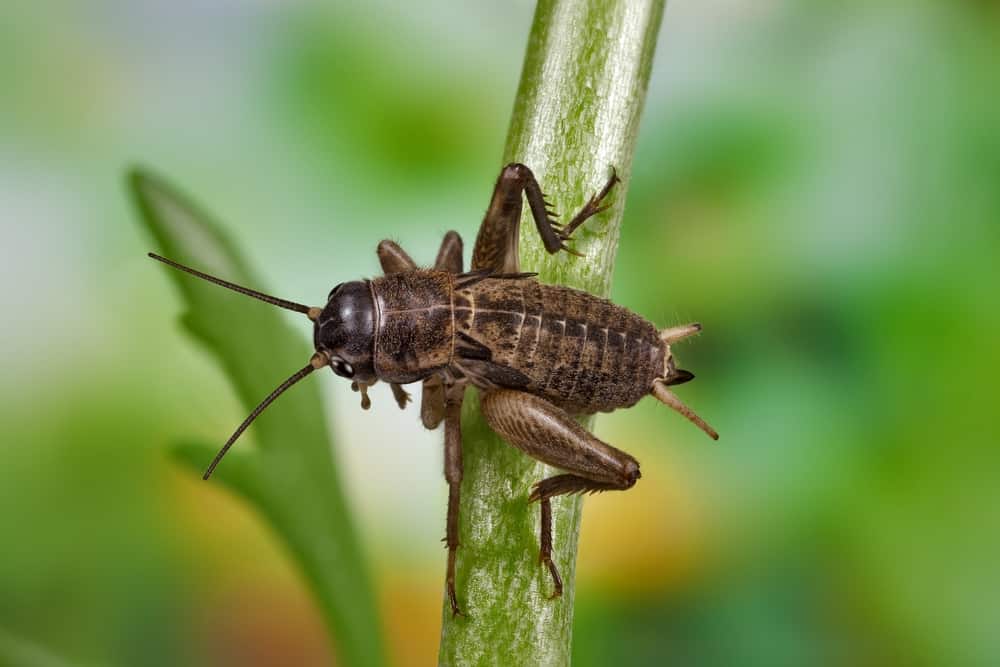 Crickets have been buzzing around different parts of the world for centuries. A member of the Gryllidae family, today there are over 900 cricket species across the globe. Crickets have long been viewed as symbolic, and a variety of different cultures view crickets similarly.

Some humans are afraid of them while others see them as intriguing. And in the evenings, you may hear crickets singing, for they do this by rubbing their wings together to make a high-pitched chirping sound.

To know more about how crickets are viewed in cultures today and how they were viewed by cultures of yesterday, read through the sections of his article, below I talk about the ins and outs of cricket symbolism as well as other relevant information. 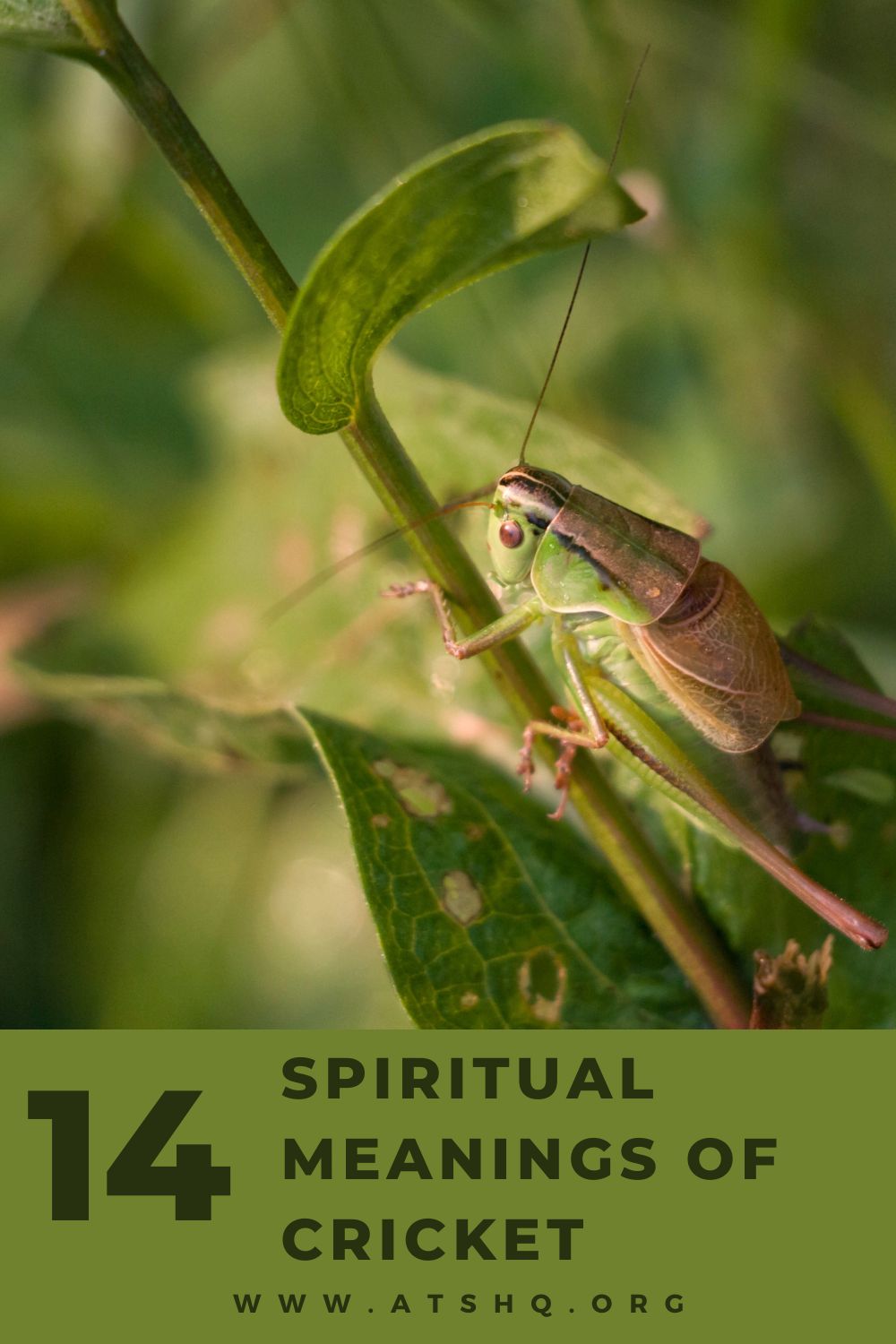 1. Why Are Crickets Symbolic?

Throughout the world, cultures associate crickets with self-expression, intuition, focus, sensitivity, luck, wealth, and communication. Since crickets are associated with so many positive things, it’s no wonder killing one of these insects is thought to bring incredibly bad luck.

One reason why crickets are thought to be intuitive communicators is that they have prominent, long antennas; these remind individuals of spiritual enlightenment and the awareness one can feel while being at one with their natural environment.

2. What to Expect After Encountering a Cricket

Running into a cricket is thought to be a good sign. And in some cultures, if you see a cricket, you’re encouraged to take a leap of faith right after. A cricket encounter may also mean that good news is on the horizon.

If you see a cricket in your home, this is an especially good sign; this may even indicate that something good is going to happen to you as a homeowner. A cricket encounter should inspire bravery and encourage you to pursue endeavors that you once thought were out of reach.

In some cultures, crickets are associated with fertility, so women who come into contact with them are thought to have a better chance of getting pregnant.

Those who are in tune with their spiritual side enjoy seeing crickets because these insects are associated with high consciousness and their presence reminds individuals to stay in tune with what’s around them.

Lastly, since not all crickets are alike, if you see a specific kind of cricket, this may indicate that a special kind of good fortune is right around the corner, but more on this in the next section.

3. Is a Cricket’s Color Significant?

Although crickets are often associated with bland colors like brown and gray, crickets come in a range of colors; remember, there are 900 different species!

Your location will largely determine what kind of crickets you see, but if you happen to see a colored cricket in an area where these are not common, this may be a special sign from the heavens. Below are some of the colors crickets come in and what they symbolize:

Since black is often associated with the subconscious, i.e. the thoughts that aren’t at the front of the mind, if you see a black cricket this may be a sign to trust your gut and go with your intuition. Seeing a black cricket may also signal it’s time to reflect on the wisdom you’ve received.

Like most albino creatures, white cricket is rare, which means seeing one is an indication that a lost love will return to your life soon. Perhaps a fractured relationship with a family member will be mended.

Often the color red is associated with dreaming, so if you encounter a red cricket this may mean you’re spending too much time in dreamland and you need to snap back to reality. Take this kind of sighting as a warning sign that it’s time to get back on track.

Yellow crickets are rare, so much so that it’s more likely you’ll see them in dreamland. If you do dream of a yellow cricket, it could be because you’re having trust issues in reality. These trust issues may relate specifically to a relationship.

Additionally, a yellow cricket sighting can be a positive sign, one that indicates success is around the corner.

Looking like a grasshopper, a green cricket symbolizes new life and new opportunities. If you see one after going through a spiritual awakening or rebirth, this is a very good sign, and it’s likely clear skies will be on the horizon.

4. Why Do Crickets Appear in Dreams? 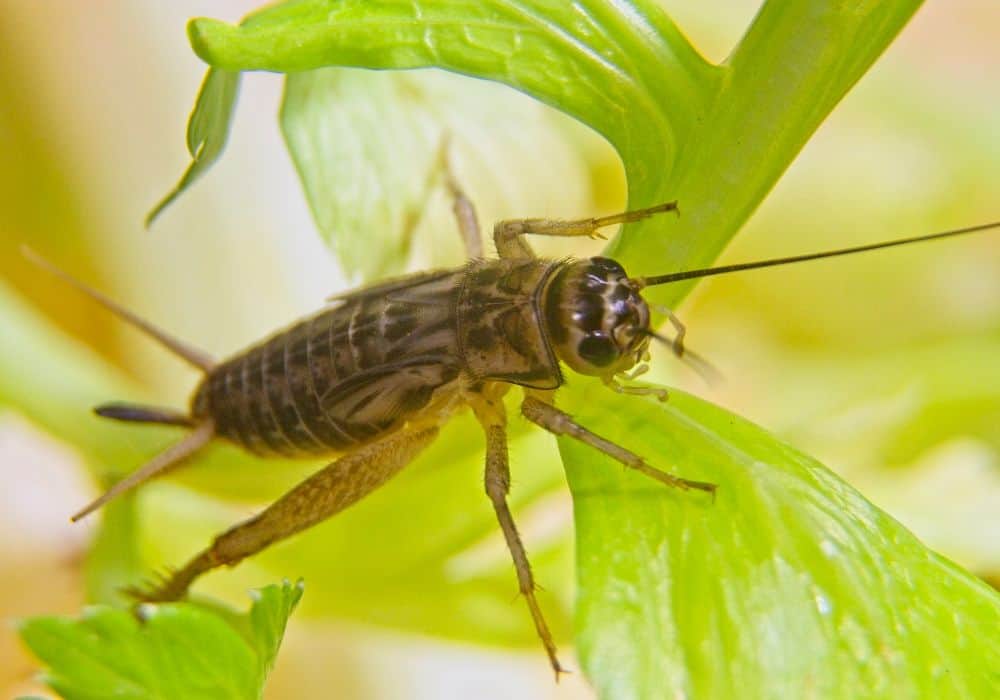 Many cultures believe that a cricket showing up in your dream is no coincidence. But the significance of the dream depends on how the cricket was portrayed and what the interaction was. Here are some possible explanations for why people dream about crickets:

If you hear crickets in a dream, this could be a positive sign. It could be that you’re about to enter a bright new chapter in life. Hearing crickets could also indicate that you’ve found a place of serenity.

Does your dream involve catching crickets? Such can indicate that you’re questioning your intuition and longing for more wisdom. If you’re trying to catch a cricket in your dream and you can’t do so, it’s likely you’re aware that you have much to learn.

Crickets attacking you can be an indication that you are lacking motivation. When you wake from such a dream, it’s time to get back on track and start pursuing goals.

If you dream of crickets crawling all over you then you may be nervous or uneasy while you’re awake. It’s best to address the issue that’s making you nervous so the uncomfortable dreams stop happening.

Watching a cricket jump indicates you’re indecisive and you’re nervous about the future. But this kind of dream does have a positive spin, specifically in that it usually indicates you’ll be able to overcome the challenges you face if you just stay strong.

If you’re having issues in the workplace, you may dream of large crickets. The presence of a large cricket may also be a sign that you’re unwilling to take a necessary risk.

Although it seems like a bad omen at first, a dream involving dead crickets is actually a good thing; such a dream indicates your life is heading in a new and better direction. Having this dream should actually fill you with a sense of accomplishment.

5. What Does It Mean if the Cricket Is Your Spirit Animal? 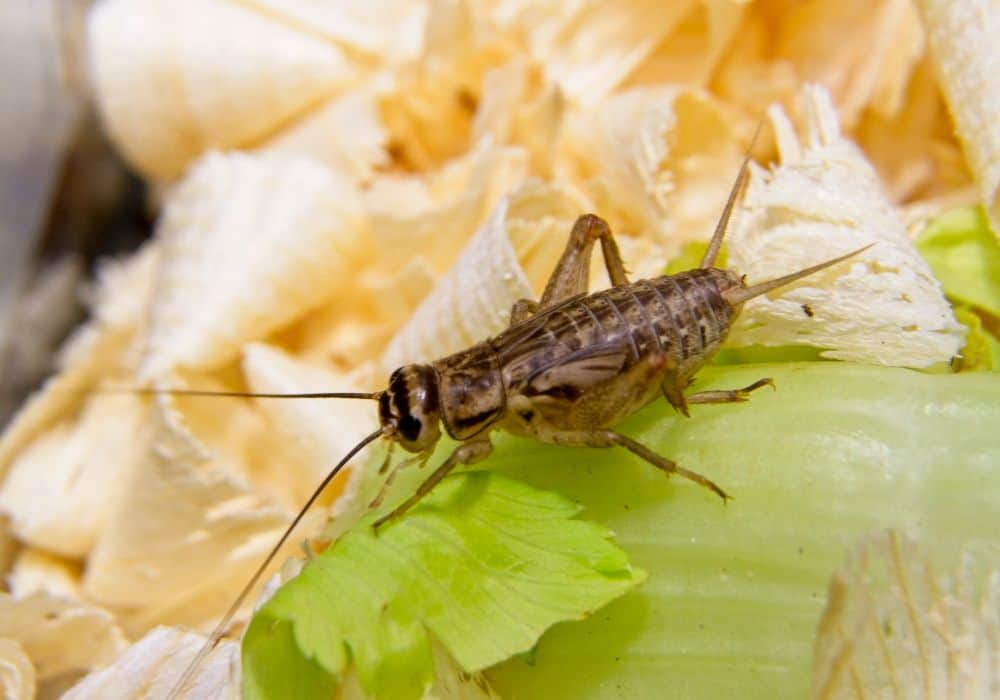 If you have a cricket spirit animal, this means you dream about them frequently, you have profound experiences with them from time to time, and you feel at peace when around them.

It’s definitely beneficial to have a cricket animal totem, for these are associated with other signs of good luck and good fortune, meaning gifts from lady luck may fall into your lap often. Having a cricket as a spirit animal could also mean your intuition is usually reliable.

Since crickets are also associated with wisdom, you may have a cricket spirit animal if you’re an avid learner and somebody who values patience, calmness, and collaboration with others. You could also be a creative problem-solver, one who’s not afraid to reach your goals.

You may need your spirit guide when you’re struggling with making your dreams a reality or when you need clarity. Perhaps you’re having a creative block and you need inner guidance to see a solution clearly.

6. How Are Crickets Portrayed in the Bible?

The Bible doesn’t specifically reference crickets, but it references locusts numerous times, and crickets are closely related to these insects. That being said, Christians do not see crickets the way the Bible portrays locusts, i.e. to be nothing but ravenous and destructive.

7. Why Do Native Americans Think Crickets Are Significant? 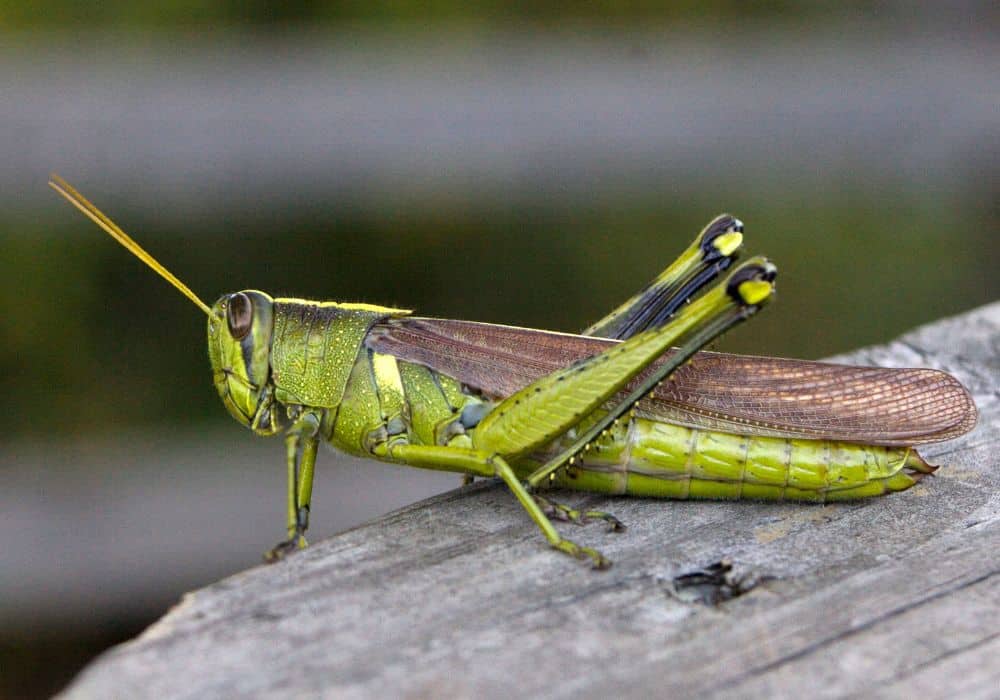 Specifically, the Cheyenne believed the actions of crickets indicated the movement of buffalo herds, and the Cherokee saw the cricket as an insect that was able to overcome any obstacle.

Lots of Native American folklore involves crickets as a symbol of prosperity, and encountering one of these was definitely a positive event (provided you didn’t kill the cricket, either intentionally or inadvertently).

8. How Are Crickets Portrayed in Literature?

Crickets have long been symbolic in books. Take Carlo Collodi’s Pinocchio. In the book, Jiminy Cricket is essentially Pinocchio’s spirit guide, helping him navigate a world he doesn’t understand as a real boy.

Jiminy Cricket demonstrates the good nature crickets are thought to have, and his actions in the book show how help from cricket can bring good fortune. After all, Pinocchio survives being eaten by a whale!

9. Why Are Crickets Symbolic in Eastern Cultures? 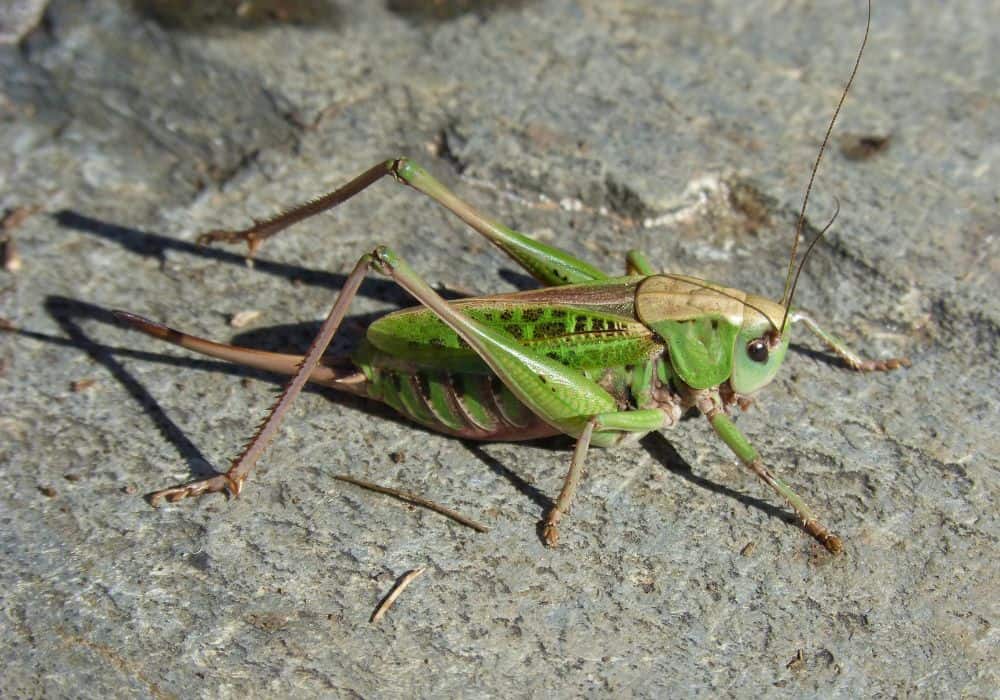 In Chinese mythology, the cricket chirp is a sound that’s associated with good luck. Crickets also go hand in hand with royalty, and an abundance of these would give farmers hope for bountiful harvesting that year.

Eastern cultures also regard crickets as a symbol of fertility, so a woman who sees one may get pregnant soon after. And since cricket chirping was often thought to be easy on the ears in the Far East, a lot of ancient music was inspired by the chirping sounds.

10. Why Are Crickets Symbolic in African Cultures?

Moreover, since male crickets often go above and beyond to mate with females, many African cultures view crickets as symbolic of fertility.

11. Why Did the Celts View Crickets as Symbolic?

The Celts believed crickets were enchanted, and not only did they represent luck but mystery too. Killing a cricket was a damning error, but not because the Celts saw this as a sign of imminent bad luck. Crickets were thought to hold ancient wisdom, so killing one equated to snuffing out that wisdom.

Additionally, those who were afraid of fairies felt comfort in hearing cricket chirping at night, as they believed this scared the fairies away. Some people would even leave milk out on their hearthes as a symbol of appreciation for the crickets.

So the next time you hear a cricket chirping in the night, think about the spiritual meaning of crickets and consider how appreciating this often overlooked insect can do a world of good for your soul. You may even find you have a cricket totem you haven’t gotten in touch with.

1. Are crickets symbolic in European cultures?

Like many cultures across the globe, several European cultures believe that crickets are a sign of good luck and that killing one is a sign of imminent bad luck.

But in Germany, it’s believed that killing a cricket can prevent one’s death. However, if a cricket knows you intend to kill it, it will sneak into your home at night and eat your clothes.

2. What do cricket tattoos mean?

Knowing what crickets symbolize across cultures, a lot of individuals get images of crickets tattooed as a sort of good luck charm. And a person may get a cricket tattoo simply because they’re an insect-lover. Those who appreciate the sounds crickets make also show their appreciation with tattoos.