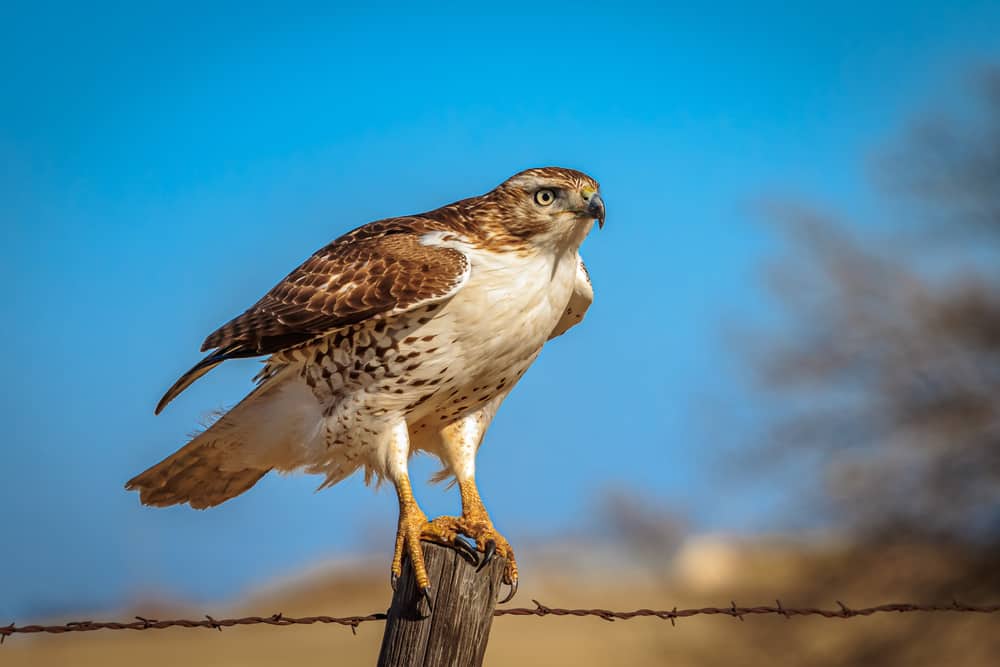 Hawks are a bird of prey that is brimming with so much symbolism, history, culture, and meaning that covering it all in a single article is almost impossible. These noble animals can be found on every continent except Antarctica and as such, they have interacted with almost every human culture we know of.

As you’d expect, as such a common bird with quite awesome characteristics, hawks have sparked humanity’s imagination for thousands of years. What’s more, many human cultures have also found a lot of hidden spirituality in these awesome birds of prey and have used them as inspiration for hunting, war, as well as their day-to-day lives. 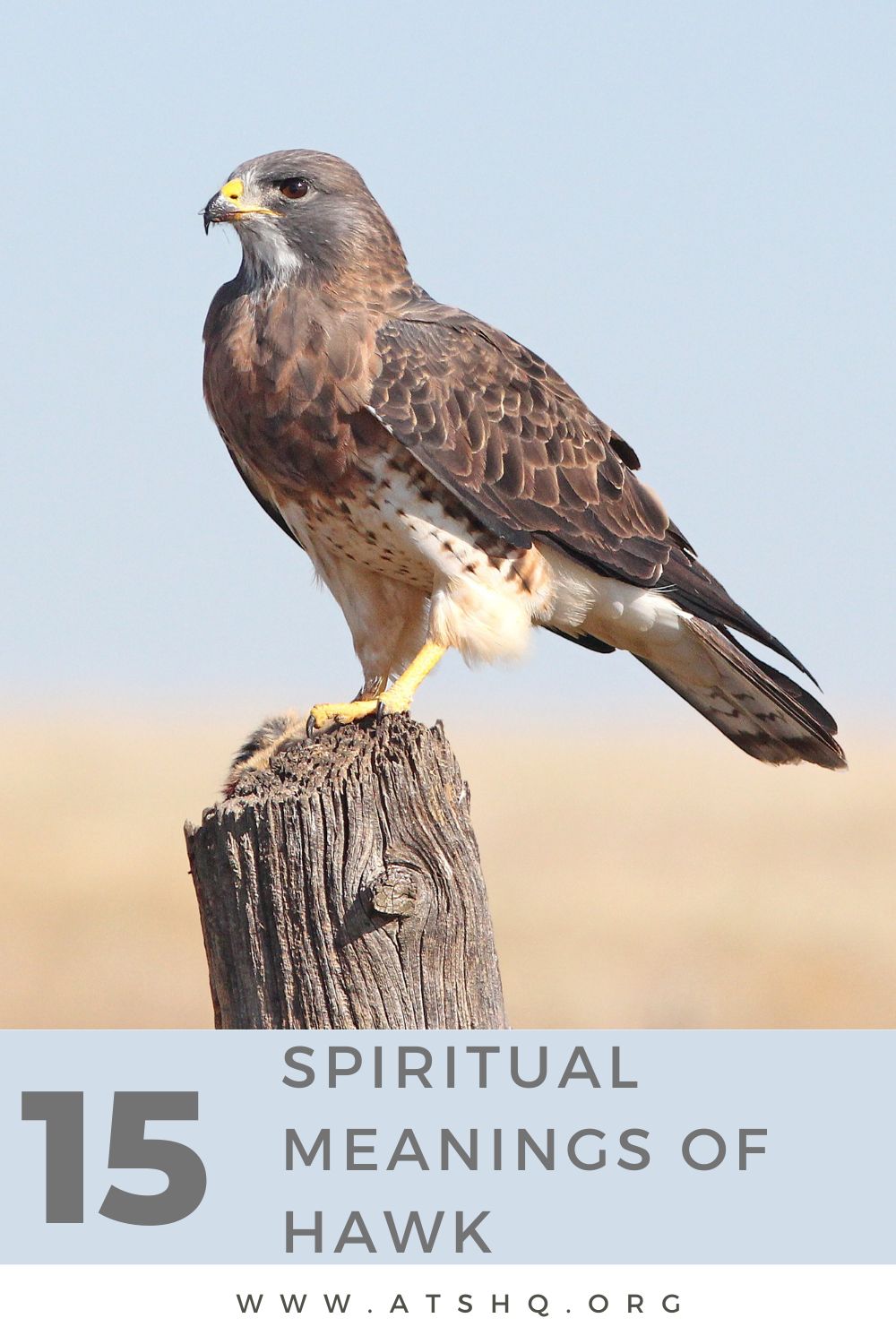 What does the hawk symbolize?

Wild hawks are complex, highly intelligent, incredibly capable, and very special birds. As such, they have been adopted as spirit animals by lots of cultures on the planet. Even for many people today, if a hawk flies up above them in the heavens, that is a clear sign of something special entering their lives. But what exactly? To find out, let’s examine the several main points of hawk symbolism observed by pretty much every culture in humanity’s history.

Hawks are solitary birds and they are also more than capable enough to survive on their own. Not just survive but, as predators, they thrive that way. The only time hawks group up is during and after mating season – in that time, hawks find their long-term monogamous mate with whom they’ve been in previous mating seasons as well, then they mate and raise their new generation of chicks together.

The whole endeavor lasts about three months – that’s all that takes for the female hawk to lay the eggs, then four to five weeks for both parents to incubate them till hatching, and another six or so weeks to feed the young fledglings until they can leave the nest. Once that joint venture is done, both hawks bid each other adieu and spend the other nine months of the year hunting and surviving independently. After that, the monogamous couple comes together again to repeat their dance.

All this is as romantic for couples as it is empowering for singles. Hawks are the type of animal that recognizes the power of monogamous partnership and also values independence. A lot of people find wisdom in this as well as inspiration – hawks show us that we can both be in a long-lasting and stable relationship but also be our own people and never lose our independence.

As some of the most famous raptor birds on the planet, hawks are famous for their daring aerial assaults and the unrelating chases they can perform to get what they want.

What’s more, of the three most famous types of raptor birds – eagles, falcons, and hawks – the latter are most commonly seen hunting not only in open spaces but also in forests and even in cityscapes. The daring high-speed maneuverability of the hawk means that their hunting style is often even more impressive to witness than that of falcons and eagles.

Observing a hawk hunt often inspires a lot of courage, determination, and a feeling of freedom and endless possibilities in the viewer. This is also a big part of what makes the practice of training hawks for hunting so rewarding and enjoyable. 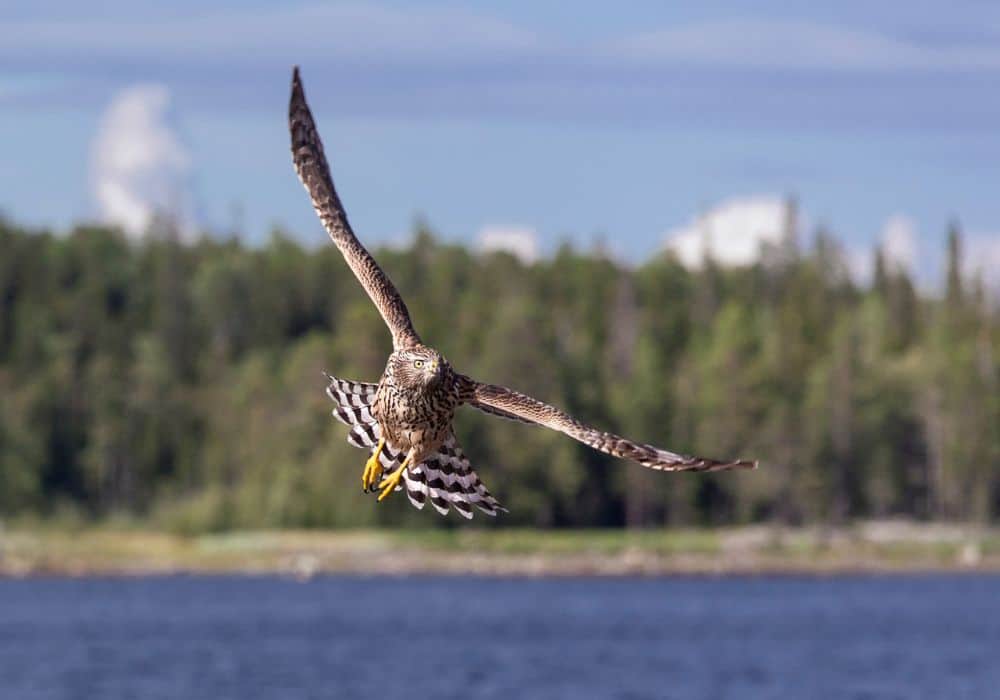 Hawks symbolize a lot of emotions but they also represent intelligence. Their hunting fly patterns often seem based on intuition but these raptor birds are incredibly intelligent and are alongside crows, ravens, and eagles as some of the most intelligent avian species on the planet.

This is evidenced not only by the fact that they can be trained to live and cooperate with humans but even just by their behavior in the wild. Hawks are capable of using tools, like eagles hawks have been seen dropping turtles from up high to break their shells, and hawks in Australia have even been seen starting forest fires to force their prey out of thick forests.

This is a level of intelligence most other animals don’t possess and many people don’t realize hawks have. And, to be honest, it’s often difficult to discern how smart hawks are unless you’ve observed them for a while. That’s because these birds of prey are so well adapted to their preferred lifestyle and hunting patterns that they often don’t need to use and demonstrate their intelligence.

Much like other highly intelligent animals such as killer whales or big cats, hawks are near-perfect predators and would have been that even if they weren’t so smart. In a way, this also makes their intelligence even cooler to witness, however.

Unlike many other predators, hawks are not only perfectly suited for their natural habitat but also very adaptable. Smaller than eagles, more maneuverable than most falcons, and as intelligent as either of them, hawks also still possess their many other awesome traits such as fast flight, exceptional eyesight, and sharp talons. The amazing combination of all these factors makes hawks very easily adaptable to many environments that even eagles and falcons typically stay away from such as urban areas.

In many such areas, hawks live in harmony with humanity and even help with pest control by hunting rats, mice, and other animals humans often try to get rid of. This adaptability is a great reminder to all of us that it doesn’t matter how well specialized you are for your circumstances, you still need to – or can benefit from – be able to adapt when necessary.

Like eagles and falcons, hawks often soar high into the heavens from where they use their fantastic eyesight and powerful wings to spot their prey and swiftly come down upon it. This connection to the heavens, incredibly flight speed, as well as clear sight is often seen to symbolize guidance, clarity, spiritual awareness, and higher consciousness.

Hawks are also often seen as the messengers of the gods or as spirit guides, and having a feather of a hawk can be a great token to remind us of that symbolism.

The eagle is often seen as the avian symbol of leadership and often dons the flags and emblems of many countries and governmental institutions. The hawk, on the other hand, is seen as a symbol of spiritual leadership by many cultures in the world. An encounter with a hawk, especially a white or a red tailed hawk, can be seen as a symbol of guidance, wisdom, courage, and both mental and emotional strength. 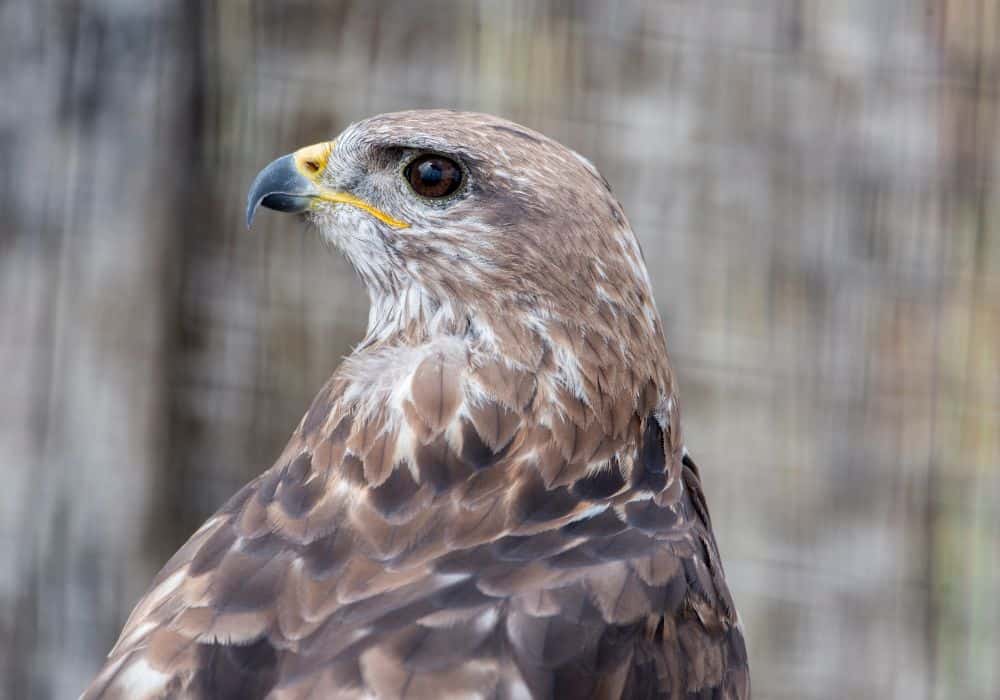 Of course, the various spiritual meanings of hawks aren’t always universal among all cultures even if some aspects of them are. Still, because different cultures and religions have been exposed to different hawk species and under different circumstances, there are quite a few interesting variations one can note. So, let’s go over some of the prime examples of hawk symbolism in various cultures.

Hawks are mentioned quite a few times in the Bible. For example, in Job 39:26 God tells Job Does the hawk fly by thy wisdom and stretch her wings toward the south? The passage is often seen to mean that the hawk’s instincts to fly south in the winter are natural and therefore divinely inspired.

On the other hand, certain Christian interpretations view hawks as strictly materialistic spirits with inherent brutality in them because of the way they hunt. With that in mind, hawks are sometimes associated with troubled souls. The fact that hawks can be trained, however, is seen as a symbol of how anyone can become a Christian.

Hawks are an incredibly popular symbol in most Arabic cultures as well as in Islam. Arabic cultures have been training hawks for hunting for thousands of years and they associate these birds with virtue and heroism. What’s more, hawks are directly associated with the prophet Mohammad in the Quran as well as with his tribe, the Quraish people. The hawk (or sometimes falcon) of Quraish is present on the emblems of many countries in the Arab League.

Hawks were a very widespread symbol among the native Americans of North America before and after the European colonization. Hawk totems were among the most common animals totems seen across the continent and the red tailed hawk is seen as especially symbolic.

The red tailed hawk is also a very potent sign in Native American astrology as a symbol of courage and clairvoyance and its birth sign is typically between the 21st of March and the 19th of April. A lot of Native American clans also named the hawk as a symbol of their clan with some of the most popular examples coming from clans in big tribes such as Pueblo, Iroquois, Menominee, Hopi, Huron, Chippewa, and others.

4. In Mesoamerican and South American folklore

North America wasn’t the only western continent to value the hawk as a symbol. Countless tribes, states, and empires in Mesoamerica and in South America saw the hawk as a sacred bird and hawk feathers as a very potent and sought-after symbol. Many also thought that birds such as the red tailed hawk can travel between the spirit world and the material plane and were used by the Creator to send messages to and from the dead.

Hawks were the symbol of the god Apollo in Greek mythology. As a sun god as well as a god of dancing, music, and prophecy, Apollo was even able to turn himself into a hawk. He displayed this ability once when he flew by Mount Parnassus and caught Daedalion from falling and taking her own life out of grief for her lost daughter Chione. 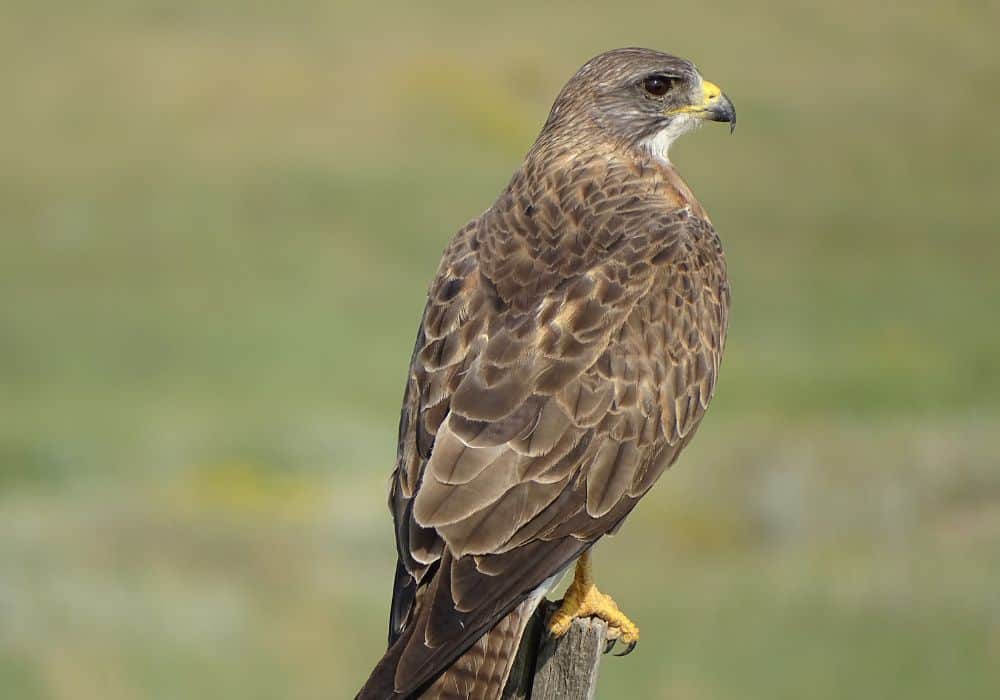 The hawk was even more prominent of a symbol in ancient Egypt than it was in ancient Greece. In the land of the Nile, the hawk was associated with the god Horus, one of the several deities to hold the throne of Heaven at one point after his father Osiris and other famous gods such as Ra and Amun. Because of Horus, the hawk was thought to bring good fortune to the warriors in battle as well as to symbolize courage and wisdom.

From one end of the world to the other, hawks are very respected in the Aboriginal Australian cultures as well. There, the Fire Hawk is said to be the one to have brought fire to the people – a myth that makes even more sense now that we’ve seen hawks actively start forest fires to flush out prey.

The hawk is the symbol of the Shyena in Hinduism – a divine messenger that’s also associated with the Hindu fire deity Agni. In the Hindu Vedas, Shyena is the one that ascends into the heavens to bring back down soma, the divine nectar that can rejuvenate all life. This further shows how hawks are often seen as a symbol of divine power and as messengers between gods and men.

Hawks aren’t a popular symbol just in the Saharan Arabic world and in Egypt – they are also very popular in sub-Saharan Africa. There, the hawk symbolizes faith in the gods, as well as of causes worth fighting for and of the courage needed to do so. Many cultures believe that dreaming of a hawk means you’ll soon be at a crossroads and will have to take a major life decision or undergo some kind of trial.

Having a hawk spirit animal, whether as a hawk tattoo or just in your mind and soul can be a very potent thing. The hawk power animal brings a lot of great qualities with it and can inspire us to achieve great things in life. Every person can find a different hawk spiritual meaning to hold on to and benefit from but every type of hawk symbolism is derived directly from the nature of these magnificent birds, how they interact with the world around them, and the lessons they teach us.