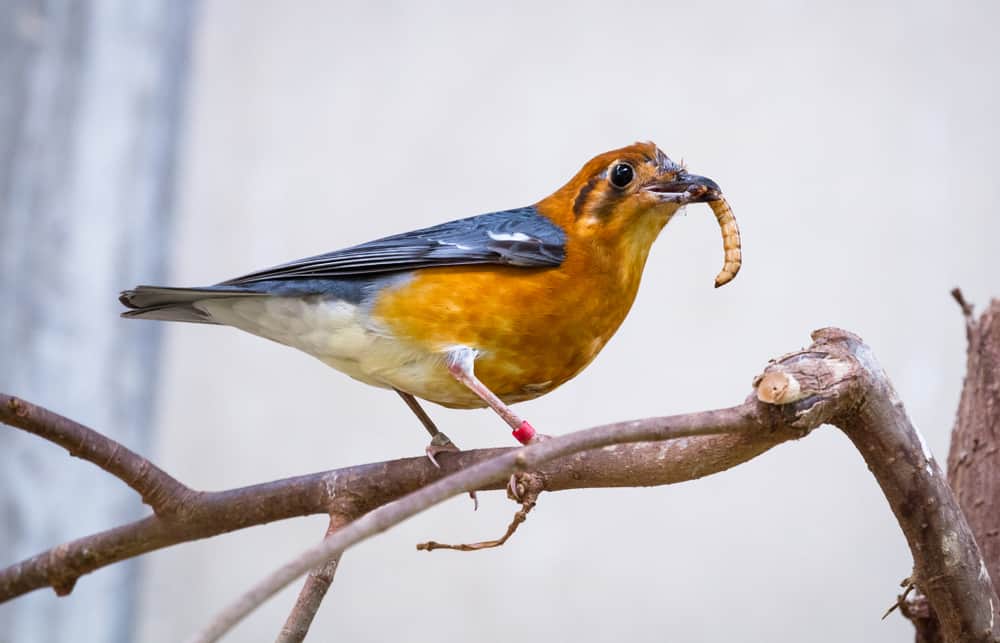 Mealworms are famous as fantastic pet food for birds, reptiles, amphibians, and fish alike as they are easy to store, highly nutritious, and lots of species find them to be irresistibly delicious. Are they the right food for your particular pet bird or backyard bird guests, however, or is there something better you should put in the bird platform feeder? Here we’ll go over what birds eat mealworms and how exactly you should feed them.

Like many other animals we call that way, these notorious “worms” aren’t actually worms but are the larvae of the mealworm beetle, i.e. the Darkling beetle (Tenebrio molitor). As the larvae of insects, mealworms are fantastic natural food sources for proteins, fat, and fiber which are key for many birds, especially young ones that have just hatched from their eggs.

As larvae, they also don’t really get all that long – usually not more than 1.5 inches (3.8 cm) before they move on to the pupal stage – but you are supposed to give them as a treat to your feathery pet before that. You can also see mealworms called “golden grubs” because they are technically insect grubs and they have a golden or yellow color.

How to look after mealworms?

Feeding your pet with insect larvae can sound complicated but mealworms are actually widely available in pet and fishing stores. That’s because they are used as both pet food and fishing bait. So, all you need to do is go to the nearest store and get as many mealworms as you want.

The mealworms will typically be sold in a plastic container – all you need to do from there is feed the worms something nutritious to keep them both alive and well-stuffed.

The other thing to note is that you’d want to feed the worms to your birds before they’ve started going into their pupal stage. Fortunately, the larval state of mealworms lasts as long as 90 to 114 days – longer even than their life as actual beetles.

During that time, however, mealworms will not only need food and grow but they will also shed their husks as they get too big for them. A golden grub will do this shedding week or week and a half for a total of 10 to 14 sheddings during its larval stage. So, if you don’t want to have to clean worm husks, you’ll probably want to get small quantities of mealworms and feed them in the span of a week before getting a new batch.

Fortunately, while mealworms prefer moderate temperatures to thrive, they can actually survive in temperatures as low as 4o Celsius or 40o Fahrenheit which is why a lot of people keep them in refrigerators. That’s usually done when you want the mealworms as fish bait, however – if you want them as pet food you probably want them to be as healthy and well-fed as possible so that they are healthy for the birds.

Also note that if you don’t want to bother with live mealworms, you can always just buy dried mealworms instead and dump those in your bird feeders. Some people even melt the dried worms into suet for a nice bird dish. As long as you’ve bought them from the right place, dried mealworms are also a highly nutritious bird food. Most big pet stores sell them as do many online stores. One good example, if you’re looking for a recommendation is Pennington which is available even in many convenience stores. 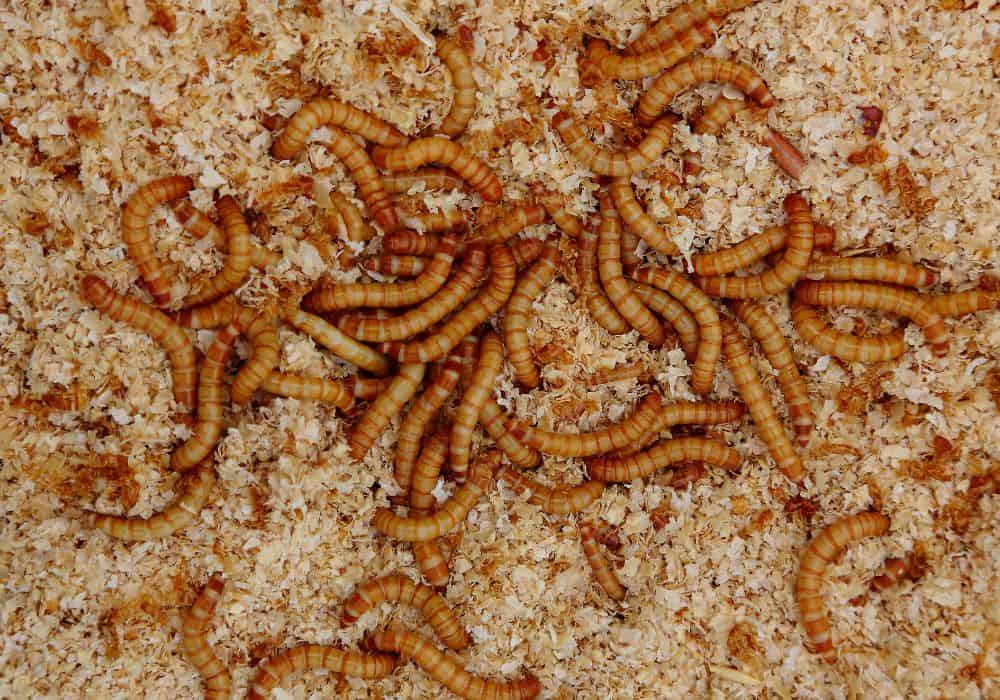 How to feed mealworms?

If you are set on dealing with live mealworms, you can rest assured that the process is pretty simple – all you need to do is drill a few small holes in the lid to make sure that the moisture levels are just right and then toss some worm food in the box to keep the worms fed. This can be a carrot slice, some apples, potatoes, or nuts.

Mealworms can typically feed on almost any organic material, whether it’s fresh or decaying. However, as you’re raising yourself to be highly nutritious bird food, you’d want to feed them well so that your birds are well-fed in turn. So, toss sp,e grains, seeds, nuts, fruits, and veggies in your mealworms’ container and everything will be fine.

From there – just toss them on the mealworm feeder when your birds need feeding and that’s it.

Generally speaking, all bird species can be fed with worms and insects – they are highly nutritious, delicious (for birds), and a very easy prey/pet food. That being said, many birds have other preferences, be it for fruits and nuts or for larger prey. So, depending on the breed of your bird, the mealworm meal may not be greeted with a lot of enthusiasm.

The birds that truly enjoy mealworms, however, are typically the so-called “backyard” varieties. These are birds often seen in people’s backyards in North America and Europe, and as such – they are a favorite of many amateur bird watchers as you can literally feed and look after wild birds in your backyard as if they were your pets. Here are the 20 most common types of backyard birds you can see in the US, Canada, South America, Europe, Asia, Africa, and Australia: 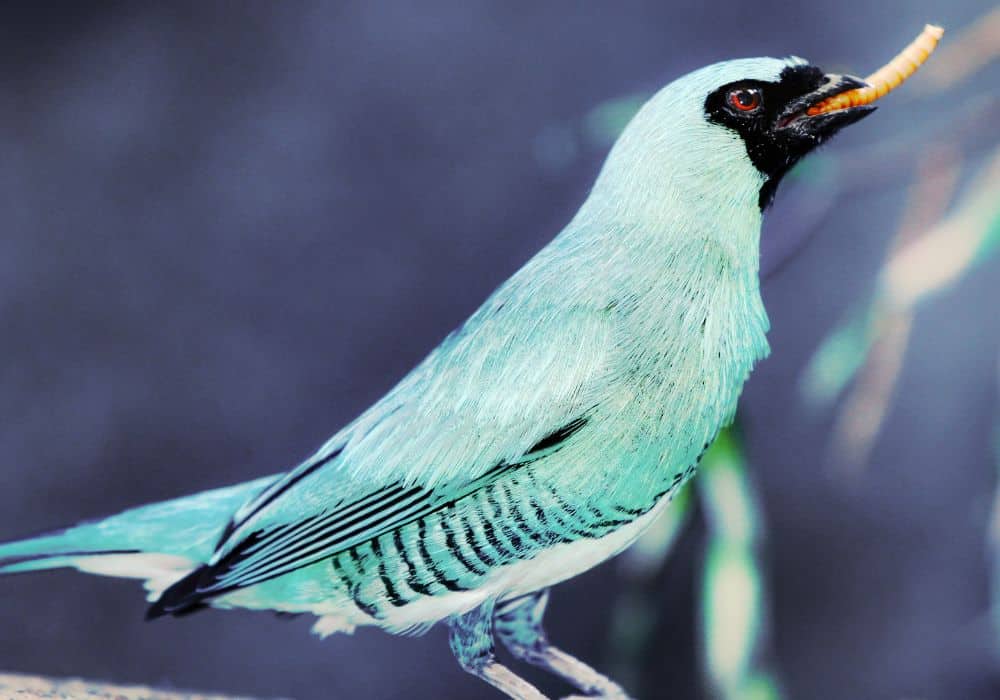 All in all, mealworms make for fantastic food for many bird species but are absolutely ideal for backyard birds. Easy to get, feed, raise, and contain, mealworms are also a pretty easy type of food to handle, even if many first-time bird owners/feeders get weirded out by the idea of keeping boxes with worms in their homes.