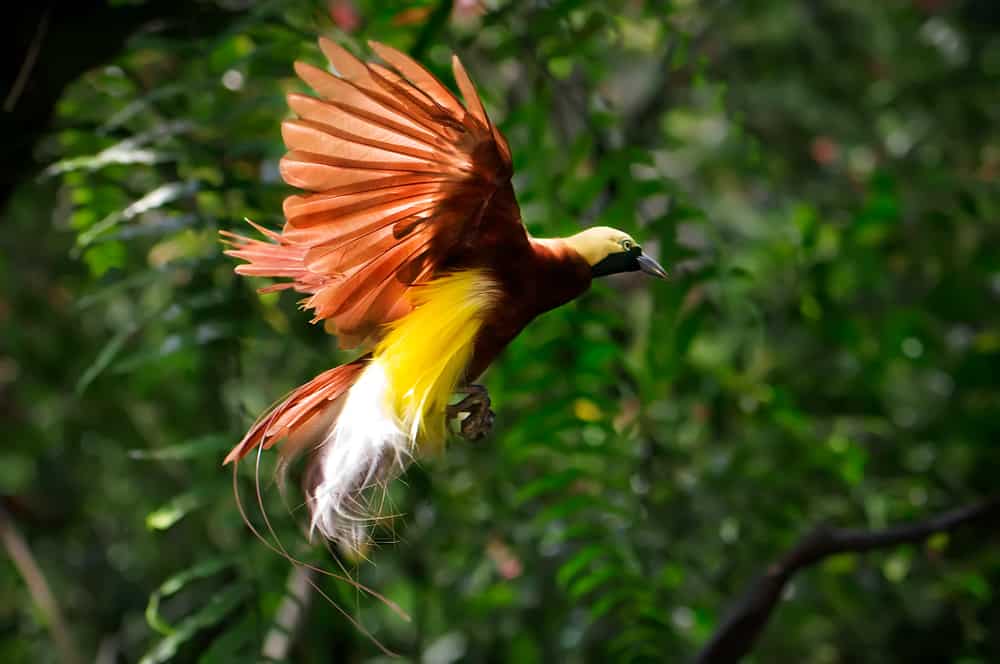 New Guinea is home to some 700 species of birds. You might say it’s a bird paradise, but not every bird native to the island is thought to belong to the paradise. Only species called birds of paradise are seen as sacred and heavenly, originating from the realm above Earth.

In this article, we’re going to explore the symbolism of birds of paradise, see what they represent in native New Guinea tradition, what they’ve come to represent in Europe, and investigate strong connections to Arabian mythology. 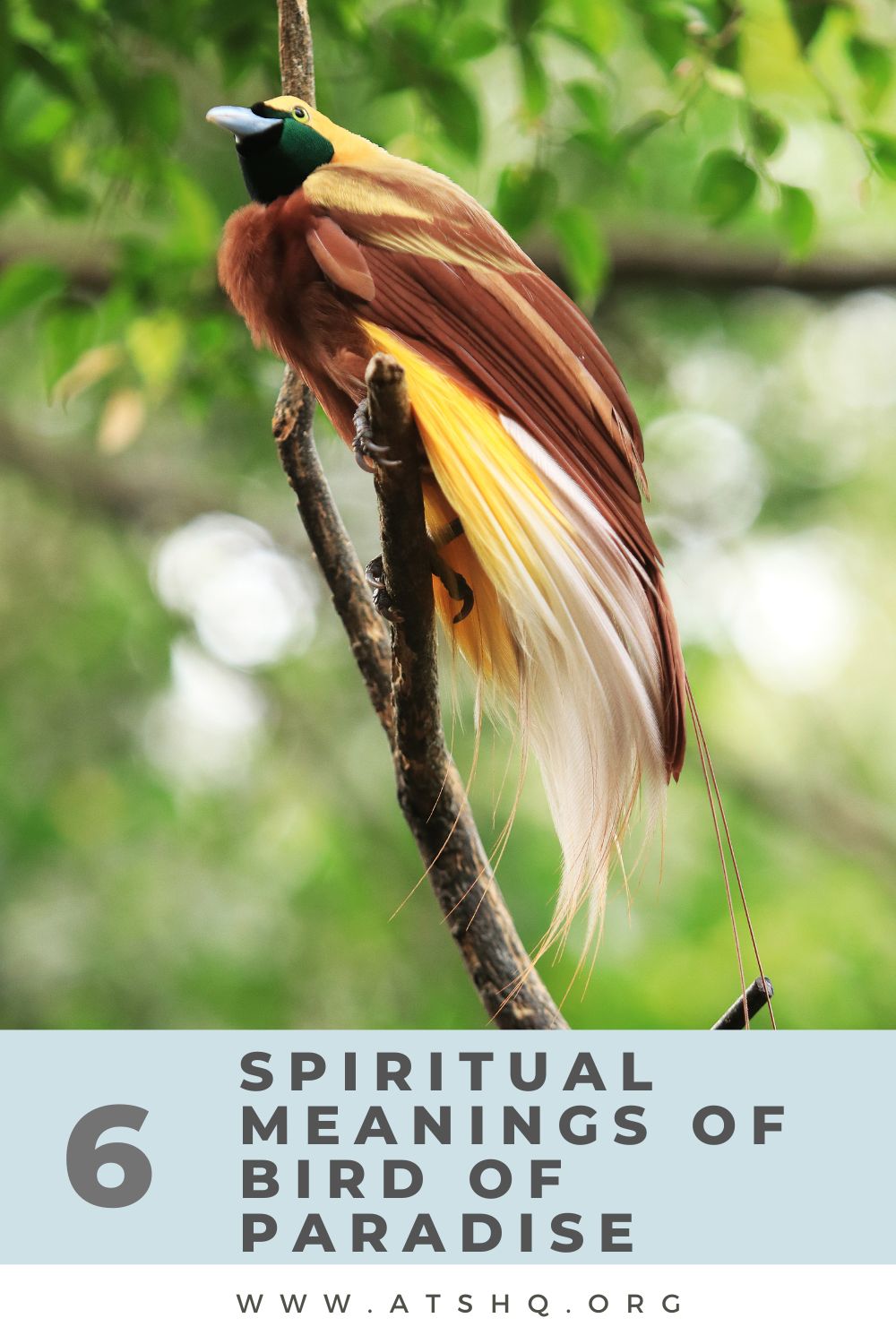 There are over 40 bird species that are called “bird of paradise”. What all of them have in common is that they’re native to New Guinea, the biggest island in Oceania and the Pacific Ocean. Native groups of the island have a deep-rooted relationship with these birds spanning several millennia. Before we explore that, let’s take a look at the birds themselves.

Males of most birds of paradise species exhibit incredibly unique plumage, which features multiple bright colors and appears to shimmer. However, juvenile males are very similar to females, carrying bleak grey or brown feathers with no fabulous color of the mature males.

As the bird matures, it starts producing more pigments that start coloring the feathers, which begin building the incredible plumage. Males use their beauty for a mating dance during courtship, aiming to attract potential mates.

The mating dance consists of three elements: color, sound, and movement. However, mature birds of paradise can’t attract females as soon as they hit puberty. First, they need to learn how to perfectly combine all three elements into a coherent dance that will leave females impressed.

Only after mastering the use of their plumage male birds can attract partners and produce offspring. Most species of birds of paradise are polygamous, and some species are monogamous. Most interestingly, only the polygamous species evolved incredible plumages, while monogamous males look like females.

Among the people of New Guinea, it’s thought that birds of paradise come from the sacred realm, and are responsible for the creation of the human world. Anthropologist Gillian Gillison studied New Guinea tribes for over a decade, living among the tribesman for the majority of the time.

She recorded one tribesman saying a belief that’s shared among many natives of the island:

“The people of my family are birds of paradise.”

This quote is explained by a common myth told by many tribes of New Guinea. According to the legend, a young distressed girl placed her recently deceased brother’s corpse into a tree hollow.

As she struck the tree trunk with tears running down her cheeks, a bunch of birds gushed out, some upwards like smoke, symbolizing bleak species that live in the highlands of the island, and some downwards like fire, representing colorful lowland species.

Feathers of Birds of Paradise

Many pieces of traditional New Guinea outfits were adorned with feathers, tails, and skins of birds of paradise. Wearing such an item, for example, a headdress brings the person back to the paradise which our world once was.

New Guinea tribesmen call the mating ritual of birds of paradise the same word they call their dance of war – cakalele. The dance of war is a native ritual used for celebrating a successful raid or victory in a battle. Men wearing warrior outfits (which often were adorned with colorful feathers of the birds) would perform a theatrical dance representing their victory.

Many tribesmen believe that having a piece of a bird with them in the field of battle invites the birds to protect them. As birds of paradise are seen as sacred ancestors, their feathers symbolize the strength and power of the divine, helping the warriors in the duel.

The feathers also represent fertility due to the highly sexual nature of the mating dance of these birds. Clothing, especially headdresses decorated with colorful feathers of the birds would be used as a bride price. It was thought to help evoke the fertility of the bride.

There’s also a ritual where young women would dance holding each other’s hands forming a circle. Then, older women of the tribe would give trophy heads adorned with bird of paradise feathers to the young women, and join in the dance. The ritual would intensify and women would start yelling, shouting, and screaming, entering a trance state that manifested fertility. 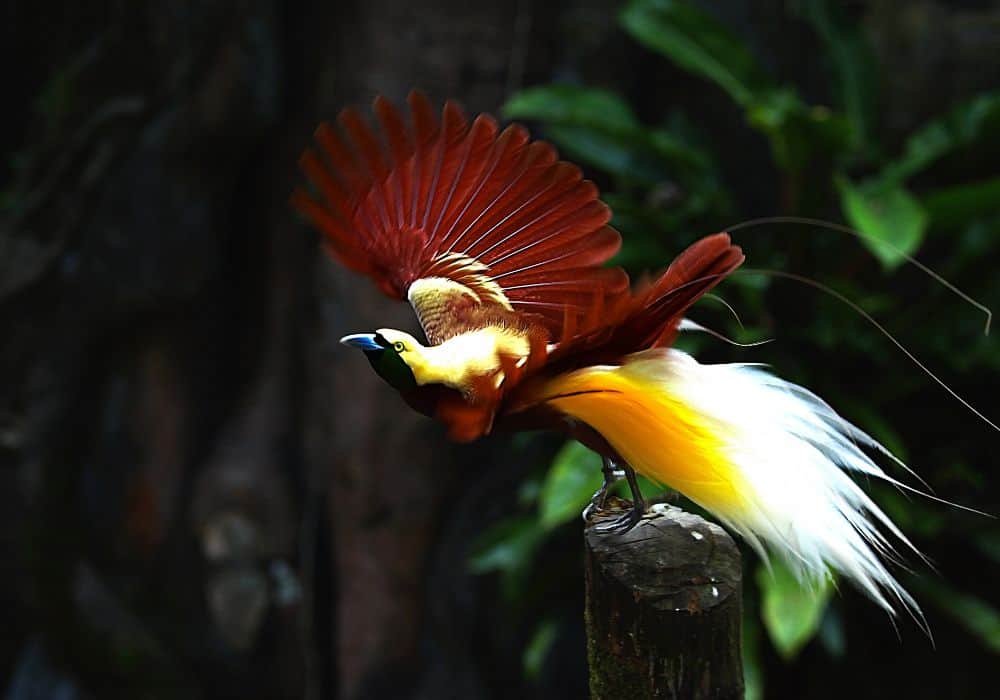 While not inhabiting Europe, birds of paradise have a significant place in European symbolism. Europeans first encountered these birds in the 16th century, when Portuguese explorer Ferdinand Magellan brought their skins back home. Malay tribe chiefs gave them as gifts to Western Kings because it was the supreme commodity.

Europeans believed that these birds come from the spiritual realm above Earth, as the skins came without feet and wings which were trimmed. It was thought that these birds were carried by wind and never landed on the ground, thus not needing wings nor feet.

It even influenced the scientific name of one of the birds of paradise called Paradisaea apoda, the species name meaning “without feet” in Latin.

Another European explorer, Antonio Pigafetta from Venice, also led voyages to the Spice Islands, visiting New Guinea and encountering birds of paradise himself. He wrote:

”The people told us that those birds came from the terrestrial paradise, and they call them bolon diuata, that is to say, ‘birds of God”.

The paradisal connection quickly established itself in Europe, and Europeans called the birds some variation of ”birds of paradise”. For example, the Portuguese called them “Passaros de Col”, meaning “Birds of the Sun”.

As it was thought that these birds inhabit the heavenly realm and only reach Earth after dying, some Christian teachers took the legend and used it for their sermons. Priests would liken the birds to Adam and Eve, the first humans and the first sinners, who were banished from the Garden of Eden for eating the forbidden fruit of knowledge.

The birds of paradise even inspired the colloquial name of a flower native to South Africa. There, it was called the crane flower, but in Europe, it carried the name of the bird of paradise flower, because some plants of this genus have 3 blue petals that form a shape reminiscent of the birds.

Sir Joseph Banks researched these flowers and gave them the scientific name Strelitzia. It was derived from the fact that Queen Charlotte, a lover of these flowers, was a nobility of the Grand Duchy of Mecklenburg-Strelitz.

Just as the accessories adorned with birds of paradise feathers and skins became popular in Europe, so the flowers were grown in nearly every royal garden of the continent.

For hundreds of years, the skins and feathers of these birds remained incredibly rare and valued in Europe. Most voyagers and traders sailing as far as New Guinea did it for the spices, not for bird trimmings. It led to birds of paradise symbolizing exclusivity, novelty, and beauty.

Articles decorated with birds of paradise feathers were extremely expensive in Europe. They were scarce and only the richest of the aristocracy could afford such items. As a result, it came to represent wealth and status.

The scarcity situation slowly changed. Many native Malay tribesmen started massively hunting birds of paradise for their skins and feathers. Newly brought weapons by Europeans, that is gunpowder guns made the job much easier.

It’s estimated that by the early 1900s, over 80,000 skins of these birds were imported to Europe, primarily for women’s hats and accessories. It resulted in accessories made of or adorned with trimmings of the bird losing the prestige of exotic luxury it once had. 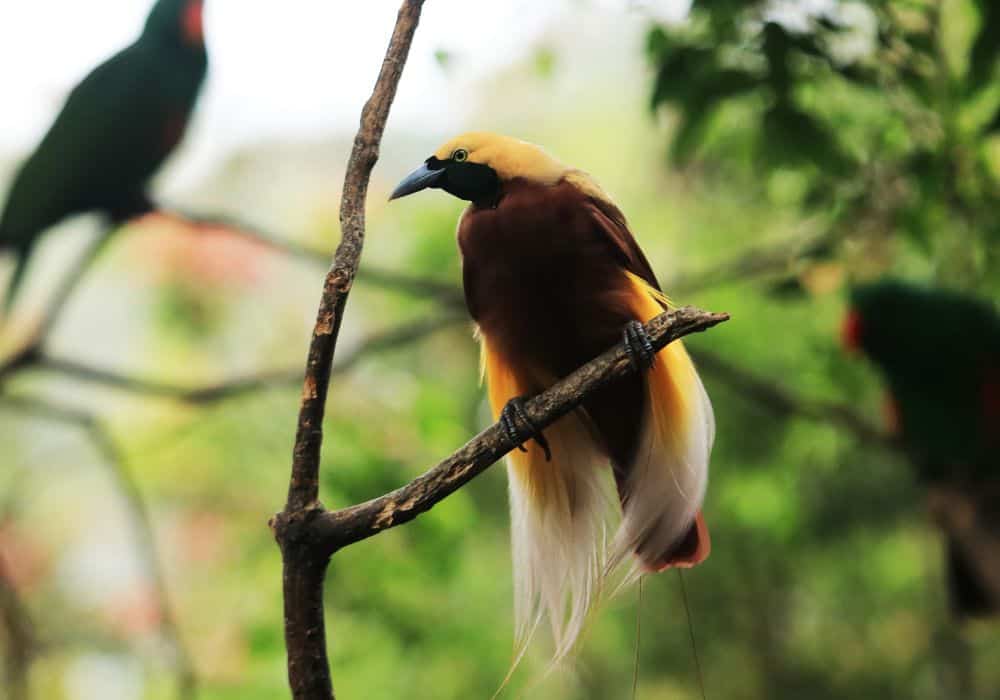 In the Middle East and surrounding regions, there are many tales about the sacred bird called Huma. The name is said to come from the Arabic words هُوَ (“hu”, meaning “spirit/God”) and ماء, (“ma’a”, meaning “water”).

However, stories of Huma predate the first birds of paradise in Europe by hundreds or even thousands of years. It’s one of the most important sacred beings in Suffism, a branch of Islamic mysticism, and in Persian mythology.

It’s said that just seeing the shadow of the Huma bird brings fortune for the rest of one’s life. Those that were touched by Huma bird were destrined to become great leaders and rulers. According to some legends, the Huma bird is similar to a phoenix, as it’s said that every few hundred years it sets itself on fire and burns to the ashes, before arising new, symbolizing the start of a new era.

Similar birds of paradise can even be seen in Zoroastrianism, a Persian religion that promoted the sacred drink haoma. It was made from a divine plant of the same name and brought from the heavenly realm to Earth by birds of paradise, possibly inspired by older myths of the Huma bird.

Birds of paradise include some of the most beautiful bird species in the world. It’s no wonder that native New Guinea tribes came to see these birds as spiritual ancestors that belong to the realm of the divine.