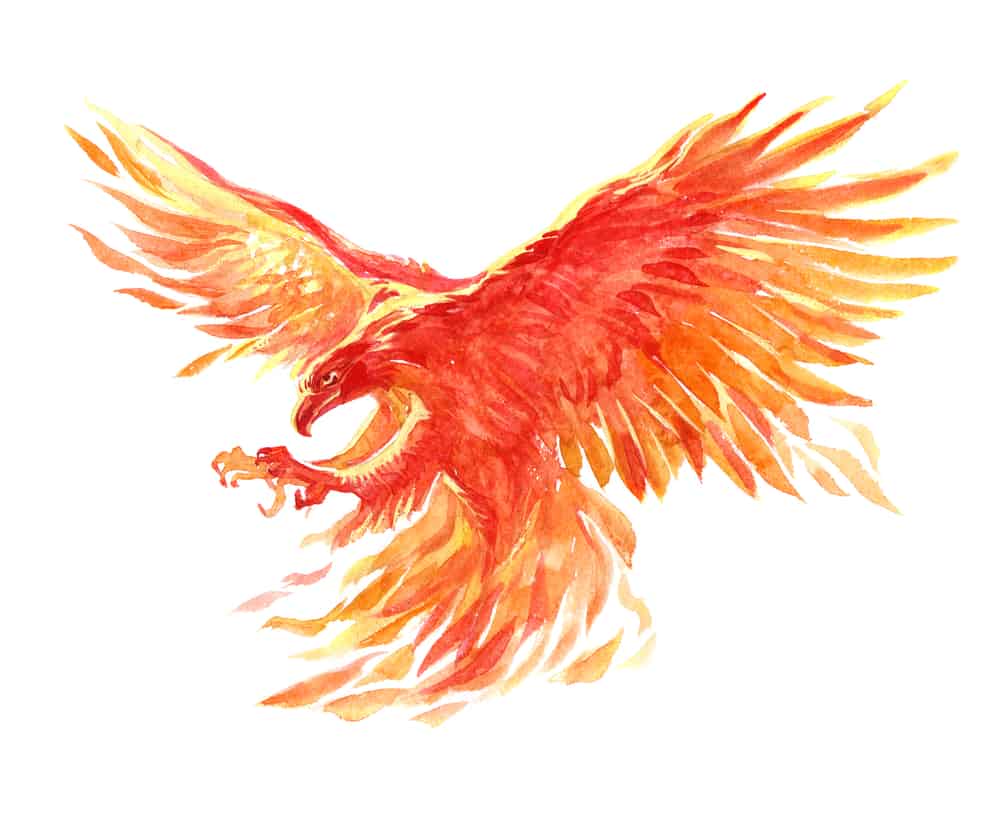 The phoenix is a mythical bird that is very popular among many civilizations. According to legend, the phoenix has a very long lifespan, and when it is time to die, it sets itself on fire. Then, a new phoenix is reborn from the ashes a few days later.

Due to its popularity, the phoenix often features in plenty of mythological tales. It also holds many different symbolic meanings in dreams, tattoos, and spirituality. So, what does the phoenix really represent? And what can we learn from the cycle of life of this mythical bird?

In this article, we’ll thoroughly examine the symbolic meaning of the phoenix in the mythology of several ancient civilizations. We’ll also determine the meaning behind the appearance of the phoenix in different aspects of our lives.

Keep on reading to learn more about phoenix symbolism! 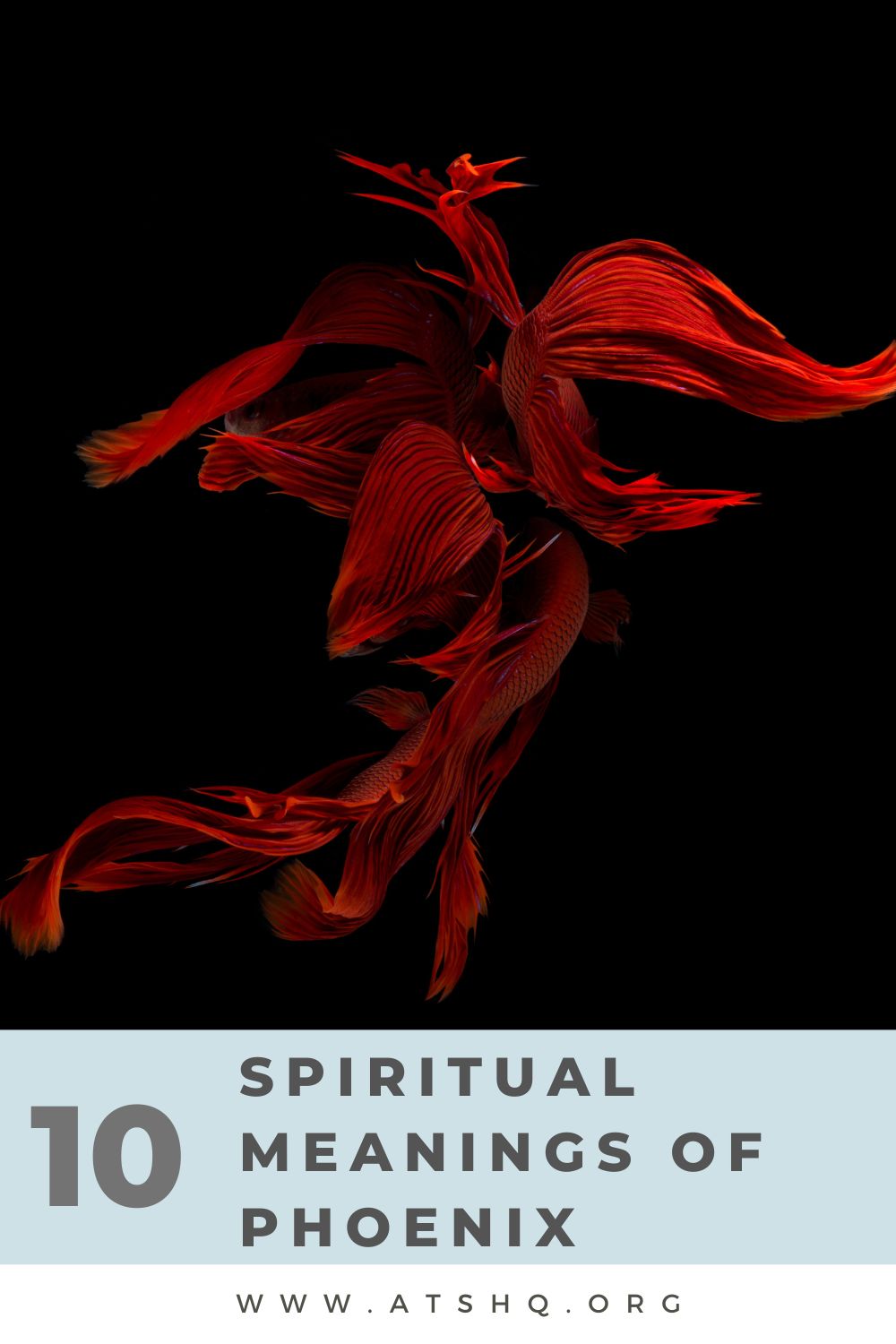 There are several theories regarding the origin of this mythical bird. The most popular one is that flamingos inspired the phoenix myth. Flamingos would create their nests in salt flats which were very hot. The heat that emanated from the water would make their nests look like they were on fire.

Another bird that is comparable to the phoenix is the similarly-sized and colored peacock. In Chinese folklore, the depiction of the phoenix resembles the Asian ostrich. Others believe that the golden pheasant is the closest bird to a phoenix; however, their sizes don’t match.

A bird that’s similar in size to the phoenix is the eagle. While most eagles don’t share the same colors as a phoenix, some have blue and purple feathers, just like the mythical bird.

One of the first myths about the phoenix was born in Ancient Egypt. According to the myth, the phoenix was a large majestic bird that traveled the world. When the Sun God Ra spotted it, he was so impressed by its beauty that he decided to grant it immortality.

However, the phoenix’s body began to deteriorate as the years went by. The Sun God showed mercy and guided the bird to fly towards the ancient city of Heliopolis (which means city of the sun in Greek). There, he ordered the bird to build a nest out of a specific type of wood and spices.

When the phoenix finished building the nest on the top of the Temple of the Sun, the Sun God lit it on fire and burned the phoenix. A few days later, a new bird was resurrected from the ashes to start a new life cycle. Every five hundred to a thousand years, the phoenix dies and is reborn from its ashes.

During the 19th century, this story began to gather suspicions. Eventually, it was discovered that the people of Heliopolis had altered the story of the Bennu to create the myth of the Phoenix. Bennu was a deity that resembled a large heron bird and is believed to carry the soul of the Sun God Ra.

The phoenix was a significant bird for the ancient Greeks. After all, the name “phoenix” originates from a Greek word that means red or purple, just like the colors of the phoenix feathers.

It is believed that the Greeks were aware of the mythical bird many centuries ago. The first written mention of the phoenix is a riddle by poet Hesiod, which regards it as a known entity. The riddle associates the phoenix with the passage of time and immortality.

The legend about the origin of the phoenix was first written by the famous Greek historian Herodotus. During his travels to Egypt, he learned about the tale from the citizens of Heliopolis. However, the historian was not convinced about the legend’s credibility since it talked about a yellow and red bird without mentioning fire.

The Greeks often depicted the phoenix as having a halo that consisted of seven rays, similar to Helios, the Greek personification of the Sun. The phoenix ashes have also been credited with having healing powers, although Pliny the Elder was not convinced about this. His reasoning was that a medicine that was available only every 500 years was impractical.

Ancient Romans were particularly fond of the phoenix. They associated the bird’s immortality with the longevity of their empire. Every time a new emperor was crowned, it represented the Eternal City’s rebirth, just like the phoenix. The phoenix was also present on the back of Roman coins, which proves the bird’s significance even more.

The Romans had many interpretations for this mythical bird, all of which were recorded by the famous historian Tacitus. Despite the differing opinions about the size or color of the phoenix, most agreed that it was related to the sun.

Tacitus’ sources claim that the phoenix’s rebirth process differed from what the Egyptians or Greeks claimed. When the phoenix was ready to die, it would produce offspring, which was responsible for cremating the older bird. 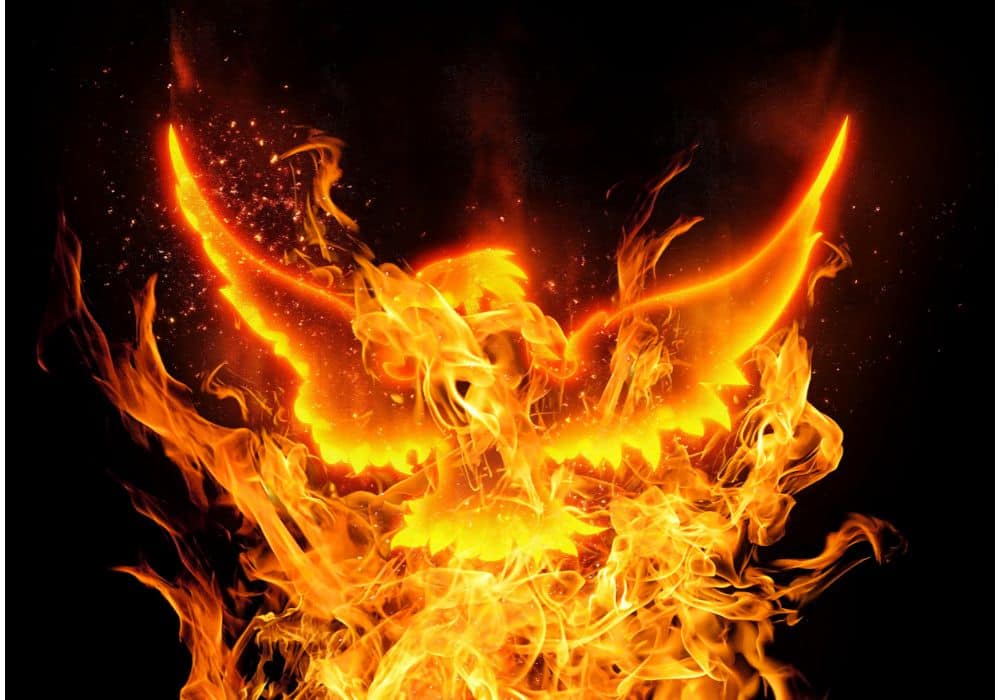 Despite the belief that the legend of the phoenix was developed by the Greeks, this mythic bird still held great importance to other civilizations. The phoenix was so significant in Native American culture that it became a symbol of the first Great Seal of the United States in 1782.

They also believed that the bird’s feathers had mystical powers and could heal people, as well as grow crops. Thus, the phoenix symbolized healing, power, and growth for Native Americans.

Christianity began to emerge while the Roman Empire was dying down. Therefore, it was easy for Christians to connect their story to the phoenix’s birth from its ashes. Not to mention that the legend of the phoenix’s resurrection shares similarities with the resurrection of Jesus.

There is also a connection between the phoenix and the Garden of Eden. According to the myth, Eve attempted to feed the forbidden fruit to all animals in the Garden. However, the only one that refused to eat was the milcham or hol, which is similar to a phoenix. Thus, it was rewarded with the gift of immortality.

The phoenix is also related to the Garuda, a very important deity in Hindu mythology. According to legend, the Garuda gained immortality through its heroic actions to save its mother. Like the phoenix, the Garuda is a sunbird with beautiful feathers that also serves as a vehicle for the god Vishnu.

The biggest accomplishment of the phoenix is the fact that it has the courage to burn itself down to be reborn. No matter how hard or painful it might seem, it trusts the process and follows through with it.

This is actually the most important lesson one can learn from this mythical bird; life is full of struggles and seemingly impossible tasks. However, if you show bravery and face your fears and demons, you will be rewarded with a fresh beginning.

Since dreams often represent reality or give us the motive to take action, a phoenix in your dream might signify that you need to face a challenge. No matter how difficult it might be, take courage just like the phoenix and fight against anything that’s holding you down.

Another interpretation of the phoenix, particularly if it seems exhausted, is that you might be overworking yourself. While you should always strive to be the best version of yourself, you should also take proper care of your mind and body. If you don’t look after them, they might impede you from achieving your goals.

A person usually gets a tattoo of a phoenix to indicate a fresh start. Just like the phoenix who is reborn from the ashes, an individual might be starting a new journey after facing some difficulties.

These difficulties might be the ending of a long relationship or friendship, or even more significant, a severe illness or the death of a loved one. In any case, for them, the phoenix symbolizes the courage they had while going through these adversities.

Another interpretation of the phoenix tattoo is that of the neverending flames that burn within you. The phoenix is a bird that is associated with light, fire, and immortality. Just like this mythical creature, your inner fire will always burn and fill you with love, passion, and dedication. 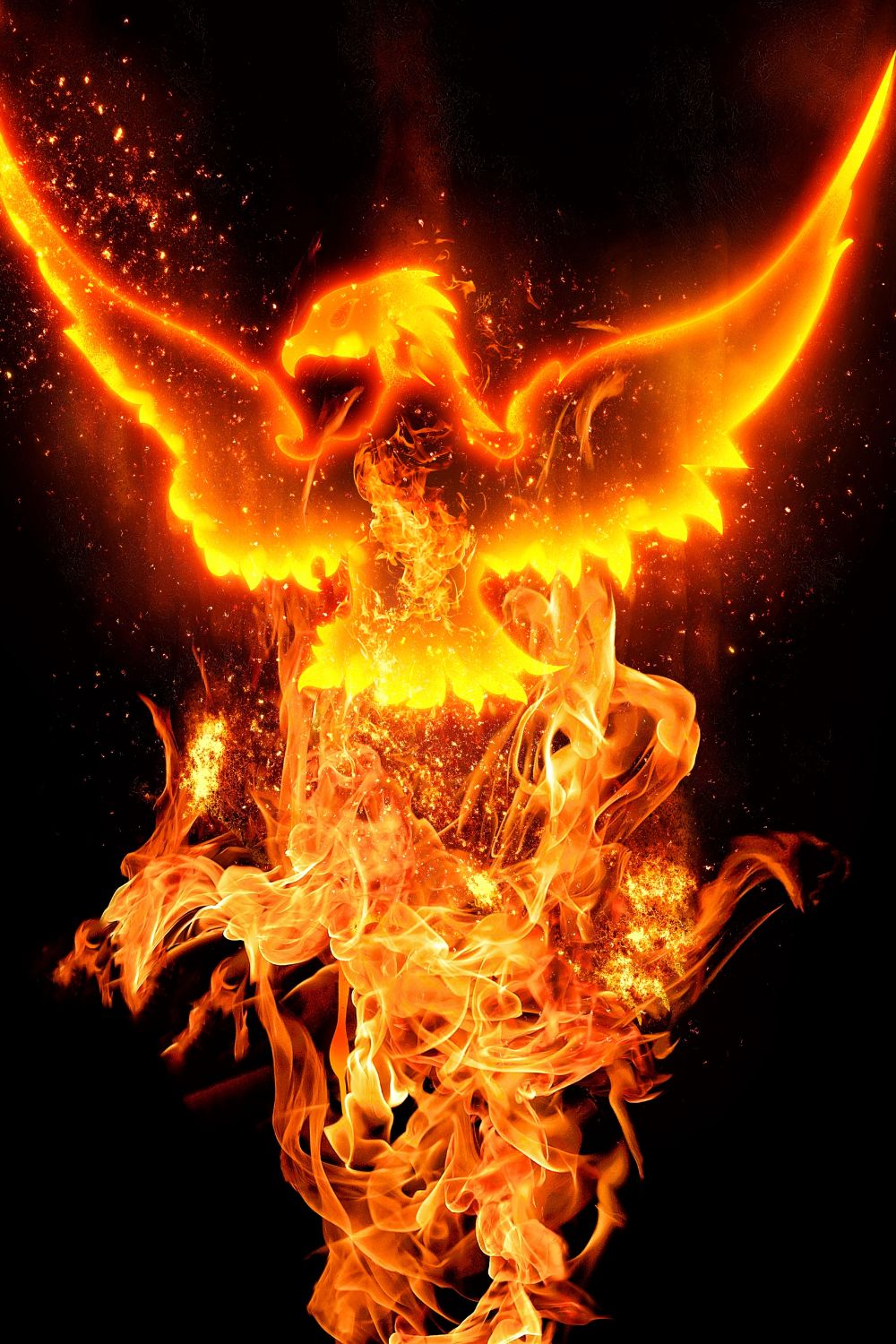 The Phoenix spirit animal is one of light rebirth and development. If you feel like you are in a dark place, the phoenix spirit animal will appear before you and grant you the strength to remove this darkness. When you get rid of the toxicity and negativity, life seems more colorful, like the phoenix’s feathers.

The process of purging darkness is a long and painful one. You might need to remove certain bad habits from your life. The darkness might also originate from a particular person you’ll need to let go of.

In any case, your phoenix spirit animal will ignite the fire within you and give you courage and faith in yourself to take the next step. It will help you to start aiming high and trying to achieve your goals. Once you begin your journey, the phoenix will be there to grow and spread your wings!

Finally, the phoenix spirit animal will generously provide you with its healing powers. Sometimes we don’t realize how much we hurt ourselves physically, mentally, and emotionally. The phoenix reminds us to always take care of ourselves.

If you have the phoenix totem animal, then your soul is definitely forged of fire. No matter how bad things look, you constantly believe in your established views and ideals and never lose hope. You are always ready to help and motivate others, as well as accompany them in their developmental journey.

The phoenix is aware that it will eventually resurrect from its ashes. That is what gives it the willpower to burn to death. Like the phoenix, you know that there’s always light at the end of the tunnel and a final destination to any journey. That is what fuels your constant motivation.

Despite all that, you need to be careful not to burn yourself on this everlasting fire inside you. To achieve this, surround yourself with trustworthy individuals, who share your motivation and ideals, but can also keep you grounded.

When you are struggling to make changes in your life, call upon the phoenix power animal. The bird will hear your cry and give you the strength and clarity to see things through. It will help illuminate your path and give you an end goal to look forward to.

The phoenix power animal is also an ideal call when you face tough problems that seem impossible to solve. If you rely on the power of the phoenix, you will be able to view things from a different perspective. Sometimes, that’s all you need to find the solution to a complex problem.

You can also employ the healing ability of the phoenix power animal. If you are struggling with the loss of a loved one, the feathers of the phoenix will heal your wounds and strengthen your spirit. Naturally, it will take time, and you need to mourn your loss. But, you will eventually prevail and become a better person through it.

All in all, the phoenix is a unique mythological creature. Its immortality comes at the cost of having to kill itself and be reborn every time. This shows tremendous courage and faith in the end goal.

The phoenix is a symbol of rebirth and renewal. Anytime you feel connected to this mythic bird, it’s time to change your life and strive to become a better individual. The phoenix will accompany you on your journey and lend you its strength, healing ability, and good luck.