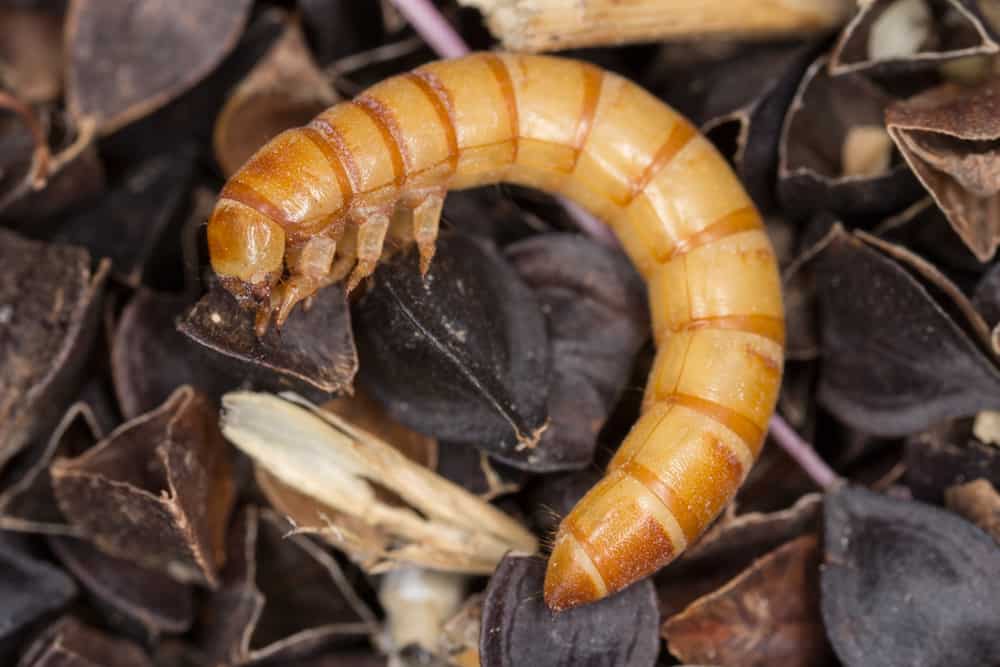 Mealworms may well be more famed now for being part of bushtucker trials on the reality television show, I’m a Celebrity Get me Out of Here, but there is a hell of a lot more about them than just that. Found almost everywhere in the world, these tiny insects are a huge part of our ecosystem.

If you’re looking for more information on mealworms, including what they eat, what eats them and their typical lifespan then you’ve landed in the right place as that is what we are going to be looking into today.

One of the first things that are worth mentioning about mealworms straight away is that, despite their name, they aren’t actually worms. Mealworms are actually classed as beetles as they are the larvae for darkling beetles.

The Infant Stage of Darkling Bettles

For those who aren’t clued up on the lifecycle of certain insects, the larva is the name given to a group of insects that then later transform into something completely different. For example, caterpillars are the larval stage of a moth or butterfly. Essentially, mealworms are the infant stage of a darkling beetle’s life.

As mealworms are only a temporary form of darkling beetle, the sole aim of a mealworm’s life is to eat as much food as possible. This is to build up the energy required to be able to transform into fully-fledged beetles later down the line.

One thing that gives away the fact that mealworms aren’t actually worms is the fact that they have six tiny legs. These sprouts from the thorax, below their head, and set them apart from real worms which have no legs. You will have to look closely to see these legs but we can guarantee that they are there!

Another thing that distinguishes mealworms from normal worms is the fact that they have exoskeletons. Exoskeletons are a type of skeleton that wraps around the body rather than inside it. The exoskeleton is made of chitin, which is a thick material ensuring mealworms have a hard exterior. These exoskeletons effectively protect them from being crushed.

In the wild, you are most likely to find mealworms lying underneath rocks or anywhere that is dark and wet for that matter. Due to their fondness for these types of spaces, you need to be careful in your gardens as they can end up munching on wet/damp garden furniture and potentially ruin it.

What do mealworms eat?

As already mentioned, mealworms need to eat regularly to build up the energy required to evolve into beetles. However, they aren’t the biggest insect in the world so they can’t just go around picking off anything they want like they’re the biggest predators in the wild.

Mealworms tend to focus on foods such as vegetables, animal waste, fruit, oats and grains. In addition to these ideal options, they will also eat decaying matter which is why it’s important to cover up any rotting wood/cardboard in your garden.

They have a particular fondness for fungus too. Mushrooms, yeasts and mold are often gobbled up by mealworms but too much of this food type can actually set them back and make them ill. Surprising considering they are happy enough to eat endless amounts of decaying leaves!

You couldn’t really call mealworms ‘hunters’ since you will typically find them burrowed in soil and leaves when it’s feeding time. Although their diet is predominantly fruits, grains and vegetables they are actually classed as omnivores.

To keep hydrated, mealworms use the moisture off leaves and other wet food sources. Hydration is another reason why they are typically fond of damp places as they big drinkers.

They don’t have the ability to attack and kill other animals so if they do ever eat other animals it will be ones that are already dead. In fact, they have even been known to eat fellow dead mealworms from time to time.

Given the size of mealworms, and the fact they don’t really offer much when it comes to aggression, they are easy prey for several different animals. As mealworms don’t have the capabilities to fight back, their best option is to defend and hide.

The most common predators of mealworms are reptiles, rodents, spiders, birds, and predatory beetles. In reality, though, you’ll do well to find any animal that lives in a woodland area, which wouldn’t eat a mealworm given the opportunity to.

The most common out of them all are birds. In fact, you can even purchase mealworms from many local shops to act as food for any birds that enter your garden. Given that they attack from above, it gives mealworms little chance to react and hide by the same they’ve swooped down.

Against other, ground-level predators, though, at least have a chance of making a run for it. They aren’t quick movers by any stretch of the imagination but they are very good at burrowing into the ground as an escape plan. This is largely thanks to their claws at the bottom of their legs.

As they spend a lot of time underground, their eyesight is pretty poor. So, to spot predators they have to use their antennae to get a good feel of their surroundings. Often, it can be too late before they realize meaning they aren’t able to burrow into the soil and escape.

One final ‘predator’ of mealworms is humans. Yes, mealworms are perfectly safe for human consumption, although we wouldn’t say they are exactly tasty. For those of you who watch I’m a Celebrity Get me out of here each year, this won’t be news to you as they play a regular part in the eating trials where celebrities are tasked with eating jungle critters.

What happens when a mealworm is ready to evolve?

The coolest thing about mealworms is that they are only actually one-fourth of a beetle’s lifespan. The other three parts are the egg, which is the stage immediately before the mealworm stage, and then ‘pupa’ and adulthood.

The egg part of the process can last up to 20 days and when it hatches, the mealworm will begin its cycle. They will then live as a mealworm for around 8-10 weeks, growing in length and strength in the process. They will get to around one and a half inches in length before cocooning themselves inside their exoskeleton – this is what’s known as the pupa stage.

The pupa stage can last up to three weeks, and during this stage, the mealworm to beetle process will take place. They can survive without eating during this stage and they will not move at all, making them potentially easy targets for predators.

Once they have transformed into beetle, they will break out of their hibernation and begin the final stage of their lives. After a couple of weeks, they will start to reproduce and the process will begin all over again for a new mealworm/beetle.

Female beetles can lay around 500 different eggs in their lifetime, which usually lasts around six months. Considering one egg = one beetle, it is no wonder that there appear to be beetles everywhere you look when on a walk through a forest/woodland area.

Can you keep mealworms as pets?

In the traditional sense, there isn’t much point in keeping mealworms as pets because they aren’t exactly going to fulfill your life as a pet dog or cat would. However, you can keep them in captivity if you are intrigued to see their fascinating life cycles occur in front of your eyes.

Additionally, some people keep mealworms at home because they are a great source of protein for other pets. Regardless of your intentions, you must feed and house them correctly if you keep them in your home.

In terms of feeding them, provide them with food such as oatmeal, bran, bananas, apples, pears, peaches, grapes, carrots and potatoes. As an absolute last resort, they will also be happy with dry cat or dog food.

In terms of storage, if you are keeping them for food for your other pets then it’s best to keep them refrigerated in a tub with small holes in it. If you are keeping them to follow their lifecycle then keep a large selection of them in a large tray with walls, or even an aquarium, to prevent them from escaping. Ensure the tray/aquarium is damp and provide them with food regularly.

Please remember to take them outdoors when they are in the pupa stage. The last thing anyone wants is hundreds of beetles running around their house and laying eggs.

I bet after reading this article you now have a completely different outlook on mealworms when compared to what you thought about them beforehand. For starters, they aren’t worms at all and secondly, they evolve into darkling beetles.

We hope that the information provided above has also helped to educate you on the eating patterns of these tiny insects and also the predators that seek them out.