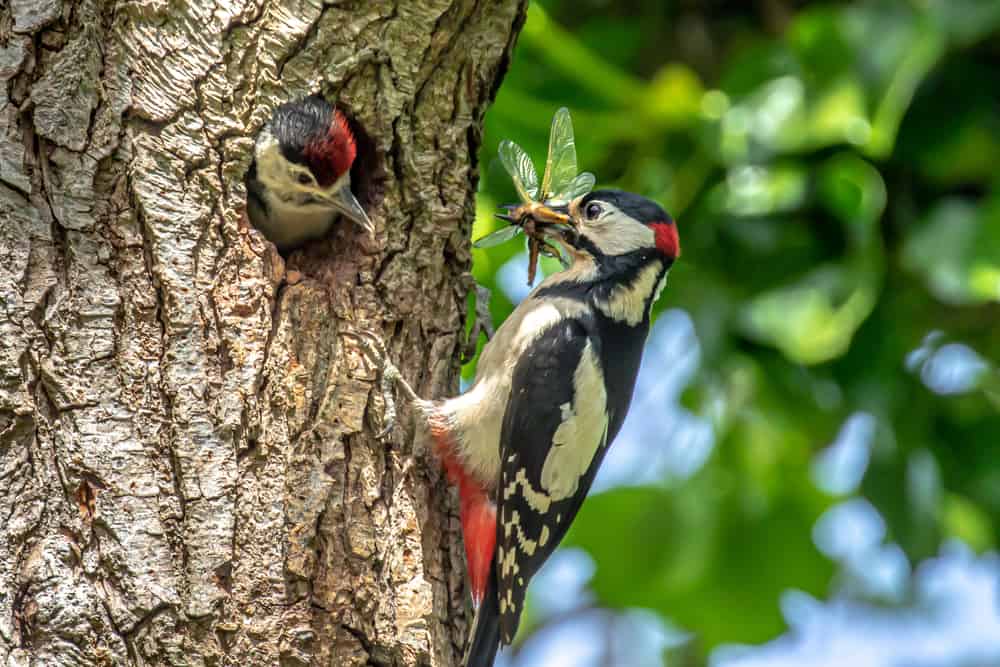 Comprised of around 240 different species, the woodpecker family has produced some of the most curious birds in the bird world. The distinctive tremolo knocks of the woodpecker’s beak against the bark of a tree or roof of a house can be heard for many hundreds of feet away, and has come to symbolize a number of different things over the years.

From Native American mythology to modern fairy tales and cartoons, woodpeckers have shaped much of our folklore. A woodpecker’s symbolism continues to tell us things about ourselves and the natural world around us. In this article, we’ll be exploring their meaning as totems, omens and symbols. 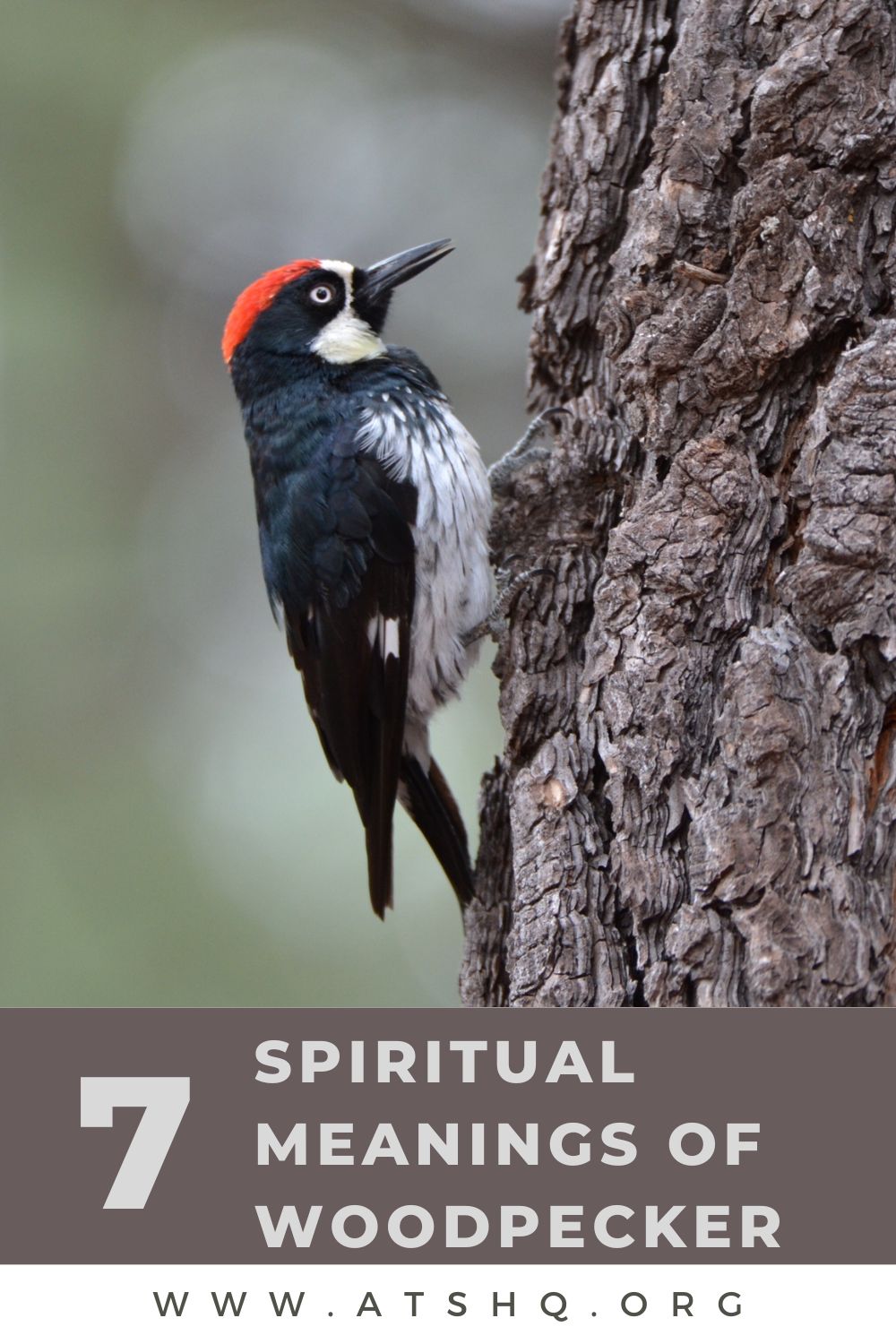 When we think of a woodpecker, chances are we’re thinking of a very specific type – the common North American pileated woodpecker, or Palearctic greater spotted woodpecker. With mottled black and white plumage and bright red heads, these nifty tree-climbers are a charming member of the Western woodland.

Truth is, though, these famous woodpeckers belong to a much larger family. The Picidae family is home to some 240 different species of woodpecker, piculets, sapsuckers, and wrynecks. Each of these birds exhibit similar traits, and are grouped together for distinctive anatomical, as well as behavioral, reasons. 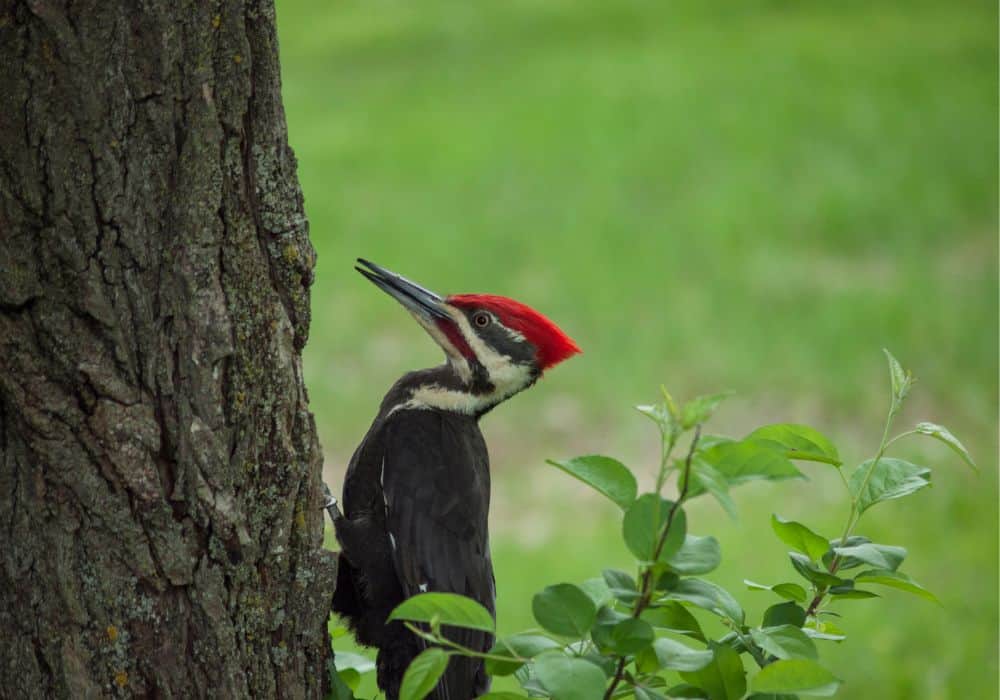 Woodpeckers, piculets, sapsuckers and wrynecks all tend to have more or less the same anatomical make-up, but their overall appearance can vary quite greatly.

Their feathers may be fairly drab or quite exuberantly colorful. Many woodpeckers exhibit pied plumage, often based on olive green, gray, brown, black and white colors which help them to blend in with their arboreal environments. More than a few species of woodpecker have red in their plumage, either around the head or tail, making them quite easy to identify, even to amateur bird-watchers.

Distinctive among woodpeckers is their medium-length sharp and visibly-strong beak, which they use to characteristically “peck” wood, creating that recognisable drumming sound. They also have extremely long tongues which they use for feeding. Many of them have tufts of plumage like Mohican hairdos atop their heads.

Woodpeckers, piculets, wrynecks and sapsuckers are found in every country and in every corner of the world except for Australia, New Zealand, New Guinea, Madagascar, and at the extreme poles. As you might have guessed, given their name, they are most often found in woodland and forests, where they can find the greatest distribution of natural food and habitat.

Woodpeckers aren’t usually picky, and will inhabit rainforests, tropical forests, shrubland or woodland – both deciduous and coniferous. However, some – like the acorn woodpecker with oak trees, for instance – have evolved tangentially with specific types of wood.

The most definitive characteristics of the woodpecker family are undoubtedly their peculiar behaviors.

The behavior for which woodpeckers are most well-known is, of course, the rhythmic drumming on tree trunks and bark. Drumming serves three major purposes for woodpeckers.

Firstly, pecking wood allows woodpeckers to excavate holes in the tree, through which they can access their widely flexible diet of bugs and creatures.

Secondly, this behavior enables them to dig holes large enough to nest and raise chicks in.

And thirdly, woodpecker pecks also form the basis for their communication skills. Unlike other passerine birds and songbirds, woodpeckers don’t have a pretty song to sing. Their cries are infrequent and harsh. Instead, they communicate with each other in the same way many human cultures have for centuries: by drumming out a beat in a very specific rhythm against the trunk of a tree.

Woodpeckers have come to represent a whole range of positive traits, omens and messages to humans over the centuries.

From loyalty, steadiness and resilience, to creativity and wisdom, sometimes even bad luck, we have made a totem animal out of the woodpecker, reading deeply into any encounter with a woodpecker we might be fortuitous enough to enjoy.

Now it’s time for us to take a look at this creature as a woodpecker spirit guide, in order to get to the bottom of the symbolic meaning of woodpeckers.

We humans are highly social animals. It’s built into our very DNA, as we’ve evolved to require community and socialising as a necessity of survival. Thus, when we come across other animals sharing the earth with us who don’t need community, our interests are automatically piqued.

The woodpecker is one such bird. Whilst there are exceptions, generally speaking woodpeckers tend of be aggressively solitary. They like their own space, and will fend off other woodpeckers attempting to fly into their delineated territory.

Like warriors of old, they beat out a sharp drum pattern for all to hear, stating that this or that space is theirs, and no one better seek to trespass into it.

For humans all throughout history, this determined solitude of the woodpecker has served to inspire hermits and introverts also seeking a little private space they can call their own. The solitary woodpecker is a symbol of independent spirit, resourcefulness, privacy and inner-contemplation.

Perhaps one of the elements of woodpecker symbolism which is peculiar to our modern age is the fascination with most woodpeckers’ hermit-like lives. For millennia, humans have lived incredibly close to one another, in small communities in which they knew everyone (and their cousins, and their cousins’ cousins, and so on).

Today, however, we actually live quite solitarily. Social media, in spite of its claims, has driven a wedge between us, so much so that physical interaction with one another becomes increasingly rare. Thus, perhaps we now look to the woodpecker as a symbol of survival and resilience in these strange times. Perhaps we look to the woodpecker and say: “Could I, too, live like that?” 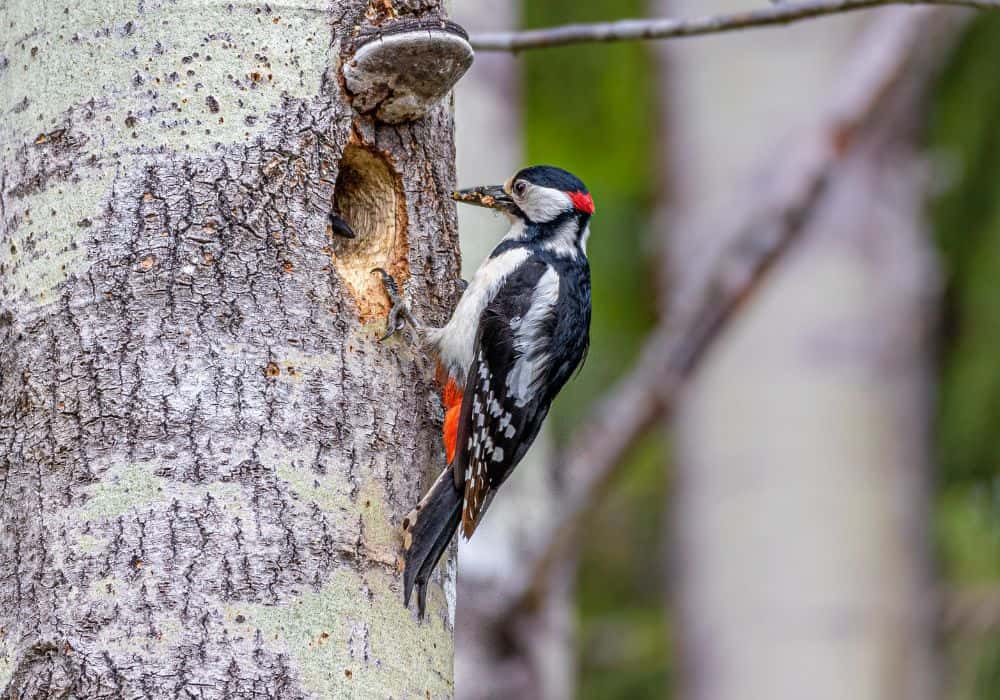 Not all woodpeckers adhere strictly to monogamy, but a fair number of them do, which has been enough to inspire humans throughout the ages.

When a common woodpecker finds a mate, he/she appears to fall in love with their mate, for they never again leave this mate’s side. Instead, they procreate with the mate until death, assisting in the building of nests for, and rearing of, their chicks.

Whenever we talk about the symbolism of a specific animal, the meanings associated always have some basis in fact. The loyalty, durability of love, fertility and fealty of the woodpecker to their partner is no exception. We see this, and we are inspired to pursue our own likeminded relationships.

Perhaps part of the reason why monogamy in animals is so replete with symbolism and attached meaning is that it is as rare to find in the animal kingdom as it can be in our own relationships. Unfortunate as it is, the fact remains that many of us (if not most) have been cheated on, or had an unfaithful partner.

Therefore, we understand implicitly the hurt and anger which go hand-in-hand with the act of betrayal, and so look for any signs of there being such a thing as a successful monogamous relationship. Naturally, we do find countless examples of these amongst our friends, even if just for a period of time (rather than life).

However, to find one within nature, especially within the bird kingdom (given birds’ traditional association as bridges between the earthly and heavenly realms), we attach a special significance to it. To us, the monogamy of woodpeckers is sign that, even in the wilderness, even amongst birds who prefer to spend much of their time alone, there is hope for a loving, faithful, healthy and happy relationship. 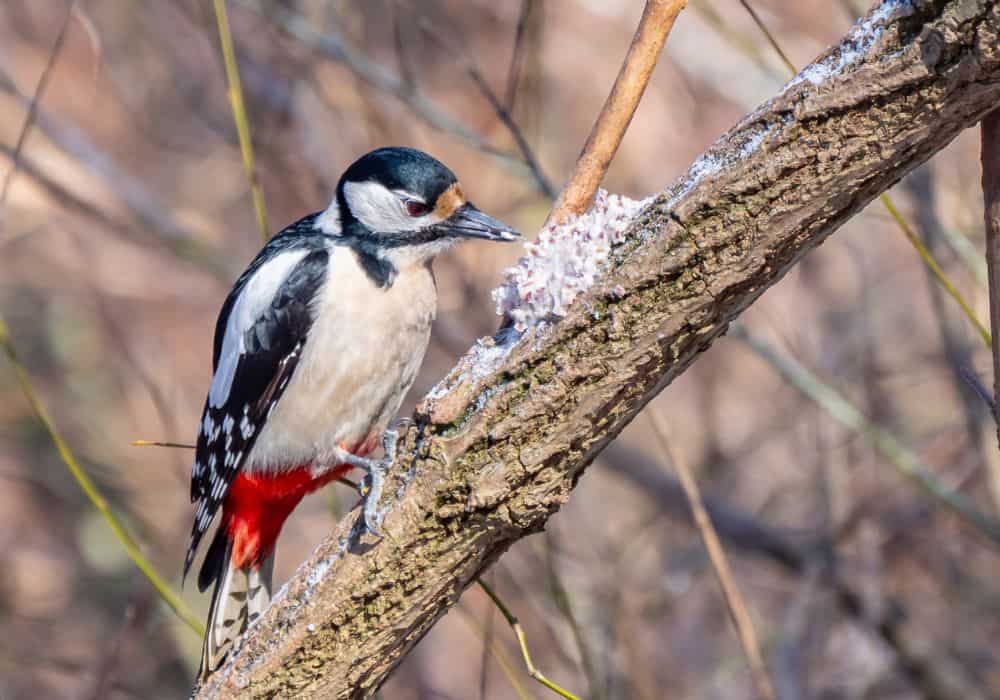 Birds can hold key roles in the folklore and mythology of myriad cultures, but rarely are they made actual gods of! Picus was a woodpecker god and ally of the Roman god of war and agriculture, Mars.

In Roman mythology, the worship of Picus was tied directly to agriculture, and the fertilization of the soil with manure. In an agricultural civilization, this made Picus the woodpecker an indescribably important character.

Undoubtedly the mythical status of the Roman woodpecker Picus was linked to the red plumage of the greater spotted woodpecker – common throughout Europe – since red was famously the color of Mars (the planet and god) and signified war.

In Greek mythology (from which most of the Roman mythology is derived), the woodpecker was equally sacred, only this time to the gods Zeus (god of thunder and sky) and Ares (god of war and courage).

The Vikings were obsessed with war, blacksmithing, and the almighty god-hammer Mjolnir, which belonged to the god of thunder and storms, Odin’s son Thor.

Is it all that surprising, then, that they too should equate the woodpecker with war and fighting? It would appear that the loud hammering sound of the woodpecker’s pecks sounded to the ancient Norse like the banging of a hammer on the heated steel of an axe-in-the-making.

Perhaps, they must have wondered, the woodpecker is a symbol of Thor, and thus of war and thunder, working away in the Scandinavian treetops creating its own hammers and weapons of war. 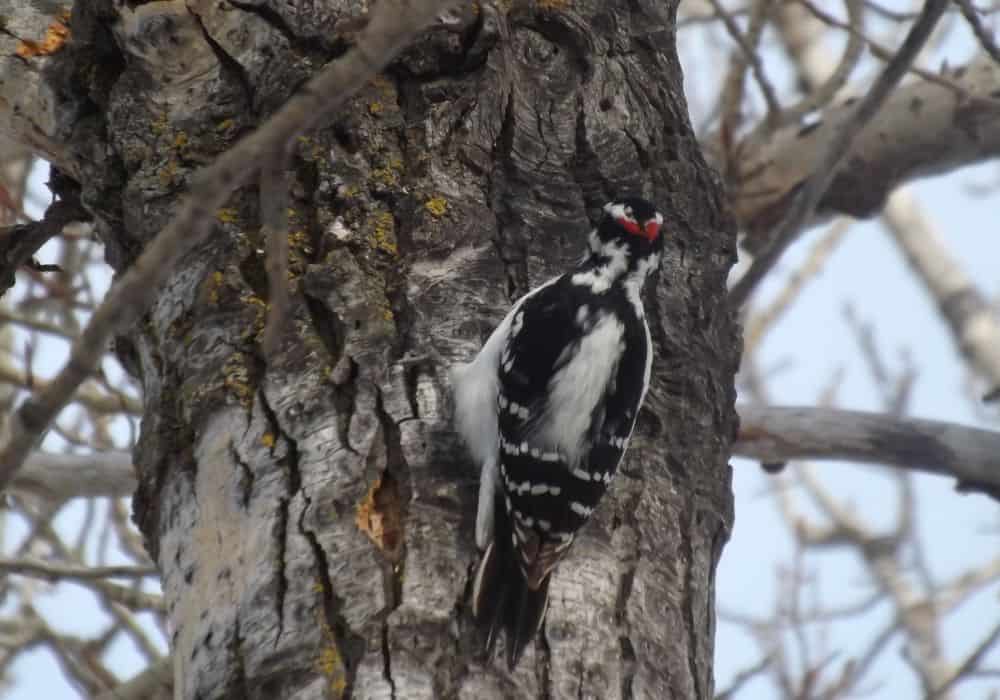 Ancient Celtic druids held the oak tree in the highest esteem (in fact, ‘druid’ might actually mean ‘oak-knower’). It is quite possible, therefore, that their symbolic reverence for the humble woodpecker stemmed from encounters with the acorn woodpecker (aforementioned) who chose solely to live in oak trees.

The ancient Celts with their shamanism and druidic rituals – like many other indigenous and pagan world cultures – viewed birds as divine messengers: creatures which could flit between the worlds of the living and the dead, of the ‘real’ world and the spiritual world.

When woodpeckers would pay special attention to dead trees (because of the food which can be found inside), ancient Celtic people would contemplate this reverence for the dead, leaving them with a special fondness for the woodpecker power animal, and a curiosity for its secrets.

Of course, the woodpeckers of North America left an equally vivid impression on the folklores and mythologies of the many disparate North American native and First Nations tribes.

So much of the woodpecker’s time in the treetops – come breeding season – is spent building a home for themselves and their families. This is an arduous task, as involves the chipping away of huge amounts of wood, and the hollowing out of vast tree trunks, all to provide for the safety and protection of their mates and chicks.

Understandably, therefore, woodpeckers in North America came to symbolize family values, protection of the home, and the bounty of hard work to many Native American peoples, some of whom incorporated a woodpecker totem into their ceremonies, or counted the woodpecker spirit animal amongst their most respected of all nature’s children.

Other Native American cultures may hold the woodpecker to be a bearer of friendship and happiness, whilst still more (like the Seminole of modern-day Florida) tell of the woodpecker’s trickster ways.

To many Native people, the woodpecker’s drumming – steadily reverberating off the mountains and hillsides of pre-urbanized America – would have sounded like the very heartbeat of the earth.

7. Woodpecker in Woodpeckers in Slavic Traditions

The trunks, branches and trees devoured by the mad pecks of the woodpecker tend to reduce the stability of any given tree, in time killing the tree entirely. Observing this, ancient Slavic people began to associate the woodpecker – not with positive things, as other cultures did – but with the cycles of death.

Woodpeckers have featured prominently in fairy tales and cartoons (Woody the Woodpecker, for example), as well as throughout mythology. The fiery red plumage of some species, as well as the aggressive nature of their solitude and their ceaseless, smith-like drumming led most ancient European cultures to associate woodpeckers with war and courage, and others with the cycle of death. In North America, however, the woodpecker became a symbol of homeliness, loyalty, family and friendship.