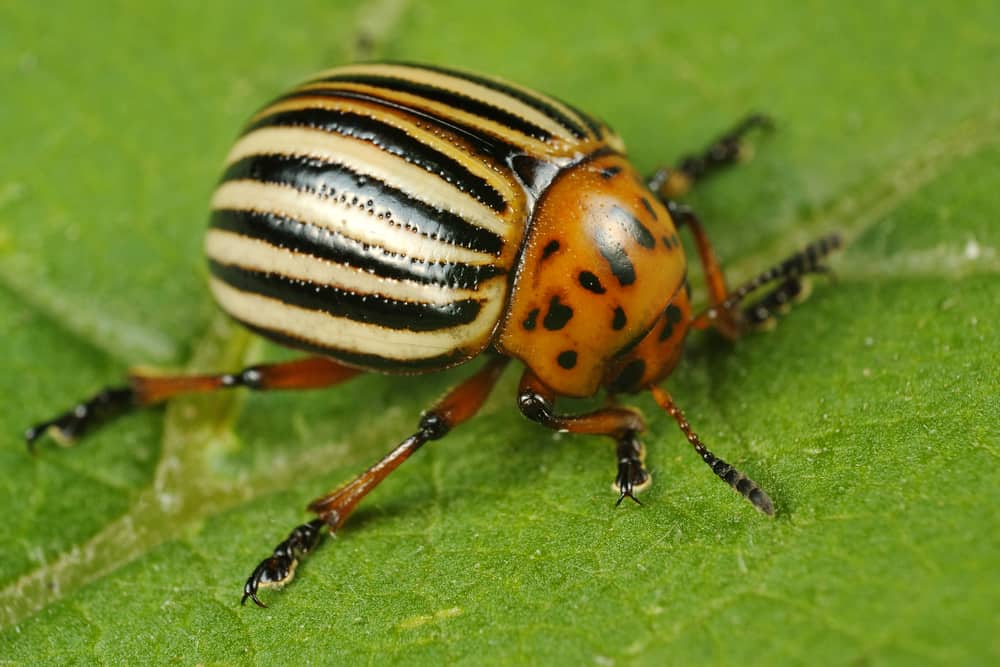 Do you have potato bugs in your garden? If so, you’re not alone.

These pesky insects can be found in many parts of the world, feeding on leaves and potatoes alike. The good news is that they are relatively easy to get rid of if caught early enough, and there are a number of ways to do it.

In this blog post, we will discuss everything you need to know about potato bugs – including what they eat, how to identify them, and how to get rid of them. So if you’re having trouble with potato bugs, read on for some helpful tips!

What Are Potato Bugs?

Potato bugs, also known as potato beetles, are a type of beetle that is considered a pest to gardeners in the United States and other parts of the world. If you’ve seen them or experienced them on your potato plants, you know how much of a menace they can be – especially if you let them go for a while.

Adult potato bugs can be found feeding on the leaves of potato plants or other vegetables in the nightshade family (such as tomatoes, eggplants, and peppers). They use their strong jaws to puncture the plant and suck out the juices. Potato bugs can also cause problems for farmers in other ways because they can transmit a virus to potato plants that can reduce yields.

They are definitely something you want to get out of your garden right away when you find them.

Where Do Potato Bugs Live?

Potato bugs are most commonly found in the western and southern United States. However, depending on the type, they are least likely to be found in Alaska, Hawaii, California, and Nevada.

As far as where they live within the garden itself, they are typically found in large numbers on potato plants, but can also infest other crops too. They also love moist soil and under rocks.

Depending on the type, they often lay their eggs on the bottom of leaves, and the larvae eat the leaves or at least suck out the green portion. Other types of potato beetle larvae will burrow through potatoes and other types of tubers, causing room for rot and bacteria to seep into the plant.

While there are a few different types of potato bugs, there are two main types that you might find in your garden – the Colorado potato beetle (Leptinotarsa decemlineata) and the Jerusalem cricket (Stenopelmatus fuscus). Both of these insects are capable of causing serious damage to crops, so it is important to be able to identify them and deal with them quickly. 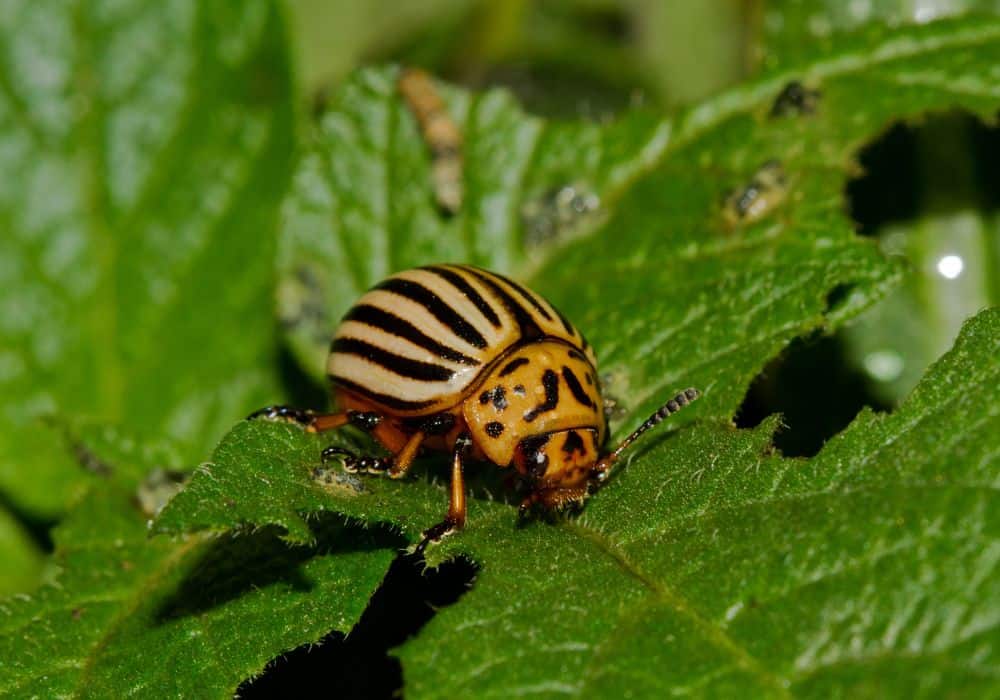 The Colorado potato beetle is the most common type of potato bug in North America. These endemic beetles are about ½ inch long and have orange bodies with black stripes running down their backs.

Females can lay up to an impressive 500 eggs at a time on the underside of leaves on the host plant, and then they hatch into larvae within two weeks. These larvae are yellow in color and have black spots on their bodies. As they grow, they begin to resemble adults, with a large orange abdomen and little black legs.

They will feed on potato plants for four to six weeks before pupating into adults and starting the process again.

The Jerusalem cricket (or in Spanish, they are often called el niño de la tierra—the child of the earth) is a crazy-looking type of potato bug that is found in the southern and western United States. These insects are a whopping 2 inches long (or more) and have brown or black bodies with dark stripes running down their backs.

Like other crickets, they can make noise by drawing their legs across their abdomen. The sound they make is a sort of hissing sound, usually when they are feeling distressed.

They have beady eyes and a jaw with nasty teeth. But don’t let their viscous appearance scare you. They are nocturnal and tend to avoid humans as much as possible.

Females lay their eggs in a huge nest deep in the soil, where they hatch into larvae within a couple of weeks. These larvae are white or cream-colored and have black spots on their bodies. They will feed on potato plants for four to six weeks before pupating into adults.

What Do Potato Bugs Eat? 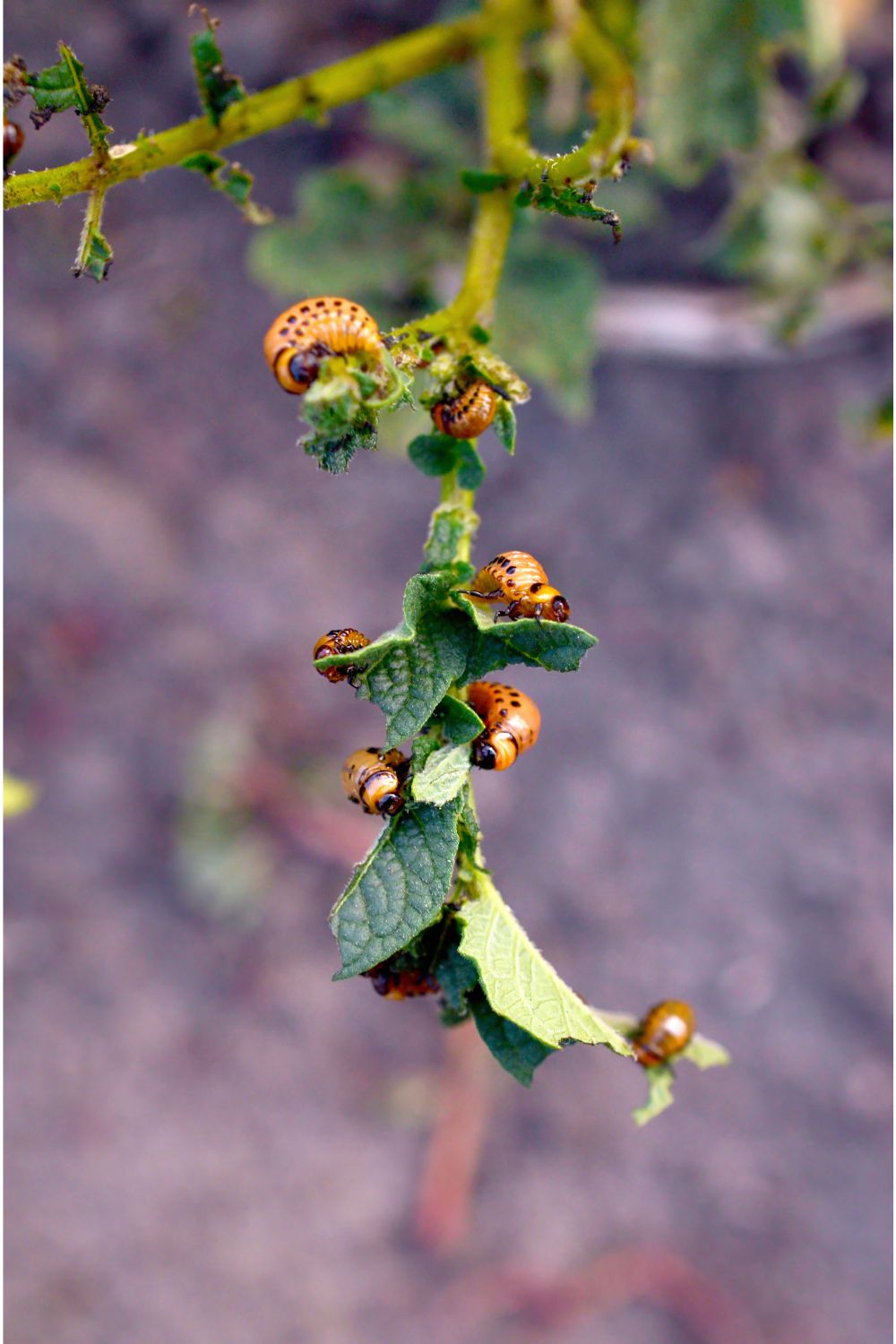 As their name implies, potato bugs primarily feed on potato plants. But as we mentioned before, they can also infest other crops in the nightshade family such as tomatoes, peppers, and eggplants, eating these plants (and their leaves) by puncturing through with their strong jaws and mouthparts.

In addition to eating potato plants, potato bugs will also eat other types of vegetation such as straw and other organic material, like noxious weeds called burweed (Solanum rostratum) and hairy nightshade, which can reek havoc on farmer’s fields and to their equipment. This helps them to obtain the nutrients they need to survive. Some potato bugs like the Jerusalem cricket will even feed on other insects.

However, if they are cornered and need to protect themselves, they are capable of causing a painful bite. This bite is strong enough to draw blood.

Additionally, as we’ve mentioned, potato bugs may be able to transmit a virus to potato plants that can reduce yields.

But thankfully, they do not have venom, making them relatively harmless in nature.

How to Get Rid of Potato Bugs

There are a number of ways that you can get rid of potato bugs from your domestic garden. Let’s look at a few of them.

One way to get rid of potato bugs is to let nature take its course and allow their natural predators to do the job for you. And there are several!

Some of the most common predators of potato bugs include:

All you need to do is create a habitat that is conducive to these predators and they will do the rest. This may include planting native plants with nectar, adding water features, buying animals like chickens or ducks, and avoiding the use of pesticides in your garden. You can also purchase predator bugs online, which is pretty amazing!

Another method is to use chemical insecticides, but be sure to follow the instructions carefully so that you do not damage your plants or harm other living things like birds, for example.

This is the approach used by many commercial farms, as a way to reach a vast amount of crops in a short amount of time. The thing to remember with this method is that insecticides will kill all the other insects too, including those that are natural predators, like the ones mentioned above.

It is likely not necessary to use chemical insecticides in your domestic garden, however. But it is an option if you choose to go this route.

If you are not comfortable with using chemicals, there are a number of natural insecticides that you can use to get rid of potato bugs.

Some of these methods include:

Potato bugs can be a serious problem for farmers and gardeners alike. But by taking some preventive measures and being diligent about monitoring your plants, you can avoid an infestation. And if potato bugs do get into your garden, there are a number of ways to get rid of them. Just be sure to take action quickly so that they do not have a chance to do too much damage.

Potato bugs are most active at night, so be sure to check your plants regularly for signs of an infestation. And if you do find potato bugs in your garden, don’t hesitate to take action to get rid of them. Don’t forget to practice good hygiene after working with infested plants so that you do not spread the potato bugs to other parts of your garden.

These are just a few of the methods that you can use to get rid of potato bugs. Some require more work than others, but ultimately it is up to you to decide what is best for your garden.

Now You Know All About the Potato Bug

Pesky potato bugs can be a serious problem for farmers and gardeners alike, but there are a number of ways to get rid of them. Be sure to take action quickly if you find potato bugs in your garden so that they do not have a chance to do too much damage. With a little bit of diligent effort on your part, you’re sure to kick those pests to the curb!

What methods work for you when removing potato bugs from your garden? Let us know in the comments below!