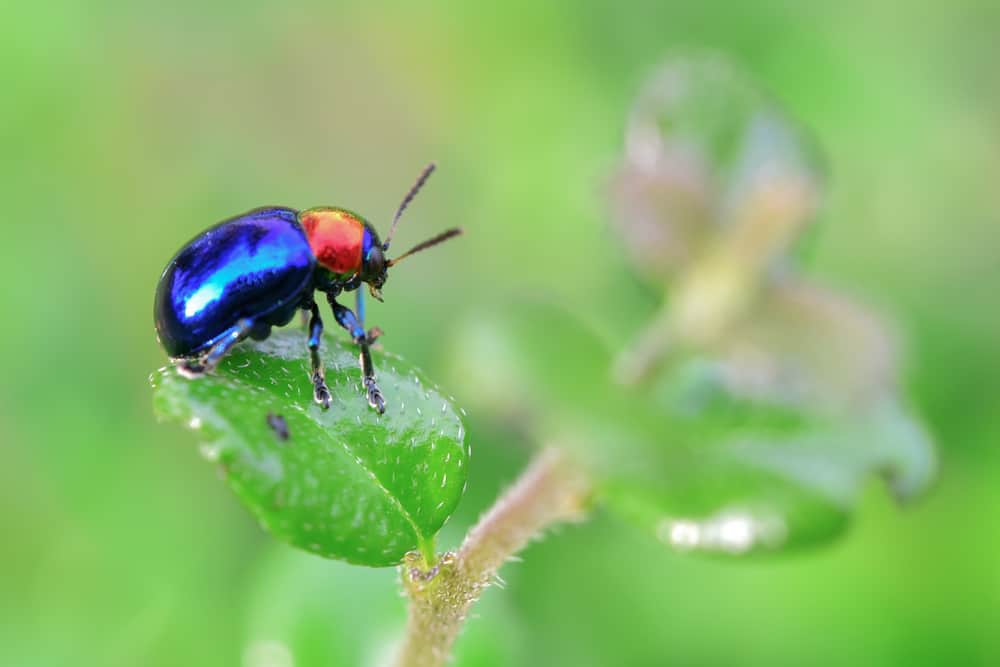 Insects are everywhere. Whenever you walk down the street, you most likely step on quite a few of them without even knowing. In fact, your house probably has more than a few insects inside it right now! But, don’t just kill them, as they are more beneficial to us than you think.

Insects are one of the oldest and most prominent families of living organisms on the planet. Their incredible numbers mean that they eat several different types of foods, and they also play a massive role in our ecosystem.

So, what do insects eat? How many different types are there based on their diet? And, what is their role in the planet’s stability? If you want the answers to these questions, keep on reading!

Insects are hexapod invertebrates that belong to the phylum of arthropods. The name “insect” originates from the Latin word “insectum”, which means an “animal with a divided body”. Their body consists of three parts: the head, the thorax, and the abdomen, and they also have an exoskeleton for support and protection.

Insects hatch from eggs and undergo a three or four-stage metamorphosis until they reach adulthood. It’s a well-known fact that insects have incredible biodiversity, with over 1 million different species, and account for almost half the living creatures on the planet.

What Do Insects Eat?

The large number of insect species in different shapes, sizes, and colors, along with the numerous food resources available in nature, lead to countless diet variations. Nonetheless, some insects exhibit specific trends regarding their food choice. Here are some of the most popular types of insects and what they usually eat:

Ants are some of the most prevalent types of insects. They live in colonies that can reach millions in population, and you can find them anywhere in the world, except for Antarctica. Since there are so many of them in each colony, food collection is a collaborative effort.

Ants are omnivorous insects, meaning they essentially eat anything they find, whether it’s fruit, vegetables, meat, or even other insects. When an ant spots even the smallest amount of food, it will usually inform the rest of the colony. Then, some of the members work together to move the piece of food back to their nest to eat collectively.

The diet of a butterfly is highly dependent on how it consumes food. Butterflies are one of many insect types that have a large proboscis which they use to eat. This essentially works like a long tongue that the butterfly uses to sip liquids. Therefore, its diet is solely based on liquids.

Butterflies primarily sap the nectar of different flowers. With their long proboscis, they can reach the deepest parts of flowers where the nectar is. They also enjoy over-ripened fruit, as their insides become more liquid and are easier to consume for butterflies.

Despite their seemingly simple diet, bees actually have varying dietary requirements. In fact, bees need protein, fats, and carbohydrates in different proportions depending on the season or the processes that take place in the hive. Nevertheless, bees cover all their nutritional needs through nectar and pollen.

Nectar is the primary source of carbohydrates, giving bees the necessary energy to move around. Pollen is a source of protein and fats for them, and they consume it in different quantities depending on the time of year.

Wasps are a unique type of insect. It’s often seen killing other larger insects or arachnids and then carrying them back to their nest. However, adult wasps don’t actually eat other insects. Instead, they chop them up and feed them to their larvae.

Adult wasps have a diet that consists solely of carbohydrates, which is why they are attracted to anything sweet you have with you on a picnic. Wasps usually eat nectar from flowers and honeydew to get the necessary carbohydrates. Through this process, they also become accidental pollinators when they move from flower to flower.

The common house flies are considered general eaters. This means that they can essentially consume any type of food, including animal and human feces; however, they are particularly attracted to overripe and rotting foods.

Flies only consume food in liquid forms, and they use their sponging mouths to liquify all foods. When a fly lands on a piece of food, it will “taste” it with its feet. If it finds the food enjoyable, it will regurgitate it to start liquifying it so it can eat.

Most insects are herbivorous, which means they eat parts of plants like leaves, stems, and flowers. Caterpillars are some of the most popular plant-eating insects. Due to their metamorphosis, which happens in several stages, caterpillars grow a lot and, thus, require huge amounts of food.

Most caterpillar species eat the leaves or stems of certain plants. However, there are even some carnivorous species of caterpillars. For instance, the Hawaiian caterpillar utilizes silk to trap slugs and consume them.

Speaking of carnivorous insects, the dragonfly is the most popular insect that eats other insects. Dragonflies are some of the largest insects in the world. In fact, an ancestor of present-day dragonflies could reach a wingspan of up to 28 inches. Naturally, modern dragonflies are much smaller, but they are still considered big insects.

A dragonfly eats several insects that can reach up to its body weight daily. It basically eats any insect it’s able to catch, aided by its exceptional agility. Some of the most common prey for dragonflies are moths, butterflies, mosquitos, flies, and even other dragonflies.

Another type of carnivorous insect is the praying mantis. The praying mantis usually eats bugs, including grasshoppers, crickets, termites, and other mantises. However, it can also kill and eat larger animals like frogs, spiders, small birds, and lizards.

The praying mantis is also one of the few insects that practice cannibalism. Specifically, the female praying mantis will eat the head of males who attempt to mate with it. Despite that, the male can still engage in copulation.

Blow flies are an essential part of any ecosystem as they help get rid of carrion, which is decaying animal flesh. Specifically, adult blow flies will lay eggs inside dead animals, and when the larvae hatch, they will begin to consume the dead flesh for nutrition and sustenance.

Blow flies can also feed on animal feces. They have an incredible sense of smell that allows them to smell dead matter up to 2 miles away. That’s why they are usually the first to arrive at a place where there’s a dead animal.

There are a few different types of dung beetles, but all of them primarily consume dung, which is animal feces. Roller dung beetles collect a large amount of manure into a ball shape that they eat and use as a mating space.

Other types of dung beetles will bury their dung deep underground before eating it. These beetles can collect a daily amount of dung that’s equal to 250 times their body weight.

How Do Insects Affect Humans?

Most types of insects play a huge role in the balance of our ecosystems. Insects that act as pollinators are essential to the life cycle of many plants and flowers. If these insects were not present, the flowers would die off, which would directly affect the animals that eat them, including humans.

On the other hand, some insects can benefit humans financially thanks to the substances they produce. Two great examples of this are bees that produce honey and silkworms that produce silk. Other insects play an essential ecological role as predators. A great example that is also beneficial to humans is the praying mantis that consumes certain farm pests.

Despite all those important environmental roles, humans treat most insects as pests and aim to exterminate them with insecticides. While insecticides can effectively remove pests, they can also contaminate large bodies of water through runoff and harm other ecosystems as well as humans.

Whether you find them fascinating or outright disgusting, insects are so ubiquitous that you basically can’t avoid them. Next time you try to squash an insect, remember that its food patterns and actions play a vital part in the balance of the planet’s ecosystem. Thus, be nice to them, so they can continue to help the environment.