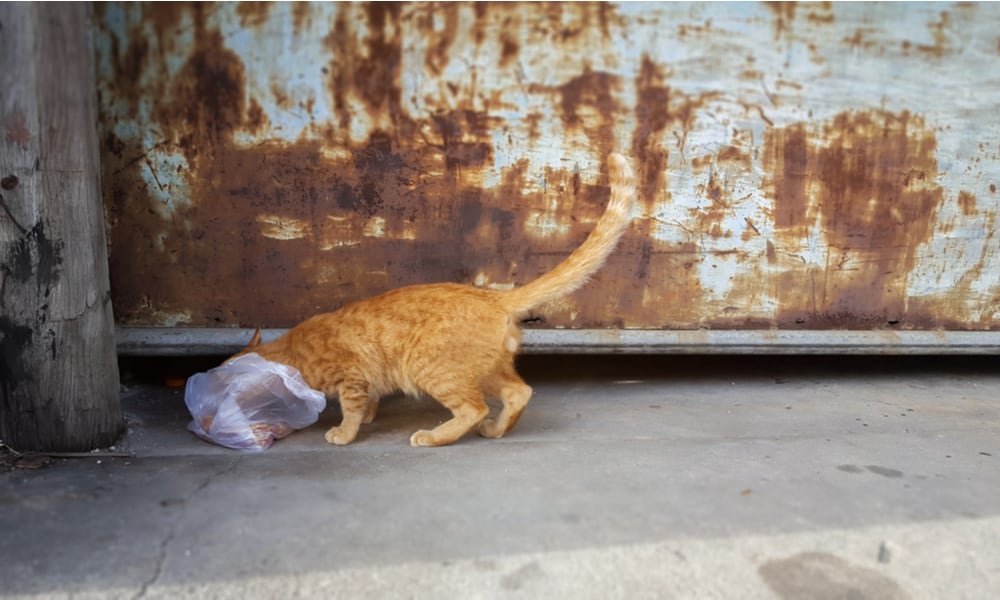 If you keep cats or dogs, there’s a high chance you’ve seen them partaking of some fairly unusually snacks from time to time, including grass, poop, dirt and others, to name but a few. And especially in cats, you may have also seen them indulging in a bit of plastic.

This kind of behavior is actually extremely common, but even so, it’s undesirable since it’s not natural and may be harmful to your little furry buddies. So to help you understand their reasons for doing it and how to stop it, here we discuss the question, why do cats eat plastic?

Pica in pets and humans – many causes

Eating non-food items is a well-known disorder that is known technically as pica. Dogs and cats as well as other animals commonly eat a range of unsuitable items, and even in humans, eating things like earth, metal objects and more is also well documented.

Even when we’re dealing with human pica – and we can just ask the person why they’re doing it – sometimes, it’s not easy to work out the causes, but in animals, it’s even more difficult because they can’t explain their actions.

There are many reasons why dogs and cats sometimes consume things like grass, poop or dirt, and many of the reasons overlap, including things like dietary deficiencies, illness, stress, loneliness, boredom and more.

Some of these are also drivers for why cats commonly turn to munching on plastic, but there are also some unique reasons for this behavior, so let’s think about the most common ones now. 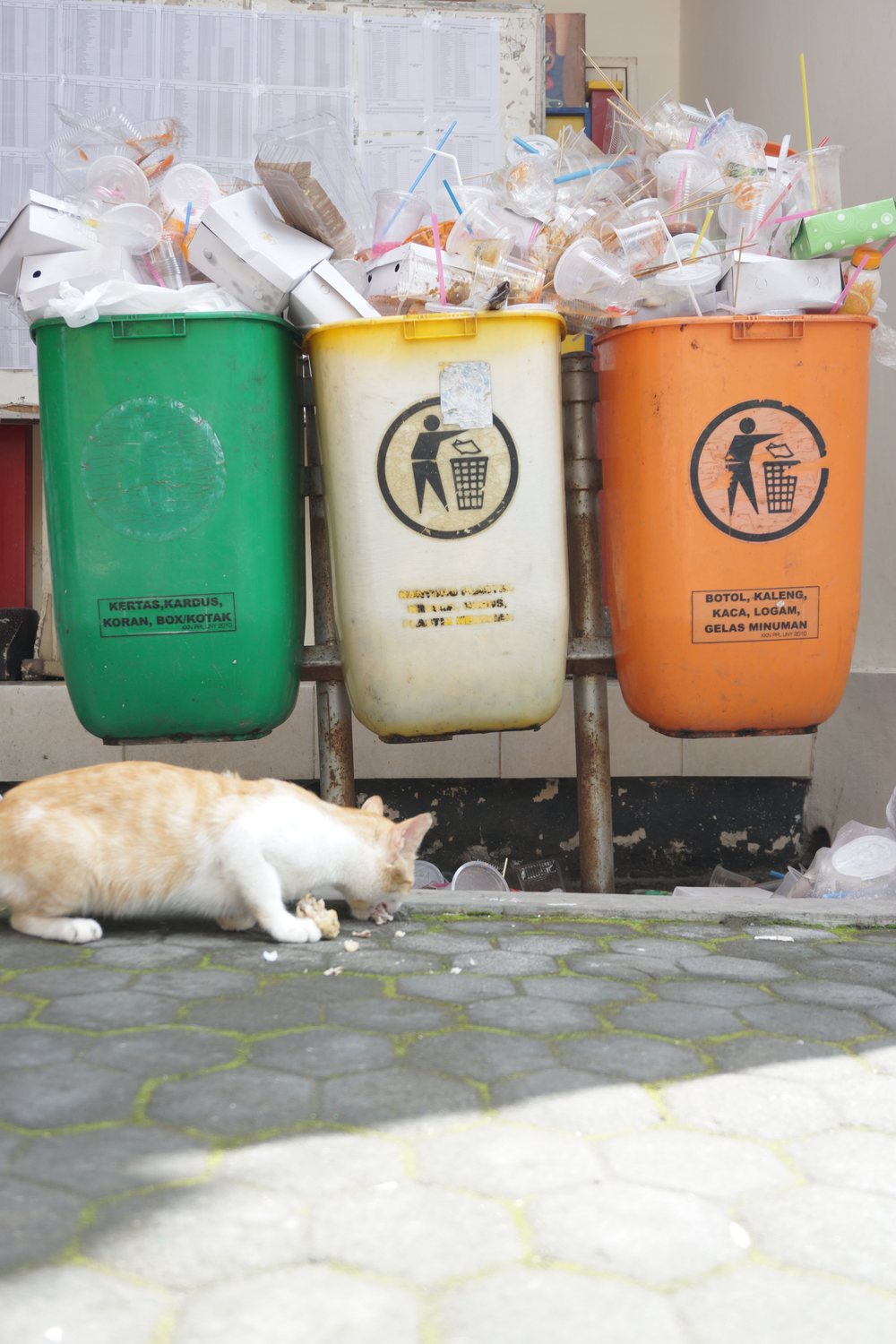 There are many reasons why cats develop a penchant for plastic, and these include medical, dietary and psychological reasons. For example:

If a cat is suffering from nutritional deficiencies, perhaps due to a poor diet, it may turn to other food sources to supplement its diet.

Since plastic bags may contain animal derivatives such as gelatin or minerals like stearates (salts of stearate acid), the cat could instinctively begin chomping on your plastic shopping bags as a way of gaining extra nutrients or minerals.

There are several medical conditions that can also mean a cat is unable to receive all the nutrients it requires from its food.

For example, illnesses such as inflammatory bowel syndrome, hypothyroidism, diabetes or intestinal parasites could mean your cat is not able to gain enough nourishment from its regular food, so again, it turns to plastic as a way to try to supplement its diet.

3. Taste or scent of food on a shopping bag

Sometimes, your shopping bags will retain the taste or odor of the food you were carrying in them, which may make the bags attractive to the cat.

This isn’t necessarily a sign of any major problem – it’s just that the cat likes chewing the bag because it has a pleasant flavor.

Cats are intelligent animals, and although we might tend to think they spend most of their lives asleep, they also need plenty of stimulation to keep them interested or they may develop psychological problems due to boredom.

Cats – and dogs – may sometimes display behaviors like eating grass as a result of the same issue – and in cats particularly, eating plastic serves the same purpose.

At the same time, cats that are stressed or suffering from anxiety may also display similar behaviors, and this could be due to anything like children playing with them too much, a new baby arriving in the house or being bullied by another cat.

When this happens, chewing on plastic could be a manifestation of these kinds of psychological problems.

Sometimes, cats just appear to like the sound and feel of a plastic bag. It makes a noise that they enjoy, and the way it moves may be fun for them.

6. Some breeds are more susceptible

Note that some breeds – particularly Burmese and Siamese cats, are more susceptible to pica in its various forms, so you should keep an eye on what cats from these breeds eat in particular.

What to do if your cat eats plastic 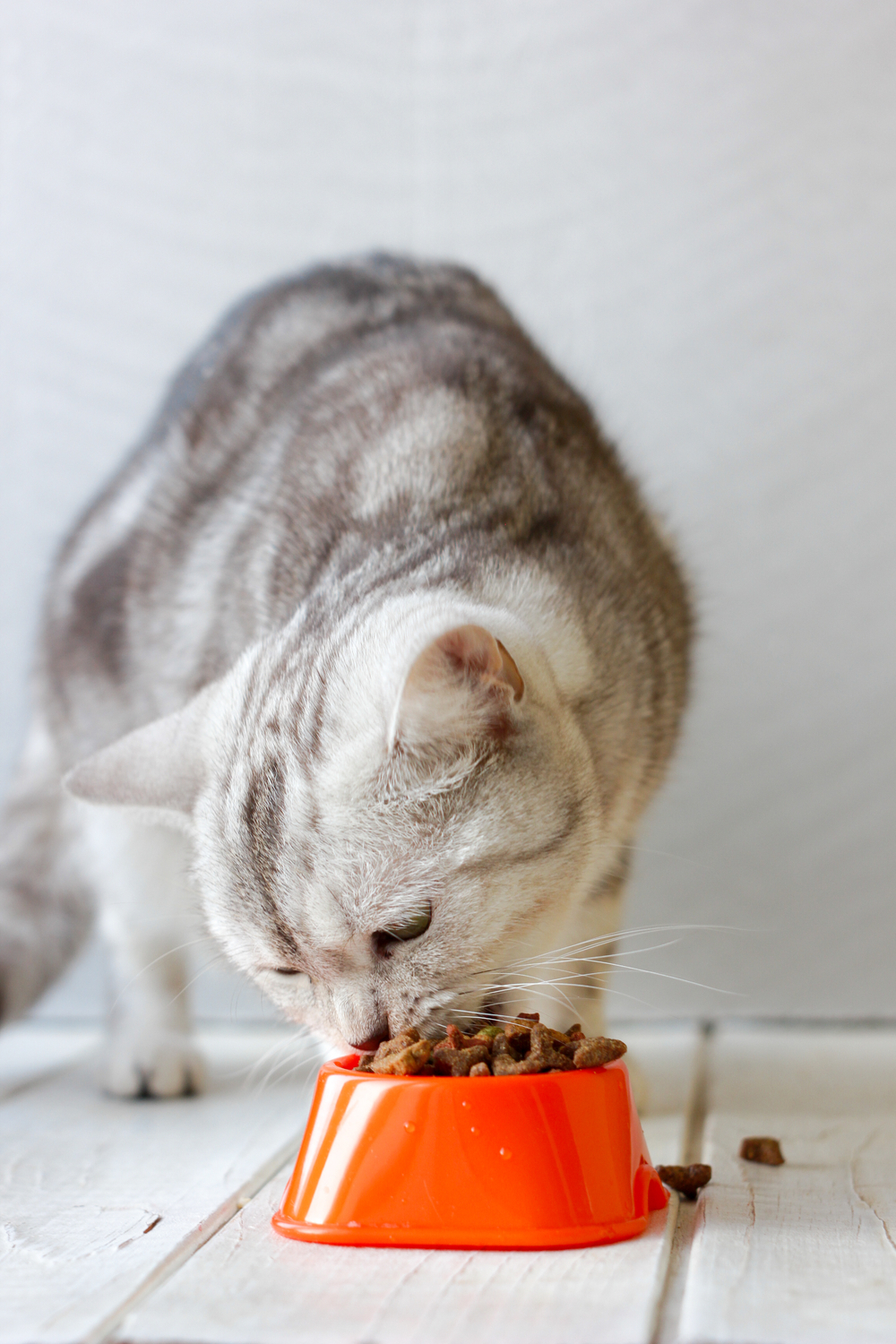 The first thing to do if you see your cat eating plastic is to try to work out why the cat is indulging in this behavior.

Unlike behaviors such as eating grass, which can be largely harmless much of the time, eating plastic should always be discouraged. If you see your pet consuming plastic, you need to know why because if you know the reason, it will be easier to prevent this behavior in the future.

Having said that, if your cat seems to want to bite into anything it comes across, there’s probably less to worry about. It could be a sign of boredom, but it means your cat isn’t drawn to plastic in particular.

However, if your cat develops a preference for munching on all things plastic, this could be an indication of a more serious problem.

Once you think you know why your cat is eating plastic, here are the steps you should take:

Health – take your cat to see a vet

If you think your cat has started eating plastic due to a health issue, you should take him to see the vet to get checked out.

We’ve already mentioned a range of health problems that can cause this behavior, and you should also look out for other symptoms that may tell you that your pet is sick.

These may include changes in behavior or an unwillingness to be petted or picked up. You know your cat, so if you notice personality changes alongside plastic-eating behavior, a trip to see the vet could be a smart move.

Remember, cats can’t tell you that they’re sick – and unlike dogs, they’re quite good at hiding it too, preferring to look after themselves. This means with cats, you need to be tuned in to any subtle changes to ensure you notice if anything’s amiss.

Feeding your cat a poor-quality diet or one that isn’t balanced enough could be a cause of plastic-eating.

Cats are obligate carnivores, meaning they get all their dietary requirements from eating meat, so cat food that contains high proportions of other ingredients is not advisable.

Cats need a diet that is high in protein, contains a moderate amount of fat and is extremely low in carbohydrates.

Check the packet or tin of the cat food you normally buy and look for things like chicken, turkey, fish or liver. Avoid foods where the ingredients prominently feature items such as “grain” or “by-products”.

You may find that simply changing the brand of cat food you provide for your four-legged friends will cause the plastic-eating to stop.

Think about anything in your home that could be causing a cat to be stressed and also look out for other indicators. These may include behaviors like hiding in dark places, being quiet or shy, avoiding people, being aggressive, scratching your curtains or excessive grooming.

Any of these behaviors can indicate that a cat is stressed, and if you notice more than one alongside eating plastic, it’s a good indicator that your cat is less than comfortable in his environment.

In this case, the best thing you can do is to try to identify and remove anything that is causing your cat stress to see if this improves the situation.

Similarly, a cat may be eating plastic simply because it’s bored or lacks stimulation. If none of the other reasons for plastic-eating seems to fit, think about some ways you can make your cat’s life more stimulating.

Suggestions for stimulating your cat 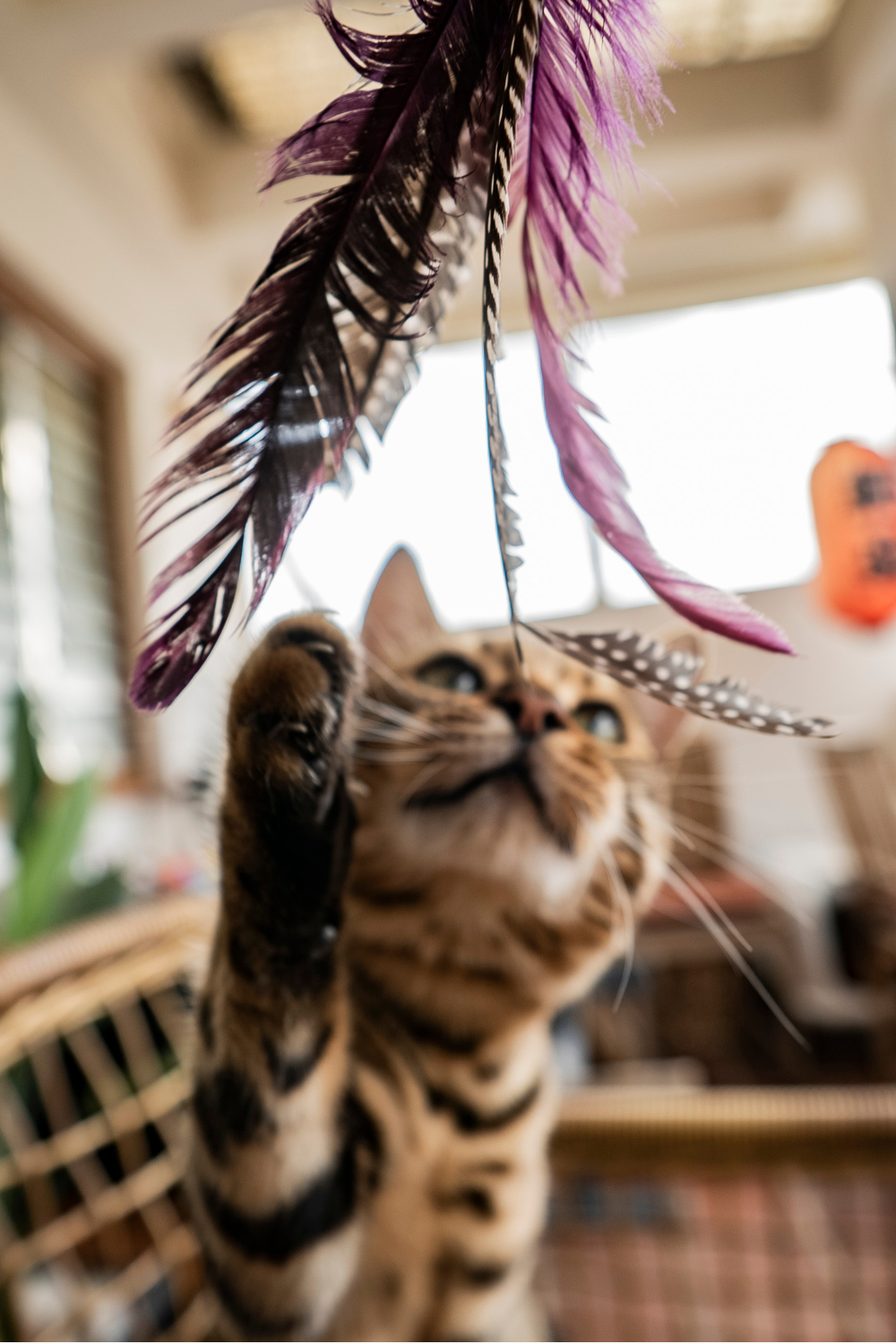 Cats enjoying playing with toys. It keeps them interested and can also help stimulate and assuage their natural predatory instincts to hunt.

However, just giving a cat one or two boring toys to chew on is not going to do it – you need to find toys that will challenge your cat and that your cat enjoys playing with.

Remember to change the toys from time to time to keep things interesting – think about it, you would get bored if you only had one toy to play with your whole life too! – and pay attention to the kind of toys your cat likes so you can buy similar ones in the future.

Spend time playing with your cat.

Some people may like to joke that haughty and aloof cats care nothing for their humans other than as a way to obtain food, but this is simply not true.

Cats enjoy playing and interacting with people, and they benefit from the time you spend with them.

Conversely, if you don’t give them enough time and love, they will develop undesirable behaviors, which may include eating plastic, among others.

Find ways to stimulate all their senses. Don’t just give them a toy to chew on or chase, provide them with activities that engage them in terms of smell, taste, texture, sound and more, and you will find that they are much happier animals.

Provide them with an environment that allows them to explore, something that’s even more important if yours are house cats that never go outside. Nowadays, it’s possible to buy all kinds of platforms and other apparatus for cats that will keep them occupied while inside.

If cats love the sound and feel of plastic bags, try giving them something else that replicates those sensations. Perhaps something like baking paper might be preferable to a plastic bag, so you can see how they react to playing with that instead.

Other steps to take

Even if you work out why your pet started eating plastic in the first place, by the time you make the adjustments, the plastic-eating could have already become an ingrained habit, in which case you’ll need to work a bit harder to prevent it.

Here are a couple of suggestions that can help:

If you remove access to plastic as much as possible, your cat won’t have the opportunity to play with it or eat it – and this might mean storing plastic bags away somewhere the cats can’t get it.

You probably won’t be able to stop your cats coming into contact with plastic completely, but doing what you can is sure to help.

It’s possible to buy special sprays to use on items you don’t want your cats to chew. The spray is harmless but gives items an unpleasant bitter taste, discouraging kitty from biting into it.

This won’t work alone, but used with some of the other suggestions we’ve given you, this could be an effective deterrent.

If all else fails, you can call in a cat behavioral specialist. These guys might not be cheap, but they’ll probably be able to solve the problem – so it’s something to consider as a last resort.

How do you know if your cat has swallowed plastic? 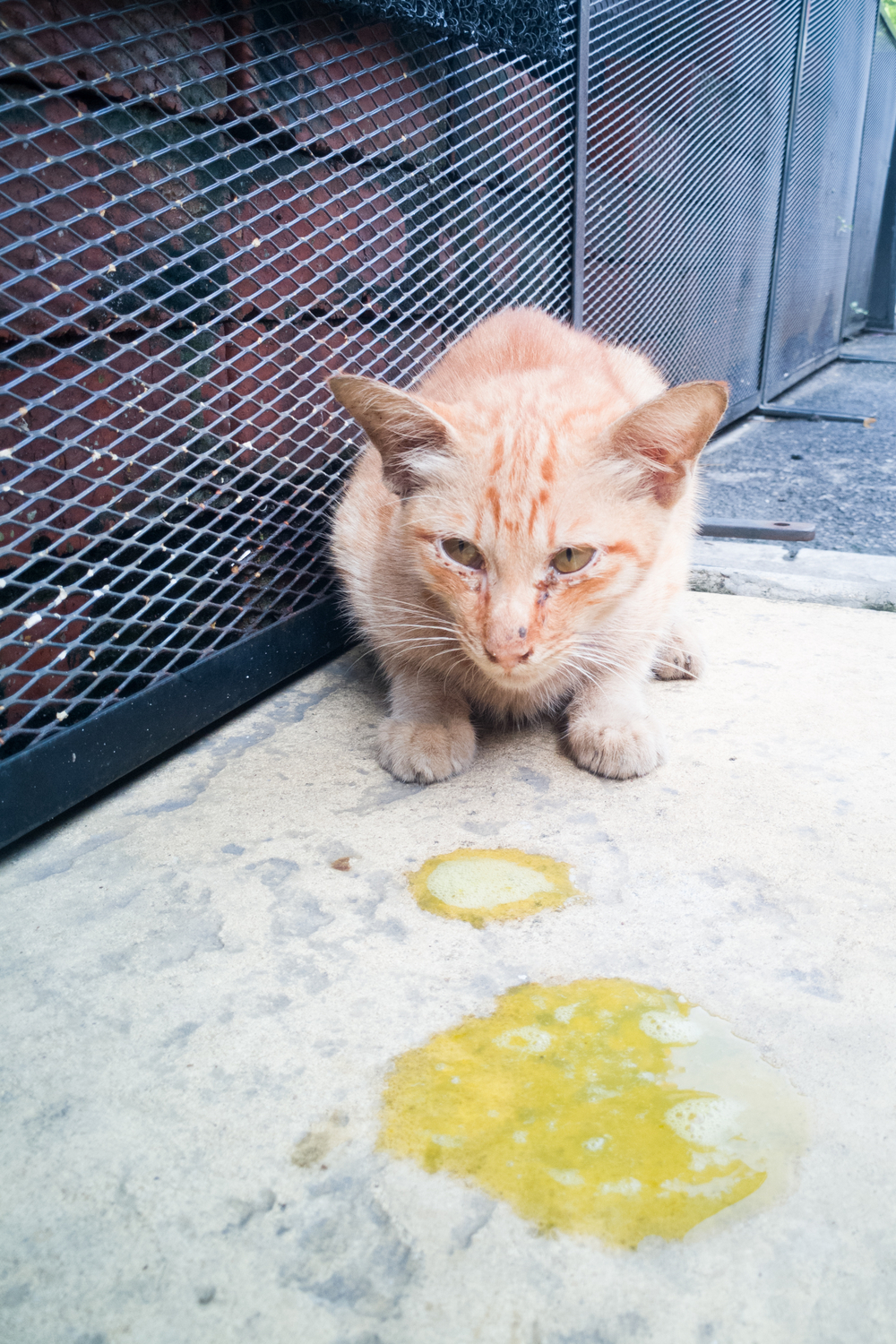 If you suspect your cat has already swallowed some plastic, this could cause serious problems. It could block up the digestive tract, it could choke your cat, or it could prevent your cat from eating. Here are some of the tell-tale signs to look out for:

If you think your cat has eaten plastic and is displaying any of these symptoms, you should take her to the vet as soon as possible.

Pica is common in cats as well as dogs, and it can occur for a range of different reasons. However, unlike something like grass-eating, plastic-eating should always be discouraged since it can cause serious health issues for your pets.

If you see your cat eating plastic, try to find out what is causing the behavior. Then, once you know why your cat is eating plastic, whether it’s for health, dietary, psychological or other reasons, you can then take steps to prevent the behavior from happening again.