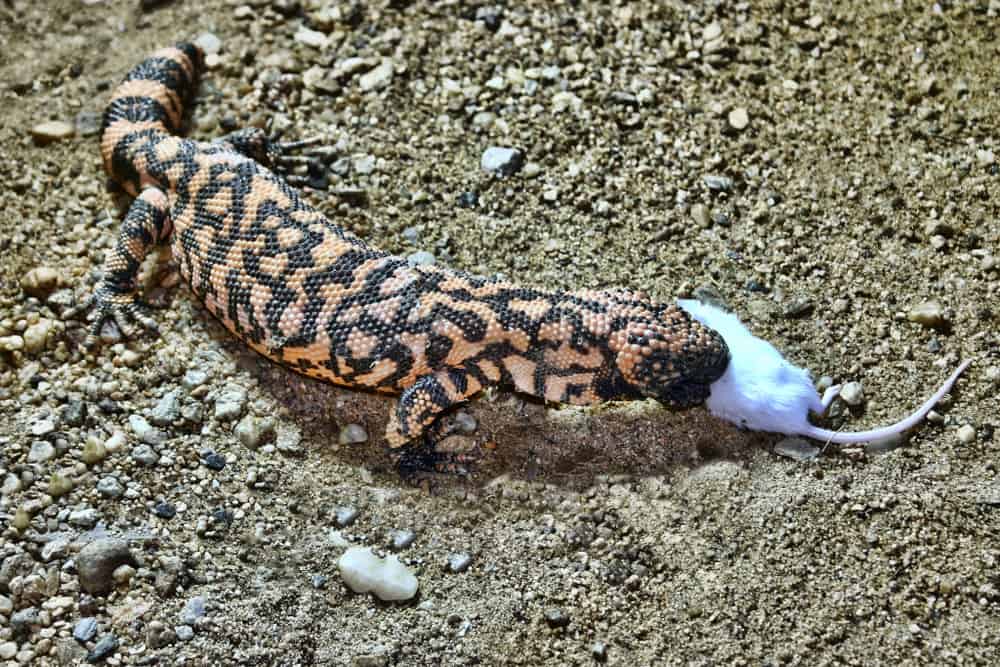 Gila monsters are peculiar lizards that have characteristic heavy bodies and hard scales. They have black and pink or black and yellow bodies. The species relies on a strong venom to incapacitate its victims. Besides that, it also has a very firm grip that other animals cannot get free of.

In this article, we will see what do Gila monsters eat and will review some fun facts about them.

Gila monsters are loners that live in a few North American desert regions. However, they do need some moisture for sustenance. The species create burrows in rocks and tend to roam around covered or semi-covered areas. You can rarely see the animal in the open, where it would be susceptible to predators.

Like many other lizards, the Gila monster depends on sunlight and temperature. But they cannot hunt when it is too hot. In such cases, they would go out only during the night. The animal walks awkwardly, swinging its tails from side to side for balance. Although not particularly fast, the lizard is a great climber.

As the weather gets colder, they will burrow deep into the ground with their sharp claws. Sometimes, they will occupy burrows of other species. Once they settle, they will stay there during the winter.

The species is not known for its eyesight. Like some other lizard species, they rely on their forked tongue to track prey. By using it, they can smell and taste other animals in the air. Given its lack of speed, the Gila monster relies on its cunning and the ability to meld with the environment.

Here are some of the lizards most common habits:

What do Gila monster eat in the wild?

The animal relies on its toxic bite and strong jaws to subdue its prey. Once the Gila monster catches them, it will seep poison into their bloodstream. Meanwhile, it will maintain a strong grip on the victim by using its bite. Furthermore, the lizard’s bite is so strong that it can crush other animals. If the prey is really small, they will just swallow it.

Gila monster is a very proactive hunter. As soon as they make a kill, they usually continue searching the next nearby prey by flicking their tongue. The species has a major advantage on rocky, hard-to-access terrain but usually struggles to catch anything in the open. The lizard can climb cacti, trees and crawl almost upwards.

Although you might think that the species is voracious, it isn’t necessarily so. They will only have three to four large meals during the spring as a preparation for the winter. While they might not necessarily hunt for additional food, they will still catch any suitable animal that crosses their path.

Like other inactive animals during winter, the Gila monster requires a high quantity of proteins and fats. In addition, they also require certain nutrients like iron and calcium. As long as they have a diverse and plentiful diet, they should get all these matters from their prey.

Newborns feed on their egg yolk during winter. It usually provides them enough sustenance to survive the season. Like all young, they have a much better appetite than the older animals. Hatchling Gila monster can eat 50% of its body weight during a course of a meal. However, it is worth mentioning that even adults can eat one-third of their weight in a meal. This is because they have a very slow metabolism.

Aside from its incredible venom, there are lots of other interesting things about this species. Here are the most intriguing fun facts about the Gila monster:

Gila monsters are the largest North American lizard species. They spend most of their lives underground and will semi-hibernate during the winter. During spring and summer, the animal will have 3 to 4 large meals that will last them throughout the year. The species stores all its fat in its tail and loves to eat eggs and small animals.

The lizard is known for its strong bite and toxin. Although deadly to smaller animals, it doesn’t represent any threat to humans. In fact, they are very timid and will run from anything larger than them.