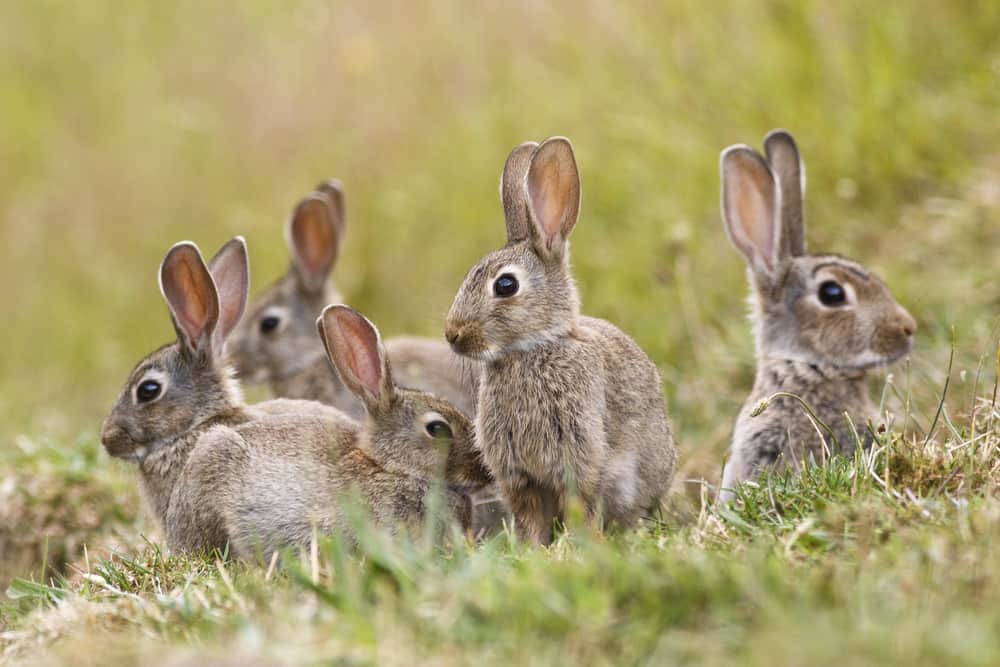 Rabbits, known throughout the world as fluffy little bunnies beloved for their docile, good-natured manners as pets, and for their gamey flavor as meat, are perhaps some of the most common mammals on earth.

They are undeniably cute, but often misunderstood animals which not everyone knows how to properly look after. For example, should we really feed them carrots like Bugs Bunny (the Looney Tunes character)? Are pellets healthy, or fattening?

In this article, it’s our hope that we can shed some light on the fascinating history of rabbits as wildlife, food and pets, whilst also providing information on their appearance, habitats and habits, as well as their wild and domesticated diets.

Once you’re done reading, we hope you’ll be better prepared to get yourself a pet rabbit (or four!), or to better look after the rabbit you already have. Let’s talk about rabbits! 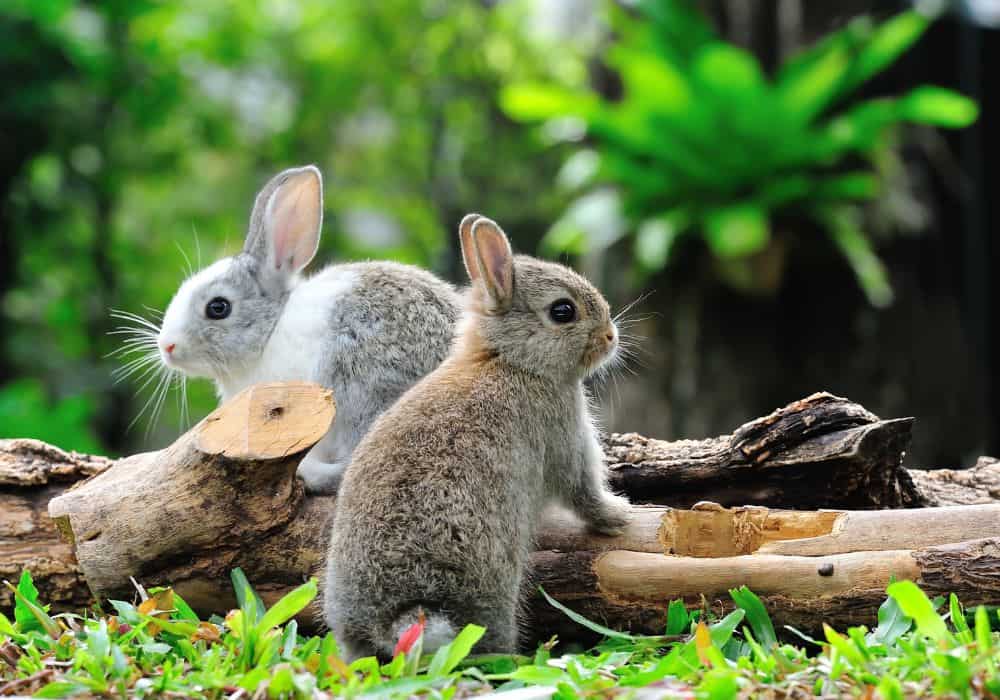 The History of Rabbits

Rabbits are small, fluffy, grazing mammals belonging to the biological family Leporidae (alongside hares) and of the order Lagomorpha (where you’ll also find pikas – the inspiration for the world-famous Pokémon Pikachu!). The scientific Latin name for rabbits is Oryctolagus cuniculus, meaning ‘a digger of underground passages that’s a little like a hare‘!

Bunnies (another name for rabbits) were once upon a time found only on the Iberian Peninsula (modern day Spain). There, these little herbivorous grazers langured in the humid heat, protected by shrubland and with plenty of food to nibble on.

Interestingly, the Spanish word for Spain – Hispania – reputedly comes from a phrase ancient Phoenician merchants used to use to describe the land and the animals they found there, when travelling on their famous ships. They called it ‘I-shephan-im’, or ‘Land of the Rabbits’, which was later translated as ‘Hispania’.

When the Romans arrived in Spain in the 2nd Century BCE, they cottoned on to the fact that rabbits made excellent meals, and began farming them. The Roman Empire, at its largest, spanned much of the so-called ‘known world’ at the time, and it was thanks to this that trade of rabbits soon saw them colonise every continent on the globe (except for chilly and remote Antarctica).

Much later, it is believed that the practice of monks at monasteries keeping rabbits in cages (still for food), led in turn to the domestication of these adorable little critters. The practice grew in popularity, and with the Industrial Revolution, many countryside citizens brought their meat rabbits with them when they moved to the cities of Europe.

Eventually, come the Victorian Age, the aristocratic classes took a liking to bunnies, and began breeding them specifically with the aim of creating interesting looking (and sometimes tasting) rabbits for sale as pets, and use at awards shows.

Finally, the modern pet rabbit was born! Today, there exist 13 wild species of rabbit and 305 breeds of domesticated pet rabbit.

The Appearance of Rabbits 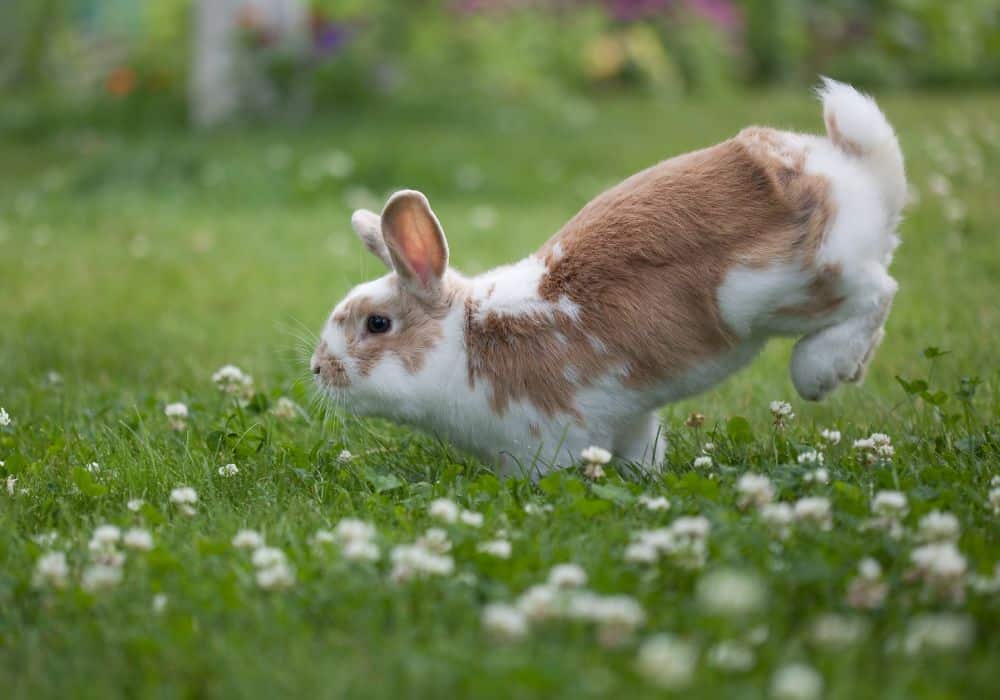 Bunny rabbits are gorgeous wee things… but I guess we better be a bit more scientific in our description! They have large, floppy ears and long, stretchy bodies which sit very low to the ground on a set of short front legs and much longer, extremely powerful back legs (used for jumping and running).

Rabbit eyes are situated on the side of their heads which, combined with head movement, gives them a near 360° field of vision. In fact, the only thing rabbits cannot see is whatever is directly in front of their noses. Thus, in order to determine if something is edible or not, they touch the object with their hyper-sensitive bottom lip. Bunnies also have an extremely keen sense of smell.

They are covered head to toe in a very soft fur, long or short depending on the breed, complimented toward the rear with a little fluffy tail (called a ‘scut’). One last important thing to note is that rabbit teeth grow extremely quickly (at a rate of 5 inches per year!). They require this because they are constantly grazing and gnawing, which is why it’s so important to feed them a natural, wild-imitation diet as pets.

In the wild, rabbits dig themselves homes called burrows. A rabbit’s burrow is a complex system of tunnels and caverns in which they and their group live together. A group of different rabbits’ burrows all joined together is called a ‘warren’.

Warrens are incredibly important to wild rabbits, because they are naturally what are known as ‘prey animals’. In other words, they are right at the bottom of their food chain, and the main source of food for a wide variety of animals both on land, and in the air.

As such, rabbits have developed a clever system of communication (see below), and have evolved to be nominally crepuscular, but largely nocturnal.

This means that, though they do sleep a fair amount during the day in captivity, in the wild they sleep throughout around a full 8 hours of the day, becoming active only during twilight hours and at night, when risk of predation is lowest.

Rabbits in the wild are found most commonly in meadows, woods, forests, grasslands, deserts and wetlands. Today, the environmental climate crisis being caused by we humans continues to threaten wild rabbit populations, despite their incredibly rapid rate of breeding.

All animals talk to members of their own kind, but rabbits have developed a very interesting means of communication, utilising both body and voice.

Thumping tails: In the wild, rabbit tails are white on the understand, just like hares’, and they use this clear white ‘flag’ to signal to other members of their group when danger approaches. This early warning system, accompanied by a distinct ‘thumping’ sound, helps to save as many grazing rabbits from predators as possible.

Growling: Just like dogs, bunny rabbits growl to say that they are angry and want to be left alone.

Purring: Like cats, bunnies will purr when happy and comfortable; which is handy since it lets owners know when they are doing the right thing!

Squeaking: Squeaks are the main mode of rabbit communication, but the context of the squeak can mean lots of different things. If two rabbits are sitting close to each other and squeaking, then this is a sign of a close and almost-familial bond (they’re friends!). However, if a rabbit squeaks when you pick it up, or when fighting another rabbit, it means that they are scared, hurt, or something else is wrong.

Teeth-grinding: Rabbits don’t grind their long, sharp grazers’ teeth very often, but when they do it’s most likely a sign of pain and/or discomfort. Listen out for it, and phone your vet if you hear them doing it!

There are over 300 breeds of domestic rabbit these days, so we won’t name them all here. Nonetheless, here’s a list of some of the most popular pet rabbit breeds:

What do pet rabbits eat & how often should you feed them? 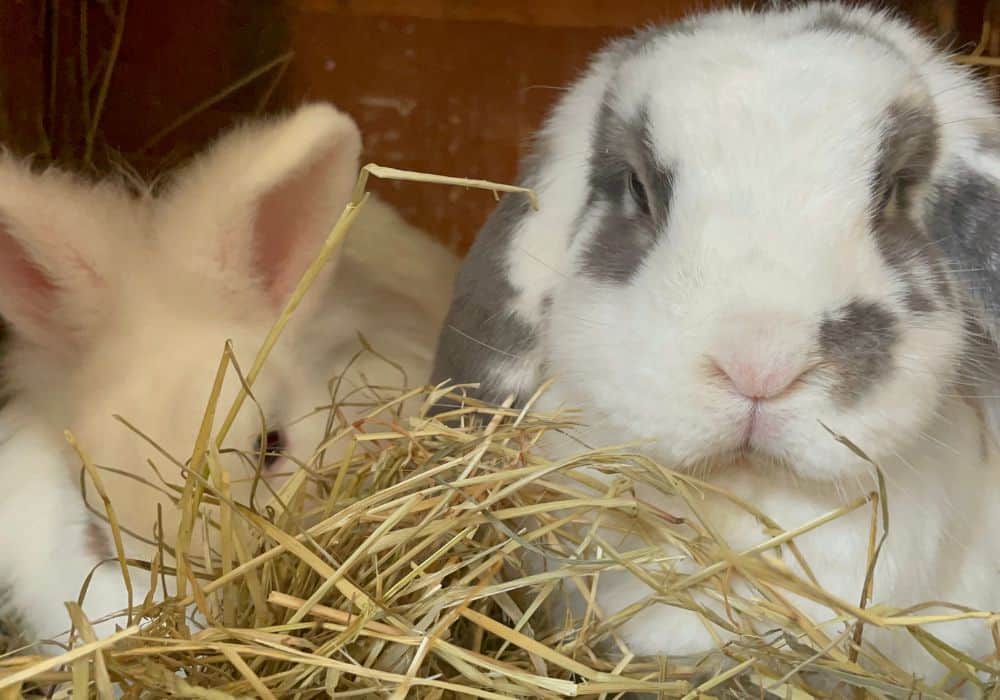 The most important thing to understand about rabbits – whether domesticated or wild – is that they are ‘grazers’. This is a literal term, meaning that they eat constantly, throughout the day. They’ve evolved to do this, and it’s necessary for their survival!

As such, you should ensure that your pet rabbits have a constant source of healthy food around them at all times of the day. They best grazing food for your rabbits is hay and grass hay, particularly a high-quality type of hay.

Here’s a list of great hay options for a pet rabbit’s diet:

In addition to their grazing foods, you should supplement their diets with plenty of healthy, iron- and protein-rich dark leafy greens on a daily basis. Doing so helps to get them the correct vitamins (calcium etc.) and nutrients they need.

Here’s a list of leafy greens safe to feed your pet rabbit in addition to hay:

If you’d like to give your pet bunnies a treat from time to time, then there are also some fruits and vegetables which it’s safe to give them, but which have a particularly high sugar content or a little difficult for rabbits’ digestion (despite their two-fold digestive system!). 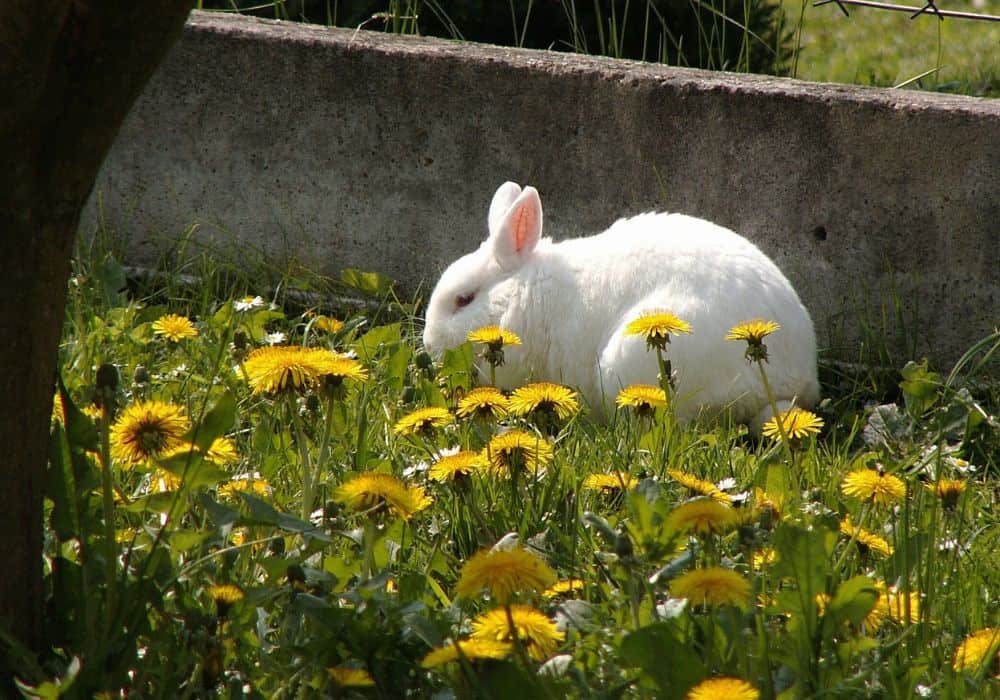 As such, you should only give them the following treats in small quantities, and infrequently (1-2 times per week):

In addition to the above foods, make sure your rabbits have a constant and plentiful supply of fresh water, topped up every day.

Strangely, rabbits also eat things called ‘cecotropes’, a fancy word for… poop! Yep, that’s right, bunnies excrete two different types of poop, and one of them is really rich in protein and other nutrients. As such, they eat it back up to ensure they don’t waste anything from their food.

Studies have shown that bunnies who eat their own cecotropes, or the cecotropes of others, grow more quickly than bunnies who are prevented from doing so. Thus, if you see them doing this, let them! It is natural!

What do rabbits eat in the wild?

In the wild, rabbits eat mostly hay and grass hay, but will also dine out on flowers, twigs, leafy green vegetables, farm crops (hence why farmers often view wild rabbits as ‘pests’), bark, and other ground-level grazing plants they find (and which they sense as safe to eat). In essence, rabbits eat much the same thing in the wild as they should be fed as pets.

How much do rabbits eat?

Rabbits are grazers. They eat constantly, for as long as they’re awake and not tunnelling or mating. As such, it’s safe to leave as many of the healthy hays and leafy greens (see above) around as you like.

Your pet rabbits will munch and munch and munch, but they’ll also process and digest the food quickly, without putting on excess weight. Just make sure you compliment this grazing lifestyle with plenty of activity-time, out in the garden or around the house, for example. 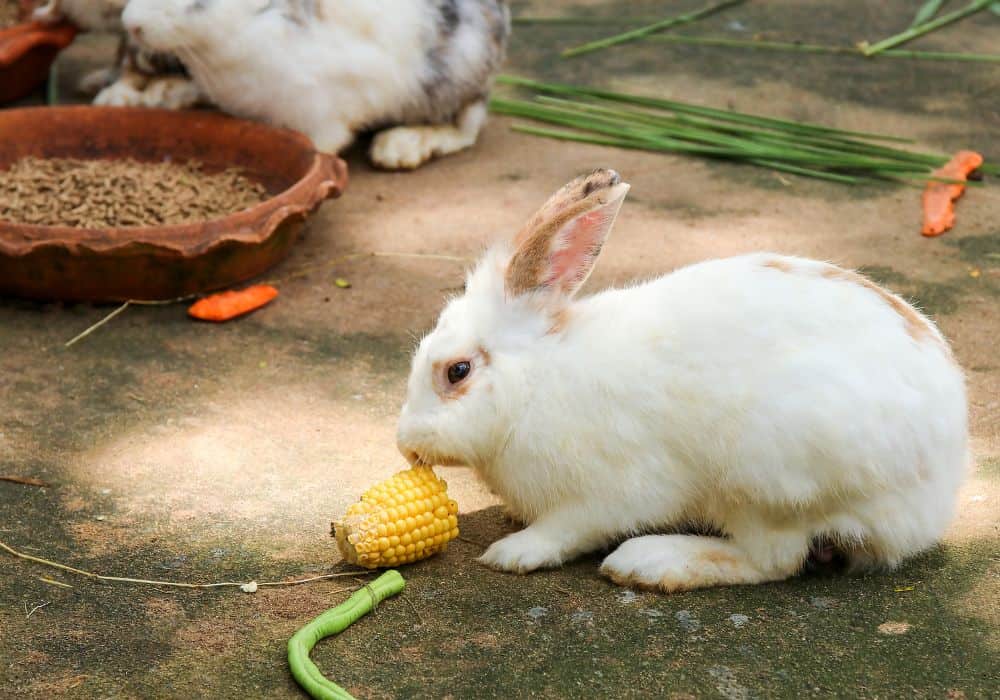 There are quite a lot of different foods and types of food which can make rabbits extremely sick, or even put them at risk of death. Avoid giving the following foods to rabbits at all costs:

Bunny rabbits have been around for a really long time, and their status today as fun and friendly household pets is, in large part, thanks to their historic role as status symbols and food! They make for really great pets. Unfortunately, however, they do have sensitive stomachs, and so you must take great care over what you feed them, and how often. Hopefully, this guide to wild and domesticated bunny rabbits will help you give your favorite pet(s) a wonderful, happy, and healthy life.