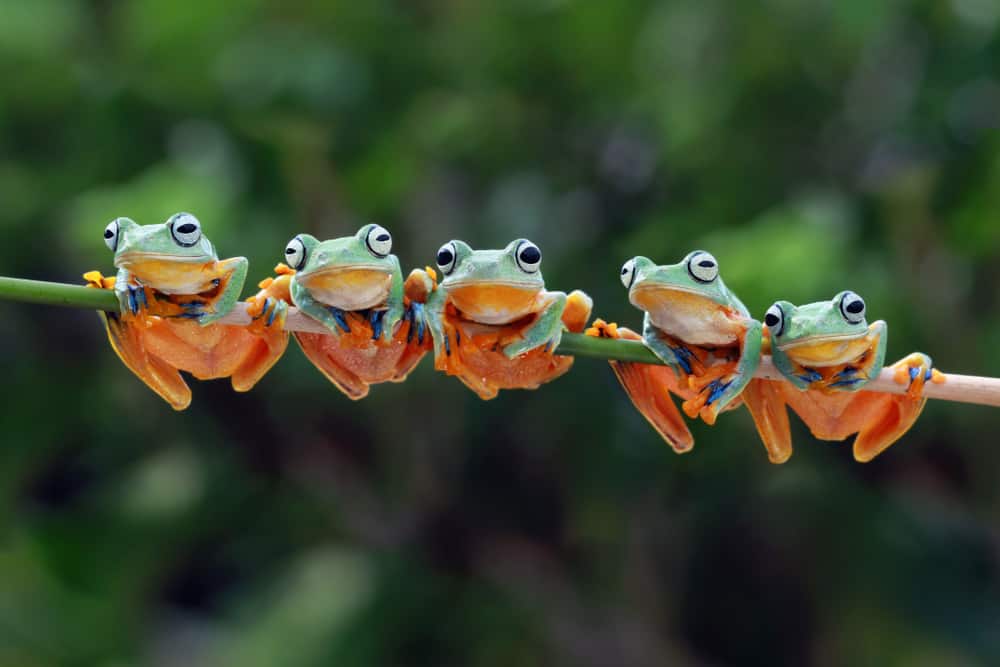 Frogs live all over the world, and for millennia human beings have been interacting with these tailless amphibians. This is the main reason why frogs of all kinds have become symbolic to various cultures across the world—and for different reasons.

That’s exactly what this article focuses on. Below, we discuss general frog symbolism, what frogs mean to different cultures and religious groups, and how they’re represented in mythologies and folklores. Frog spirit animals and other cool information are also discussed.

There’s a lot to cover, so let’s begin! 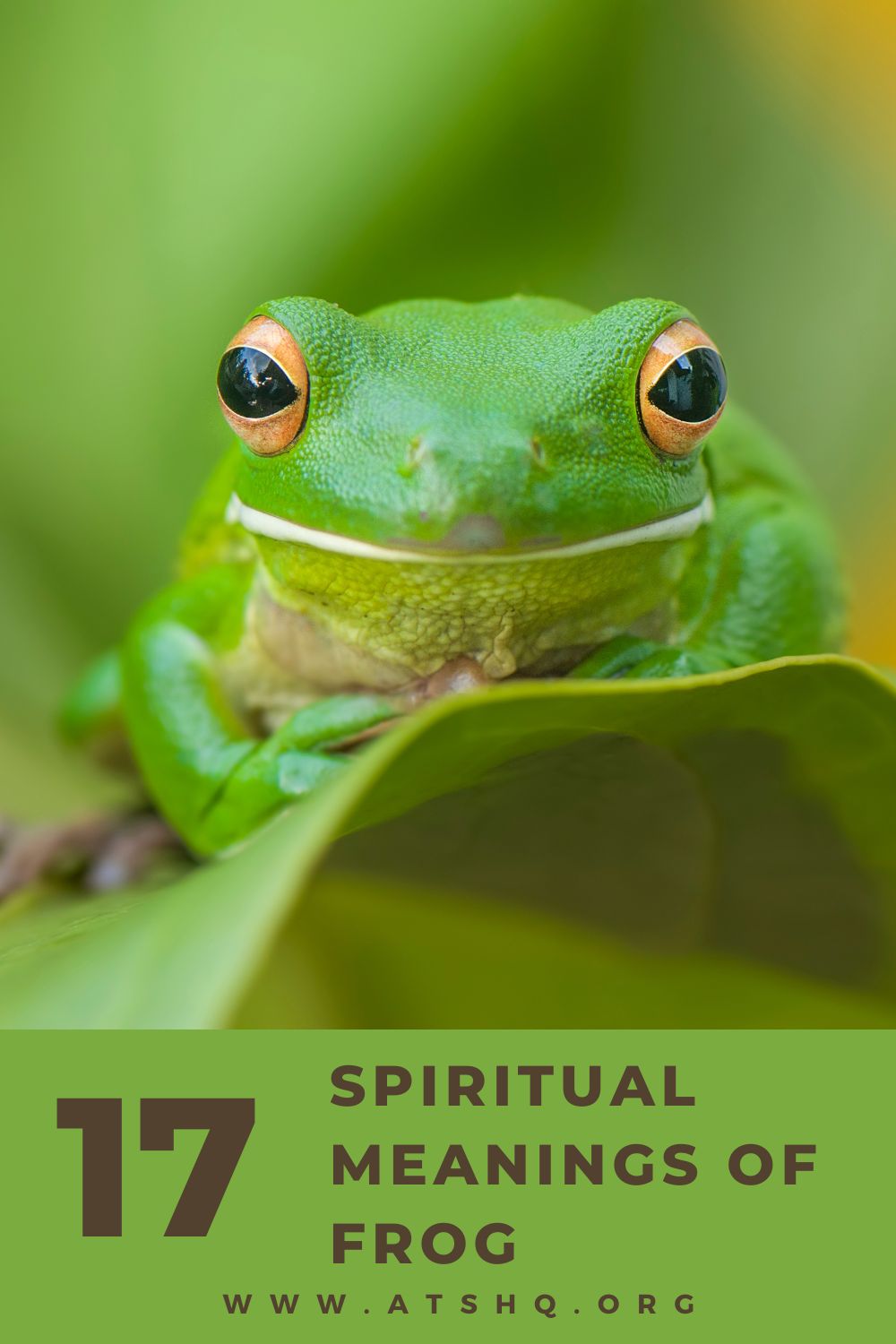 What Do Frogs Generally Symbolize?

A lot of creatures symbolize fertility, and the frog is one of them. The main reason why the frog is associated with fertility is that females can lay nearly 20,000 eggs during a single mating season. They’re also associated with abundance because of their remarkable ability to reproduce in great numbers.

Additionally, the fact that they need water to live means they’re inextricably tied to water (which is often associated with life). Frogs being associated with fertility is one reason women who are trying to conceive embrace frog emblems and symbols during this time.

The frog is a symbol of good luck in many cultures, so if you see one hopping along in front of you, it’s likely good things are on the horizon. This is why you’ll see frog emblems at casinos and featured on games of chance (along with crickets and other creatures that have been historically associated with good luck).

Moreover, dreaming about a frog is likely to bring good luck. But because they are closely associated with good luck, this means if you kill one, bad luck is sure to be in your future. So always be careful when you’re out walking about in the wetlands, as stepping on even the tiniest of frogs could ruin your day.

Prosperity is also associated with the frog, and throughout Asian countries in particular you’ll see a lot of frog emblems and statues because of this. New opportunities are sure to be on the horizon for those who are in good standing with the frog spirit, and money is sure to follow.

The frog is specifically symbolic of quiet prosperity, meaning it’s symbolic of those talents and skills that may not lead to prosperity at first but eventually yield success, wealth, etc. In short, embracing the spirit of the frog may very well lead to a very prosperous life. 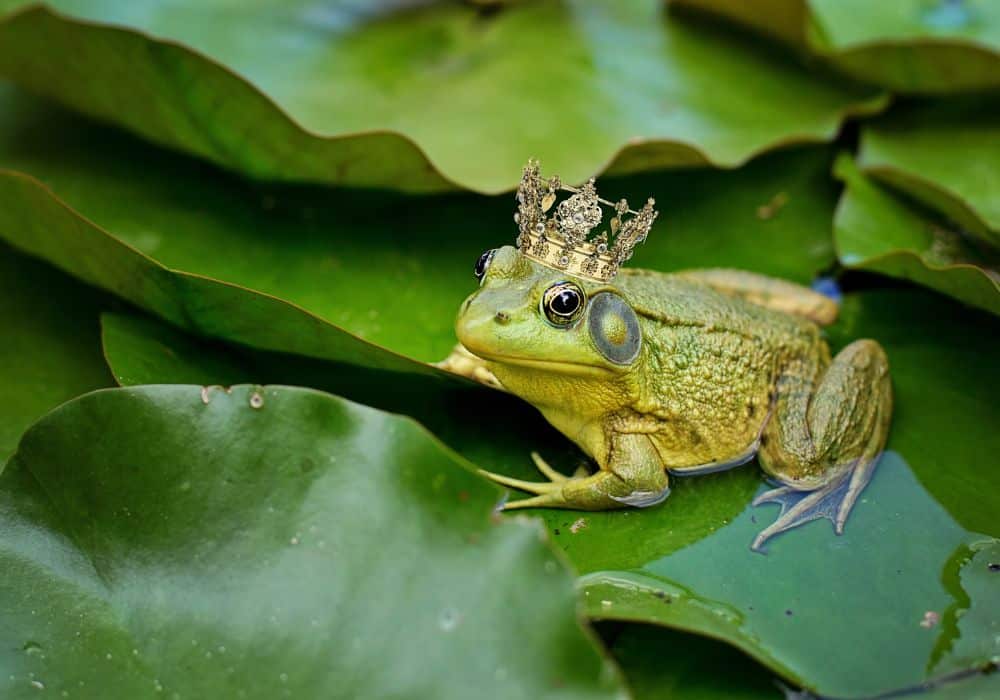 Although their lifespan is relatively short, the process of going from an egg to a tadpole, to an adult frog is quite an interesting one in nature. First, the tadpole will grow arms and legs until it can fully hop, ribbit, and snack on unsuspecting flies with its ultra-quick tongue.

It’s truly an incredible metamorphosis, and this is one reason why the frog is often associated with transformation. Along these lines, those who have a frog as a spirit animal often have an easy time with the transition, whereas others struggle.

Think about a frog hopping along on the lily pads in a near-motionless pond. It’s quite a tranquil setting, right? This is in part why the frog is associated with purity. It dives into the water and comes out clean, and it’s usually hanging around lotus flowers and water lilies, which are also associated with purity.

But despite being associated with purity, the frog also symbolizes the truth that purity is not as important as renewal, as every day we have new opportunities to be better than we were the day before.

What Frogs Symbolize to Different Cultures 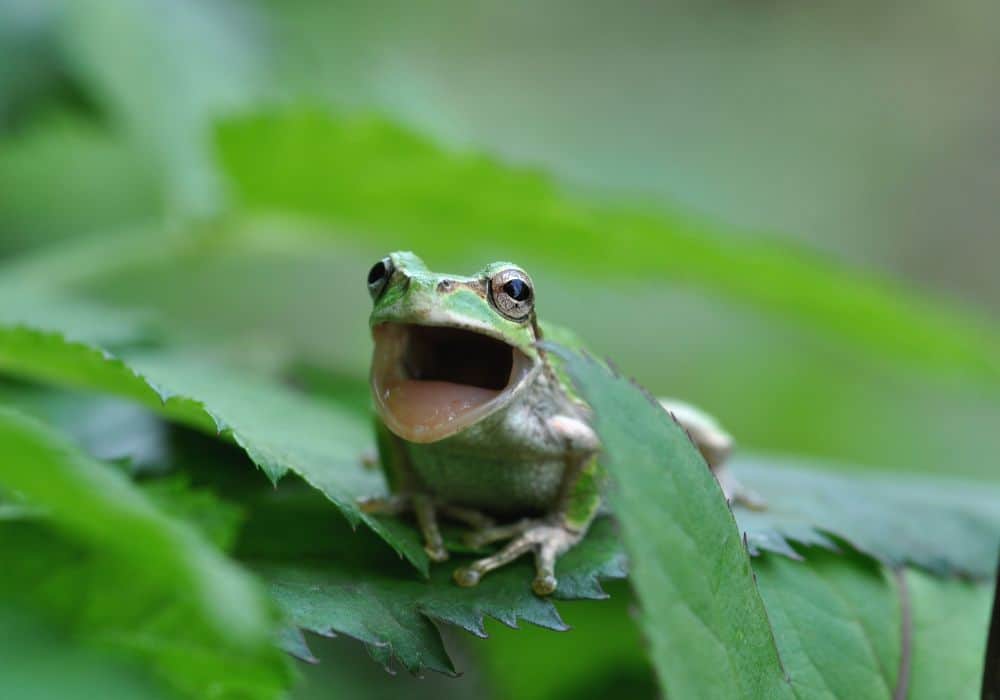 Although frogs live in similar habitats around the world, they have lived alongside human beings with different beliefs, traditions, practices, etc. And factors like the environment have also played a huge role in developing the relationship between frogs and humans.

That being said, there are some similarities when it comes to how different cultures view frog symbolism, and of course, there are plenty of differences as well. Let’s discuss both in detail on a culture-by-culture basis.

In Native American cultures, the frog symbolizes a variety of things, and some are good while others are bad. In short, the way the frog is viewed varies from tribe to tribe.

But these creatures were viewed favorably by and large when they came out in the spring, as this was a signal that the time of rebirth was underway.

And in Southern California specifically, the frog inspired tribal dances, and it was also a common totem animal for tribes in this area.

There’s also a story that’s told by the Penobscot and Maliseet tribes, one that involves a lake monster being turned into a frog by a hero to prevent a drought. And according to the Kuna, a golden frog can bring wealth, success, and even happiness after death.

There are so many more frog-related stories in Native American mythologies, which should underscore just how important these creatures were in the natives’ daily lives.

In Chinese culture, the frog is symbolic of yin, or female energy. Frogs are also associated with the full moon, another classic symbol of female energy.

There’s one story in Chinese culture that centers around a three-legged frog named Jin Chan, and the storytellers would say that the sight of this man would bring wealth and good luck to any mortal who cast their eyes upon him.

And in feng shui, the frog is thought to bring good luck and prosperity while protecting against bad luck.

The Japanese also viewed the frog as symbolic. In Japanese folklore, there is a hero named Jiraiya, and he rides a giant toad. He’s also a ninja, one who can shape-shift into a toad. Like the Chinese, the Japanese saw frogs and toads as emblematic of good fortune and prosperity. 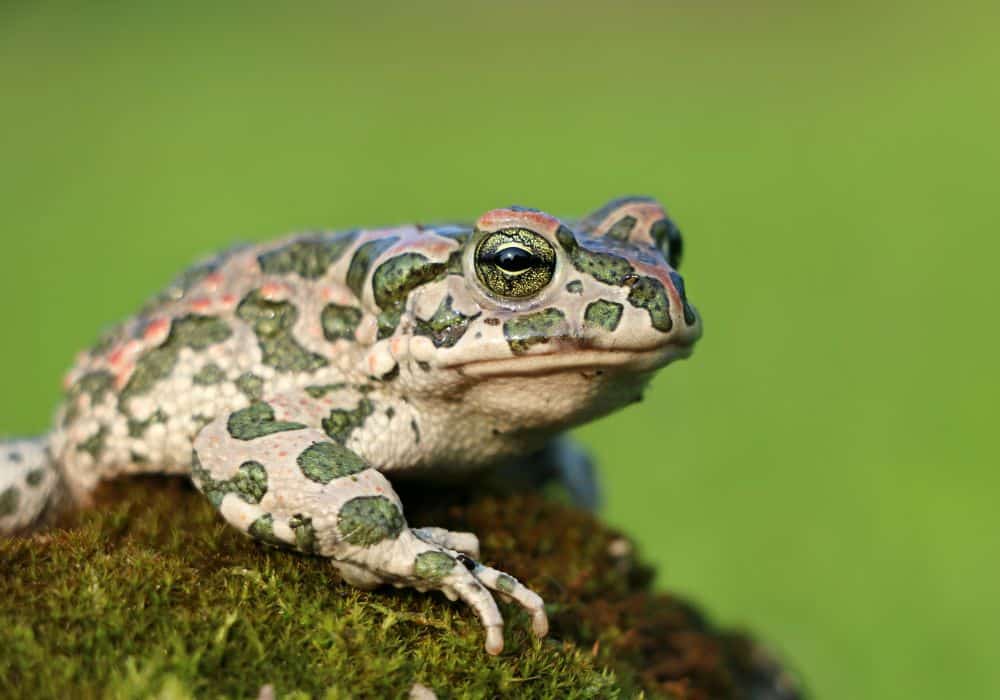 In ancient Egypt, a few deities were part frogs. Some of the Ogdoad of Hermepolis, for example, had frog heads, whereas the others had snake heads; both men and women had human bodies.

The Egyptians viewed these deities as the ones who brought order to the chaotic world after it was first created. Frogs are also common along the Nile because this is an ideal habitat for them. And it’s said that one day the goddess Heket, with her frog head and woman’s body, appeared to protect a woman midst childbirth.

In Celtic culture, the frog is seen as a deity with healing powers. Moreover, since they go to die where they are born, the Celts saw this as symbolic of the lifecycle. And in Ireland and Wales, the frog was seen as a tool of witchcraft—something from the underworld that was often used in potions.

It was also widely believed that burning a frog for ashes could stop a hemorrhage and that chewing on this creature while it was alive could stop a toothache.

The Celts also believed that frogs could predict the weather, and if a dark frog was spotted in the community, this was an indication that rain was coming, whereas spotting a light-color frog was thought to be an omen of drought.

In ancient Greek culture, the frog was seen as a source of comedy. Take the frogs in the play “The Frogs” by Aristophanes, for example. The chorus is made up of these fun frogs, and they comically harass Dionysus, the god of wine, and Xanthias as they travel to the underworld.

And a frog with an overinflated sense of pride and a silly nature is often something depicted in Aesop’s fables. For example, there’s one where the frogs lack control, so they go to Zeus for guidance. But when the frogs can’t complete a simple task, Zeus, being disappointed with them, has a heron eat them all. 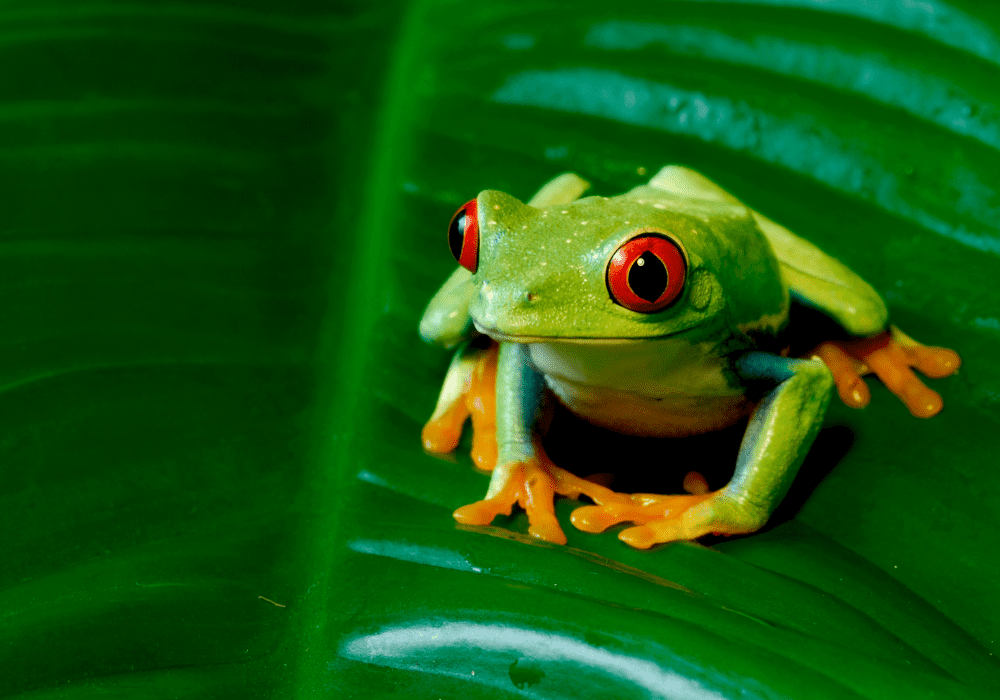 Frogs are referenced in most of the major religions. Here’s more on what frog symbolism means in Christianity, Islam, Hinduism, and Buddhism:

In the Bible, frogs are infamous for being one of the plagues sent to ancient Egypt in Exodus. Then in the Book of Revelations, they are associated with unclean spirits and negativity. This negative view of frogs explains why they became associated with pagan societies later on.

In Islam, on the other hand, frogs are revered and regarded as a symbol of devout faith. One story has it that when a frog croaks, it’s really saying “Subhaanah Allaah”, which translates to God is perfect.

And when Nimrod tries to kill Abraham, it’s a frog that saves him. Generally in Islam, it’s believed that you should show frog mercy, as killing one purposefully would be an affront to God.

Frogs and toads fulfill the role of protector in Hinduism, and they’re also emblematic of transformation. Moreover, the lifecycle of a frog is said to mirror the rise and fall of the sun each day.

There’s also a Hindu story that involves a king falling for a beautiful woman named Bheki. He marries her on the condition that they never go near water.

But one day Bheki gets thirsty and requests a glass of water, and when the king gives her what she asked for, she melts and disappears into the sunset, implying that she had turned into a frog.

In Buddhism, the frog is seen as wise and patient. Even though it is cannibalistic, it is not an apex predator, so it serves its place in the food chain. Buddhists also have a lot of appreciation for the singing the frog does.

What Frogs Symbolize in Mythologies and Folklore 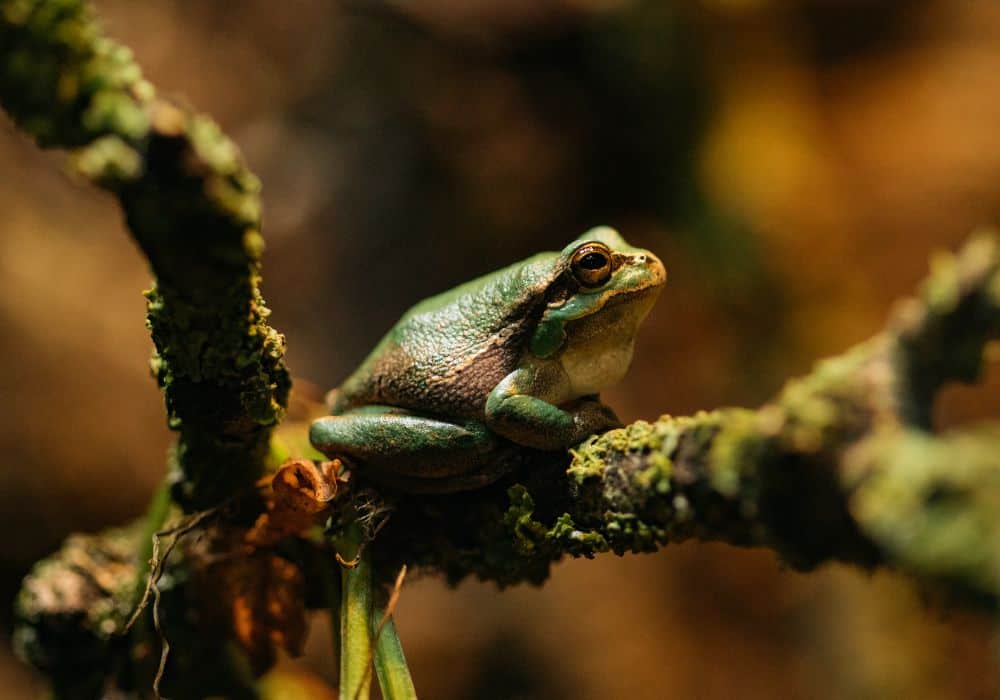 The frog is symbolic in numerous mythologies and folklores. In the Olmec tribe’s folklore, there is a frog God that’s made of stone, and to rejuvenate it eats its own skin; this is supposed to be representative of rebirth.

And in Chinese folklore, it is commonly said that frogs are magical and always looking for an opportunity to play tricks.

In Shakespeare, the frog is made even more magical, as they often have jewels embedded in their heads, and these give them magic powers.

Frogs were also depicted as deities by the Aztecs, and of course, there’s that age-old myth that says if you kiss a frog it will turn into a prince or a princess. And in India, it’s thought that if you sit on a frog, you will cause an earthquake.

What Does the Frog Spirit Animal Represent?

Individuals who have the frog as a spirit animal do well with transitioning. They also can control their emotions better because they’re patient. As a spirit, the frog is a powerful animal, and it’s a first-rate spirit guide, in large part because it doesn’t act in haste.

It’s also viewed as the spirit of cleansing, so if cleansing is what you need in life, embrace the power of the frog spirit. If wealth and prosperity are what you’re after, you can call on the spirit of the money frog.

If you’re inclined to underestimate the power a spirit can wield, consider why so many Native Americans had the frog on their totems. These amphibians would bring good luck and prosperity to a tribe, and it can be said that those tribes which shunned the frog totem usually experienced hardship.

For millennia, human beings have been living in harmony with frogs. That being said, frogs have devastated human cultures on numerous occasions, but by and large, frogs do more good than they cause harm.

While they may or may not be a source of magic, what is true is that frog clans aren’t going anywhere, and as long as they’re around, human beings will continue to see them as symbolic.