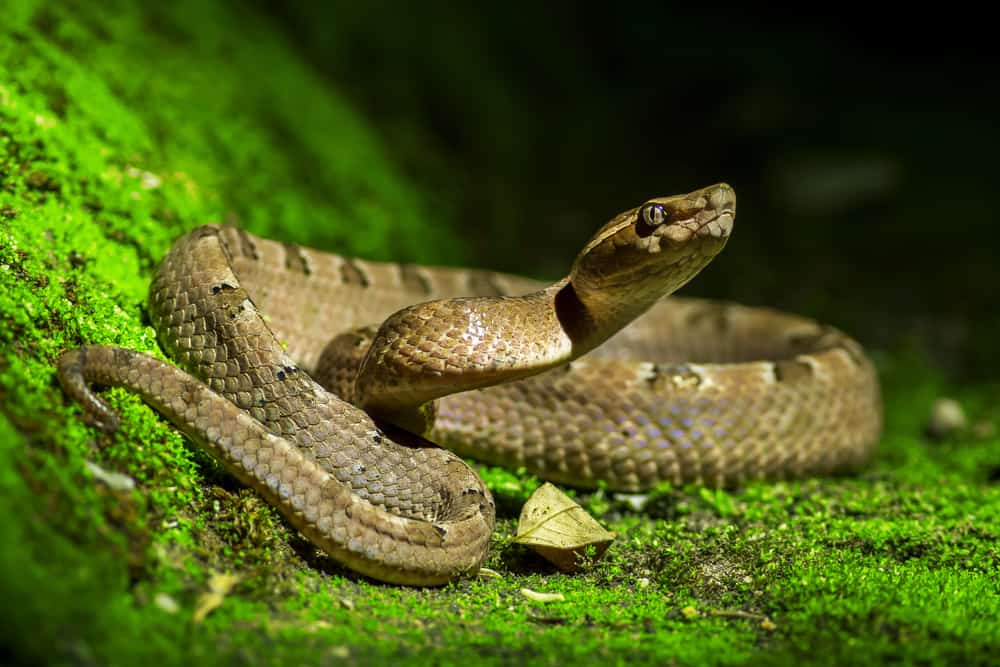 Snakes are fascinating and highly specialized predators that dominate a lot of the biomes they live in. Yet, even they often have predators that stand above them in the food chain. If you’re curious about what animals eat snakes and have the skills and attributes necessary to take these cold-blooded hunters down, here is a quick list of the 17 major snake predators found around the world.

Naturally, not all snakes are created equal in the first place. When looking at animals that can hunt and kill snakes, there is a world of difference between the giant anacondas, venomous snakes such as the king cobra, and simple adder snakes with neither size nor venom at their advantage.

Such differences as well as the various habitats snakes can live in, largely dictate what their predators are. Snakes are present on all continents except Antarctica so you can find them in Africa, Europe, Australia, both the Americas, as well as Asia, specifically India and Southeast Asia.

So, the highly venomous Australian Coastal Taipan, for example, is at risk from hungry Australian saltwater crocodiles whereas an anaconda in the South American rainforest pretty much doesn’t have a natural predator as it is much larger than the caiman alligators in the Amazon.

Aside from size and habitat, the other main difference between the over 3,000 species of snakes on the planet is whether they venomous or constrictor snakes.

Venomous snake species such as cobras, rattlesnakes, kingsnakes, and others, use their venomous bite to either paralyze or outright kill their prey. As such, they usually rely on ambush tactics and speed to hunt but aren’t all that physically strong and massive in size.

Constrictor snakes such as pythons and anacondas, on the other hand, don’t have venom and instead hunt by utilizing their muscular bodies to rope themselves around a creature and strangle it to death. This doesn’t mean that they don’t use their jaws and teeth, however, as the powerful bite of a large constrictor snake can still cause a lot of pain and damage to a would-be predator or help the snake to more easily grapple its prey.

These vastly different hunting tactics as well as the snake’s habitat determine their own prey of choice too. Some snake species will go for large animals while others would focus on small mammals or amphibians such as frogs, mice, rats, and other rodents or even just bird eggs and insects. Virtually every living thing that’s small enough to fit in this reptile’s jaws can be a suitable delicacy for it.

A lot of people are intuitively afraid or repulsed by snakes but snake meat is actually quite edible and nutritious for most carnivore and omnivore animals, including humans. So, a truly full and extensive list of all the possible snake predators would include countless thousands of animals including us and even your pet Scottish terrier as it too can catch, kill, and eat a non-venomous adder snake.

In fact, even large numbers of swarm insects such as fire ants can sometimes attack and kill a small snake if they choose to. So, we won’t really delve into the many possible and more obscure examples. Instead, let’s just go over the 17 most common predators of snakes to see who are the animals that actively and consistently prey on these reptiles.

Right at the top of the list of common snake predators are actually snakes themselves. This isn’t just a matter of larger snake species preying on the smaller ones either, although that happens too. What’s more, snakes of the same species often cannibalize each other too. They often do this while growing together in their large nests but they do it when they are adults too.

Cobras are especially notorious for doing this and the practice is so prevalent in other snake species that it even raises some evolutionary questions too. If you’ve ever owned a pet snake or researched about it, however, this won’t be a surprise for you as one of the first thing experts tell you is to be careful when trying to house two snakes in the same tank.

When speaking of snake venom immunity, one animal is always at the top of people’s minds – the mongoose. Now, it is worth mentioning that there are 33 different species of mongoose and they are not all equally good at hunting and killing snakes. However, even meerkats have enough snake venom resistance to easily take down many snake species.

The reason why mongooses are so good at killing snakes is threefold:

Add the fact that mongooses are typically omnivores and they have not just the means but the motivation to hunt down and eat snakes.

Given that there is a whole class of eagles called “snake eagles”, it should come as no surprise that these birds of prey are also one of the biggest snake predators. Pretty much all eagle species are perfectly capable of utilizing their flight, excellent eyesight, fast diving speeds, and extremely sharp talons to stalk and hunt snakes with ease. Virtually every snake that’s small enough for an eagle to easily kill with one hit of its claws is fair game for these birds.

Eagles are far from the only birds of prey that stalk snakes. In fact, they arguably aren’t even the best-specialized raptor bird snake-hunter out there. The long-legged secretary bird is an excellent snake killer that doesn’t shy away from even the most venomous snakes in Africa such as puff adders and cobras.

The secretary bird doesn’t hunt from the sky but instead walks on the ground and utilized its long and powerful legs to literally stomp snakes to death – the move resembles a secretary furiously tapping on a keyboard, hence the name.

An honorable mention goes to herons who also make good use of their long legs when hunting but a heron will typically deliver the kill shot with its beak, not its legs.

Like mongooses, badgers are expert snake killers that don’t hesitate to step up to even the most venomous reptiles in their habitats. Whether we are talking about the European badger, the African honey badger, or the North American wolverine, badgers have incredibly thick skins, lots of mobility and agility, as well as venom resistance. Badgers are effectively extra-large mongooses overdosed with adrenaline which is why they are also known for stepping up to lions and bears when they need to.

Like eagles, owls are sneaky snake assassins, only they do their hunting at night. Owls are typically smaller than eagles so they avoid some of the larger venomous snake species but they will go for every slithering reptile they can safely get their talons on. Barred owls, Burrowing owls, the Eastern Screech owl, and the Great Horned owl are especially well-known as expert snake hunters.

The last bird of prey on our list, hawks share most of the same characteristics as eagles, they are just a bit smaller on average. Like eagles, most hawks tend to hunt snakes by dive-bombing them and killing them with their sharp talons before the reptile even realized what has happened. Red-tailed hawks, for example, are well-known for preying on rattlesnakes and they are also ingenious enough to employ other hunting strategies such as distracting or even intimidating the snake to get a better opportunity for a talon or beak attack.

On to a bit of an exception – here’s the lone herbivore on our list – the deer. Deers don’t actually eat snakes as they are strict herbivores. However, we included them anyway because they are notorious snake killers, effectively making them “a snake predator”.

Deers kill snakes presumably because they don’t want them near their fawns. So, it’s a well-observed behavior that whenever a deer sees a snake, it will stomp it to death immediately, often in quite a zealous and gruesome manner.

We don’t think of cats as snake hunters but wild bobcats are very opportunistic hunters that can and will go after anything they can get their claws on. This makes bobcats not only great predators for small non-venomous snakes but even capable rattlesnake killers. The combination of size, strength, and speed of the bobcat is just too much for a rattlesnake. So, even though the feline isn’t resistant to the snake’s venom like a wolverine or a mongoose, the bobcat is still a common snake predator.

Like badgers and mongooses, hedgehogs have a very strong immunity to snake venom. They are also covered with quills which further complicates the snake’s job of landing a good bite. And, as omnivores, hedgehogs are more than happy to complement their diet of fruits and nuts with some snake meat. That’s why hedgehogs are often used by people when entire urban or suburban areas need to be cleaned of snakes in a quick and efficient way.

Weasels are immune to snake venom the way some of the other mammals on this list are. They also aren’t that big or strong. However, as opportunistic and agile omnivores, they do often snack on small snakes they can find, especially when they manage to get to the snake’s nest, eggs, and newly hatched babies.

Many people assume that raccoons are immune to snake venom the way badgers are. That’s not the case, however, even if raccoons look like they are related to badgers. Nevertheless, like bobcats and foxes, raccoons are more than smart, fast, and agile enough to kill most snakes they encounter and then eat them too.

Essentially big prairie foxes, coyotes kill and eat snakes any chance they get. Coyotes have long and slender legs that allow them to stay at a distance from their prey’s nasty bite and their long muzzles are great for a quick and decisive strike at the snake’s head or neck. Granted, coyotes are also not immune to snake venom but they are more than fast and opportunistic enough to hunt even venomous snakes and succeed more often than fail.

15. Tigers and other big cats

Bobcats are far from the only feline snake hunters. Virtually every big cat that’s hungry enough will readily jump at a nearby snake. Tigers are an especially common example of that as they have many close encounters with snakes in the rainforests of India.

Native to the north-eastern coastline of Australia, saltwater crocodiles readily attack any land or water snake they can find. These reptiles are huge, powerful, and have thick hides, all of which leaves no chance to their snake prey.

Snakes have the reputation of being cold-blooded killers. And they deserve it too as they are near-apex predators in almost every continent and place they live in. However, very few snakes are actually at the top of the food chain in their respective habitats.

There are exceptions such as anacondas and most other constrictor snakes but the majority of venomous snakes and smaller adders do feature in other animals’ menus too. Virtually every other predator that has immunity or resistance to a snake’s venom or that is either big or fast enough to ignore it, can prey on a non-constrictor snake.