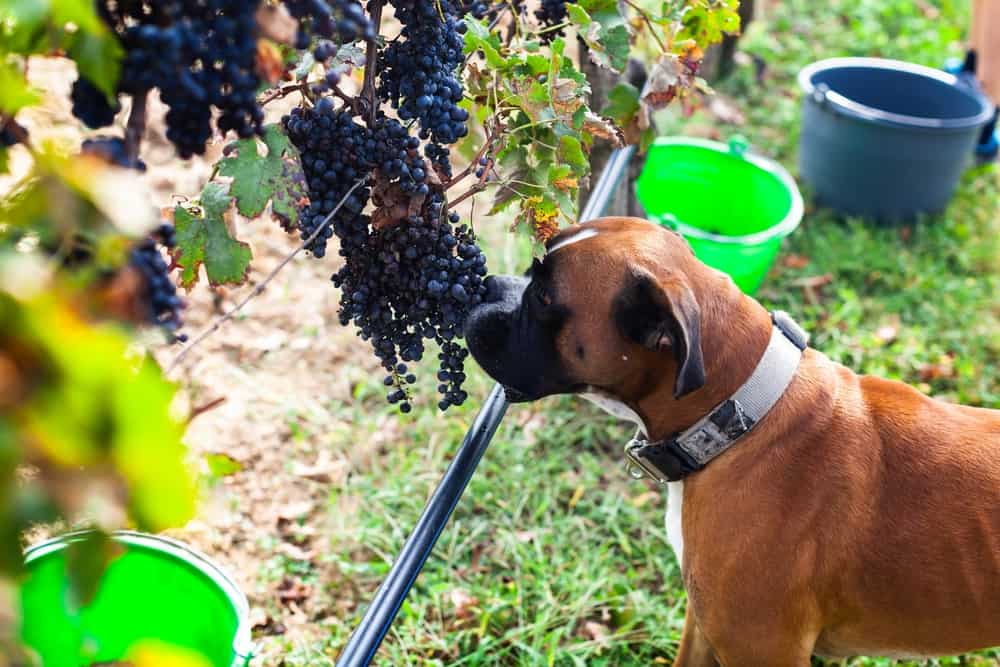 You may have clicked on this article because of two reasons, either you have a dog and they’ve just eaten or recently eaten some grapes, or you are interested in dogs and want to know more about them and what they can and cannot eat.

Whatever the reason, this should provide the answers that you are looking for. I will be explaining how toxic grapes can be for dogs, symptoms of grape poisoning in dogs, answering some frequently asked questions, and giving a list of fruits that are safe.

Why are Grapes Toxic to Dogs?

According to the American Kennel Club, grapes are highly toxic to dogs because they can cause acute kidney failure that comes on quickly and can kill them if the toxicity is high enough.

The ingredient within the grapes that causes such a severe reaction has not yet been officially identified, but there is a high amount of research on the subject as well as much speculation.

There was a study carried out by three top veterinarians from the ASPCA Animal Poison Control Center that looked at the effect of grapes and their juice on dogs and the results were published in May 2021.

The vets believe the toxin in the fruit is tartaric acid, otherwise known as mycotoxin. This is a substance produced by both mold and fungus and can make even humans ill if ingested in large quantities.

This would make sense, as grapes all contain varying levels of tartaric acid, which may explain why some dogs have mild symptoms and others have extreme reactions resulting in renal failure and death.

However, this result has only been published on a few sites, and the report doesn’t appear to be widely known about yet, so it is unclear how accurate or trustworthy these findings are.

Rover states that some dogs may be genetically predisposed to have a more severe reaction to a grape than others, but again that isn’t official, and the hypothesis needs further intensive study to back it up before it can be taken seriously.

Can a Single Grape Kill my Dog?

Unfortunately, in some cases, yes. A single grape has the potential to kill your dog, which is why if you even suspect that they’ve gotten hold of one, you should get medical advice from your animal’s care provider immediately.

This should be done even if the dog shows no symptoms initially, as they could come on within a few hours and strike them without much warning. It isn’t just grapes either, as currants, raisins, sultanas, grape jelly, grape juice, and wine all have the same effect.

Symptoms of Grape Poisoning in Dogs

The symptoms of grape poisoning can be varied in both type and severity, and all depend on how much of the toxin the dog has ingested and how long it has been since the fruit was eaten. According to VCA Hospitals, the symptoms can range through the following signs:

Pain isn’t always obvious in dogs, especially if it is abdominal pain, but you may be able to tell if they yelp or whine when touched, seem tender in the area or if they have other symptoms such as a loss of appetite.

This will be the first sign of grape poisoning along with diarrhea and will occur within the first 12 hours. This helps to rid their body of the toxin. If they vomit repeatedly and don’t appear to improve, then you should seek more medical advice.

This symptom can cause other symptoms such as abdominal pain and adds to their dehydrated state. You should watch for diarrhea that lasts for more than a day or happens more than once in an hour.

This is caused both by the vomiting and diarrhea, as well as the kidneys losing their function. Loss of appetite may also contribute as they may not want to drink water.

An easy way to tell if a dog is dehydrated is to see if they have a dry nose and mouth, pale gums, are acting strangely or hiding, and are excessively panting despite being cool and calm.

This happens because the toxin causes the body to try to fight back and get rid of it, using up all the dog’s energy reserves, and can be made worse by not eating or drinking as well as the effects of the acute kidney failure.

This is a sign of the beginning of acute renal failure and is the time when you need to take them to get medical help if they have shown no other outward symptoms.

Leading on from the last point, if they go from excessively urinating to not urinating at all or going not very often, it is a sign of late-stage acute kidney failure and needs treatment immediately, as the prognosis from here is poor.

Loss of appetite can be caused by the diarrhea and vomiting, as well as abdominal pain. Watch out for an unusually full food bowl or changed behaviour around mealtimes.

This occurs as the body attempts to fight off the toxin and as a result of not eating, not drinking enough, and the signs of acute kidney failure. The dog may want to sleep most of the time and struggle moving from one place to another.

Tremors can be a sign of muscle weakness or a symptom of seizures. If your dog is shaking and seems unresponsive or in a coma like state, get help immediately.

This happens on rare occasions, but if you notice your dog breathing with more effort than usual, panting, or wheezing, then they are likely struggling to breathe and need immediate medical attention.

What to do if your Dog Has Eaten Grapes

There is no official cure for grape poisoning, so the only treatments are those that get rid of the toxin as fast as possible, such as causing them to be sick or washing out their bowel via water enema.

If your pet has the symptoms above, call your vet immediately. Most of the time they will ask you to bring them in straightaway for treatment, but sometimes they get you to perform a home-based procedure yourself.

This procedure involves giving the dog a hydrogen peroxide solution that has a ratio of one teaspoon for every five pounds of body weight. It will make the dog vomit and hopefully rid the body of the toxin, if they haven’t already. Don’t do this without speaking to the vet first.

Once you have gotten your dog to the vet, they will quickly assess them and may give them some activated charcoal to make them vomit if they haven’t already, protect their stomach and intestines and stop them from absorbing any more of the toxin.

After that, they may give some fluid therapy via intravenous fluids to rehydrate them and protect their kidneys. Hopefully, if they have gotten medical attention in time, the dog will recover without any lasting damage.

Fruits that are Safe for Dogs to Eat

So, if dogs can’t eat grapes, what fruits can they eat? There are several different kinds that can safely be consumed by our furry friends, so long as any seeds are removed as they can be toxic:

Fruit tends to be high in natural sugars, so it is best to only give your dog a piece or two as a treat every once in a while. Too much can make them overweight and suffer from associated issues such as heart disease and limited mobility.

Dogs can also sometimes be allergic to some fruits, especially the more acidic ones such as pineapple or berries, so you should watch out for any signs of a reaction after consumption.

These signs include itching, swelling, abdominal pain, vomiting, diarrhea, difficulty breathing, and wheezing. If you suspect your dog has had an allergic reaction, call your vet for advice.

Otherwise, feel free to give your pet a slice of apple or a couple of blueberries once a week maximum, and avoid jam as the added sugar isn’t good for them.

To conclude, if your dog has eaten grapes, grape-related products, or shows signs of grape poisoning you should:

Hopefully, you have found this article to be helpful and informative. If you have any questions or comments, please leave them below and we will get back to you as soon as possible.