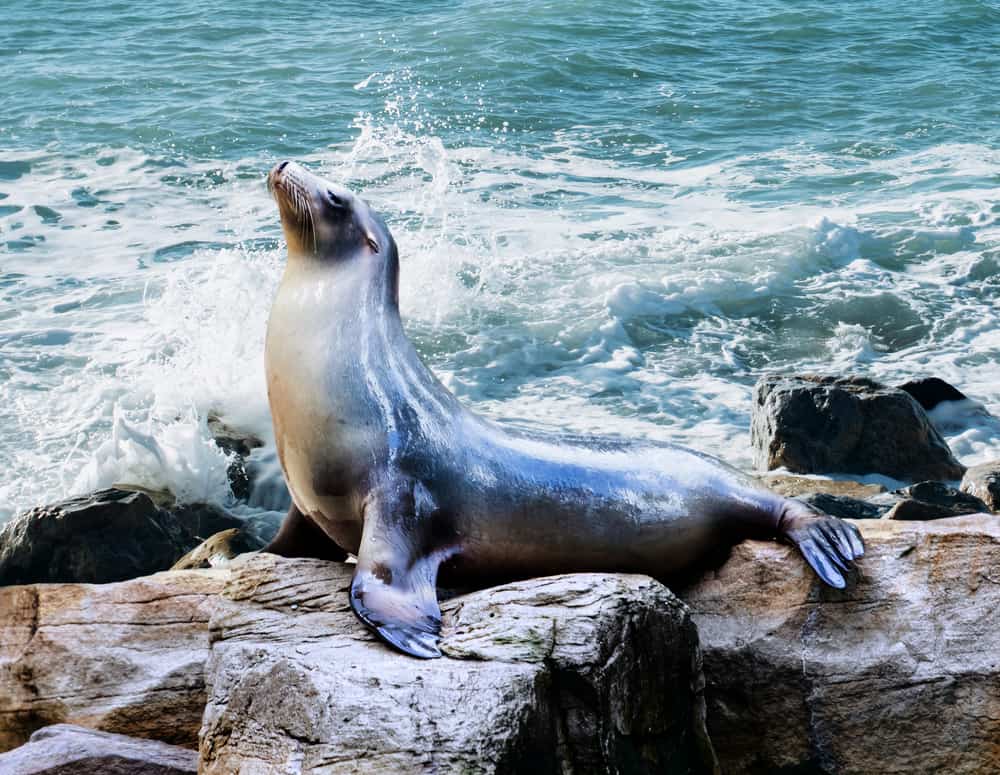 Pinnipeds are a superfamily of carnivore mammals adapted to marine aquatic life. In this superfamily, the mighty walrus stand out and the cute seals can be mistaken for sea lions.

This last one, although with some similarities with the seal, is not considered one due to many factors that you will get to know right now. Besides other interesting details like their food preferences, hunting style, and others.

The Physical Characteristics of Sea Lions

Like all marine mammals, sea lions have a thick layer of fat that protects them against the cold ocean. Male sea lions can weigh up to 440 to 2200 pounds. In the case of adult females, these are smaller, weighing up to 110 to 600 pounds.

In terms of length, adult males can size up to 6.5 to 11 feet and females from 4 to 9 feet; but this depends on the species, with the northern sea lion being the largest male, which is three times the size of the female.

They have an appearance characterized by external ear flaps, long fins, and a huge chest and belly. This is accompanied by a short, thick fur that covers the thick layer of fat.

The Nature of Sea Lions

Sea lions are known for having a streamlined body, whose fins play a key role. The front flippers are used for powerful swimming and the hind flippers can be rotated under the body for efficient walking on land.

Similarly, the sea lions are boisterous and noisy types of animal that have particular highly sensitive whiskers called vibrissae; these have the capacity of detecting vibrations under the water that helps sea lions on detecting their prey.

In matters of sexuality, sexually developed sea lions are much bigger than females and have a sagittal crest or protuberance on the head. When their reach sexual maturity, sea lions spend long hours searching for food before returning to the shore, when they reach the colonies, they search for a mate and reproduce in large groups, where the males fight and establish their territory.

The Distribution Area, habitat, and Life Span of Sea Lions

There are six kinds of sea lions:

The sea lions of California are one of the most known species, which can be found from southern Alaska to Baja California. This species is the most populated one, but the New Zealand ones are in danger of extinction.

In the same manner,  its aquatic habitat is conditioned according to the species of sea lion. Some have to establish their colonies on sandy shores, rocky outcrops, and buoys. Their life expectancy is relatively long, ranging from 20 to 30 years in captivity and 15 to 25 years in the wild.

What Do Sea Lions Eat?

Sea lions are carnivores, which is why their main diet is based on meat, but these can also consume some water plants and algae. Now, according to its state, their diet can be:

Sea lions in captivity receive a diet similar to what they might have in the wild. If this does not occur, they would present problems in their growth, and fertility, and they even can have diseases. In their captivity, they have a diet based on fish, where the presence of capelin, mackerel, herring, and pompano stands out.

This fish-based diet is supplemented by squid, which is almost always given sporadically as rewards when the sea lions perform tricks. It is worth mentioning that, although most captive animals tend to have a shorter life expectancy, this is not the case for sea lions, which can live 25 to 30 years in captivity.

As sea lions are carnivorous, piscivorous mammals, their diet is full of fish and cephalopods. All of these are hunted in the sea, the hunting of which varies according to the species and place of habitation.

Nevertheless, there are certain preferred fishes by the sic species like the case herring, salmon, hake, sardines, anchovies, and opaleye fish. In the case of cephalopods, the most common presentation in their diet is squid and octopus. Now, the following is a more detailed description of what they eat, according to the species:

Baby sea lions are fed with dense, nutrient-laden milk that develops in the mammary glands during the mother’s lactation period. This is so, for a few days, until the mother begins to leave them alone for some period of time in search of food.

The breastfeeding period for baby sea lions can extend from 6 to 12 months, but after two months, you start supplementing their diet with some fish. Even when the baby sea lion is significantly big enough, it is able to accompany its mother in the hunting process.

How Much Do Sea Lions Eat?

As with their diet, weight, and size, the amount of food sea lions can ingest varies by species. According to SEA World, sea lions consume between 5% to 8% of their body weight per day, this means that the estimated amount of food they ingest can range from 9 to 200 pounds, depending on the species.

These high amounts of food are due to the need to maintain its thick layer of fat, which allows it to keep warm in the cold waters of the ocean.  Without it, the sea lions would not be able to hunt, so they would starve to death.

How Do Sea Lions Hunt?

Sea lions prefer to hunt close to the coasts in not-so-deep waters, but is necessary for survival, they will move offshore and travel great distances to find food. To catch their prey, they generally use strangulation, covering their mouths and noses.

This attack is short but effective, as they have a powerful jaw. However, when it comes to smaller prey, they only use their powerful fins to deliver the final blow. It is worth mentioning that sea lions also have sharp claws and teeth that allow them to tear their prey.

Sea lions are one of the most impressive aquatic mammals. Not only because of their large size, they have great dexterity and speed in the water, not to mention that they can perform very well on land. Their intelligence and colorful appearance have led them to be infallible animals in aquariums, being one of the animals preferred by the public.

Would a Sea Lion Eat a Human Being?

So far, there has never been a recorded fact suggesting that sea lions can eat humans. However, sea lions can be very dangerous for us, as there have been several cases where sea lions have inflicted harm to humans.

It must be clear that this is not a domestic animal, but a wild animal. And when they have panic and stress attacks, they may even attack us, humans. So, for your safety and his, it’s best to stay 50 feet away from a sea lion.

Yes, sea lions are specialized aquatic predators of opportunity. Therefore, they eat not only just fish but all those animals they can find in their hunting area, including penguins.

Yes, these hunters of opportunity enjoy a myriad of fish, including cod. This particular fish is an important part of the Steller sea lion’s diet.