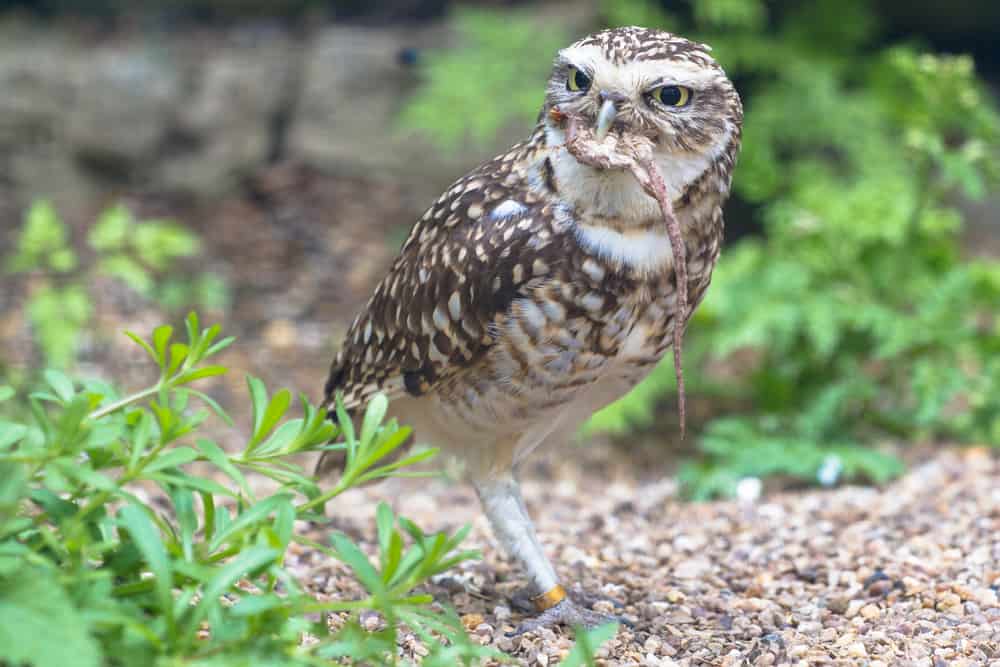 You can find owls worldwide. These nocturn birds hunt, kill, and eat other animals, particularly rodents, but some enjoy meals that include birds and fish.

Basically, their diet will vary depending on their size and habitat. Since there are almost 250 owl species, you can suppose that their daily menu types can be broad. So, let’s see what do owls eat. 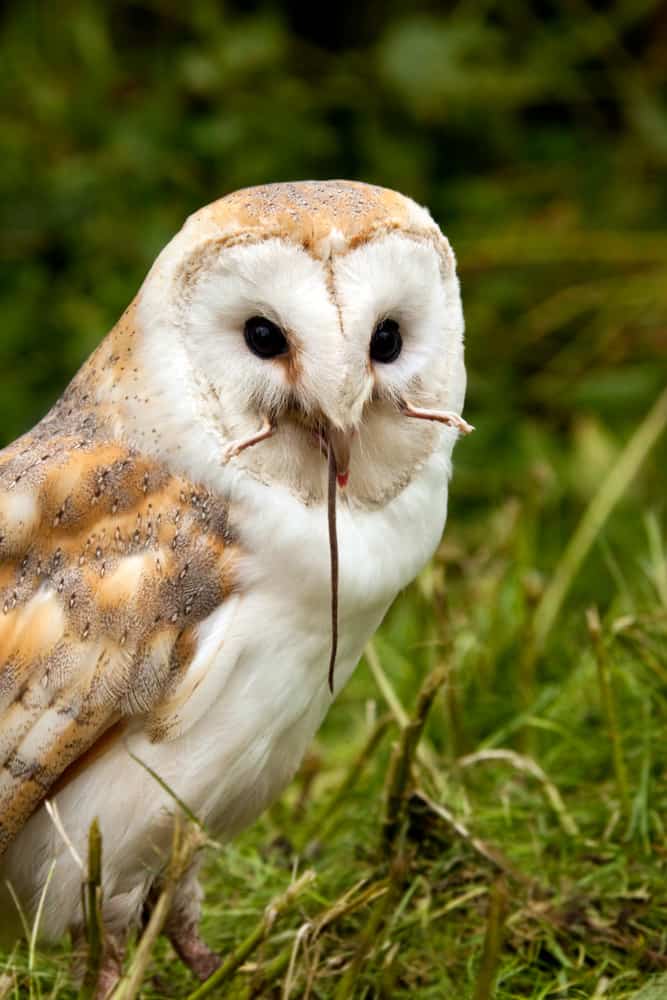 The owl’s lifespan will depend on its species and lifestyle. Most owls in captivity live longer than those spending life in the wild. While free owls live approximately 9 to 10 years, those living protected next to their humans can reach more than 20 years.

On the other hand, they can live twice as long in captivity. For instance, one female owl lived 50 years at the San Francisco ZOO, but it is not a typical case.

Interestingly, owls are an essential part of the food chain, both as prey and predators. These birds help to prevent rodents and pests’ overpopulation in the ecosystem by killing and consuming them.

On the other hand, many owls are an excellent source of nutrition for animals that feed on them. Even though owls are predators, they can be tasty food for some bigger animals, like:

Most owls are nocturnal animals and hunt and eat during the night. Only a few species are diurnal, meaning they hunt throughout the day. An average owl will require approximately 3 to 4 ounces (85 – 113 g) of food a day, but that amount will significantly vary depending on its body size.

For instance, small owls eat more frequently because their metabolism is faster compared to larger species. However, that means they will need a lower amount of food. In nature, owls use a few different techniques while hunting, including:

Strategic flight – In such a case, an owl will make a quartering flight to identify the prey. Then, it fast flies towards the moving animal and catches it suddenly.

Hunting from perching – This strategy includes perching on a low branch while prey appears. Once the owl spots the target, it will fly down and catch the victim with outstretched claws.

Fishing – Owls that eat fish will fly over water until spotting prey. Then, they will grab them without hesitation.

As you have probably known, birds of prey are a crucial part of the ecosystem since they control the small mammals, rodents, reptiles, and bird populations. They typically catch an alive animal, kill it, and then eat it. It is not common for those birds to consume any dirt, sand, or scraps during a meal.

Unfortunately, they are prone to ingest microfibers and microplastic fragments, tiny bits of plastic debris. It is estimated that one owl can intake hundreds of pieces of polyester, nylon, and polypropylene a day.

One study shows that 86% of all the plastics that owls and other birds of prey ingest are microfibers from synthetic clothing and ropes. They usually come to nature from clothes-washing machines.

Owls are birds of prey and strict carnivorous and need meat to survive. Although it doesn’t look like that, their diet is varied, and they can adapt to any food available in the area. The actual menu will mostly depend on the owl’s size.

The smallest owls – These birds eat beetles, scorpions, centipedes, moths, and crickets, but some can hunt birds of their size.

Even though birds are not a regular part of the owl’s typical diet, large owls can eat game birds and even other owls. However, they will typically enjoy in many other species, including:

Still, no one can generalize a standard owl’s menu since they are not picky and consume almost everything they can catch in the environment where they spend time. However, there is a list of the favorite food for various owl types:

This owl prefers mammals, and its diet contains at least 90% of these animals:

The remaining 10% includes birds, reptiles, amphibians, and insects they find around. 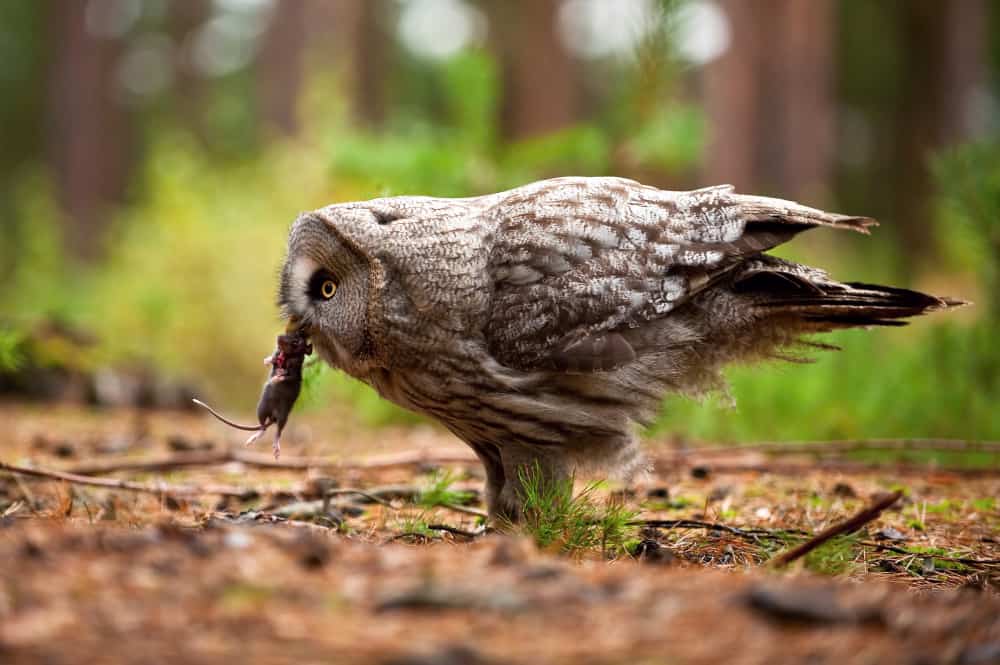 When you want to feed an owl, you should never offer it:

Pigeons – These birds are a source of numerous avian diseases they can transmit to your owl.

Rabbits – You can offer this prey to the owl only after cutting it. Otherwise, long sharp bone fragments can harm smaller owls.

Shot animals – Be aware that only one lead pellet can cause owl poisoning and kill it.

Frozen food – Never offer the owl the food frozen for over three months or the one you re-freeze and defrosted a few times.

Plants – Owls are carnivores and won’t eat veggies, fruits, or other plants under any circumstances.

Dogs – In most cases, owls won’t eat dogs, but you should be aware that the Great Horned owl sometimes hunts and eats black-tailed prairie dogs. However, they are actually not dogs but rodents.

Carcasses – Owls are not scavengers and usually avoid eating decaying animal carcasses. However, large ones, like the Snowy owl, Great Horned owl, and Eurasian Eagle-owl, can eat dead hoofed mammals, reptiles, and birds, particularly in winter. Interestingly, they can nibble some carcasses they find around but won’t return later for more.

The best thing is that owls effortlessly adjust their diet to the environment and eat the available food. They hit and catch the prey with their feet and kill it by breaking its neck. After a meal, they often store surplus food in holes or tree forks.

As you have probably known, owls don’t have teeth, so they can’t chew food. Instead, they swallow the whole small prey or use their sharp, hooked bills to tear the larger preys’ flesh into pieces and crush their bones.

Even though most owls hunt at night, not all of them are nocturnal feeders. You can sometimes see diurnal owls that are active during the day. Finally, there are also crepuscular owls that hunt in the dawn or twilight.

Owls can hunt and eat prey of their size and sometimes animals larger than their own body size.

After swallowing the whole prey, its stomach digests meat, while the undigested parts form pellets (small balls) go to the gizzard, a separate stomach part.

Owls rarely drink water like other birds do since the water from their prey’s bodies is enough for their needs. On average, they get 0.002 pounds (1 g) of water for each gram of intake fat. In most cases, they use water only for bathing.

Most owls are nocturnal birds that hunt at night. Their diet includes insects, small mammals, reptiles, rodents, birds, and amphibians, mainly depending on their size and habitat. These birds are hunters, so they usually won’t eat carcasses, plus they don’t prefer consuming plants, veggies, and fruit.