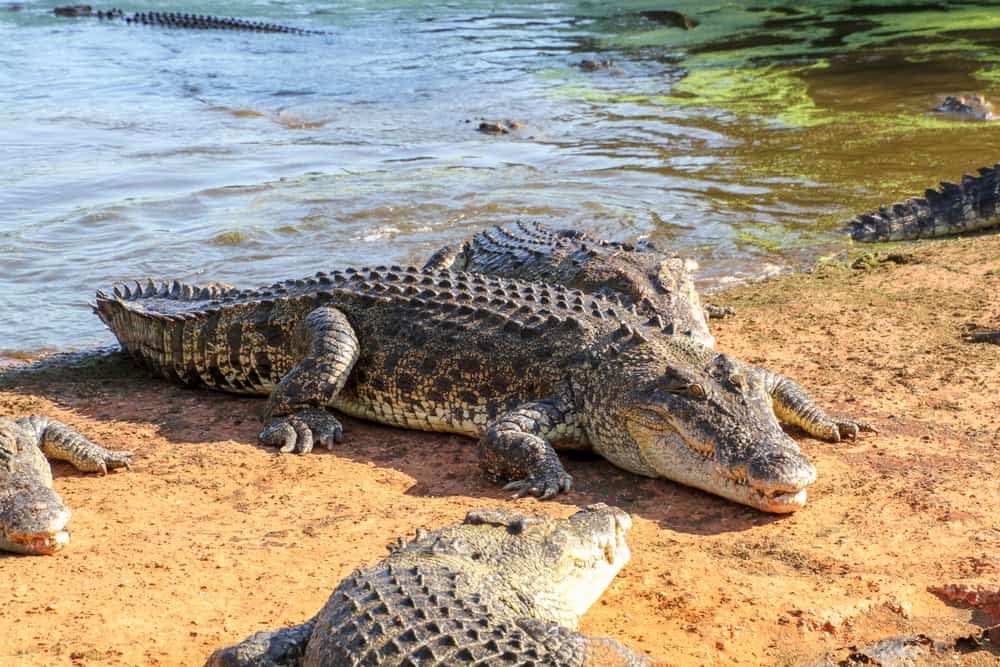 We’ve all seen crocodiles on TV, at the zoo, or while vacationing in Florida. With powerful jaws and a prehistoric-like figure, you may wonder what crocodiles eat.

All crocodiles eat small mammals and fish. Certain species will also eat larger mammals, such as antelope or deer, crustaceans, frogs, snakes, turtles, and even other crocodiles.

This article will teach you all you need to know about crocodiles, their lifestyle, and their diet.

1. The Physical Characteristics of Crocodiles 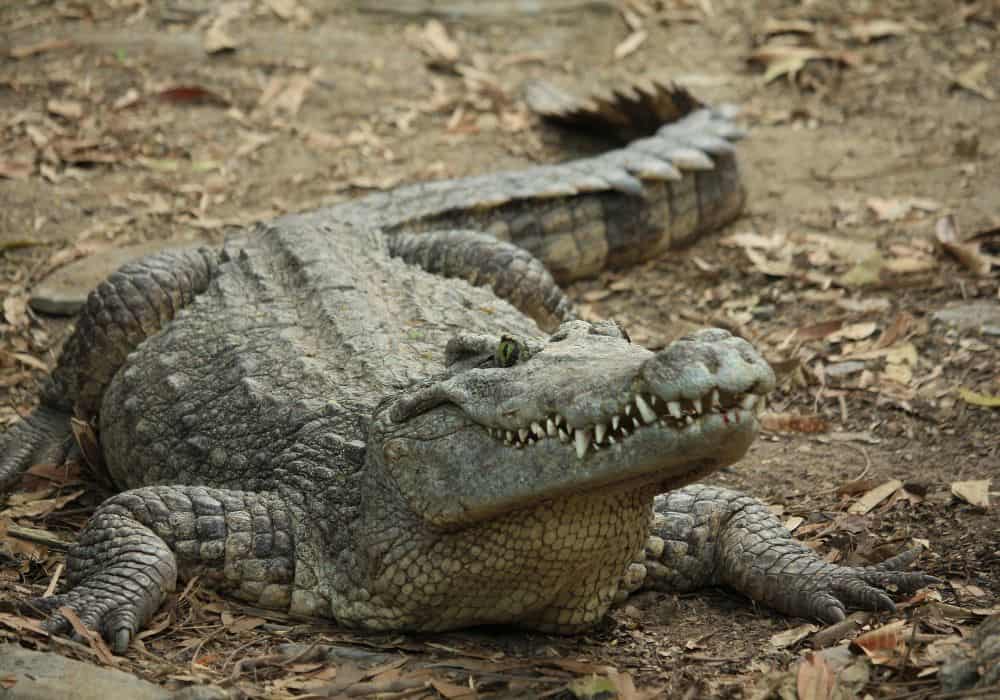 Crocodiles are the largest reptiles on earth. The crocodile family includes 23 species of lizard-like creatures known for hiding in swampy waters and tearing apart prey.

To do this, the crocodile has large, powerful jaws that home between 60 and 110 pointed teeth. They will lose most of these and replace them during their lifetime – as many as a few thousand of them! These teeth are hidden in a long mouth, called a snout, which ends in two nostrils that point upward.

The crocodile’s body shape allows its eyes and nose to stay above the water’s surface as the rest of its body hides underneath. Many people confuse alligators with crocodiles, since they come from the same biological order, but crocodiles are much larger and more aggressive than their gator cousins.

The smallest species of crocodile gets to be about 6 feet in length, while the largest can reach up to 20 feet in length and weigh over 2,000 pounds. Crocodile bodies are covered in thick, hard scales and bony plates.

Crocodiles are known for their aggression, especially as they hunt; however, most of the time they can be found sitting quietly in still waters, calm until provoked.

They spend most of their time in the water, although they will lay their eggs and bask on land. Basking is like sunbathing, but it forms part of their thermoregulation as crocodiles try to maintain an 86℉ to 90℉ body temperature.

Primarily nocturnal, they can swim and walk many kilometers looking for food. Many crocodiles will also eat stone and rocks, but these are to aid in digestion, not for nutrition. An adult croc’s stomach can hold between 10 and 15 pounds of rocks at any time.

Most crocodiles share food and basking areas, although saltwater crocks are more territorial than their own, especially when it comes to rival males. Female crocodiles will intensely defend their nests and young.

Crocodiles can be found on five of the seven continents, but their habitats vary greatly.

Crocs are semi-aquatic, spending the most time in the water but rarely straying far from the coast. You can find crocs in North and South America, Asia, Australia, and Africa.

American crocs are mostly found in South Florida, Jamaica, the Caribbean coast, and the Pacific coast.

Saltwater crocs are most abundant in Northern Australia all the way to Southeast Asia and India.

Nile crocodiles heed to their name and are found in the Nile Basin, sub-Saharan Africa, and Madagascar.

Crocodiles live near lakes, wetlands, rivers, mangrove swamps, estuaries, and in brackish water. Since they are reptiles, they prefer tropical climates which help them generate heat.

Female crocs will create one nest per year. Sometimes they may build multiple nests next to one another to disperse their eggs. Females lay 30-60 eggs that are incubated for about three months.

When the eggs hatch, the mother can carry them to the water in her mouth or they may enter the water on their own. Hatchlings have a low survival rate, as they’re often eaten by other predators.

Surviving hatchlings will stay with the mother until they are a couple of years old and ready to go out on their own. Crocodiles will take between 4 and 15 years to fully mature.

They can live up to 70 years in the wild, depending on their species, and up to 100 years in captivity. An interesting fact about crocodiles is that they do not die of aging. Instead, all crocs will continue to grow their whole life until they die from starvation, accidents, or disease.

4. What Do Crocodiles Eat? 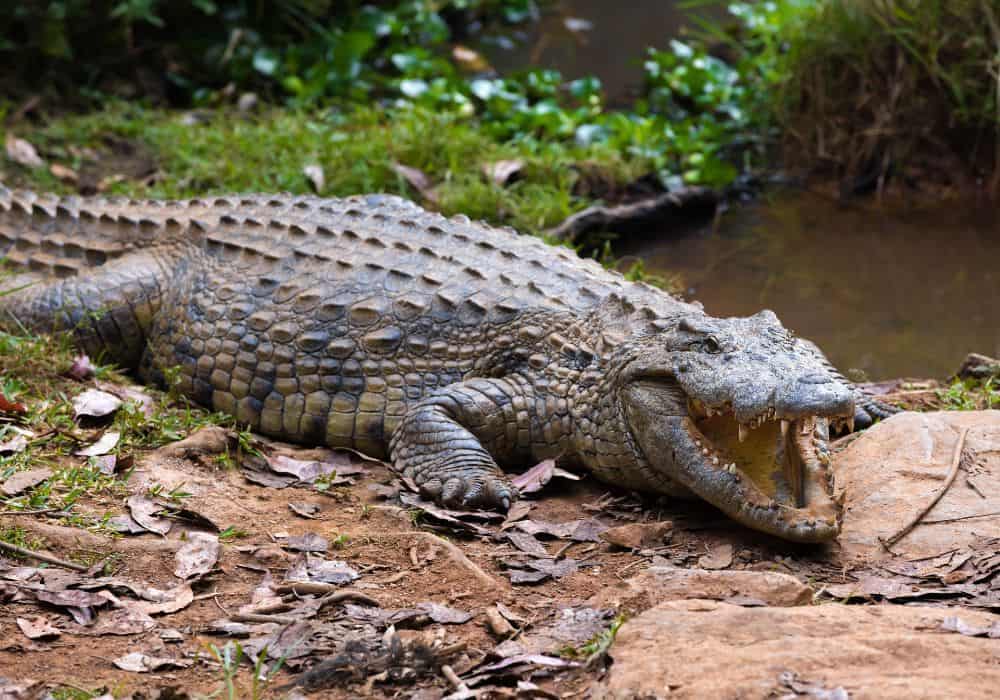 Crocodiles are known as aggressive carnivores, so you’ll find them snapping down on a wide array of living – or recently killed – creatures. Not all crocodile species have access to the same foods, however, especially those in captivity. Let’s break down what wild, captive, and baby crocodiles eat.

Wild crocodiles can live in both saltwater and freshwater near five different continents, giving them a large variety of meal choices. All wild crocodiles eat small mammals, but some also eat birds, fish, reptiles, crustaceans, and frogs.

The larger the crocodile species, the larger its prey. Saltwater crocodiles – some of the largest crocs on earth – have been known to eat wildebeest that can weigh over 500 pounds.

Some of the most common mammals that fall prey to crocodiles include deer, gazelles, wild boars, otters, and certain monkeys. They tend to prefer to eat Bovidae, which includes cloven-hoofed animals like antelopes, buffalo, cattle, bison, and goat-antelopes.

Again, this greatly depends on where the crocodile lives. Even larger crocodiles will snack on smaller animals like mongooses, rodents, wallabies, and hares to ensure they have enough sustenance when large prey isn’t around.

Captive crocodiles will also have a meat-based diet. Crocs in zoos and aquariums will be fed the carcasses of rats, mice, and fish, as well as raw chicken and beef. Crocodiles should eat more than just beef or chicken to best imitate their natural diet, and the food should be cut into a reasonable size for captive crocs.

Uneaten food should be removed from a crocodile’s enclosure within 24 hours to avoid it decomposing and becoming a health threat to the animal.

Baby crocodiles will start a meat-focused diet from birth. First, they’ll eat smaller prey like insects, frogs, shrimp, and fish. Slowly, they’ll begin to incorporate small mice and crawfish, if found in their habitat. Once they get big enough, their prey will grow along with their appetite.

In captivity, baby crocs may also benefit from eating vitamin supplements mixed with their meal, especially if they aren’t receiving whole prey.

5. What Do Different Types of Crocodiles Eat? 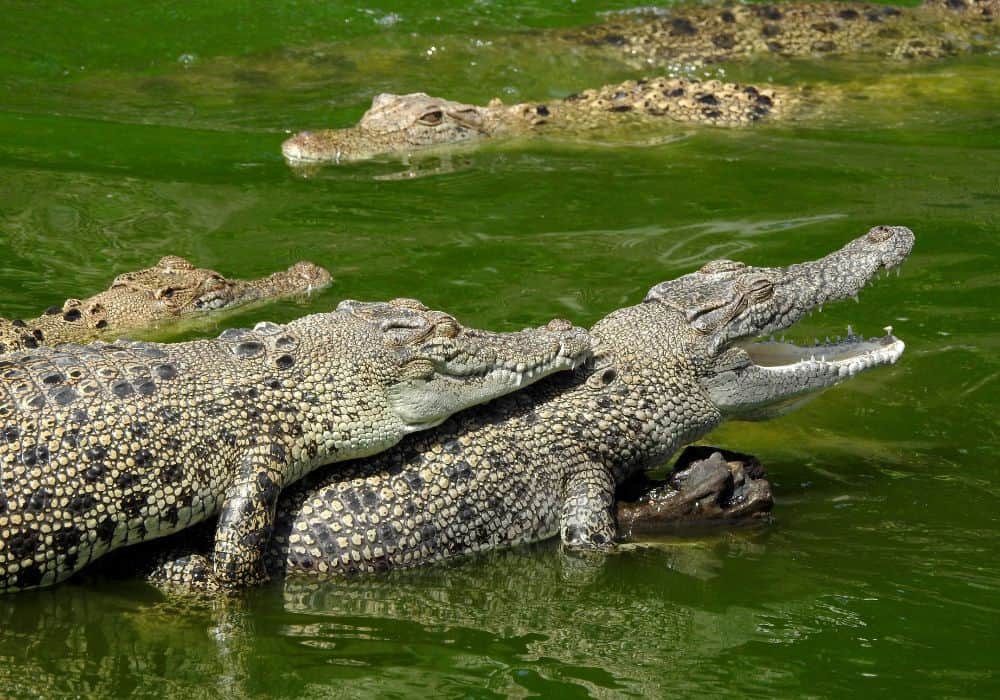 6. How Much Do Crocodiles Eat?

Young crocodiles should eat 5% of their body weight 1-3 times per week.

Adult crocs, on the other hand, need to eat an average of 2 to 5 pounds of meat daily, which also equals roughly 5% of their body weight per week.

A wild croc will rarely get the chance to eat every day, as most meals come as rare opportunities. Instead, they may have a large meal that will hold them over for a few days before they find their next prey. Adult crocs may eat 50 large meals per year to hold them over.

Crocodiles will stay near the water’s edge, barely moving until an unknowing prey comes along for a drink. Some species of crocodiles also hunt in groups, especially for larger prey.

As it attacks, the crocodile will leap out of the water and snap down on its prey with a sideways movement. For larger prey, it will try to drown it by dragging it underwater or rolling over multiple times while in the water. Smaller prey will be easily crushed in its jaws.

Unlike other animals, crocodiles do not have molars to chew their meal. This means they cannot break it into small pieces, forcing them to eat the prey whole.

Crocodiles are one of the world’s top predators and for good reason. Their voracious appetite leads them to eat almost anything that crosses their path.

While most prefer to devour fish, they can also eat unsuspecting mammals such as deer, antelope, badgers, rodents, otters, and more. They also have an interest in other marine snacks such as crustaceans, turtles, snakes, and frogs.

Laying sneakily under the surface as they wait for their next meal, be sure to steer clear of the area if you notice any crocodile eyes peeking at you from above the water!