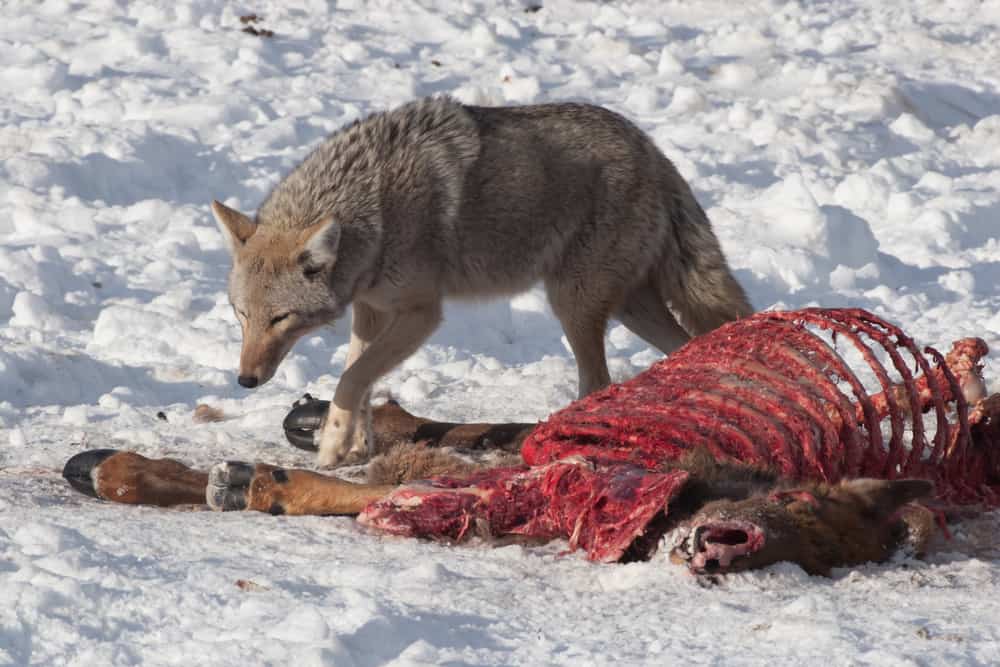 Coyotes are opportunistic feeders and will shift their diet frequently to take advantage of what is available in their current habitat. They will mostly, however, feed on small prey, but can occasionally shift to large prey as well. Keep reading to learn more about coyotes’ diet, general behavior, and way of life.

Also known as Canis latrans, the coyote is a member of the dog family commonly referred to as the Canidae. It is medium-sized and shares numerous traits with other members of the family including foxes, wolves, jackals, dingoes, and domestic dogs.

Cayotes are characterized by narrow snouts, yellow eyes, thick fur, bushy tails, and lean bodies. They mostly thrive in North America and despite the rocky relationship they sometimes have with humans, their overall population continues to grow.

Regardless of being in the same family as wolves, coyotes don’t form packs. They walk and hunt alone, in pairs, or with their family members. When not roaming, coyotes will be resting in their dens that they make in caves, logs, or rocky crevices. Normally, these animals don’t build their own dens; they will look for an existing den and make it their own.

Coyotes are mostly active at night although sometimes they can be seen during the day too. They will bark, growl, yip, howl, or whine to announce their presence. A coyote will make a long howl to inform others where it is and short barks to warn them of danger.

At the age of 20 months, coyotes are ready to breed. The mating period is usually between February and March, and as soon as a female gets pregnant, she starts preparing a den for the young ones. After a gestation period of 63 days, she produces 3-12 pups and remains in the den, taking care of the younglings.

Both male and female coyotes tend to the pups, with the males going out to hunt and females remaining behind to feed and protect the young ones. By fall, the pups are all grown and can hunt on their own.

What Do Coyotes Eat in the Wild?

There is plenty of food items that coyotes can eat in the wild. However, getting this food is not always easy because these animals have many competitors looking for similar food. The wolf, for instance, is the number one rival of the coyote and will prey on the same food the coyote does.

Regardless, coyotes still manage to get something to eat. They will usually prey on small and medium-sized animals. If they go for larger animals, they will aim at those that look young and inexperienced because they are easier to catch.

Here is a video of how a coyote generally catches their prey in the wild:

Coyotes are naturally omnivores. However, they prefer meat and most of their diet comprises of:

During fall and winter, coyotes can also be seen feasting on vegetables and fruits especially melons, berries, and persimmons. Cayotes’ diet can vary based on the time of the year and their current habitat.

When coyotes are young, they chew on bones, which shortens and enlarges the bones in their skulls. This benefits them when they are older, as they are able to eat extremely hard foods and enjoy a wide variety of these.

Coyotes will mostly hunt at night and rest during the day, but they can also hunt in the daylight if hungry. Depending on the size of the prey, they can either hunt alone or as a group. If they are going for a larger animal, they will mostly go as a group for safety.

How Coyotes’ Diet Benefits the Ecosystem

Even though coyotes don’t have the greatest relationship with humans, their diet benefits the natural environment in so many ways, making it suitable for both humans and other animals to live in. For instance: 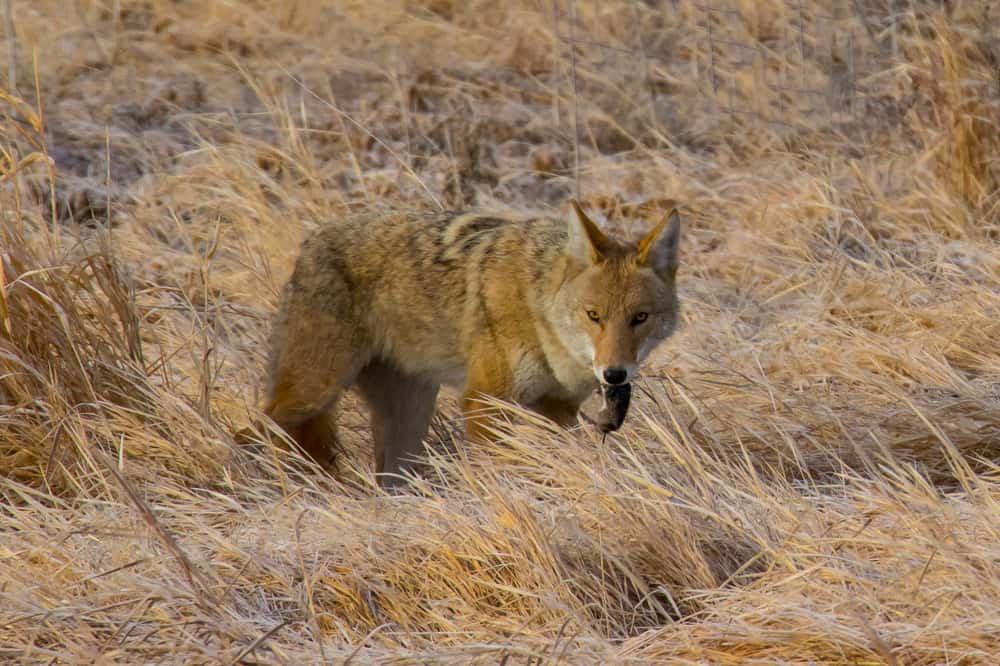 Eastern coyotes are slightly larger than their western cousins and appear more wolf-like. Studies have shown that the western coyotes hybridized with the eastern wolves when they spread east, giving rise to coyotes that are part wolf, commonly referred to as coywolves.

Coyotes are loyal lovers and will usually mate for life. When they find a mate, the couple remains committed to each other for the long haul. It doesn’t matter how many potential mates are available in the surrounding area.

If the male coyote dies, the female will leave the area right away. The only time she will stay is if she has pups, but even then, she will leave as soon as the pups are strong enough to fend for themselves.

While coyotes will walk at the same speed as a dog, when it comes to fleeing danger or pursuing prey, these creatures can run at a speed of over 40 mph. And when they move, they do so with the tips of their toes to avoid attracting attention.

With the population of coyotes growing every day in the wild and food becoming a scarce commodity, more and more coyotes are moving to the cities and suburbs to look for food. Researchers have found that coyotes living in cities exhibit different behaviors than those living in the suburbs and rural areas.

They are not as shy as their rural cousins and will mercilessly prey on cats and other pets. They will also eat human planted ornamental fruits and seeds from patio trees such as figs and palms.

5. Coyotes Can Be Dangerous

Coyotes are naturally shy and will always try to avoid humans. But humans sometimes inadvertently invite dangerous run-ins with these animals when they try to corner or give them something to eat.

We have read about serious injuries and even deaths occurring when humans have tried to get their cats off coyotes’ sharp teeth too. Not just that; there have been countless cases of the predators getting into fights with dogs of their size in human homes, often causing fatal injuries.

While you can’t control the wandering of coyotes in residential areas, the aforementioned situations can be avoided by keeping cats indoors and dogs on leashes and reporting coyotes that show aggressive behavior.

6. Their Fur Color and Texture Depend on Where They Live

Coyotes who live in colder latitudes have a different fur color from those in warmer latitudes. They have a light grey coat with dark patches all over their bodies while those in warmer areas have light red coats with lighter patches.

The same case applies to their fur texture. North American breeds, for instance, have longer and thicker fur while Central American breeds tend to have short, bristle-like fur.

7. Coyotes Do Not Kill Outsiders

Unlike wolves, coyotes will be content only by chasing a trespasser out of their territory. Of course, they will bite and give them a good “beating” but they sure won’t kill them.

8. Coyotes Are Prone to Infections

Of all carnivores in North America, coyotes are the largest carriers of parasites and diseases. Experts have linked this to the animals’ diverse diet and wide range of habitats.

Some of the viral diseases known to attack coyotes include hepatitis, distemper, rabies, and encephalitis. Pups are commonly known to suffer from Tularemia.

Parasitic infections are mostly from fleas, ticks, and mange. In rare cases, coyotes can also catch fluke infections. These can be deadly and 90% of coyotes who get them usually don’t survive.

9. They Are Great Swimmers

Coyotes can swim long distances to escape from predators, but they also do short to medium distances when searching for new territories or hunting grounds.

There is a lot to be fascinated about when it comes to coyotes. From their feeding habits to their way of life, coyotes are truly a gift of nature. Their diet, especially, plays a huge role in controlling rats, rodents, and rabbits that wreak havoc on farms, increasing crop production.