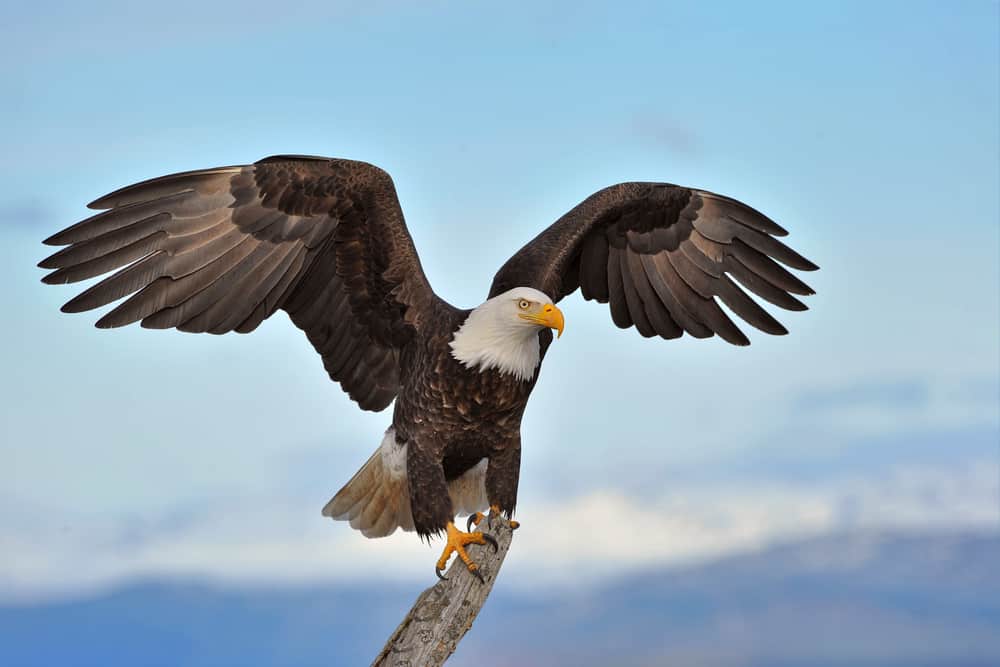 As a predator at the top of most food chains, eagles have the pick of the litter when it comes to food. As expert predators, these large birds can be found on every continent on the planet except Antarctica and hunt various land, land, and even swimming prey. There are about 60 species of eagles out there with some even happy to eat dead animals but most prefer live prey.

So, let’s go over what do eagles eat and mention some of the more common types of eagles’ diets too.

How do eagles hunt for prey?

Flying high in the sky, eagles use their superior eyesight to search for food almost daily. Different eagles have different eyesight potential but most can see clearly at up to two miles or over three kilometers. That’s about eight times farther than a human’s eyesight. It’s also much better than the eyesight of most eagles’ prey which guarantees that these birds of prey almost always have the element of surprise at their side.

Most eagles have a fly speed of around 30 mph but can dive at speeds of over 100 mph such as the bald eagle or even over 150 mph in the case of the golden eagle. This means that an eagle is often able of reaching its prey before it has even noticed the attack.

Once an eagle spots its victim, the bird will retract its powerful wings to swiftly dive down and kill its prey instantly with one hit with its talons. An eagle will rarely rely on its beak to kill its prey and will almost always use its talons instead. Most raptor birds of prey do this, including hawks, harriers, and kites. One of the exceptions in the raptor family Accipitridae is falcons who have a stronger bite.

Usually, eagles kill their prey with their claws, then use their beaks to tear pieces out of their already killed prey and either eat them or feed them to their eaglets. When food Is bountiful, most eagles tend to store one or two pounds of food in their crops – a storage area just below the eagle’s chin.

In case of food scarcity, an eagle can go on without food for a few days but will look for food regardless. If they have eaglets, however, eagles will try to feed them every day and as many times a day as they can – often as much as eight meals a day!

Unlike some other birds, eagles don’t eat and then regurgitate their prey to their chicks. Instead, they just bring the prey to the nests with their talons, tear pieces out of them, and give them to their chicks to eat as they are.

What do eagles eat?

The standard prey of the different types of eagles will vary depending on their size, habitats, season, and how bountiful or scarce the food is. Most eagles feel comfortable killing and carrying prey that’s no more than half their weight. That’s not actually a lot as most eagles weigh just a few pounds themselves so they’ll rarely be able to carry more than 1.5 to 3 or 4 pounds of flesh.

If food is scarce, eagles will resort to going over ever smaller prey if they have to. They can also attempt to kill larger animals such as deer, sheep, or goats but they often are able to only take chunks of such a prey. Going after carrion also won’t be beneath most eagles, especially if it’s been a few days without a meal.

For a quick rundown of what most eagles would go for, these birds’ standard prey includes reptiles such as turtles and snakes, owls and waterfowl such as geese, ducks, flamingoes, rabbits, squirrels, raccoons, prairie dogs, mice, rats, other small mammals, and even stuff such as large insects when need be. Many types of eagles also have no problem hunting for fish such as shad, catfish, and others in shallow waters.

In essence, a hungry or just opportunistic eagle will almost any vertebrae prey. They are also smart and creative enough to pick up and drop prey such as tortoises from the sky in order to deal with their hard shell or knock goats off cliffs (warning, this ain’t a pretty sight).

What do the different types of eagles eat?

There are over 60 eagle species on the planet right now with the vast majority of them living in Africa, Europe, and Asia. There are also two eagle species native to Canada and the United States, nine others native to Central and South America, and three eagles found in Australia.

Dividing them by continent isn’t the best way to examine their dietary preferences, however. Instead, eagles are usually divided into three main categories based on what they eat. Let’s go over them below.

As for their typical diet, it’s exactly what you’d expect – lots of fish found in shallow waters such as salmon, shad, catfish, lungfish, herring, and more. These eagles also won’t shy away from waterfowl birds, amphibians and reptiles, or any mammal they can find.

So, despite their name, these birds don’t really self-restrict their diets but they do prefer to live and hunt near water. Sea eagles are most often the ones responsible for eagle attacks on pets and domesticated animals as most people don’t know to be careful with their dogs when going to the lake or to remote beaches.

The least talked about type of eagle are the snake eagle species. There are two likely reasons why that’s the case – 1) they are smaller than most other eagles and 2) they are native to Africa and the tropical parts of Asia but not Europe, most of the rest of Asia, Australia, or the Americas.

As you’d guess from their names, these small-to-medium-sized eagles specialize in hunting snakes and other reptiles and amphibians such as lizards and frogs. Snake eagles would also hunt and feed on small birds and mammals too, however.

There are many other eagle species that can either be divided into separate sub-groups or are usually grouped under the “other” moniker. Such eagles usually dwell in forest or steppe habitats. Many are smaller and hawk-like, others have a tendancy to go for carrion. Some of the eagles in this group include the Golden Eagle, Steppe Eagle, Long-crested Eagle, the Philippine eagle, and others.

The diets of these birds can be as varying as their habitats. Golden Eagles, for example, are known for attacking marmots, jackrabbits, prairie dogs, voles, mice, squirrels, snakes, lizards, and even foxes and small deer.

The Black-chested Buzzard Eagle tends to go after rabbits, skunks, grey foxes, owls and other birds, as well as snakes and other reptiles. As the name implies, this Buzzard Eagle also often goes after carrion which it competes for against the huge Andean Condor.

The Philippine Eagle also has a curious diet with its preference for flying lemurs alongside monitor lizards, birds, and snakes. The Steppe Eagle, common all throughout Eurasia and Africa, tends to go after steppe pika, voles, birds, reptiles, as well as insects and carrion.

As you can see, eagles are opportunistic hunters that utilize their superior sight, speed, flight, and immense initial striking force to hunt all types of prey. Virtually everything that an eagle can kill with a single powerful blow from above is fair game for these predators. From there they will either carry it to their nests if the prey is small enough or they will eat a bit on the spot and take as much as they can home.

This highly specialized hunting strategy helps keep most eagles at the top of their respective food chains. The only time other predators manage to hunt eagles is when they are either too young or too old. In almost all other cases, an adult eagle is the alpha predator of its biome.