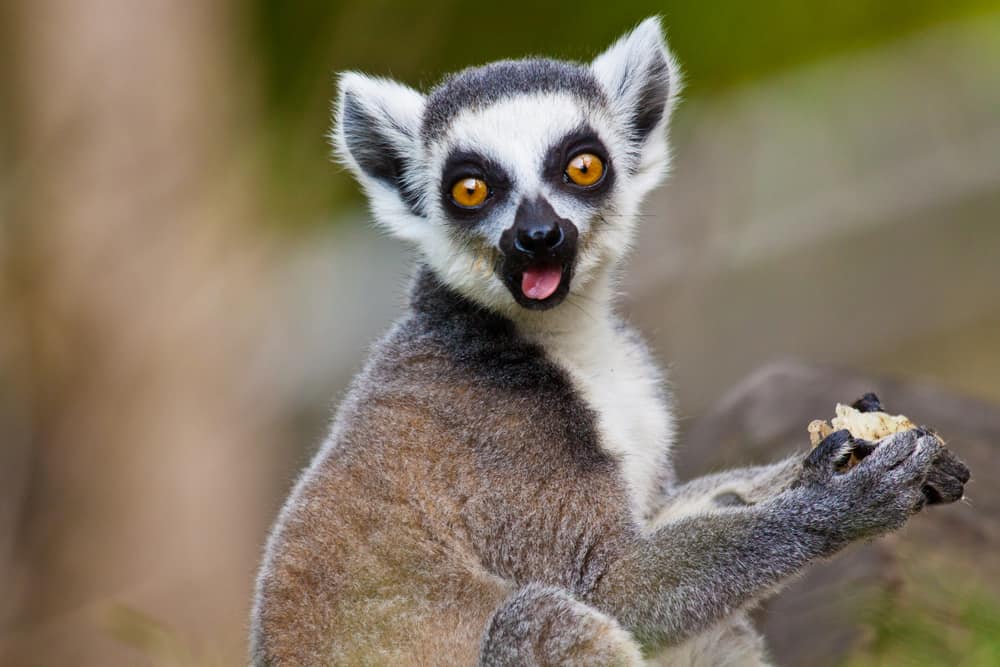 According to a study from the International Journal of Primatology, lemurs are one of the most studied primates. One great thing about these animals is that they know how to adapt to a new environment for them to survive.

In this article, we will discover the diet options of lemurs and how they hunt for their food during the wet and dry seasons.

Lemurs belong to the order of primates. According to a study from New York, lemurs are prosimians. This means that they evolved a long time ago before monkeys and apes were discovered.

The physical characteristics of lemurs generally depend on the type or species. The average size of a lemur is around 2 feet and the average weight is around 5 kilograms.

Many species of lemurs resemble the face of a fox or a mouse. Generally, these primates come with the following physical characteristics:

Some species have longer limbs which they use for jumping.

Before, lemur species have 6 teeth fused and 2 incisors on their jaw. This teeth arrangement is called tooth comb and lemurs effectively use them to shear leaves and crush seeds.

However, as cited from a study from the University of Victoria, because of “adaptiforms”, this teeth arrangement was changed.

Lemurs and Their Habitat

Today, all lemur species are only found in Madagascar. Generally, lemurs can adapt to different areas in Madagascar. Some of these include the following:

In the Philippines, there are animals called flying lemurs or colugos. Many people consider them as one of the lemur species because of their name but they are technically not lemurs. 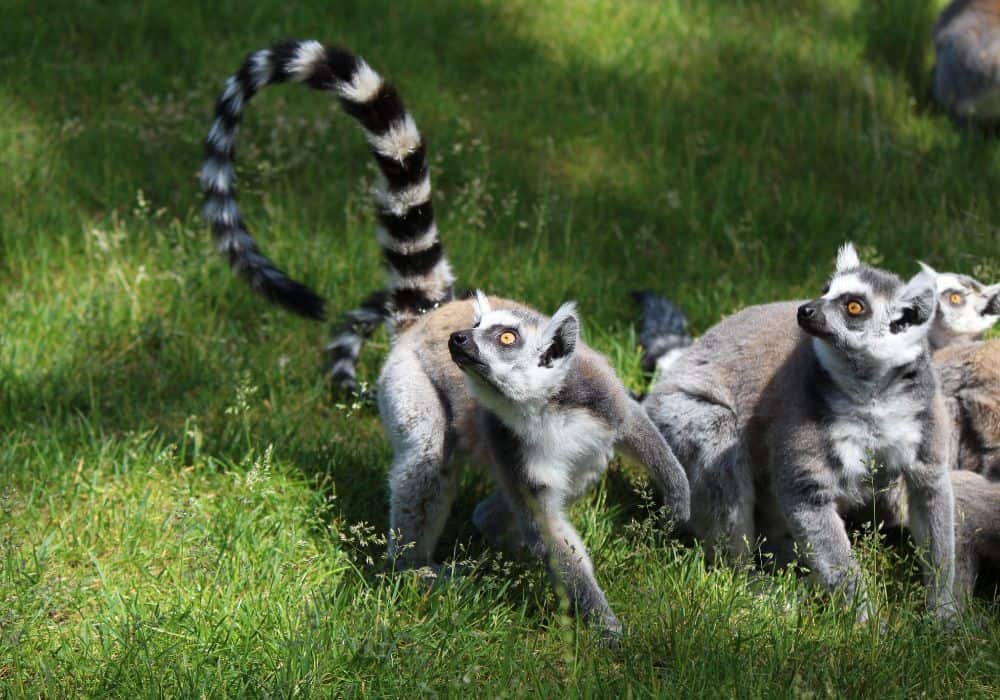 Like other animals, lemurs also have a unique way of communicating with one another and that is through smell and vocalizations.

When foraging, lemurs mark their paths using their sense of smell. Different lemur species also have different scent glands. Usually, these are found on wrists, chests, and near their genitals.

Additionally, the sounds lemurs make depend on the species. For example, brown lemurs and sifaka communicate by grunting, ring-tailed lemurs have a cat-like sound, mouse lemurs have a chirping sound, and indri comes with whaling sounds.

Interestingly, ring-tailed lemurs, also known as lemur catta, use their tails to communicate as well. They hold their tail up to make other lemurs see them.

During mating season, which is from April to May, lemurs also use their sense of smell. Male lemurs rub their scent glands from their wrists and will then wave at females.

If there is rivalry during mating, “stink fights” will happen. For example, two male ring-tailed lemurs will flick their tails at each other and then the females will choose the one that has the strongest scent.

Are Lemurs Related to Monkeys?

Many people also relate lemurs to monkeys. Although they have the same resemblance, lemurs are way far different from monkeys.

According to the book The Mammals of Madagascar, lemurs are less intelligent and aggressive than monkeys.

There are about 100 species of lemurs recorded as of today. These lemurs, either in the wild or in zoos, come with an average lifespan of 17.5 years. However, according to the Duke Lemur Center, the oldest lemur recorded diet at the age of 29.

Furthermore, different species of lemur come from different families. Some of these will be discussed in this section. 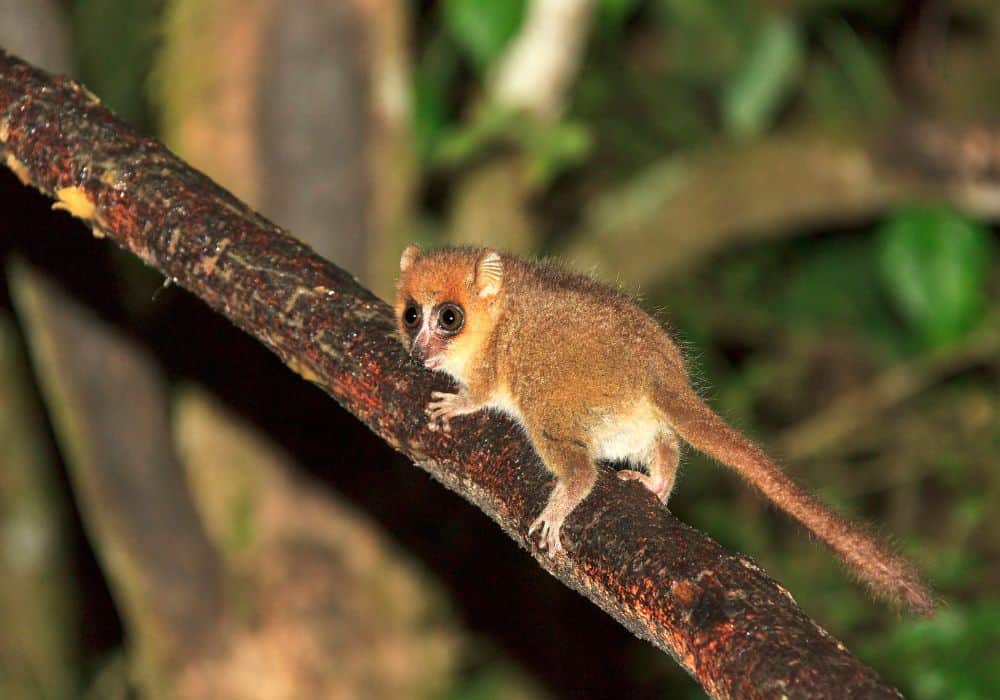 These lemur species belong to the family Cheirogaleidae. The most common one among these is the mouse lemurs and they size just like a teacup.

There are around 20 types of mouse lemurs. Also, they spend most of their time in trees during the day. Generally, they rarely leave forest trees as they are threatened because of their size.

Mouse lemurs also sleep in the morning and forage during the night. 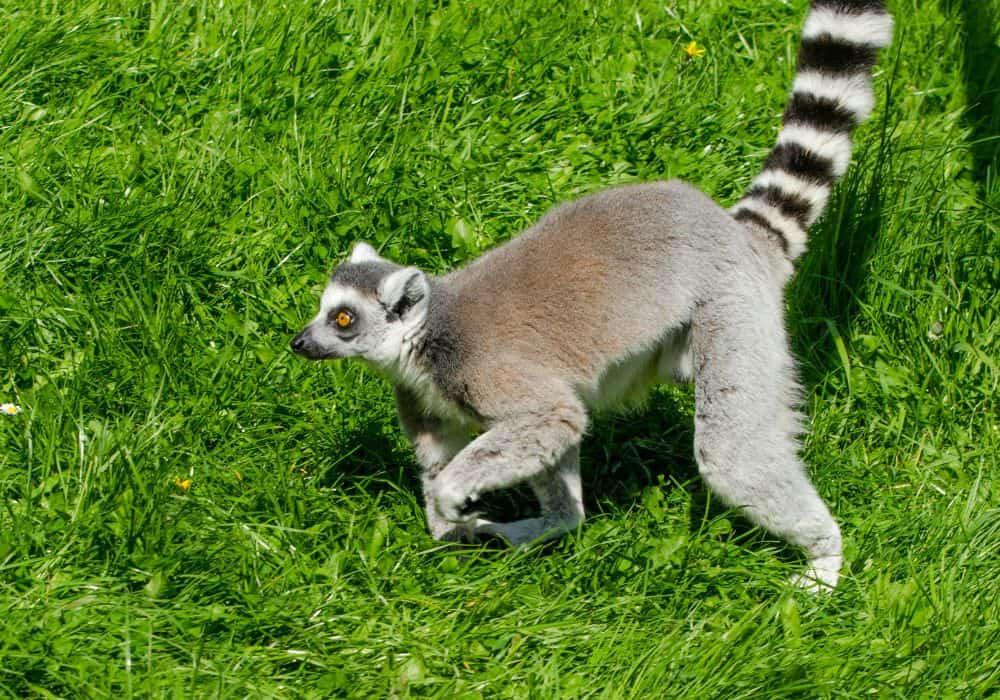 These types of lemurs belong to the family Lemuridae. In this family, most of them are colored brown, except for the ruffed lemurs which are black and white.

Additionally, the tails of the ring-tailed lemurs are vividly striped in black and white. They are the easiest ones to identify and they are the species most commonly seen in zoos. 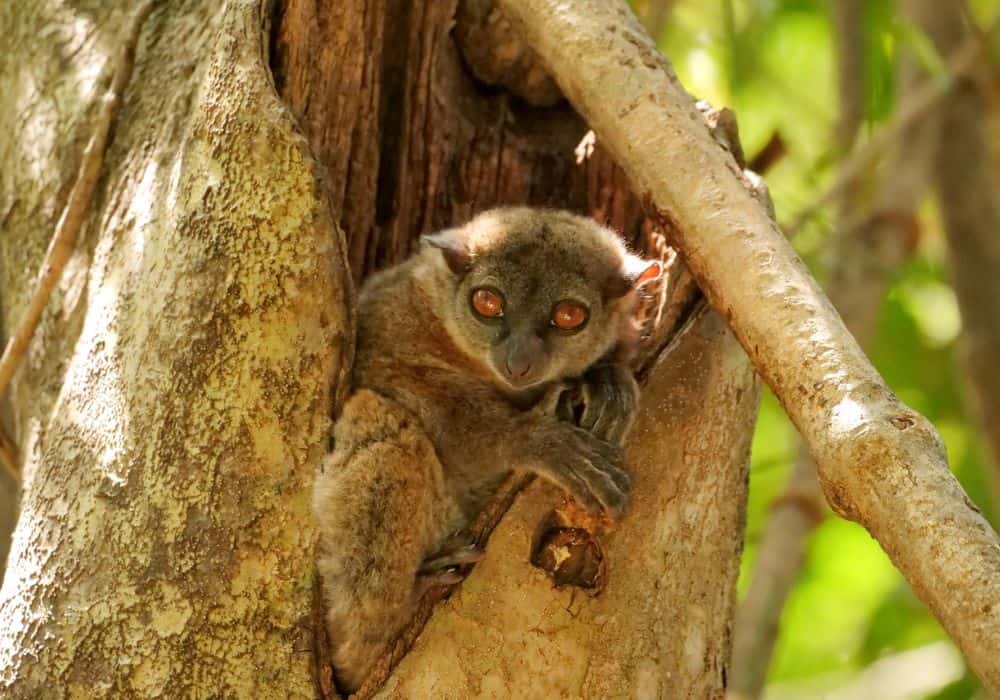 Sportive lemurs belong to the family Lepilemuridae. These are medium-sized lemurs that both live in rainforests and dry forests. There are 25 species of this lemur type and most of them are nocturnal.

According to the book Primate Anatomy, sportive lemurs locomote by jumping in a vertical position and they prefer to sleep in tree holes. 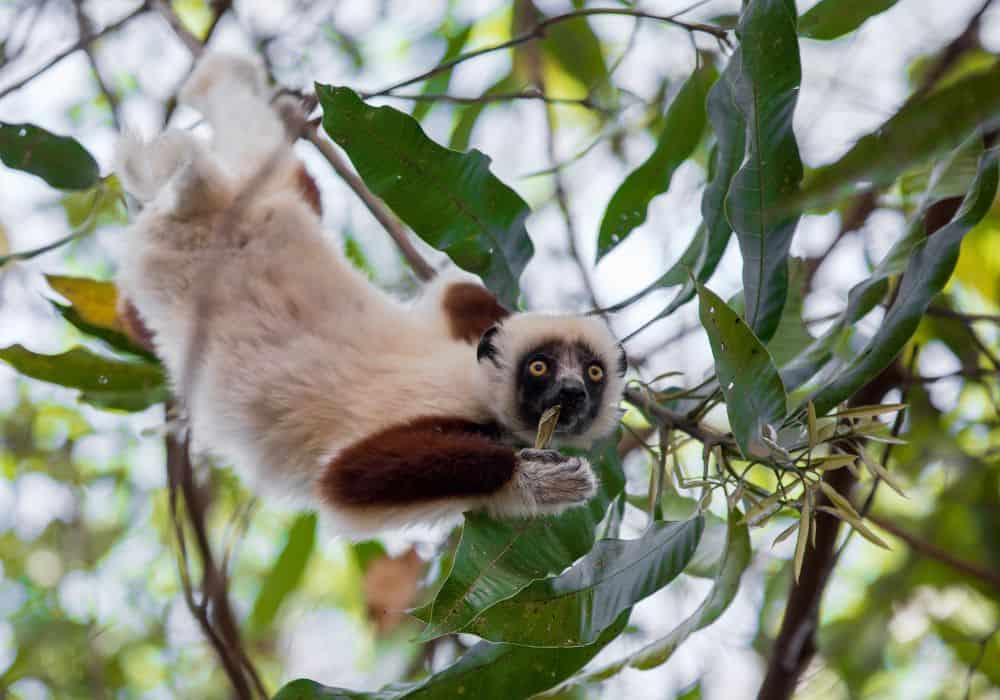 These are the largest lemur species and they belong to the family Indriidae. Compared to other species, wooly lemurs and sifakas are upright. Because of their powerful hind legs, they can move quickly and can clear distances of over 30 feet.

Wooly lemurs are gray-brown to reddish. They have white stripes on their thighs and light fur on their faces. On the other hand, sifakas are multicolored. 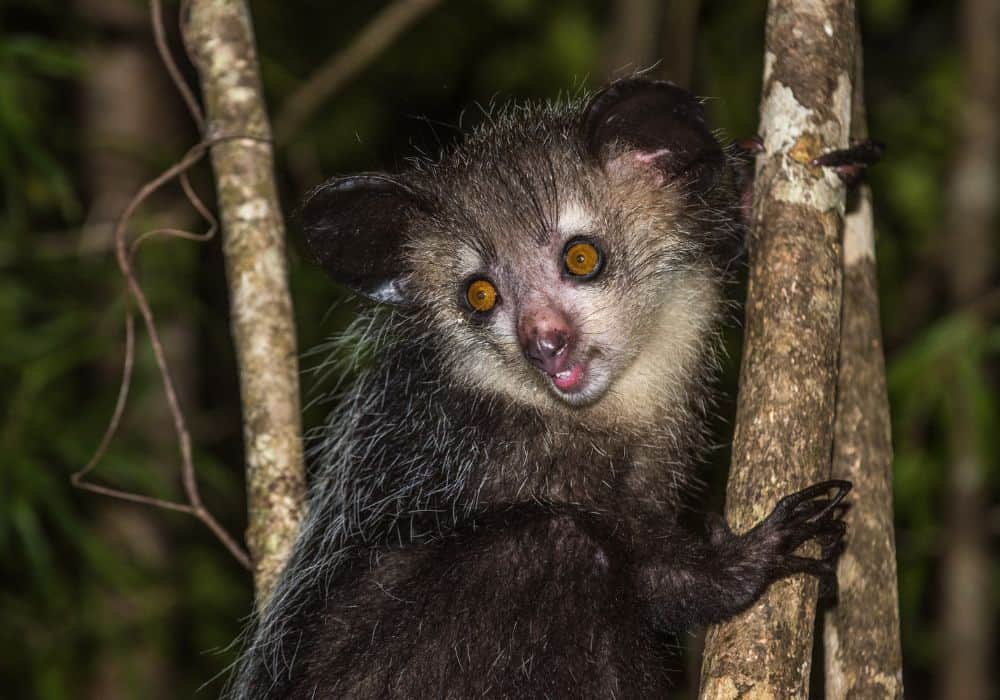 Aye-aye, under the family Daubentoniidae, are the only surviving species of this family. These mammals are colored black and easy to identify because their bushy tail is larger than their body.

They are squirrel-like and their hand structure is very unique from other species.

What Do Lemurs Eat? 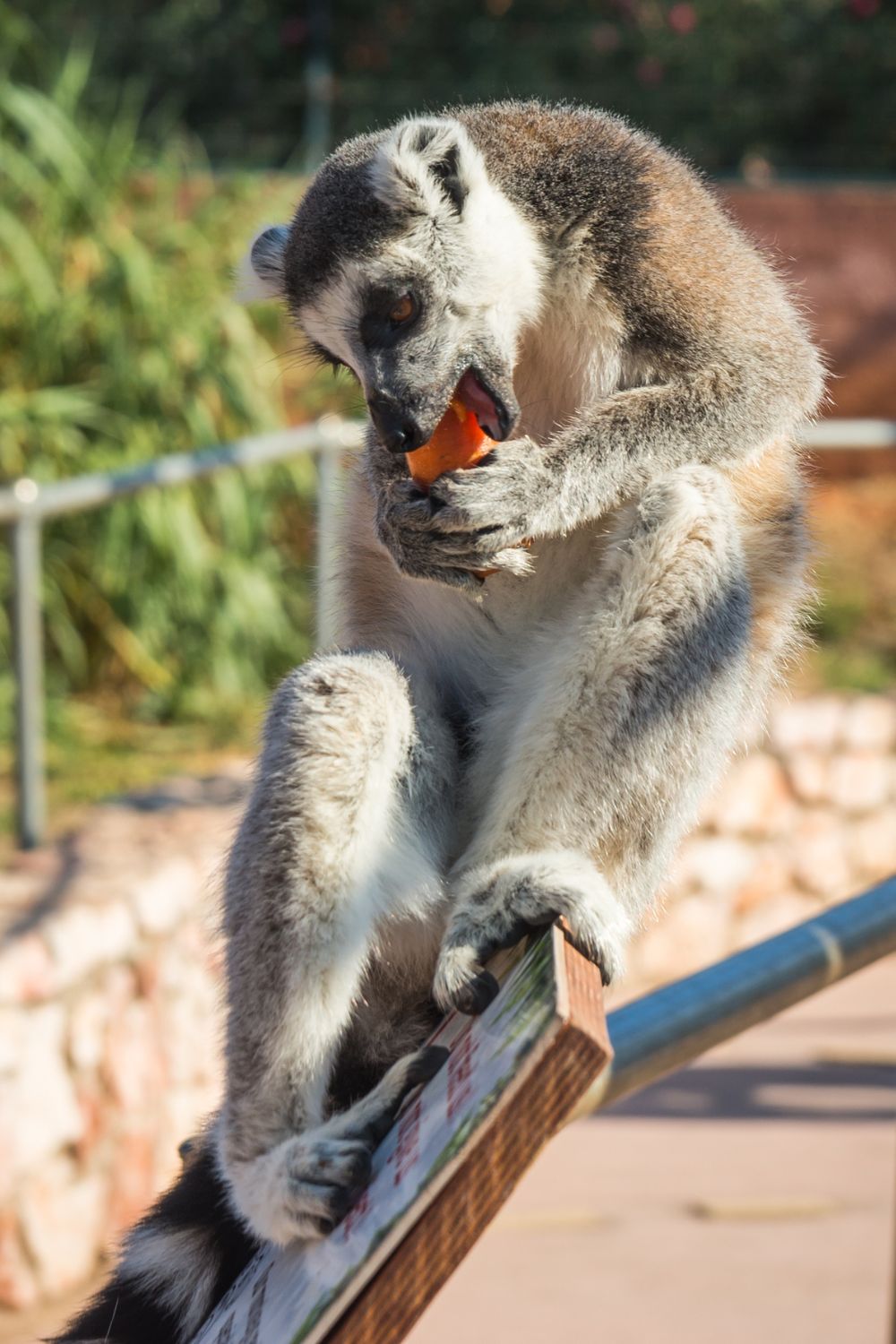 The food lemurs forage depends on their species. These primates also base their diet on the different seasons in Madagascar.

Generally, lemurs help in the reproduction of the plants and fruits they eat. This means that there is a synergism between lemurs and plants in the forests.

According to the Journal of Tropical Ecology, lemurs can carry these seeds into their stomach and deposit them through their feces.

Generally, the diet of lemurs consists of fruits. Some of these include bananas, berries, coconut, lychees, figs, kiwi, mango, nectarine, papaya, and tamarind.

However, according to a study from Scientific Reports, some species find them not that nutritious since fruits in Madagascar contain low levels of nitrogen, thus, they tend to become omnivores.

According to a study from the United Kingdom, apart from fruits, lemurs also eat leaves, flowers, tree trunks and barks, and sap. During the wet season, lemurs are fond of consuming high-fiber foods and high-energy foods.

When lemurs eat, they become picky as well. For example, woolly lemurs and aye-aye prefer younger leaves and plants over old ones.

Lemur species that are considered strict herbivores include ring-tailed lemurs, bamboo lemurs, and ruffed lemurs. These species can also eat 18 ounces of herbs per day.

Aside from fruits and herbs, lemurs also eat veggies that are available in their environment. Some of these are celery, carrots, sweet potatoes, and bell peppers.

According to the American Journal of Biological Anthropology, Lemurs also eat insects like caterpillars and butterflies and small vertebrates like mice. The most common lemur insectivores are the aye-aye and gray mouse lemur.

Aye-aye uses their long middle finger to pluck insects and chew them using their prominent incisor teeth. On the other hand, gray mouse lemurs prefer beetles and frogs.

To supplement the lemur’s diet, they also forage on spiders, small birds, and bird eggs. According to some reports, lemurs take them because they contain the nutrients they need to survive. 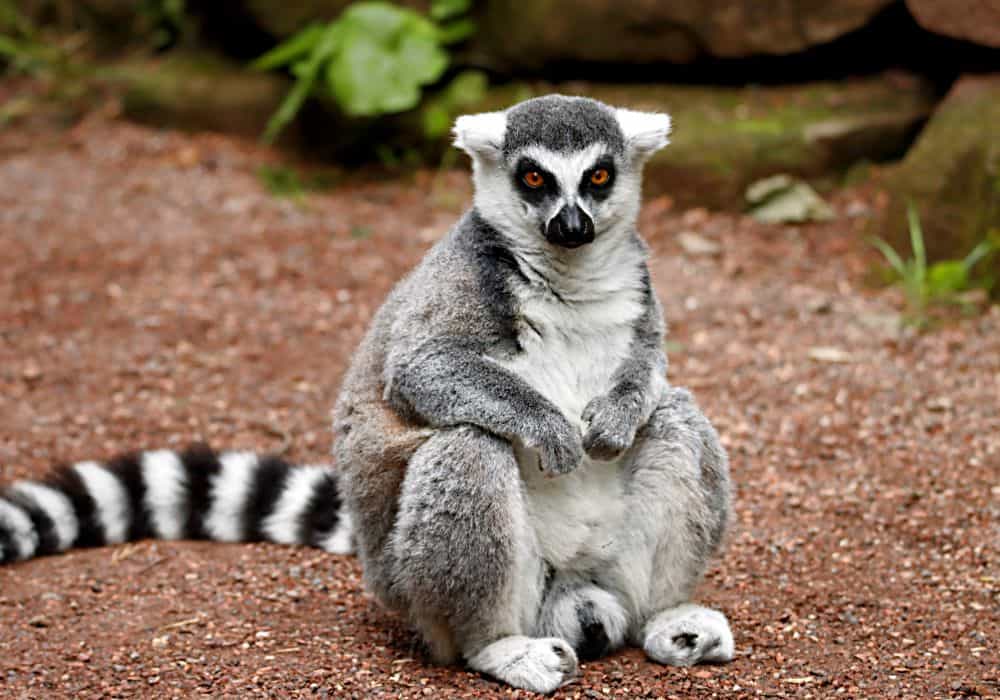 The diet of lemurs during the dry season is different. During these times, lemurs’ diet includes lettuce, cocoons, spider webs, chameleons, and discharges of bugs.

Lemurs are capable of estivation. Estivation is the stage where lemurs decrease their physical activity and slow their metabolism to conserve energy.

Thus, they take as much food as they can during the wet season. This will allow them to store enough fat in case they cannot get enough food during the dry season.

If food sources are not available or if lemurs have enough stored fat, they can hibernate for up to 7 months during Madagascar’s dry season.

Additionally, during the dry season, food resources are vital for pregnant females.

The dry season is around May to October and the mating season lies around April to May. Additionally, the gestation period will be around 130 days. So, if lemurs mated in May, they would give birth around August.

Aside from a higher chance of survival of a lemur offspring, if there is a good food resource, females can even give birth to twins.

Young lemurs will first depend on their mother’s milk. When their first molasses rises, they will start to eat solid foods provided by their parents.

However, if these foods are not appealing, they will try to forage on their own. According to some experts, this is a way of nature to teach lemurs how to hunt.

How Do Lemurs Hunt?

When lemurs forage, they use their sense of smell to lead them to their food sources. They possess a klinotaxis behavior where they pick up nearby food by shifting from side to side.

After successfully finding the location of their food, they will mark this path and location using their scents so that it will be easier for them to find it next time.

Generally, lemurs spend most of their lives foraging for food. When they hunt, they avoid tall grasses where they feel like they are at risk of being hunted and preyed on.

Although lemurs live in groups known as troops, one amazing thing about them is that they take on different feeding sites to reduce food competition. 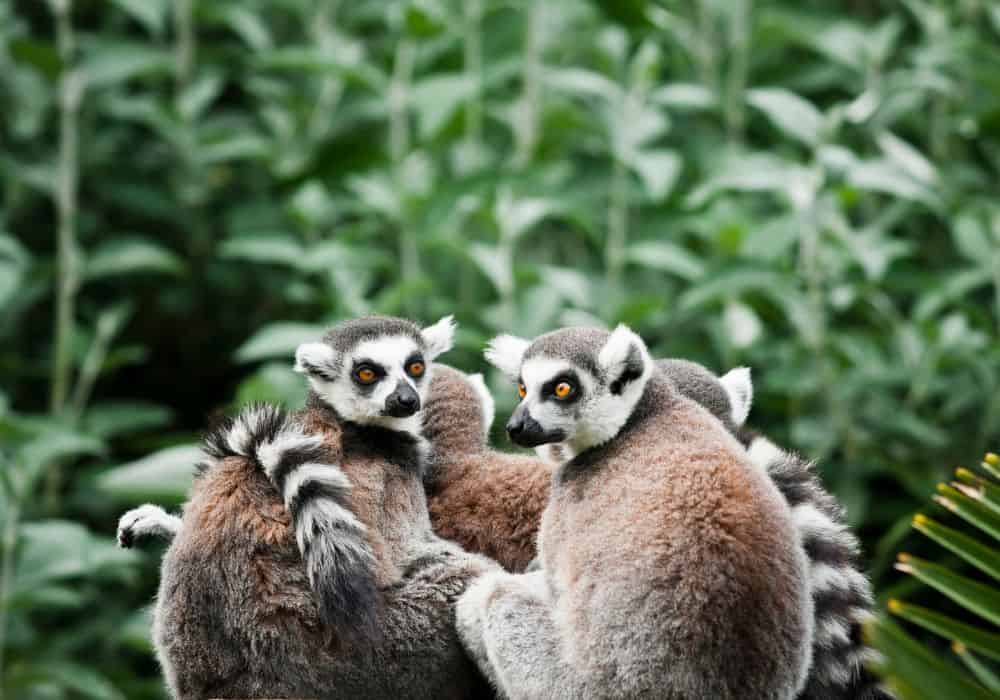 The reason why there are still some lemurs today is that they are isolated on the island of Madagascar. However, when humans discovered Madagascar, around 17 species of lemur became extinct.

In addition to these 17 extinct species, based on the International Union for Conservation of Nature or IUCN red list, the conservation status of lemurs ranges from vulnerable to critically endangered.

For example, the sportive lemurs initially consist of 26 species. However, as of today, there are only 18 species left.

According to zoologists, aside from being hunted, another reason for lemur extinction is because of habitat loss. In one study from the USA, deforestation reduces plant diversity. Eventually, this leads to the loss of food sources for lemurs, which are vital for their survival.

Statistically, Madagascar has already lost around 4.36 million hectares. This is 1% of the globe’s total.

In one report from the USA, around 30,000 lemurs are being kept as pets by humans in Madagascar. Unfortunately, this can lead to increased lemur mortality. Moreover, dogs and cats, the common pets in the household, are also considered invasive animals for lemurs.

Predators of lemurs also contribute to their extinction and their main predator includes the fossas.

Indeed, lemurs are primates with unique diets, lifestyles, and behavior. Some lemurs are frugivores while some are omnivores.

Generally, lemurs prefer fruits and plants. But, some species eat whatever is available in front of them.

Lastly, the diet of lemurs depends on Madagascar’s season. During the wet season, these primates will eat as much as they can so that when the dry season occurs, they will have much energy that they can use since food sources are limited during the latter.