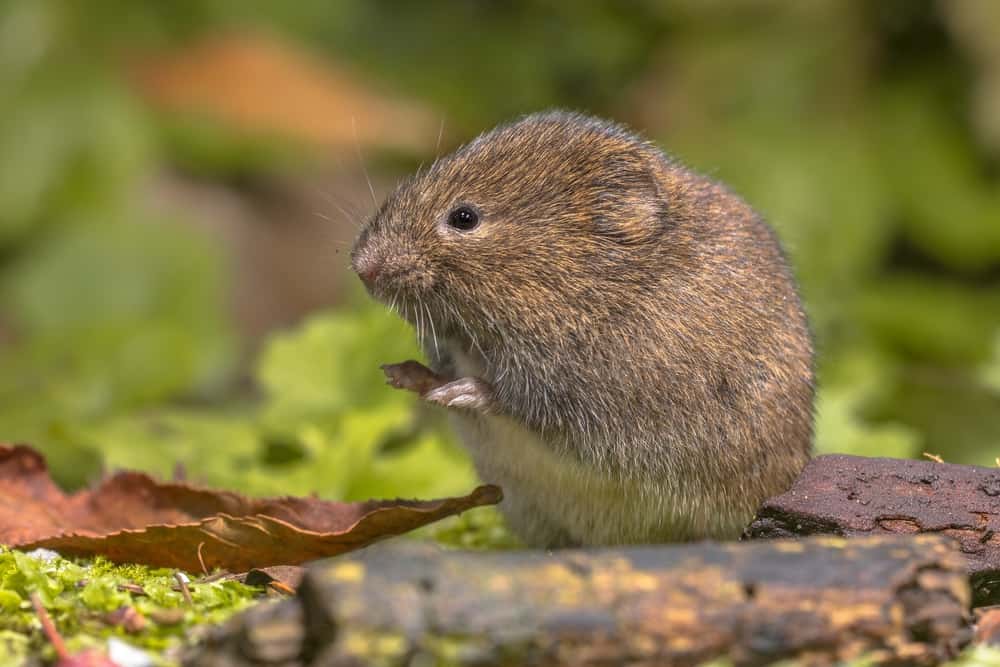 Voles are small mouse-like rodents popularly known as meadow mice. Voles should not be confused with house mice as they are not always found invading the home like house rats. Although voles spend quality time on land scurrying about occasionally, they are always underground most of the time in their burrow system.

Also known as field mice, voles are commonly seen in North America. They are mostly known for damaging roots, trees, grass, plants, and bulbs. Voles vary in shape and size depending on their specie and habitat.

1. The Physical Characteristics of Voles

Like many other rodents, voles are tiny small mammals and look a lot like pocket grasshoppers. Voles have partially hidden ears, a short-furred tail, a heavy and compact body, small eyes, and short legs. Their fur is thick, long, and rough; and ranges between greyish brown and blackish brown. They can measure between 5 to 8 inches long including their tail when fully grown.

Due to the many species of voles, they usually vary in color and length. This animal is lightweight and only weighs a couple of ounces. This allows it to move at a very fast pace, covering up to 6 miles per hour. The meadow vole has attractive physical characteristics but can be damaging to your yard and garden.

Voles also have outstanding orange teeth used to devour plant stems and roots. They have a long head, blunt nose, hairless tail, and sharp teeth for easy identification. They are usually hunted by birds of prey including owls, hawks, and even, snakes.

Voles are mostly found in shrubby areas or grassy fields. Also, they are sometimes found in a wooden and rocky environment. Voles’ preferred habitat is among crop fields and gardens where they have access to plants. They are also found in thick vegetation and underground tunnels.

They prefer to stay in areas with litter, forbs, pond banks, hay fields, pastures, orchards, and grasses. Voles prefer this habitat because it will be very difficult to fish them out for any reason. When feeling threatened, they hide in their underground marrow or freeze on a spot with the hope of not being noticed. 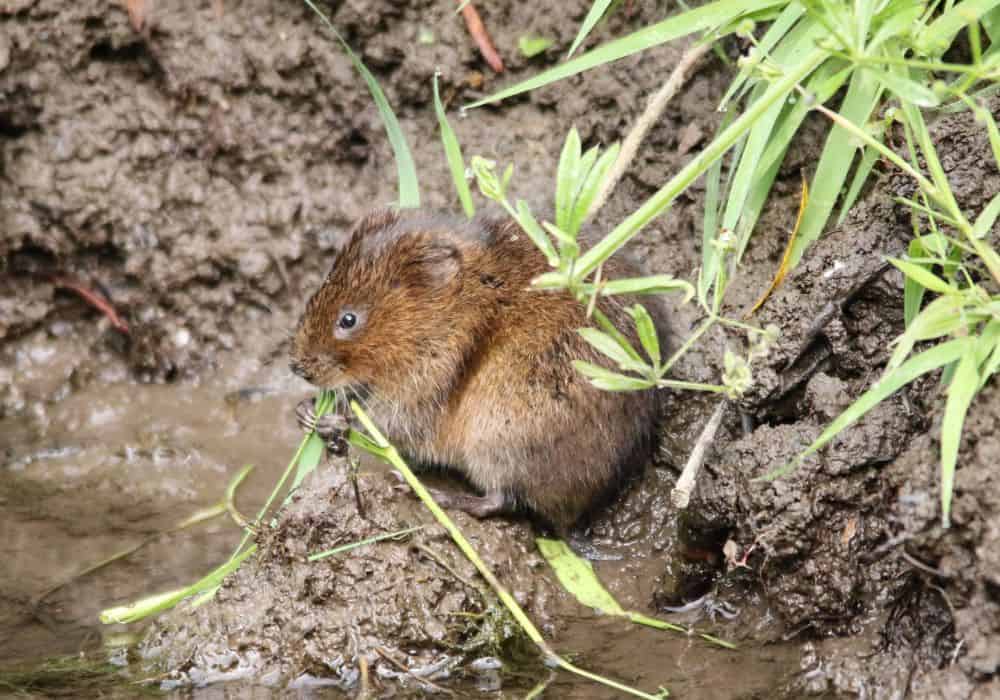 Voles have a gestation period of 3 weeks and only nurse their young ones for4 weeks. Keep it in mind that with their shirt life span, they can produce between 2 to 5 litters. There are exceptions to the larger species of voles which can live up to 3 years but this is very rare. A large percentage of voles die within the first month of existence.

Voles enjoy living in different habitats based on their specie. However, their home range is never above 1/4 acre and always has a dense ground cover. They spend a lot of time underground for feeding and protection. Their range varies according to population density, food supply, season, and habitat.

Naturally, voles are diurnal animals, hence they are always super active. They have a social lifestyle and are found on above-the-ground runways. These animals are not the best climbers you can ever come across so they live in underground nests which are mostly 30 to 40cm deep.

They mostly use the nest for shelter, offspring raising, and food storage. Female voles are very territorial, unlike their male that can’t maintain territory but prefer moving around different female territories during mating. Voles communicate among themselves either vocally with a high-pitched sound or visually. 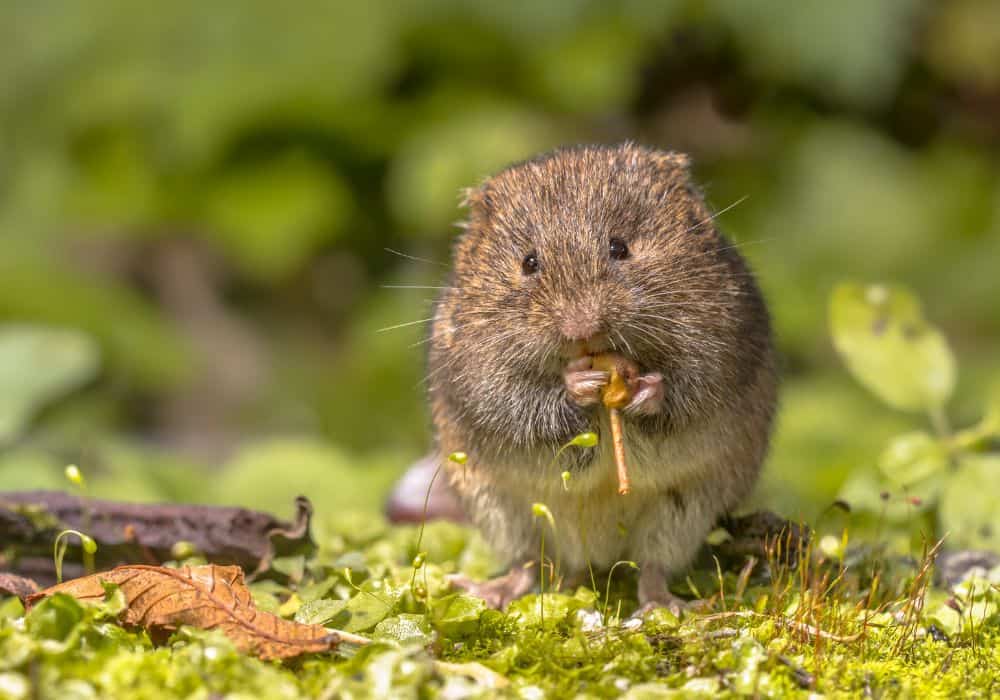 Voles are omnivores and they consume both plants and meat. These animals focus on plants because of their habitat. Some of its food sources include plants, grass, seed, carrion, fruits, clover, tree bark, onions, chickweed, potatoes, beets, dandelion, turnips, apples, and plant root bulbs, daffodils, almonds, garlic, sedges, oats, corn, and shrub bark.

They also eat other dead rodents and small insects to sustain themselves when there is no plant in sight. They have a diverse diet which is quite helpful to the young ones who are yet to master the wild. Their favorite foods are crops, plants, and lawns that belong to people; this is why people describe them as destructive.

Voles eat a lot and can consume up to their actual weight in food every day. They are opportunistic eaters and they tend to eat whatever comes their way when hungry. They hide plants and seeds in their underground chambers to consume them later. Having many voles on farmland can be very destructive as they don’t hold back while eating.

As established earlier, voles tend to eat a lot because they can feed on both plants and animals. They are always active day and night Although they can eat at any time, voles prefer to store their food and hide it for later consumption. They prefer eating at night in obscure locations like an underground burrow.

6. Do voles change their diet seasonally? 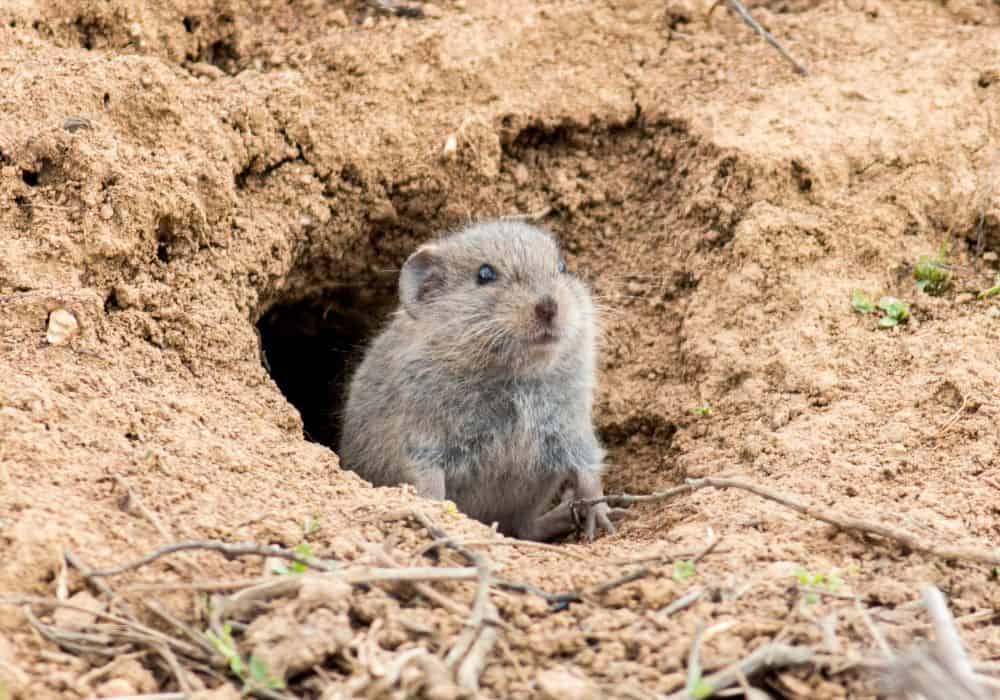 These little mammals change their diet based on the season. During winter, many vole’s foods are not available so they look for other substitutes like roots, barks, and seeds. Voles do not hibernate during winter but are more active during this period.

Although voles are known for storing food, in most cases, they do not always store enough food to last them during the winter, hence the need to embrace other alternatives. During fall and late summer, voles opt for tubers, seeds, rhizomes, and bulbs.

Due to their short lifespan, they do not always live through winter. But when they do, they start reproducing and this can pose a problem to humans.

Voles are tiny creatures making it easy for them to be consumed by other bigger animals. Whether underground or above the ground, voles can be eaten by birds, domestic cats, snakes, domestic dogs, wolves, falcons, foxes, coyotes, weasels, badgers, Bobcats, and Kestrels.

Voles are also common victims of humans. Since it has been established that voles can become very destructive to plants and crops planted by humans, they use pest control to contain them before they become a nuisance. They are often considered a pest by humans, hence the need to get rid of them.

8. How do voles find their food?

These rodents have a strong sense of smell and they bring it to good use when finding food. They also dig and burrow into the ground to find food. They often combine their olfactory prowess and digging ability when in search of food. Voles use their bright vision to spot food and slowly dig with their sharp teeth.

Voles have a basic vegetarian diet so they usually feed on grass, plants, and crops. However, they can also feed on rodents, inspects, and dead animals when there is no plant or grass around. Even though voles are seen to be destructive, they can also be quite helpful as they can help plow the soil and feed on insects and pest grubs.

Wrap the lower trunk with plastic tubing or wire mesh to discourage them from gnawing on tree trunks. Keep light around shrubs and trees, keep the lawn mowed, keep up on snow removal, and remove the dense ground cover. When using anticoagulants and repellants, carefully check the label to ensure it is suitable for use on voles.

2. What attracts voles to a yard?

Voles are attracted to a yard for so many reasons. When you have untrimmed grass in your yard, voles get wide coverage of the yard and infest your home. Also, when there is no protection around the trees, voles will be attracted to eat tree bark and in the long run, kill the trees.

A yard that is not fenced is also another major attraction to voles. These rodents can breeze in and out of a yard without a fence when they want. Lastly, debris in the yard can attract voles. Lots of dirt and clutter such s logs, fallen trees, and leaves can serve as a hiding place for voles.

3. What is the best bait for voles?

The best bait for voles includes gumdrops, mixed peanut butter, oatmeal, small nuts, bread and butter, cherry pits, small flower, and other seeds. When baiting a vole’s trap, ensure that you properly put the bait in and all over the trap.