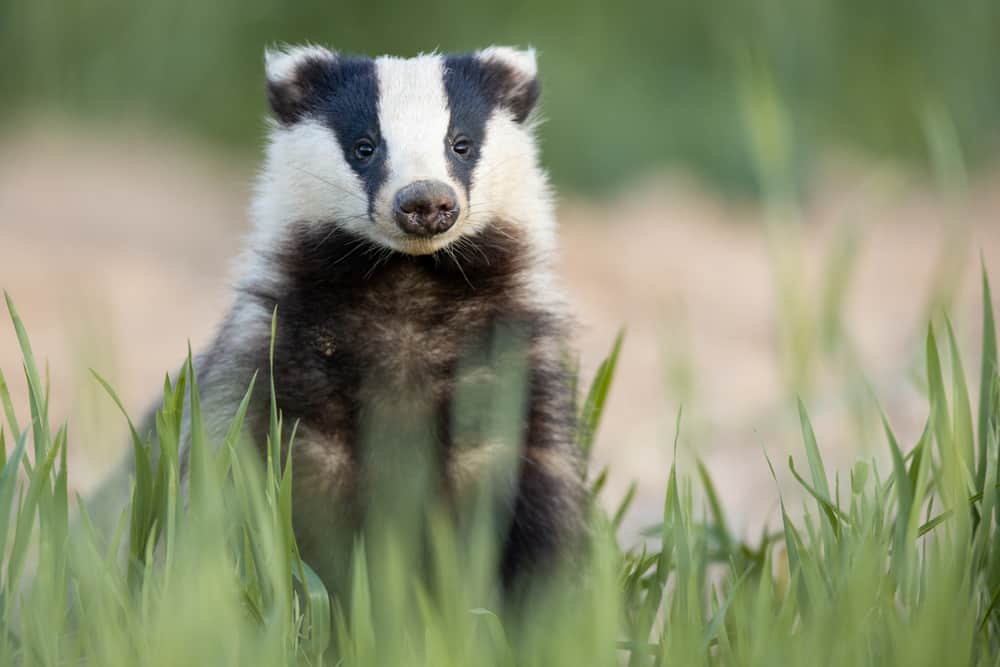 When it comes to animals setting up camp in your garden or local surroundings, there are more troublesome ones out there than badgers. For starters, they will rarely bother you in the daytime due to the fact they are nocturnal meaning they are unlikely to cause any disruption to your day-to-day life.

While it isn’t advised to treat wild animals, such as badgers, as pets you may want to feed your new furry friend(s) once in a while. As long as they don’t become dependent on your food then you shouldn’t face any problems.

In this article, we are going to take a look at what you are allowed to feed badgers while also taking a deep dive into the lives of these little omnivores.

Before getting straight on to their taste buds, it’s important that you gain more of an understanding of what badgers actually are.

Badgers are typically small and stocky animals, measuring up at an average of 80cm lengthways and weighing in at 10kg. Don’t let their slight frame fool you, though, because they have a very powerful bite that they will use if they feel threatened. On top of that, their jaws can lock to create an unbreakable grip so it’s probably best that you don’t get on the wrong side of them!

Their habitats look like small, basic tunnels to the naked eye and are called setts. In reality, these setts can be quite complex with multiple different underground chambers within each one where families and/or clans all live together. Talking of families, female badgers typically have litters of up to six cubs and they can breed all year round.

Given that badgers only typically come out of these setts at night, it can be easy to mistake them for other similar-sized mammals. However, if you look closely and spot silvery fur and black and white markings on their face then you can rest assured that it is a badger.

There are some misconceptions out there that badgers are pests, however, as per the Protection of Badgers Act 1992 it is illegal to intentionally kill or injure a badger in the United Kingdom. Additionally, you aren’t allowed to interfere with a sett so it’s probably best to stop thinking of them as vermin or pests as they are protected by law.

Sadly, around 50,000 badgers are killed each year on the road alone, meaning we probably do owe them some food and water as an apology!

What do badgers eat?

Badgers are omnivores, meaning they have a varied diet consisting of both plants and other animals. The main food source for badgers is earthworms, which is unsurprising given that they spend the majority of the time underground in their setts. In keeping with that theme, they are also partial to slugs, insects and bulbs.

When they venture out of their setts, their diet becomes slightly more appealing as they search for fruity treats, including apples, pears and plums. Interestingly enough, there will nearly always be an elder bush nearby to a badger’s sett giving them constant access to elderberries. Also outside of their setts, they are partial to nuts, seeds and acorns.

In terms of hunting larger animals, badgers are more than prepared to go put some effort in. They are keen hunters of mice, frogs, toads and rabbits, using their claws to dig into the nests and burrows of all of these animals to get their dinner.

Most surprisingly of all, they are the main predators of hedgehogs in the UK. While most animals don’t go near hedgehogs due to the sharp spikes on their backs, badgers are more than happy to go toe to toe with them using their thick skin, sharp teeth and long claws to get the upper hand.

Other surprising animals that badgers have in their diet are lizards, scorpions and even snakes. With the likes of snakes and hedgehogs on their menu, badgers are clearly fearless when it comes to hunting meaning that you should be wary of them if you encounter one up close.

If a badger is struggling to find food then they have been known to raid bins. If you don’t want your food waste bin to be torn apart by badgers then make sure that you put them out to be taken by your local waste management collectors on your allocated day.

How do badgers hunt?

As you can see just by looking at their general diet, badgers are accomplished hunters who are prepared to tackle animals that are of a similar size to them and/or that are poisonous. When it comes to hunting, they use their strengths to their advantage to take down their prey.

One of the main advantages that a badger has over its prey is its incredible sense of smell. Their nose can identify a whole host of scents with their sense of smell estimated to be 700-800 times better than ours. This is an incredible way for them to seek out prey before using their other assets to kill them.

Two of their greatest assets when it comes to physically taking down prey is their sharp claws and slender bodies, which they use together to get food. Given that a lot of their hunting is done underground, they can worm their way into small gaps before using their claws to dig up insects and earthworms.

Additionally, they use the same method to dig up the habitats of rodents such as mice, rats and rabbits. Their claws are so sharp that they literally tear up these habitats, forcing their prey to come out where they are then essentially sitting ducks for the badgers.

Although badgers do live together in groups within their setts, they are generally independent hunters. This is unlike other animals who typically hunt in packs, whereas with badgers it is every man (badger) for themselves.

Is it okay to feed badgers?

On the face of it, it certainly appears that badgers are perfectly capable of sourcing their own food. However, that doesn’t mean they’d turn their nose up if you were to leave food out for them. While there isn’t a ‘wrong’ time to feed them, they will probably prefer the free food during the winter when it is cold.

The following items are perfectly fine for badgers:

Leave the food out before you go to bed to allow the badgers to venture out into your garden during their usual feeding time. If you notice that nothing has been eaten then remove the food in the morning to prevent other pests from infiltrating your garden.

There is no right or wrong way to present the food. Leaving it all in a heap will work just fine for the badgers but if you want to observe how these mammals operate you could scatter the food across your garden to watch them sniff it out.

In terms of how much to give them – a large handful is enough. Think about how much you’d give to a pet cat or dog as a good guide.

Finally, badgers also need water to survive so if there has been a bout of dry weather, consider leaving out a bowl of water for them to drink from. This is also something you can do if the temperature drops to close to 0 degrees in the winter due to the fact that any moisture underground is likely to be frozen.

As mentioned at the top of the piece, it is important that the badgers don’t become reliant on you for food so don’t make feeding them a regular occurrence. As an occasional treat now and then, though, there is nothing wrong with helping the little guys out.

Given that we’ve spoken in length about how sharp badgers’ claws are and how aggressive their bite is, you are probably wondering whether feeding them is worth the risk. Don’t worry, though, you aren’t going to feed them with a spoon – simply leave the food out for them to eat and watch from a distance.

Regardless, they will not go out of their way to attack you but if you start interfering with their setts then they may well retaliate instinctively.

Whether they are harmful to your garden is another matter altogether. Unfortunately, if you make life too cushy for badgers by providing them with food and water all the time then they could get comfortable and start digging up your garden.

Additionally, if you have any small plants in your garden then badgers have been known to trample them so just bear in mind these potential drawbacks before putting food out for them.

To conclude, badgers have a vast diet that should in theory mean they never go hungry. They have an endless supply of earthworms and are capable hunters, meaning they largely enjoy a hunger-free life. However, if you do feel like treating them to some food in your garden then use our list of approved foods to ensure you are doing it safely.