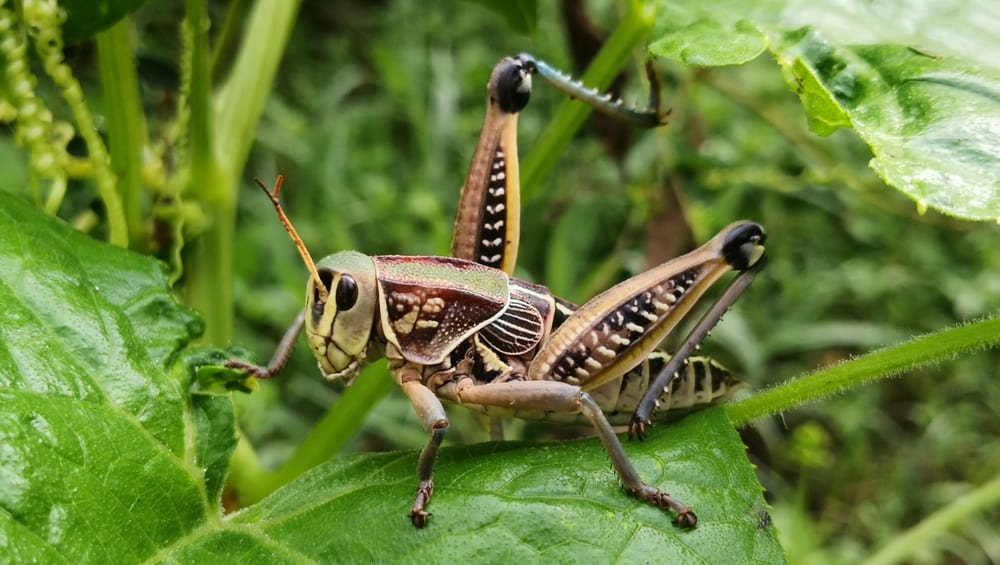 Grasshoppers, as little as they are, hold a lot of meanings. It symbolizes good fortune, wealth, music, and longevity to some, and to others, they are merely a representation of destruction and hostility.

Some even only see them as a delicacy for their plates. Grasshoppers are all-rounders, but before we dive into grasshopper symbolism, here are some facts about grasshoppers. 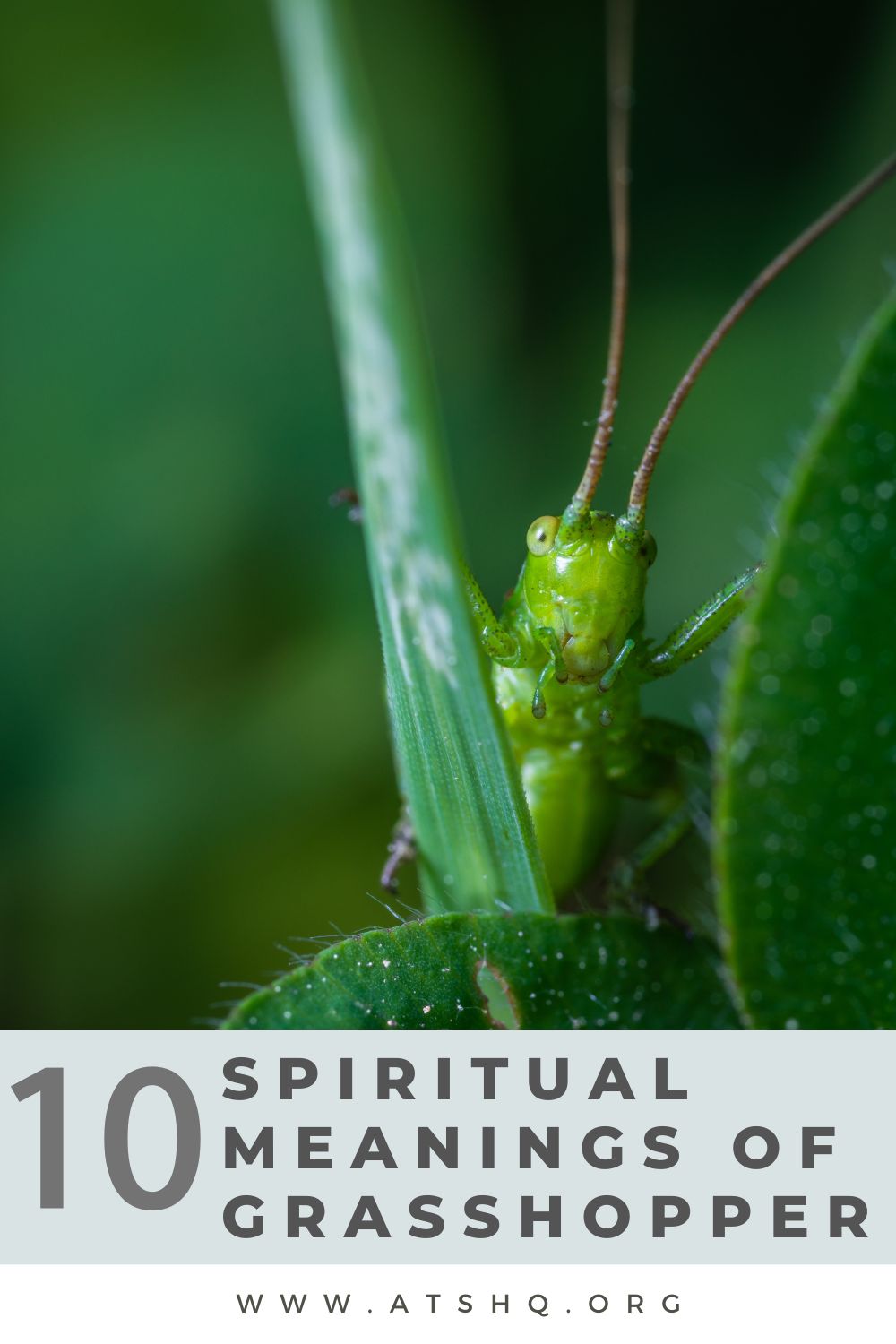 Grasshoppers are insects belonging to the suborder Caelifera. They are closely related to crickets. Having existed since the Early Triassic period, about 250 million years ago, these creatures stand as one of the oldest insects.

They possess wings that help them fly only a short distance and are characterized by long and strong hind legs, which help them hop as high as twenty times their height.

They are one of the masters of camouflage as they can blend in and mingle with their environment so they can be away from the plain sight of predators.

Although you can sometimes see one or two grasshoppers alone, it is rare as grasshoppers love to move in swarms. They are herbivores in nature and are a real threat to farmlands as they can cause significant damage to crops.

Grasshopper makes sounds and rhythms like two sheets of sandpaper rubbing against each other. It makes this sound differently by flapping its wings and rubbing them against its legs.

This sound is not a call many might mistake; it is just the grasshopper flapping its wings. You might see it dance to its rhythm sometimes.

Humans and Grasshoppers have coexisted for a long time, and while humans see grasshoppers as awful pests, grasshoppers see us as predators.

In some parts of the world, like Mexico and Korea, grasshoppers are used as food.

Grasshopper As A Spirit Animal 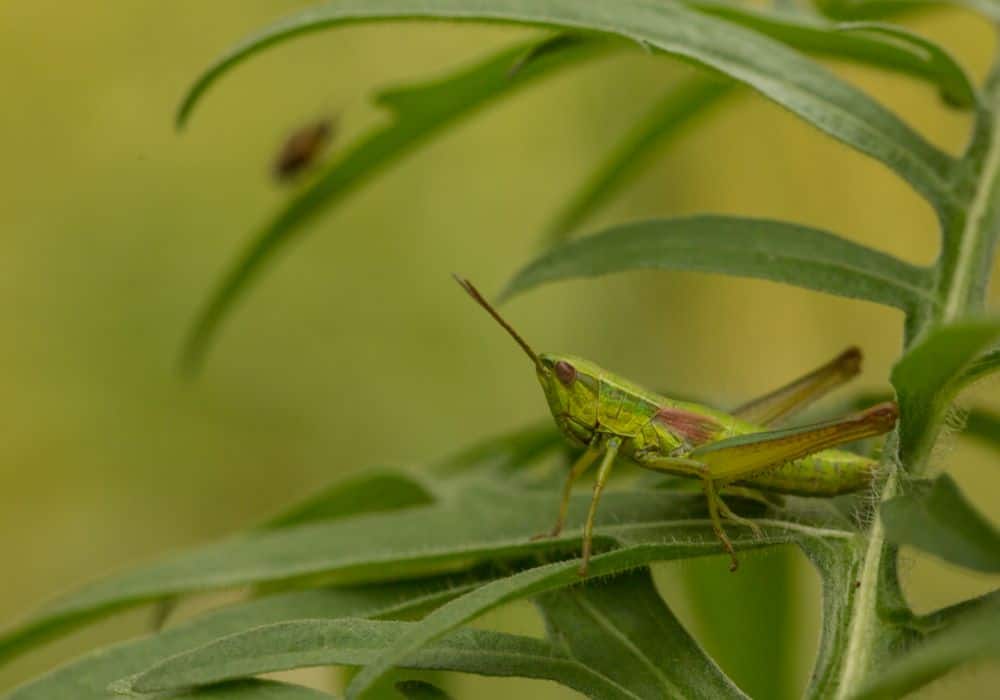 If you have the grasshopper as a spirit animal, it means that although you might be carefree and sometimes lighthearted, you are persistent. According to worldbirds.com, you have an endless drive to progress to the nearest future and see what it holds for you.

Since the insect is the best at camouflaging, you can quickly adapt no matter what.

You tend to daydream a lot, and you have a lot of aspirations. However, daydreaming alone is not enough; you must listen to your inner voice and push forward.

With the grasshopper as your spirit animal, you have good luck, healthy relationships, and wealth in store for you.

Grasshopper As A Totem Animal

Those with the grasshopper totem animal have incredibly high intuition. Although they are dreamers, they are also planners and like to see their dreams and wishes come into play.

Although they might fail sometimes, it is not expected as their inherent qualities make them primarily successful.

These people are often carefree, generous, and helpful. They also tend to be nomadic, as they cannot stay in a place for too long.

If the grasshopper is your totem animal, you should use it for your musical talent. This talent could come in any form, from your voice to playing musical instruments and even having the ear to appreciate good music.

You also must teach and guide others in their different stages of life. You tend to be intolerant of liars, fools, and close-minded people.

Although you can be fun and carefree, you become very destructive when angry and should try to keep that in check.

Some things that can lead you to your Waterloo are arrogance, resentfulness, greed, and laziness, so you should be careful about that. In all, if the grasshopper is your totem animal, remember always to trust your voice.

Grasshopper As A Power Animal

The grasshopper power animal helps with challenges and transitions. It tells you when to leap, and it is also there to tell you when to take a break.

According to symbolsage.com, the vibrations of the grasshopper help transport you to different dimensions. Those with the grasshopper as their power animal can communicate on a divine level.

Grasshopper Symbolism In Different Parts Of The World 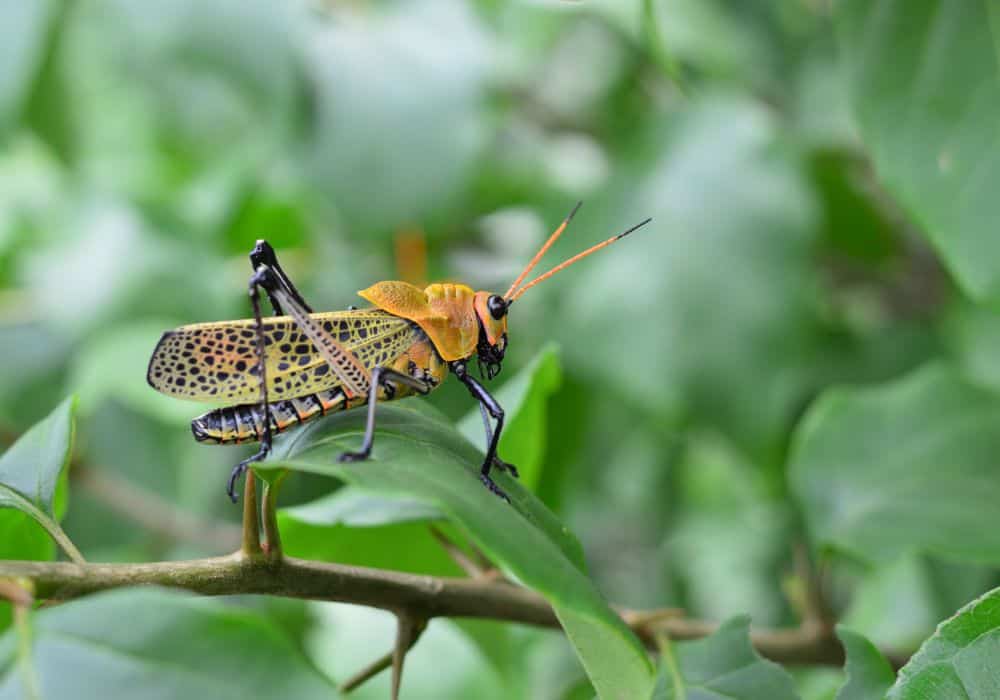 Different cultures hold grasshoppers in different lights; while some see these insects negatively, others keep them on a high pedestal. Here are the symbols of the grasshopper in four different parts of the world.

In Native America, different cultures hold different symbols of the grasshopper. In Agricultural Societies, where farming is their principal occupation, the grasshopper is attached to negativity and destruction. They are seen plainly as pests that exist to ruin farmlands.

In stories, grasshoppers are depicted as being deceitful, greedy, and careless. They also represent hostility and bad luck.

There exists a myth in the Hopi tribe to keep children in check. It tells children that a grasshopper will bite their noses if they disobey their elders and break taboos.

Another myth where the grasshopper appears is the story of Gluskabe, who goes to fight the grasshopper of a wicked magician so he can retrieve all of the stolen tobacco that the magician refused to share.

However, he holds the grasshopper in his hands and rubs his palms together so that the grasshopper shrinks. The grasshopper became so scared of humans that it spits out a little bit of tobacco whenever you carry it to show that it is willing to share.

There is a long list of Native American myths and folklore about the grasshopper, and you can check out native-languages.org to get into them.

In the native American Indian society, the Iroquois nation, it is believed that if you see a grasshopper, it is a message of glad tidings and brings good and joyful news to you.

Eos, the goddess of dawn, fell in love with Tithonus, who then was a mortal man. Not wanting to lose him to death, she begged Zeus to make her lover immortal. Zeus grants her wish and makes him immortal; however, in doing so, he doesn’t stop Tithonus from aging.

Tithonus then grew older and shrunk until he became a grasshopper. His noise became annoying to Eos, who then sent him away.

Apart from this mythology, the grasshopper was also the ancient symbol of Athens. So the Athenians would often wear gold jewelry in the shape of grasshoppers to show their civic pride and allegiance.

The grasshopper was also a symbol of status and nobility.

After the ten plagues of Egypt sent by Moses, the grasshopper stands as an unfavorable symbol in Egypt ever since. It is linked to Seth, the god of storms and disasters.

Egypt Is not the only part of Africa with grasshopper symbolism; there also exists African folklore about the toad and the grasshopper.

The toad and the grasshopper were two very close friends that did everything together. However, they had never eaten in each other’s house. They decided that since nothing was stopping them from doing so, they should eat in either of their houses.

The toad asked him to stop his chirping as he could not eat with such noise, but the grasshopper could not help it as every time he tried to eat, he made a chirp. The grasshopper got angry because the toad didn’t understand, and for every chirp he made, the toad made a complaint.

The grasshopper eventually could not eat and invited the toad to his house for a meal the next day. After washing his forelegs, the toad hopped to the table; however, the grasshopper asked him to rewash his legs as all of his hopping had dirtied them.

This went on for a while, and the toad got angry because he believed the grasshopper didn’t want him to eat. And that marked the end of their friendship.

This story is often told to teach fairness and the acceptance and tolerance of one’s flaws if you genuinely want to live happily with them.

In Chinese culture, the grasshopper symbolizes nobility, wisdom, and longevity. It also has other symbols, like having a fighting spirit, fertility, prosperity, happiness, and virtue. Feng Shui sees the grasshopper as a symbol of wisdom, immortality, and protection against traitors.

Grasshoppers are kept as pets in most Chinese households because it is believed that the grasshopper is the reincarnated form of a dead loved one.

Japan also has a symbol attached to grasshoppers. It is very uncommon to eat a grasshopper in Japan as it is seen as a symbol of good luck and a representation of good songs.

In Korea, however, grasshoppers are often eaten. There is also a whole food festival for the particular insect. The festival reminds them of tough times when grasshoppers were all they had to eat. They even have restaurants shaped as grasshoppers. 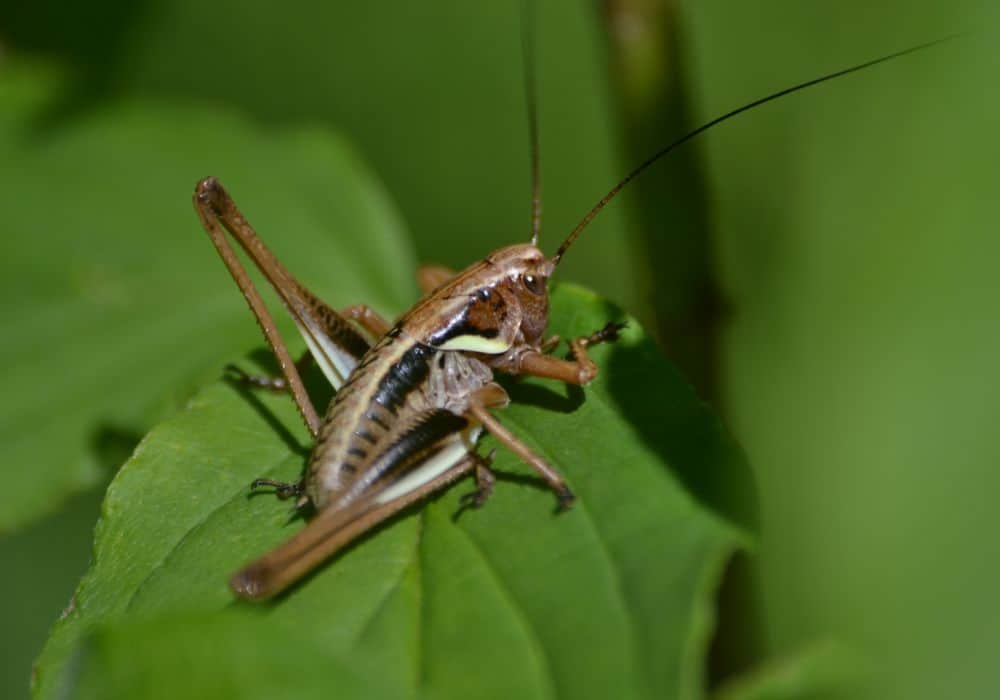 Grasshoppers have existed since Biblical times, and it is no wonder why Christians would hold symbolic meanings to the insects.

Eating a grasshopper will not come across as something new for Christians as they are not strangers to the ideas. John the Baptist had a diet made up of only honey and locusts.

Apart from this, grasshoppers are associated with destruction, like in the ten plagues of Egypt. In the bible, grasshoppers are also similar to humans. They are less powerful, less wise, and smaller than God; however, they can jump so high and aspire to reach as high as the heavens.

When Moses sent twelve Israelites as spies to the land of Canaan, about 80% of them came back and said that they were like grasshoppers amid the Canaanites and that the Canaanites could crush them with ease.

They forgot that the grasshopper was more than met the ordinary eyes as it could cause havoc that even humans could not control, and it could also jump so high and aspire to reach where it wanted to be.

Grasshopper As A Tattoo

A grasshopper tattoo often means good luck, speed, and creativity. It can also mean that the person bearing it is someone that is forward thinking with high intuition. The bearer of the tattoo is humble, appreciates music and rhythm, and values their judgment.

Grasshopper In A Dream

A grasshopper appearing in your dream can mean different things depending on its appearance. If you are eating the grasshopper, it means that you are approaching an issue in your career. However, your loved ones would be there for you.

If you see a dying grasshopper, it is a sign to take good care of your health and the health of the ones you love. It is also a sign of a severely ill loved one.

A giant grasshopper in your dream reminds you that you can only achieve what you wish for if you never give up. It also shows that you have been working hard and need a break.

A dead grasshopper in your dream means that your parents or partner’s parents will offer you financial support soon.

If you bite or kill a grasshopper in your dream, then rest assured that money and good fortune are coming your way. However, a grasshopper coming out of your mouth means deception and slander.

If you see a grasshopper moving away from you, your dreams and aspirations are getting out of your reach, and you need to do something to change it.

Grasshopper dreams mean different things depending on how you see them. Yourtango.com also gives a list of colors you could see a grasshopper in your dream and what each color represents.

These insects are very tiny, but they hold a lot of meanings. If you feel connected to them somehow, remember that they represent not only evil and ruins but also positivity, resilience, humility, and wealth.

The virtues they represent are more than the vices, so do not be hesitant to accept the grasshopper as an essential part of you. Please comment if you have any questions! Thank you for reading.