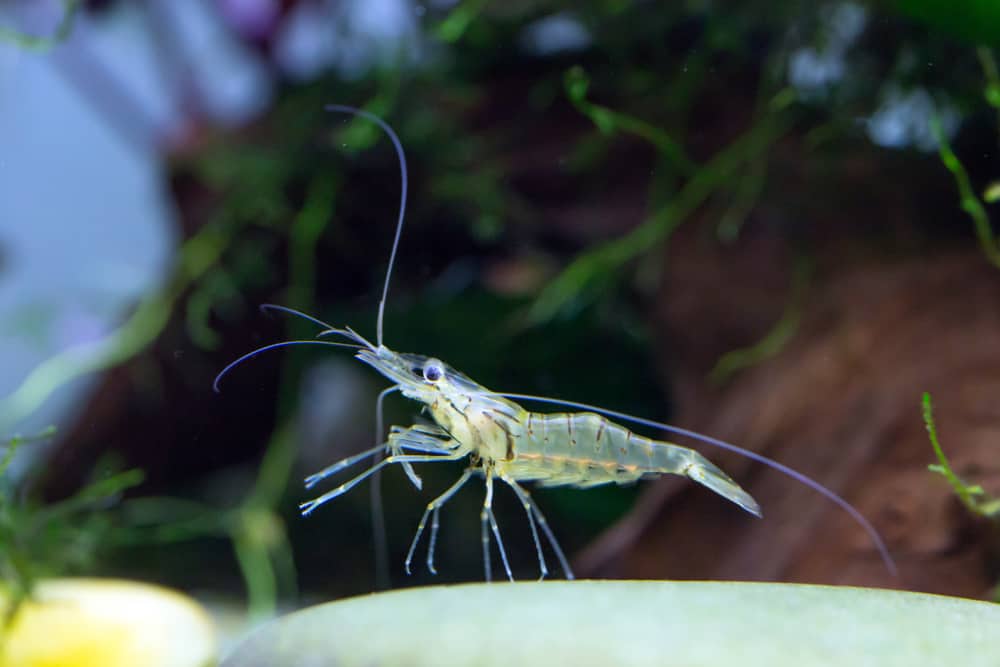 Ghost shrimps are the most popular aquarium animals also known as glass shrimp or grass shrimp. They are quite adorable and inexpensive to keep. Most people purchase them to serve as feeders to larger and aggressive animals. Whereas, ghost shrimps can serve many other purposes.

This freshwater aquarium shrimp can be kept with tank mates or other shrimps in a tank or can be raised separately. Whichever you want, ghost shrimp is fine with that. They can serve as pet and feeder specie to new aquarium owners. At pet shops, they are always kept in a small tank with air stone pumping bubbles or a sponge filter.

Many people might think it is impossible to meet their nutritional needs since they are not practically fish. But in terms of diet, they are not so different from fish. In this piece, we will take you through important on what ghost shrimp eats, their nature, physical characteristics, and many essential tips on how to feed and raise ghost shrimp.

1. The physical characteristics of ghost shrimp 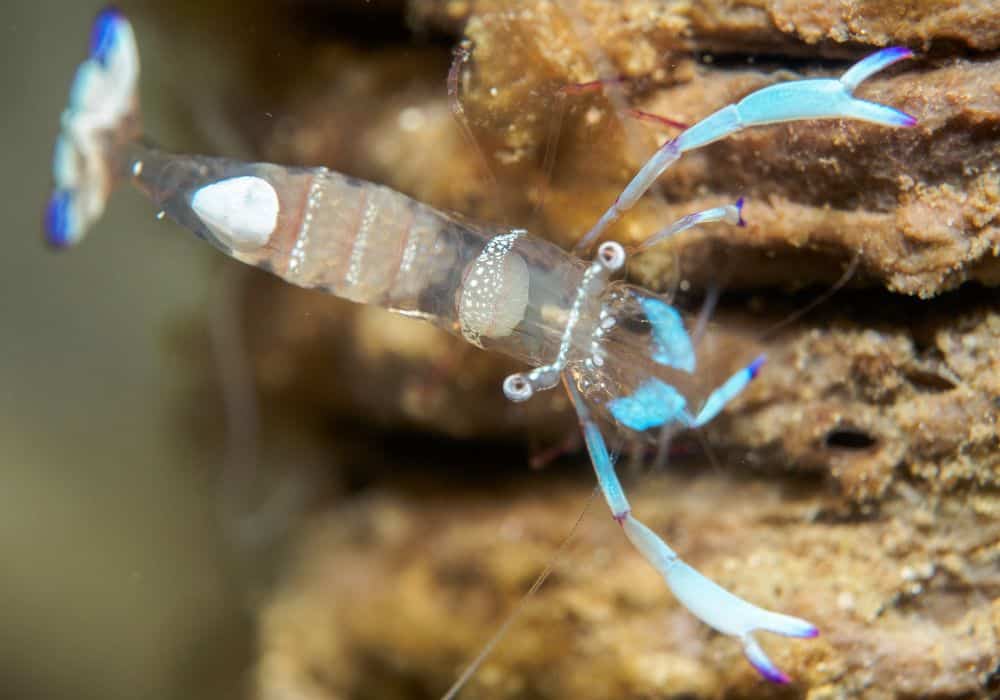 Ghost shrimp are relatively small with their adults not more than 1.5cm long. The biggest is about 2cm long and they are often female. These animals had a lot of physical characteristics that earned them their name ghost shrimp. They look like pale and transparent ghosts when swimming in the tank.

They have a very clear body that makes it sometimes very difficult to differentiate them against some backgrounds. This is an advantage to them because it makes it very hard for predators to spot them.

They have four antennae with a pair longer than the other. They use these antennas to communicate with each other, navigate around objects, sense water conditions, and find food. Their body part is divided into the abdomen and cephalothorax.

The abdomen is the lower part of their body which contains their intestine and reproductive organs. On the abdomen, seven plates of shell overlap and it makes it easy for them to curl their tail. Shrimp make use of their tail to elude predators.

The cephalothorax is simply the head’s chest. Their head looks a lot like crayfish, lobster, and other varieties of shrimps. They have an eyestalk of both sides of their head which they move to see their environment.

They don’t move their bodies around while using their eyestalk to prevent predators from spotting them. Ghost shrimp also have carapaces that are located behind their eyes. The carapace is the big shell that covers their whole body (that is the cephalothorax). It houses the shrimp’s organs like gills, stomach, and heart.

The shell is very transparent and you are likely to see as food eaten moves to the digestive system. They also have five pairs of working legs known as pereiopods which they use to walk and climb on plants and rocks. Two of the pereiopods have small claws which they use to put food into their tiny mouth. 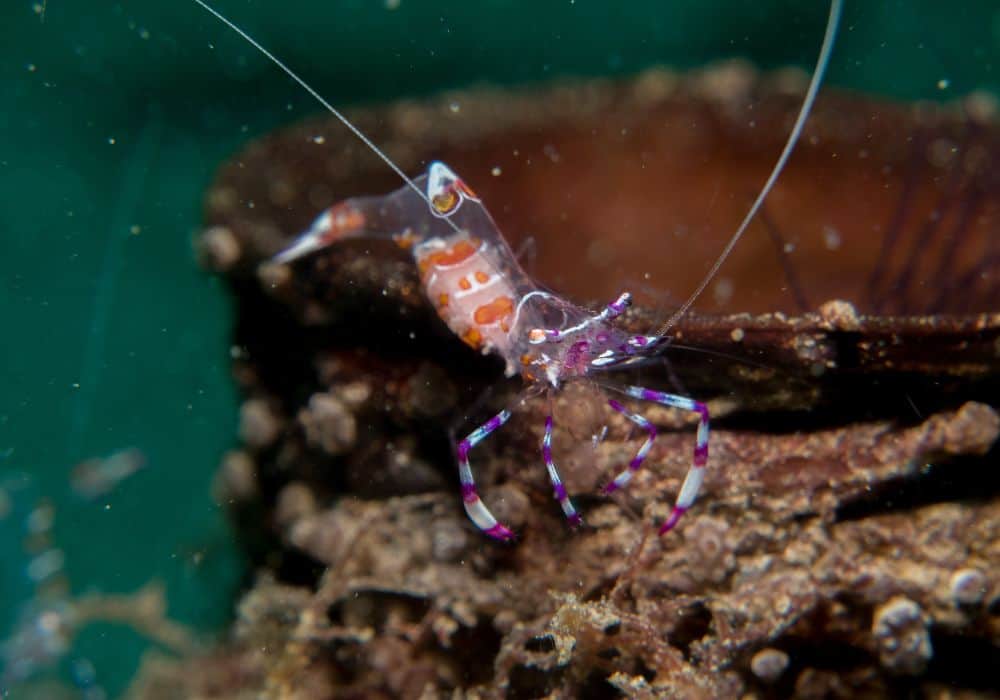 In as much as ghost shrimp are in the right environment, they are always fond of ignoring others in the tank or staying by themselves. They are always shy around fishes and do not want to disturb them. Ghost shrimps are shy and peaceful.

Ghost shrimp are freshwater animals often found in North American lakes. They originated from freshwater regions with bodies of water like streams, rivers, creeks, lakes, and ponds. These habitats are ideal for them because they can interact with this environment and make it a suitable habitat for themselves.

They can also live comfortably in a tank or gallon with finely-grained. When placed in the ghost shrimp tank, they comfortably live under bright light and low light. They are also commonly found in areas with huge amounts of underwater vegetation.

Ghost shrimp do not have a very long lifespan. The female ghost shrimp can live from a few days to one year depending on their habitat and what they eat. On very rare occasions, ghost shrimp live for a little over a year. Most of them including the Amano shrimp die as a result of the stress that encounters from being brought to the house from the store.

Others also experience sudden death as a result of a lack of proper care. This is because they are often used as feeders for larger species of fish hence, they are always kept in waters with poor filtration.

4. What Do Ghost Shrimp Eat? 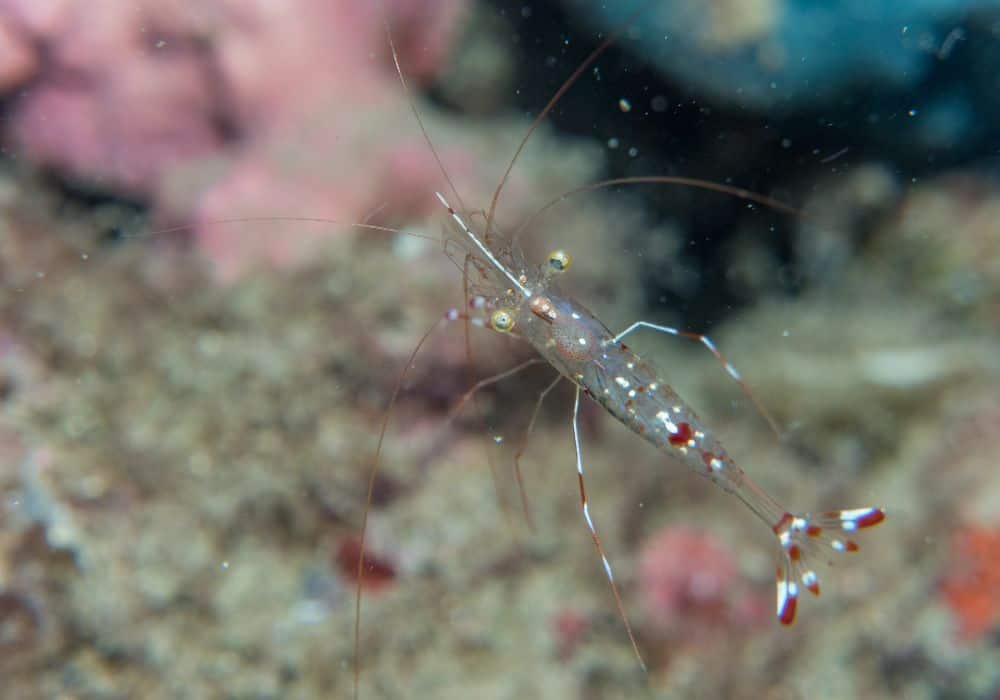 The overall well-being of ghost shrimp solely relies on what you feed them.  Ghost shrimp are omnivores and can feed on different types of food. Ghost shrimp eat fish, snails, molt, fries, weeds, insect larvae, fish poop, and plant matter based on their habitat. Generally, ghost shrimp are capable of feeding on anything smaller than themselves.

Now, let’s take a look at what some species of ghost shrimp-like baby shrimp, wild ghost shrimp, and shrimp in the aquarium eat.

Wild ghost shrimp are mostly found in lakes of North America and freshwater rivers. They live in the wild and mostly feed on plants. Let it be known that they do not feed on anyhow plants but prefer to be fed detritus (pieces of dead plants). In case of food scarcity, you’ll find wild shrimp feeding on live plants.

Aside from plants, wild ghost shrimp also feed on algae. This can be found on hard surfaces and is gathered as shrimp move by. When there is a scarcity of plants and algae, wild shrimps will feed on anything so far it is smaller than their mouth and will perfectly fit in.

Ghost shrimp in aquariums is the specie in a habitat closest to their natural environment. They have to be comfortable in the aquarium for them to be able to feed properly. The tank used as an aquarium should be placed very close to its natural habitat to avoid a hunger strike.

They feed on varieties of diets that are high in oil. Ghost shrimp in aquariums can feed on fatty food without any form of difficulty. Also, feed them food that is high in protein when they are growing. Once they’ve reached maturity, you can tune down the protein in their food a little bit.

Ghost shrimp in aquariums also need calcium supplements to help them form a strong shell. This will help protect them from harsh conditions that may arise in their habitat as well as other fishes.

Baby ghost shrimp have a diet different from what other species of ghost shrimp eat. They are always very small and can only feed on food way smaller than their mouth. What you feed them determines how healthy and fast they grow. These larvae can eat food like little plant debris and algae without help from anyone.

Get foods that are specifically designed for baby shrimp. Such foods are meant to satisfy their cravings and also lead them from hatching to maturity. Such foods come in form of a powder and can be easily sprinkled in the tank where baby ghost shrimp are kept. The larvae are fully mature after five weeks and will be able to feed on adult food.

Always mix up the diet of ghost shrimp regardless of their specie. This will make them enjoy varieties and provide them with different nutrients to sustain their growth and general well-being. 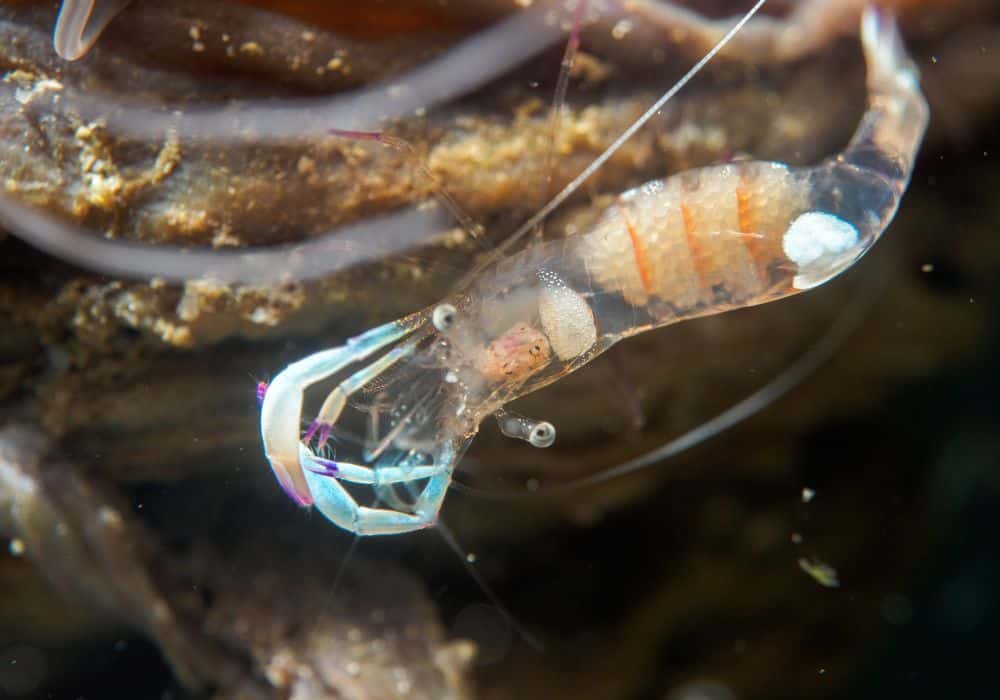 5. How much do ghost shrimp eat?

6. How often do ghost shrimp eat?

Ghost shrimp do not have a strict feeding routine. They feed based on the availability of food and can wander around for a long time before finding food. Since algae are their favorite food and very common, you’ll always find ghost shrimp feeding on algae.

Provide food for them daily but ensure that they consume it all within four hours. Also, check for uneaten food and remove them to prevent ghost shrimp from eating a lot. They are scavengers and there is no laid down rule as to how much and how often they eat.

7. What not to feed the ghost shrimp?

Do not add food that contains copper and any other metal to your shrimp tank. This can be very dangerous to ghost shrimp as shrimps are very sensitive t copper and may die as a result of consuming it.

Any other metal aside from copper should be given to them in low quantity (if need be) as adding a large amount can be toxic to ghost shrimp. It is advisable to keep copper and any other metal out of your ghost shrimp’s diet.

Also, if your ghost shrimp are acting as a feeder specie, do not feed them with processed foods that contain lots of preservatives. Ghost shrimp prefers to stay in a healthy habitat, so being in a dirty tank for too long can also be dangerous to them.

This is because ghost shrimp drink out of the water in the tank so a dirty tank will do them no good. Change the tank water gradually and replace at most 30 percent water at one time. This will prevent the shrimp from going into shock.

Ghost shrimps are amazing creatures with transparent bodies and lots of tactics. They are always super active day and night browsing through substrate or feeding on dirt wood and plants. They also help clean your tank and serve as feeders to other bigger fish.

These creatures are easy to care for. With the right effort, great setup, and just a little care, your tank will be full of lots of ghost shrimp as they breed a lot.