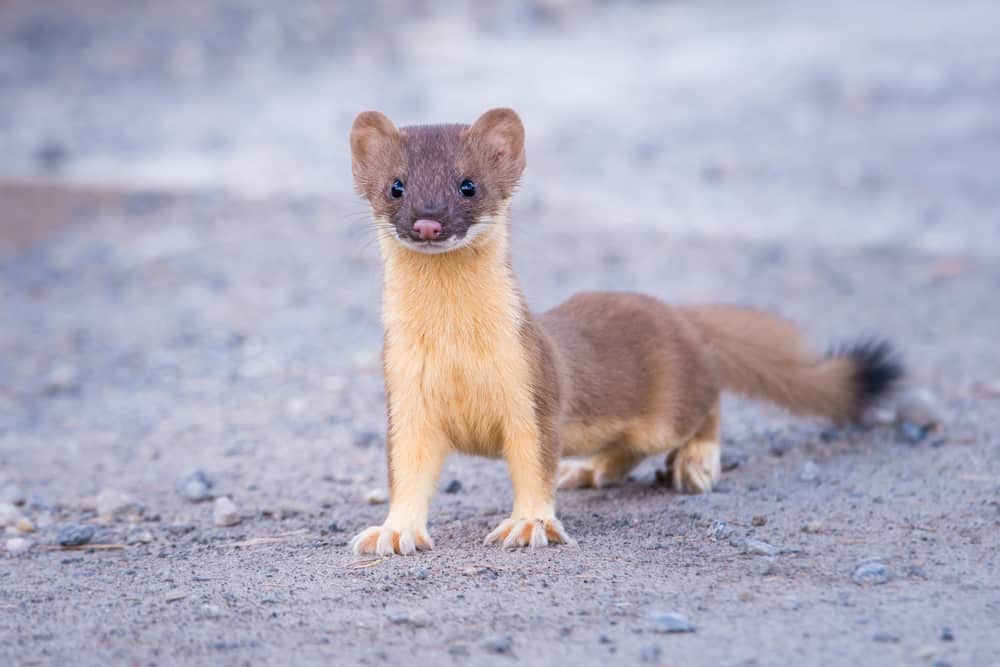 Weasels are tiny mammals that are found in North America, Europe and Asia. They are the smallest member of the Mustelid family, with other members of that particular family including badgers, otters, wolverines and ferrets.

Despite their small size, they are still predators. In fact, they are the smallest carnivorous mammal in the United Kingdom meaning their diet largely consists of other tiny mammals living within their vicinity. In this article, we are going to look at their diet in more depth, as well as let you in on some cool facts about these tiny creatures.

As we have already touched on, there is a lot more than meets the eye when it comes to weasels. The average male weasel is around 22cm in length with a tail of 6.5cm. Females on the other hand are roughly 7cm smaller and have a tail of just 4.5cm. Males are also the heavier of the species, weighing approximately double (115g) the weight of the females (59g).

Please bear in mind these length and weight dimensions when you take into account what we’re about to say: Weasels eat 40-60% of their body weight each and every day, meaning they are on a constant search for food whenever they are awake.

To put that into perspective, the average male in the United Kingdom weighs 84kg, meaning it would be like one of them eating between 33-50kg each day. The metabolism of weasels is therefore insane.

Another remarkable fact concerning their size is the fact that they are so slender and streamlined. This streamlined body can help them to nip around forests to hunt prey – more on that later.

Moving on from their size now, and time to look at their fur. Depending on the time of year, a weasel’s fur will change as they adapt to their surroundings. During the majority of the year, they have light brown fur but during the autumn months, they shed their skin, changing to a white coat to fit in with the snowy conditions of winter.

Weasels are nocturnal and don’t usually come out of their burrows while the sun is out. On the topic of their burrows, unlike many other small woodland mammals, weasels don’t create these burrows themselves. Instead, they use their small bodies to infiltrate the homes of other mammals, usually the ones which they have just killed and eaten.

Once in a burrow of their own, they will typically start reproducing to build a family (known as a colony). Female weasels will have one or two litters per year with each litter containing around 15 offspring (known as kits).

What do weasels eat?

Now that you know more about the characteristics of these fascinating little carnivores, it’s time to look at what types of food they actually eat. Considering they are so small, it’s hard to imagine that they can hunt and eat anything too substantial. However, given that they have to eat 40-60% of their body weight each day, they simply have no choice in the matter.

Weasels aren’t particularly fussy when it comes to feeding and will eat most small animals in their surrounding area. On the whole, they are strictly carnivorous meaning they don’t eat any plants or fruit from the forest floor.

Their diet consists of the following animals:

As you can see, their diet really does cover a wide variety of animals, displaying just how adaptable these animals can be. This un-fussy approach means that they can live just about anywhere, changing their target prey depending on the surrounding area and what’s available.

Although they aren’t fussy when it comes to the animal type, they are fussy about the state the animal is in when they eat it. They prefer their prey to be alive when they hunt, and will only eat dead animal carcasses as an absolute last resort.

Due to their interest in rodents, and their easy-going nature when it comes to prey, they are sometimes drafted in by pest control to deal with certain pests such as mice and rats.

How do weasels hunt?

Considering their size, you would expect weasels to hunt in packs to maximize their potential. However, they actually prefer to hunt alone, waiting for no one as they aim for their ten meals each day. The only time you will see more than one weasel hunting together is if a Mother is taking a young kit with them for training purposes.

In terms of hunting techniques, weasels utilize all of their best assets. One of these assets is their strong sense of smell. You will often see a weasel swaying its head from side to side – this is them picking up the scent of their prey from a distance.

Their excellent sense of smell doesn’t take away from their other senses either. Their eyesight is very sharp and they can hear a pin drop. They make the most of all of their senses by standing on their back two legs when hunting to scan prey from a distance, before using their speed to pounce on anything nearby.

As well as hunting across the ground, weasels are also capable hunters underground. As mentioned earlier, they are known to ‘steal’ the burrows of their victims using their slender bodies to sneak through gaps to attack the home of mice, rats and rabbits.

In terms of how they physically take down animals the same size as them, or even ones bigger than them, their biggest asset is their sharp teeth and aggressive nature.

Once they’ve engaged with prey, they will clamp down with their teeth onto the necks or skulls of said prey. They will relentlessly keep biting on these sensitive body parts until their prey is dead, using their legs to hold their dinner in place.

When it comes to killing birds, they use their impressive leap to take the birds by surprise and then follow the same techniques explained above to get the kill.

What are the predators of weasels?

Despite the fact that weasels clearly punch above their weight when it comes to hunting, they do also of course have predators who can get the better of them. While they enjoy success against almost all animals of a similar size to them, some larger animals do enjoy snacking on weasels.

Their biggest predators by far are large birds such as hawks and owls. They use their birds-eye-view advantage to swoop down and attack weasels before they even have the chance to realize what’s going on. The sheer size advantage that these large birds have over weasels means there is only one winner once they have engaged.

On the ground level, weasels are often eaten by foxes and coyotes, who again just use their size advantage to overpower them. Interestingly enough, foxes hunt and attack in much the same way as weasels do just on a larger scale.

Finally, domesticated animals such as cats and dogs are known to be fond of weasels if they venture onto their property. Due to this, farmers are more than happy to buy a cat/dog to deter weasels from interfering with their stock.

Are weasels good to have around?

Weasels are potentially good to have around if you have a pest issue. As mentioned earlier, pest control services often use them to sniff out mice and rats and other unwanted rodents. So, in that sense, they can be great to have around the place.

On the other hand, weasels themselves can sometimes behave like pests. Farmers have a real issue with weasels since they sometimes attack and kill hens and chickens. So, if you live on a farm with livestock then weasels absolutely are not good to have around!

One thing worth mentioning is that if there are weasels around you then you have nothing to worry about from a health and wellbeing perspective. They are completely harmless to humans and will likely stay well away from you.

They may well have a nip back at domesticated cats/dogs that attack them but they are very unlikely to do any substantial damage to them either.

To conclude, weasels have an incredibly varied diet ranging from mice to lizards and everything in between. While they are strong predators, their size is ultimately their downfall with larger animals being able to pick them off with ease. Nevertheless, they are intriguing little characters that are well worth looking out for next time you’re on a walk through a forest or woods.