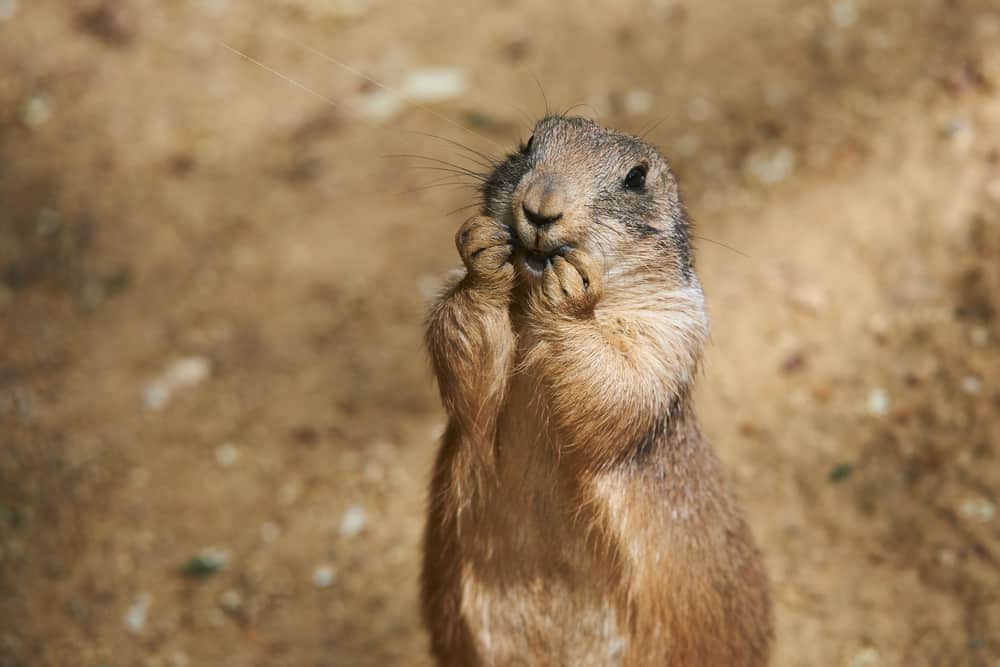 If you’ve ever walked around a large grassland area and found some strange tunnels with wide entrances, you’ve probably come across a colony of prairie dogs. Despite their peculiar name, prairie dogs are much closer to squirrels than actual canines.

These cute little rodents mostly live in the wild, but you can also find them as pets. They play a significant part in the balance of their ecosystem because of their tunnels and diet. So, what do prairie dogs eat?

In this article, we’ll thoroughly examine the habitats and dietary requirements of prairie dogs, as well as who their predators are and what you should avoid feeding them.

Keep on reading to learn more about what foods are best for prairie dogs!

Prairie dogs are small mammals belonging to the family of ground squirrels (Sciuridae). Within their genus (Cynomys), there are five different species of them that are all native to the grasslands of North America. In fact, prairie dogs’ habitats can be found in southern Canada, throughout the Great Plains, and in northern Mexico.

Since the habitats of prairie dogs are often exposed to environmental threats, prairie dogs prefer to create underground burrows to live in. These mounds can be up to 30 ft long and 10 ft deep, with up to six entrances. These burrow entrances are usually elevated to 3ft to prevent flooding.

Prairie dogs are one of the most highly social animals on the planet. They usually live in families that consist of one male adult, two to three adult females, and their offspring. Several families live together in colonies called coteries. These prairie dog towns can sometimes consist of more than 20 different families.

Prairie dogs significantly impact their ecosystem, so much so that they are considered a keystone species. They play a vital part in the food chain since they are herbivores and many other animals prey on them. Also, their mounds are often used for shelter and protection by other animals, such as burrowing owls and the golden-mantled ground squirrel.

Prairie dogs are also excellent “farmers”. Their constant digging ensures that the top layers of soil are always rich in minerals and nutrients, which is very important for agriculture. Unfortunately, most people view them as pests and try to eliminate them, causing significant damage to farming and livestock.

What Do Prairie Dogs Eat?

Prairie dogs are primarily herbivorous mammals, which means they rely on vegetation for most of their diet. However, if they can’t find a proper amount of grass or vegetables, they will also occasionally eat some species of insects.

Since their diet significantly relies on vegetation, it can change throughout the year. During spring and summer, they have an abundance of food and usually eat their preferred types of grass or seeds.

In the fall, they switch to eating broadleaf forbs. Once the winter comes, and grass no longer grows, prairie dogs will incorporate more seeds and insects into their diet. Also, prairie dogs tend to eat more and put on weight to prepare for the cold winter months, as most don’t hibernate.

Different species of prairie dogs also exhibit unique diet choices based on what they can find in their ecosystem. Also, while prairie dogs do not usually display aggression, the White-tailed prairie dog is known to kill ground squirrels because they are its food competitors.

The babies of prairie dogs drink milk from their mother for the first few months of their life. That’s why adult female prairie dogs often supplement their diet with snow during the winter to ensure they are properly hydrated. After that, the pups usually begin to learn how to find food themselves.

What Do Prairie Dogs Eat in Captivity?

Over the past few years, harvesting wild prairie dogs to domesticate as pets has become very popular. In captivity, the dietary needs of a prairie dog do not change significantly, although they need constant monitoring to avoid becoming overweight.

The bulk of their diet consists of grass hay and rabbit pellets. Naturally, they also require a healthy amount of vegetables. Some good options include some kinds of lettuce, kale, fresh herbs like cilantro and parsley, or any other leafy green vegetable. You can occasionally give them fresh fruit as a treat, but remember that the high sugar content of fruit can lead to obesity. 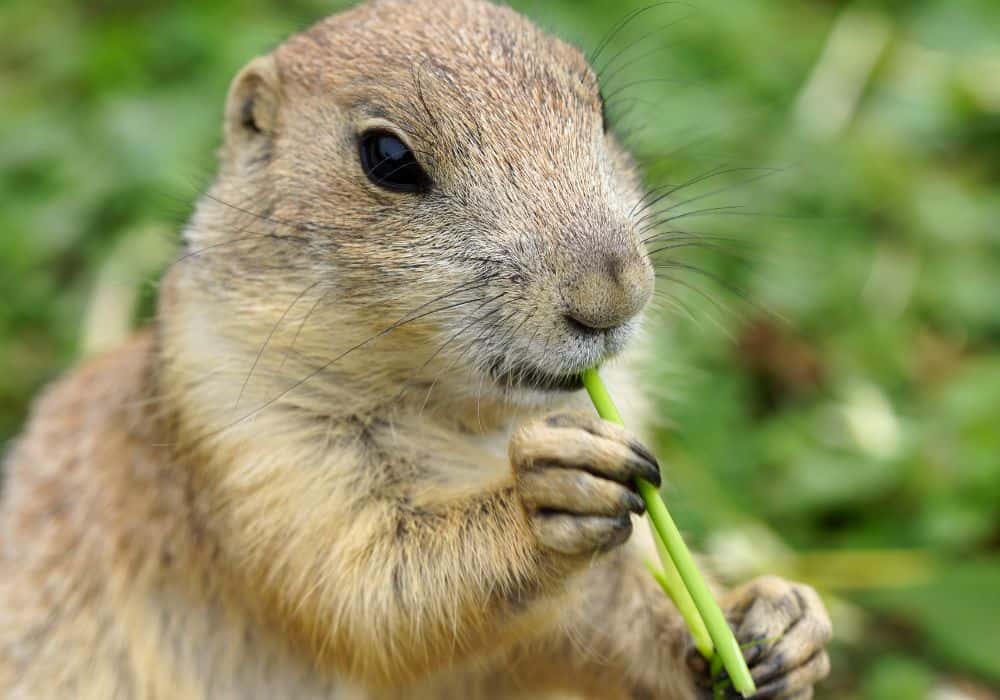 How Often and How Much Do They Eat?

Prairie dogs have evolved to be very energy efficient and survive with very scarce resources. In fact, during the winter, when food is low, prairie dogs often use deep sleep to save energy. This way, they can go for many days without food. However, during the spring and summer, their food is abundant, making them more active.

When dealing with pet prairie dogs, you must remember that they are way less active at home than in the wilderness. Therefore, you should be very careful with how much you feed them, particularly when it comes to foods that are not in their basic diet.

You should always have plenty of fresh hay for your prairie dogs to eat. Since they are selective herbivores, they will only eat the nutritional part of the hay and leave you with a lot of waste which you should clean daily.

Other than hay, you can feed small quantities of pellets to your prairie dogs, along with high-protein foods such as mealworms. You should also make sure your pet prairie dog eats a healthy amount of fresh fruit and vegetables.

As we mentioned before, prairie dogs are considered keystone species in most of their ecosystems. This means that their effect is disproportionately high relative to their abundance. Several animals prey on prairie dogs in the wild. Some of the most important ones are:

A significant predator-prey relationship is that between the black-footed ferret and prairie dogs. This specific type of ferret relies almost exclusively on prairie dogs for food. The constant reduction in prairie dog populations due to human activity has made these already rare species almost extinct.

Other animals heavily utilize the tunnels that prairie dogs make for shelter or nesting. The most common ones are the burrowing owl and rattlesnakes. Nonetheless, the biggest enemy of prairie dogs is humans.

Humans often identify prairie dogs as pests and look to eradicate them from their farming properties. Prairie dogs are harmful to crops since they completely remove vegetation around the spots where they dig their tunnels. Other concerns include potential damage to horses and their susceptibility to diseases like the sylvatic plague and the bubonic plague.

The constant urban development, as well as the direct removal by farmers, has led to significant reductions in the population of prairie dogs. While there are some concerns about their presence near humans and livestock, these mammals are also very beneficial to farmers, as they prevent the undesirable spread of brush, which has a big effect on the livestock range.

What Should You Not Feed a Prairie Dog?

Since prairie dogs have specific nutritional requirements, you should be diligent about their diet. You should always follow your veterinarian’s instructions and feed them the suitable types and proper amounts of food. Various kinds of food are unhealthy and even toxic for prairie dogs.

People often provide wood branches or plastic items for their prairie dogs to chew on to maintain healthy teeth. However, these can actually cause dental harm to your pet instead. Also, they might chew off some piece of wood or plastic and have digestion issues. You should let your prairie dogs maintain their teeth themselves by chewing on the hay.

Prairie dogs are a unique type of animal with significant importance to their ecosystem. Its ability to maintain the richness of the ground in minerals and nutrients is unparalleled.

Additionally, they are herbivores and have several predators, making them an essential link in the food chain. Nevertheless, human intervention has caused their populations to diminish considerably.

If you have a pet prairie dog, remember that life in captivity is very different from the wilderness. You should ensure your pet follows a strict and balanced diet to live longer. Also, once it starts growing old, your pet will need changes to its diet, so consider asking for advice from your veterinarian.