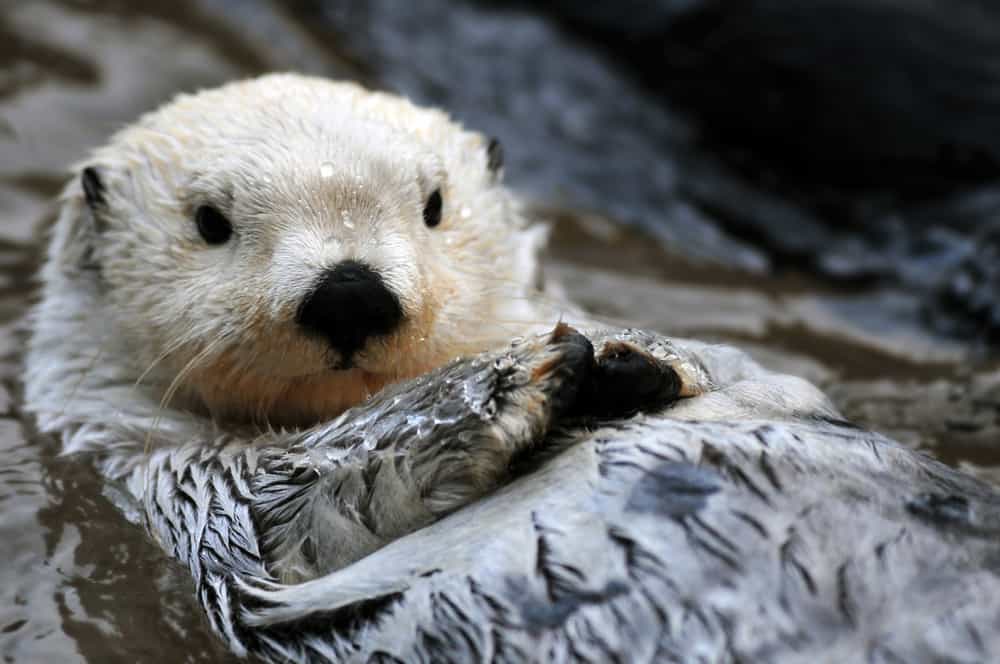 Sea otters are adorable marine mammals, but do you know much about them? Where do these fuzzy creatures hunt? What do sea otters eat?

We had to learn more about these playful critters, so we’ve put together a comprehensive guide on sea otters and their marine diet below. Let’s learn about the sea otter’s habitat, physique, hunting and eating habits, and more.

Sea otters are long, furry mammals that spend most of their life in the sea – they even give birth in the water! Newborn sea otters are called pups. Pups are usually 22-24 inches long with a body weight of up to 5 pounds each.

Adult females will weigh about 45 pounds, while males will have a body weight of up to 65 pounds. Both male and female sea otters grow to be around 4 feet long. Some species of the sea otter, such as those found in Alaska, will grow even larger than this.

Sea otters have a thick snout with whiskers, webbed back feet, and paws with retractable claws. Their body shape helps them move in the water, especially during diving. Their muscular tail also helps them navigate as they swim and dive.

Sea otters have naturally flattened molars which help them crush their food. Their fur is dark brown to reddish-brown. It provides a thick layer to help maintain a sea otter’s body heat in the cold ocean waters.

While they are known for being cute, sea otters are also highly intelligent creatures. Some otters will wrap themselves in kelp forests to avoid floating away. They can also be found linking together to create a floating otter group for comfort and protection.

Additionally, they all use effective hunting techniques – including tools – to capture, open, and eat their prey. They have an excellent ability to locate food after a deep dive, which we’ll talk about in more detail further below.

When they’re not hunting or eating, sea otters spend many hours grooming their fur. Since they don’t have a layer of blubber like other marine mammals, they must groom their layer of fur to maintain their body heat and stay water-resistant.

Some otter species are known to be social while others, like the Southern sea otter, will prefer to live alone unless congregating in an area with plenty of food.

About 90% of sea otters are found in the Bering Sea along the coast of Alaska. Sea otters in Alaska are bigger than the Californian Southern sea otter subspecies.

Many sea otters also live in the Northern Pacific Ocean, near states like California and Washington. In California, they range from northern San Mateo County to the southern coasts of Santa Barbara County.

The coastal waters they call home are in both cold and temperate areas. Luckily, the thick fur of a sea otter provides a warm layer for its body, as it has anywhere between 350,000 to 1 million hairs per square inch. To compare, cats have only 60,000 to 120,000 hairs per square inch on their bodies. Hot air is trapped between the fur and the skin, helping the otters regulate their temperature as they swim.

While they sometimes rest on rocky shores, sea otters prefer to be in or on waters with muddy bottoms, including those with kelp forests. They tend to stick to areas of depths less than 130 feet and an average water temperature between 35℉ and 60℉.

Female pups reach maturity at three years old and can live to be up to 20 years old. Males mature at five or six years old and live up to 15 years. Pairs usually undergo mating in winter or spring. They have an average gestation period of six months, although it can be anywhere from 4-12 months depending on the fertilization period and the type of otter species.

What Do Sea Otters Eat?

Sea otters love and eat much of the seafood that humans do, especially shellfish. All subspecies of sea otters combined eat roughly 40 types of marine animals, with much overlap.

Sea otters will also take advantage of the seasons and eat more of particular prey when it’s seasonally abundant.

While they can eat plants – especially in captivity – sea otters are primarily carnivores. Their main foods are marine invertebrates, which are soft-bodied animals without a hard skeleton. Many of these have an outer skeleton instead, such as the shells on clams.

Sea otters have a high metabolic rate that is twice as fast as most other terrestrial animals. This causes them to eat up to 25% of their body weight in food each day.  This equals between 5,000 and 6,000 pounds of food per year!

Their diet and predation make sea otters a keystone species. This is a species that helps maintain the ecosystem’s equilibrium. For example, sea otters in California control the sea urchin population which, in turn, prevents the overgrazing of kelp forests.

What Do Baby Sea Otters Eat?

The sea otter diet for pups begins with the mother’s milk. Pups rely on this milk during the first month and a half of their lives. If a mother has twins, she will likely abandon one, since she does not have enough milk or energy to care for two pups at a time.

Pup fur is so dense that when they’re young, they cannot physically dive. Instead, they spend most of their time floating on the ocean surface near their mother’s milk supply.

After around forty days of drinking milk, a pup can begin to eat small fish, shrimps, scallops, and mussels. Their mothers may bring them food but by the time they’re two months old, the pups will begin to forage themselves.

Since most of the sea otter diet comes from shellfish, sea otters have learned to use tools to open up the shells of their prey. They will use rocks to break open the hard shell once they’re on the water’s surface.

Sea otters are commonly photographed while floating belly-up in the sea. In this position, they’ll place their prey on their chest while pounding on it with a rock. This protects their meal from being stolen in the water and also provides a “table” for them as they eat.

When it’s finished, the otter will roll around in the water to clean any leftovers off of its fur.

Many studies have also shown that sea otters develop individualized preferences when it comes to their diet, so one sea otter could favorite different mollusks than others.

How Do Sea Otters Hunt?

Most sea otter prey is found on the bottom of the sea. To reach their food, otters use their webbed feet and strong tail for diving. Sea otters can dive up to 250 feet to find their food, although most foraging is done at depths of about 60 feet. Most dives will last around two minutes, but a sea otter can hold its breath for up to five.

Their cute whiskers aren’t for show – they are so sensitive that they can detect vibrations and movement in the water. The otters use this ability to locate small prey once they are underwater, especially prey hiding in murky water, sand, or mud.

The sea otter doesn’t go diving alone; many times, it also brings a carefully-selected stone to the ocean floor. This stone helps it dislodge prey so that it can bring it back up to the surface to eat.

Sea otters are intelligent and voracious marine mammals. They’re crafty creatures who use their intelligence for strategic hunting and foraging. By using tools like rocks, they can break their prey free from the ocean floor and then smash it open on the water’s surface.

They love to eat shellfish, octopus, squid, sea urchins, and snails. Because of their high metabolic rate, sea otters must devour up to 25% of their body weight in food every day. The rest of their time is spent resting or grooming the layer of fur that protects their vital body heat.

Some sea otters eat octopus, but this meal is not as common as the other mollusks they favorite. Northern sea otters tend to go after the giant Pacific octopus, while other otter species eat red octopus.

Sea otters in captivity have been seen eating fruit, including things like berries and grapes. While you may see it at a marine sanctuary or the zoo, fruit is not a food that’s naturally found in the sea otter’s ocean habitat.

What Do Sea Otters Like to Eat the Most?

The favorite food of most sea otters is shellfish, including crustaceans and mollusks. You can often find them munching on crabs, mussels, clams, abalones, and scallops.

Sea otters have also been observed as having diet preferences, which means each otter may have a different favorite meal.