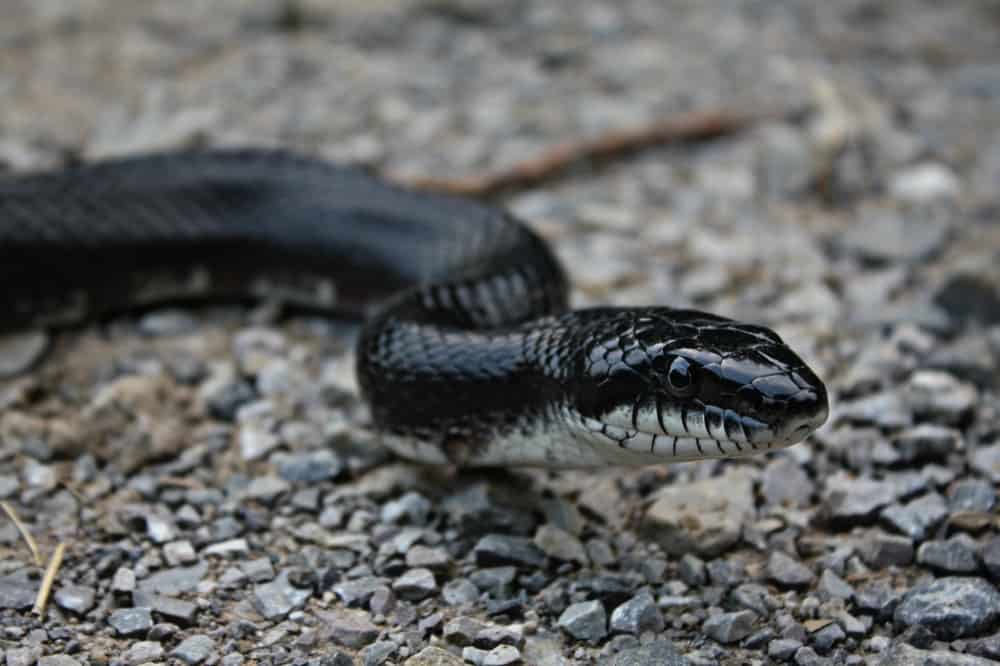 So, a common question many people ask is what do black snakes eat, quickly followed by inquiries such as – are they dangerous, how to get rid of them, and so on. So, let’s try to shed some light on all these questions and more below.

Like all snakes, these North American rat snakes are natural-born predators. As a typical constrictor snake, these reptiles are actually non-venomous snakes, meaning that their bite is technically harmless to humans aside from the momentary pain it can inflict.

Black snakes are far from harmless to their prey, however. Favoring small mammals, birds, reptiles, and eggs like most other snakes, black snakes utilize their skills as excellent climbers, their powerful bodies, and impressive (for a snake) endurance to travel great distances and reach their prey wherever it’s hiding. Black snakes can also swim when necessary allowing them to hunt frogs, amphibians, and potentially the occasional fish, although the latter is way too rare to be counted as a regular part of their diet.

Despite all those impressive abilities, black snakes are opportunistic hunters and prefer grounded prey when they can get it. So, if you see a black rat snake climbing on a tree – while not an astonishing and rare sight – it means that the snake is quite hungry and hasn’t found any grounded prey to feed upon.

What’s more, even though, as constrictor snakes, they are excellent hunters, the black snakes’ opportunism extends so far that they purposefully look for bird eggs rather than adult prey. Why chase a rat around when a couple of eggs can keep you full for weeks?

And this is another advantage black snakes have – they don’t need to eat all that often. That’s typically true for most snakes and reptiles – their cold-blooded bodies force them to conserve energy and only hunt when necessary. So, an adult black snake can comfortably go on for a few weeks and up to a month without feeling the need to hunt with juveniles hunting once a week until they are fully grown.

Black rat snakes will typically have mostly black scales at the top, as their name implies. Their bellies can be white or grayish, however, and they will also have a white chin. When they are younger – or hatchlings – black snakes are actually light gray in color and just have some black blotches on their backs.

The typical length of an adult black snake is around 3 to 6, sometimes 8 feet or 2.4 meters which is pretty large for most snakes but about medium for a constrictor. They are considered a very strong constrictor, however, especially for their size. In fact, black rat snakes are considered one of the largest snakes you can encounter in developed and suburban areas in the US.

These snakes are considered native to most of the Central and Eastern United States – pretty much everywhere from Texas to the East and North-East. In those states, however, black snakes can be found in a large variety of habitats thanks to how adaptable they are. These constrictors can easily survive in dry or grassy flatlands, farmlands, suburban environments, rocky hillsides and mountains, as well as wetter flatlands.

All this is thanks to their impressive physical traits – their climbing and swimming capabilities, long-distance endurance, and overall size and strength.

Still, black rat snakes are not at the top of most food chains they are a part of, so they tend to avoid environments that are full of some of their natural predators.

Like most other snake species, black snake males and females perform their mating rituals in the spring and lay their eggs around May, June, or July. Their nests are usually found under rotting vegetation, under rocks, in logs and stumps, or in manure piles. Each snake will usually lay somewhere between 10 and 14 eggs at a time.

The eggs that survive the noses of other predators will typically hatch in August or September. From there, the hatchling quickly starts to grow and reaches full maturity after about 4 years. Around that age, most black snakes will be about 5 feet long. They do continue to grow with age too but at a slower pace.

Overall, black snakes typically live somewhere between 10 and 15 years in the wild, potentially a bit more in captivity with good care. 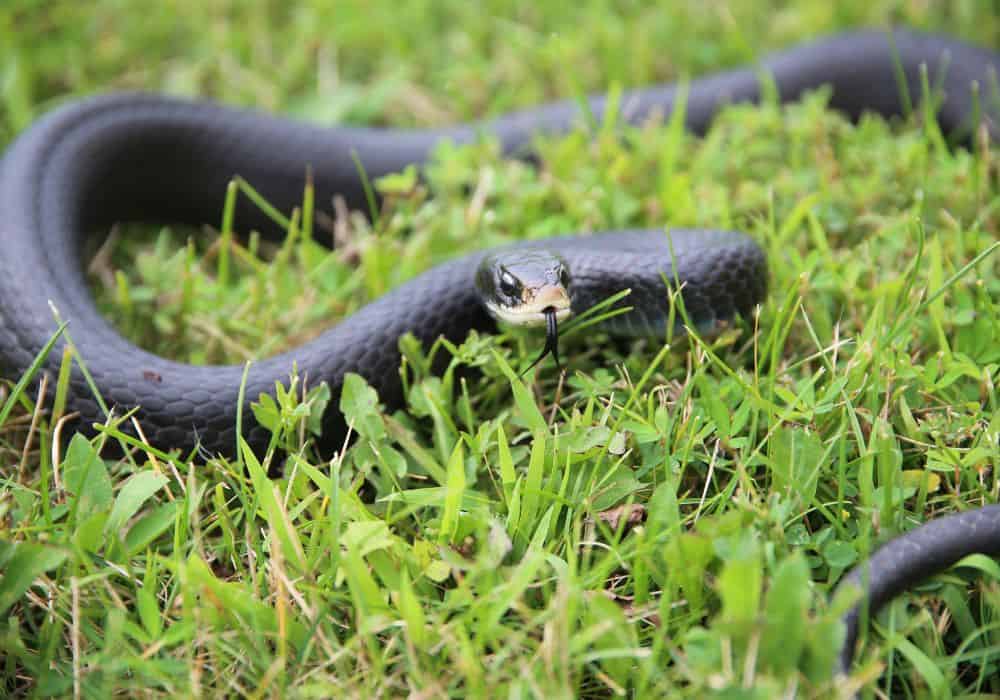 Due to their common color and a rather unspecific name, black constrictor rat snakes are often confused with many other snake species. Some of the prime examples of that are:

What do black snakes eat? 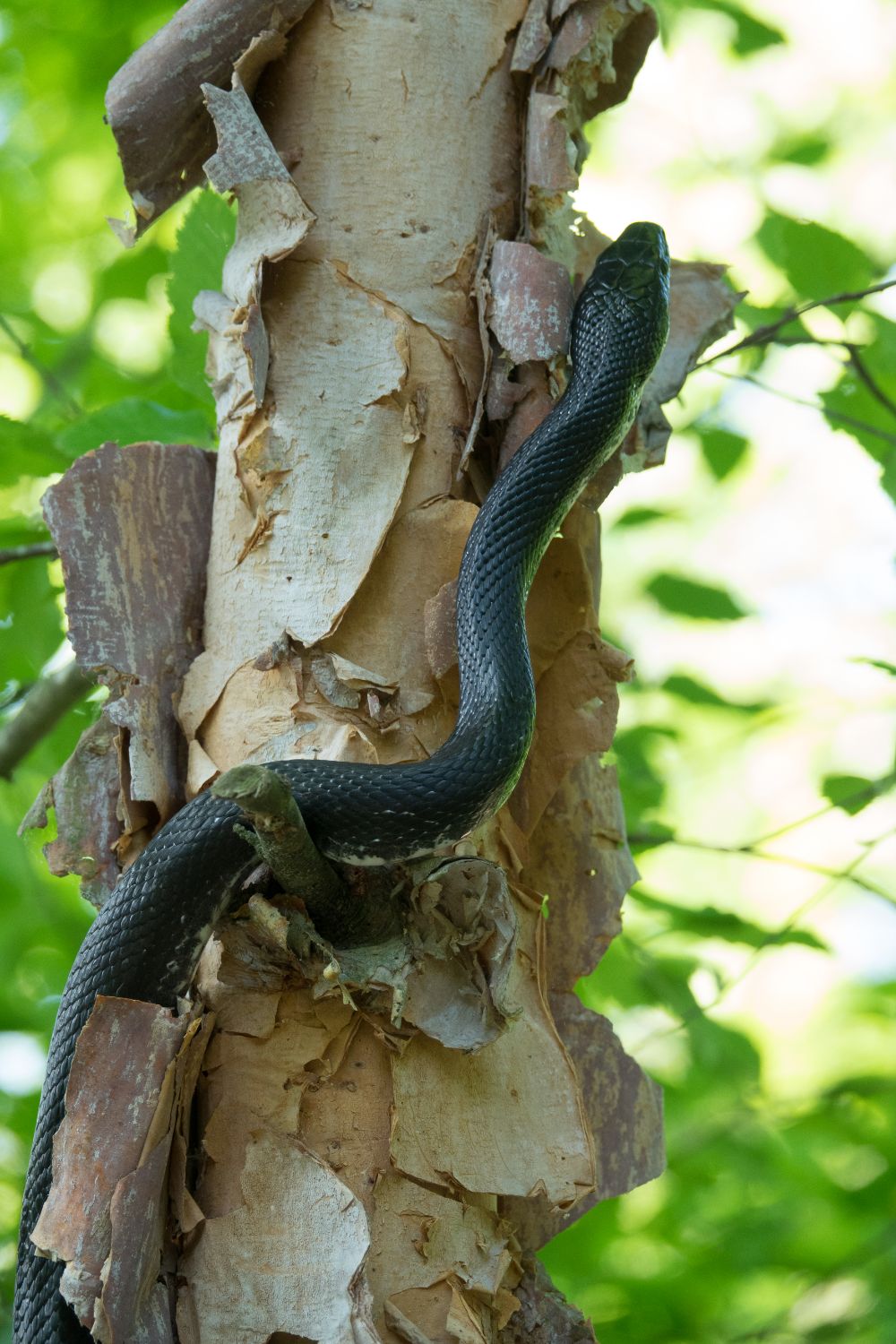 Given their nature as opportunistic hunters, black snakes can prey on almost all wildlife that’s small and safe enough for them to eat. Black snakes are not as big as other constrictors, after all, so they are incapable of going for the large prey most pythons do, for example. So, their diet mostly consists of the following:

There are some occasional exceptions, however, such as an unfortunate fish that got too close to the black snake. Most of the time, however, these reptiles will go for eggs, grounded birds, and small mammals such as mice and rats, hence their name – black rat snake.

What to feed your black snake pet?

Aside from being widespread in the East US, black rat snakes are also incredibly common pets. There are numerous reasons for this:

So, what do most peoples feed this common pet? As with most other pet snakes, you are supposed to feed them food that’s as close to their natural diet as possible. So, this usually means bab

y chicks, mice, and rats, as those are the easiest prey to get.

Do note that captive snakes should be fed pre-killed prey, however, as even a simple mouse can scratch your snake’s eye or nose. Of course, that’s not lethal damage but there is no point in getting your snake maimed for no reason.

Many people think that they need to feed their snakes live prey to stimulate it and “make it happy” but that’s not necessary. Like most other reptiles, black snakes are not just opportunistic hunters but they easily go as far as to happily don’t hunt if they don’t need to. Remember, snakes are cold-blooded reptiles – it’s their strongest instinct to conserve energy and go for the easiest prey they can as long as it’s suitably nutritious.

So, dropping a pre-killed mouse or chick in your black rat snake’s tank is all you need to do. If anything, if you want to socialize and safely handle your pet snake, teaching it not to associate live warm-blooded creatures as prey is a great idea.

What are the black snake’s natural predators? 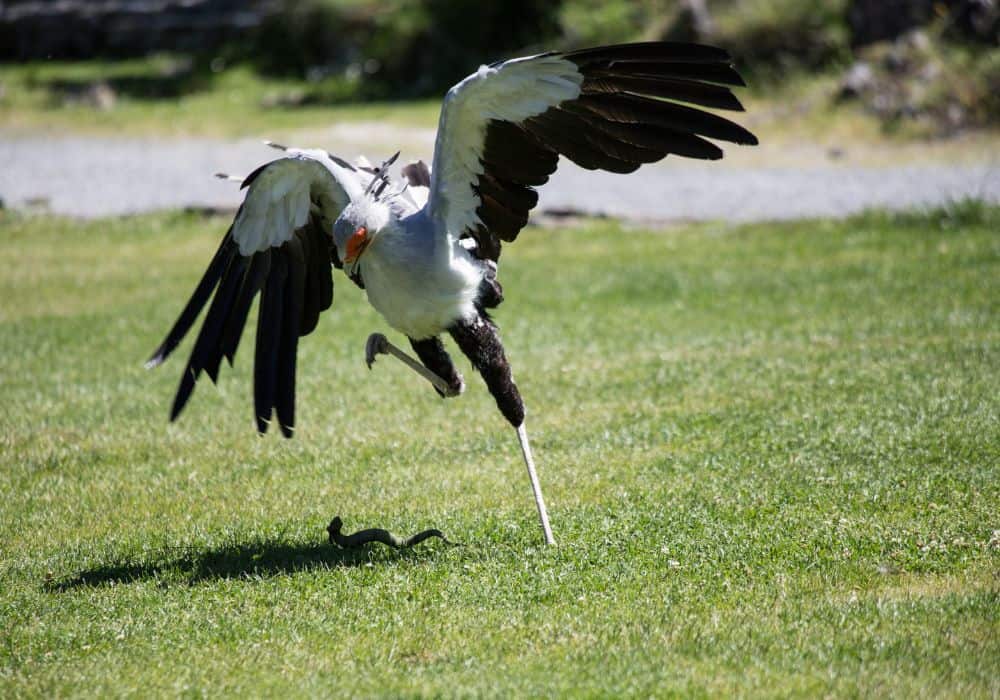 As with all other small or moderate size snakes, the bane of a black rat snake’s existence are birds of prey. Despite being as long as 6 or even 8 feet, a rat snake is still no match for a large eagle or even most hawks. Their most common predator in the environments they live in is probably the red-tailed hawk but they can also fall prey to land-based mammals such as foxes and raccoons that are big, smart, strong, and agile enough to take down this constrictor. So, a list of the black snake’s five most common predators would look like this:

We would put humans there too as people are one of the most common killers of black rat snakes but we rarely do that out of predation.

The typical defense mechanisms black rat snakes employ to survive being preyed upon are three: 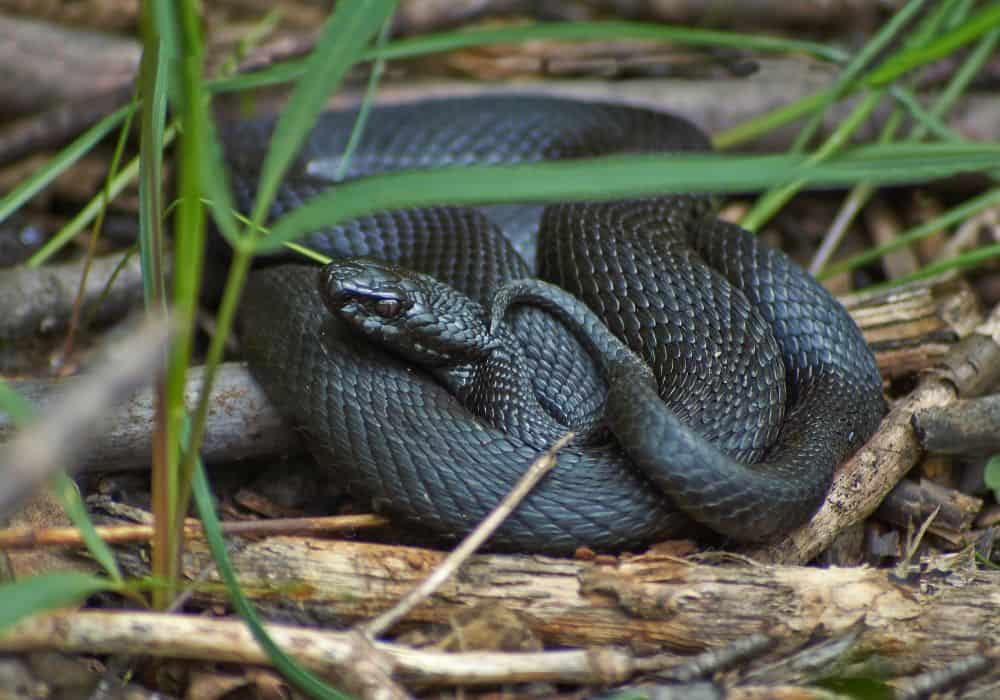 The biggest myth you’ll hear about black snakes is that they are dangerous pests. Thanks to often being confused for rattlesnake and copperheads by common people, black snakes are frequently killed and driven out of suburban areas and farmlands by homeowners and farmers. It’s not uncommon for people to call pest control for black rat snakes too.

Is this necessary? There are conflicting opinions about that.

Are black snakes any danger to humans?

Black snakes are neither venomous nor large and powerful enough to be a danger to humans. Theoretically speaking, a very small toddler can fall victim to a large adult black snake but such a scenario requires a lot of variables to align – the toddler must be left unattended for a very long period of time for the snake to feel safe and comfortable approaching it, there should be no other smaller and easier prey around, etc.

So, by and large, black rat snakes are not a danger to humans. They can be problematic for our pets, however, especially small dogs and cats. Unlike newborn babies, dogs and cats are often left to roam around, run with no leash, or just play in the yard unsupervised for hours at a time. This does make them potential prey for rat snakes and homeowners would be justified to not want such reptiles around for this reason.

At the same time, however, black rat snakes are very good for farmers themselves as they feed on many of the pests farmers despise such as mice, rats, and voles. So, in most cases, a farmer should welcome the presence of rat snakes on their farmland as that’s basically free and harmless pest control.

The exceptions to that would be that:

How to keep black snakes away from the house?

The easiest way to keep black snakes away from your home is to remove any incentive for them to come close. This means:

Black snakes are fascinating reptiles and wonderful pets. They can be seen as nuisance by pet owners and farmers raising chickens but, aside from that, they are not dangerous and are even beneficial for most environments as they hunt pests such as rats and mice.