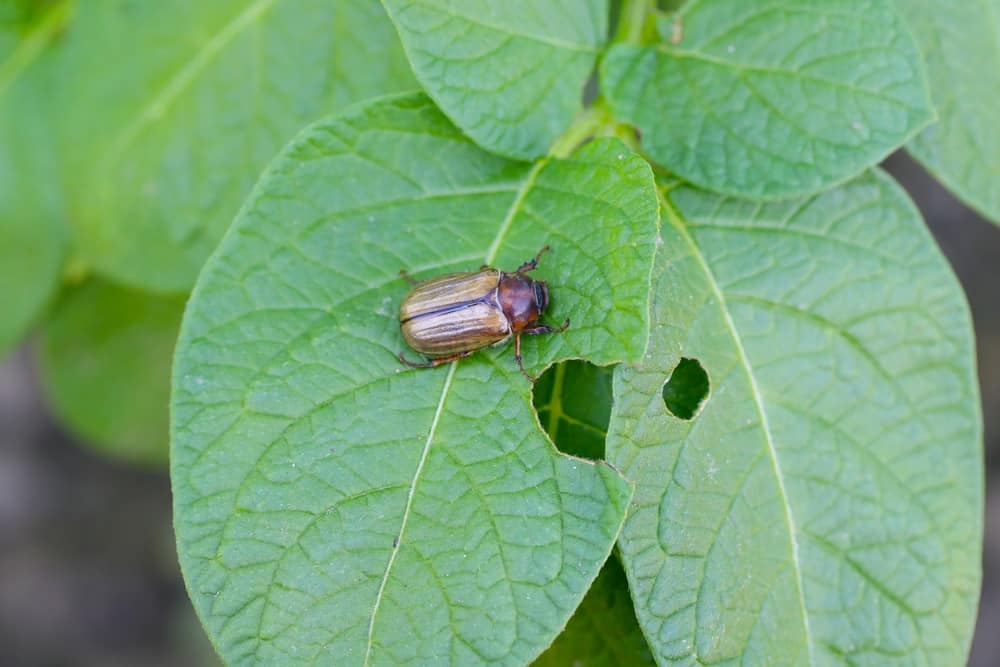 After a long winter, everyone is excited about spring. Finally, the temperatures rise, the vegetation comes to life again, and animals seem to become especially active. Butterflies fly around, birds are chirping, everything is perfect, right?

Well, not exactly. Apart from those lovely animals, some other not-so-lovely animals become active during the late spring. One such animal is the June bug, also known as the May beetle. These bugs are a nuisance for many people, but if you take some time to learn a bit more about them, you will also be able to get rid of them more easily.

June bugs got their name because the adult specimens emerge from the soil during May and June. They inhabit the Northern hemisphere, and it is estimated that there are almost 300 June bug species.

Adult June bugs have two sets of wings under the smooth protective cover. They are usually red or brown, but some species are green, gray, or almost black. Males have large fingered antennae, while females have shorter, knobby antennae.

Their bellies are usually brown or green and they have a metallic sheen. Many species have hairs of various hues and patterns. June beetle also has barbed legs that allow it to stick to almost any surface.

June bug larvae are called grubs, and they look like white, fat worms with brown legs and heads.

Speaking of larva, these insects go through several stages of development during their life cycles. Their mating season begins in mid-to-late summer. The female June bug lays 50-200 fertilized eggs in the ground, just below the surface.

The eggs will hatch in 3-4 weeks and the larvae will stay underground for 3 months to 3 years. While there, they will feed on grass and plant roots. During cold winter months, larvae will dig deep burrows in the ground to survive the cold temperatures.

Some of the most (in)famous June bug species are:

There are many other June bug species, but they all share similar life cycles and feeding habits.

Adult June bugs communicate by rubbing their mouths and limbs together. They are quite fast and will burrow themselves when in danger.

Although they have two pairs of wings, June bugs can only fly shortly. They are attracted to artificial lights, so they can be spotted swarming around street lights or porch lights.

Some June bug species produce a sound by flexing a membrane in their abdomen. The exact reason for making these sounds is unknown, but it is assumed that it is a part of the mating ritual.

What Do June Bugs Eat?

Apart from feeding on roots, June bugs will feed on minerals from the soil, making it less fertile and further contributing to the destruction of the crops.

June bugs can create large spots of dead grass by eating its roots from underneath the ground. This way, they are able to destroy not only lawns but also large pastures intended for animal grazing.

While June bugs will eat almost anything they can, different species have developed different feeding habits. For example, green fruit beetle prefers to feed on ripe fruits, as his name suggests.

On the other hand, the Japanese beetle is particularly interested in eating strawberries and peppers. European chafer feeds almost exclusively on grass and grassroots, and it continues to eat grass even during the winter months.

The common June bug prefers to feed on the foliage of leafy green plants, but it will also eat maize, corn, oak, walnut, and even Christmas trees. Green June bugs love to eat decaying plant material found in root and thatch areas of grass. They also enjoy eating carrot and sweet potato roots.

As their name suggests, the black turfgrass ataenius beetle mostly feeds on grass, causing the turf to show drought-like symptoms. Occasionally, these beetles will cause such root damage that the turf starts looking like a rolled-back carpet.

Also known as the watermelon beetle or hissing beetle, the ten-lined June beetle feeds on the roots of crops as well as on the garden and ornamental plants.

It might sound illogical, but June bug larvae are more dangerous to crops and other plants than adult specimens. They feed more often and they are able to eat larger amounts of food, hence they make more damage.

What Do June Bugs Eat In The Captivity?

Some people keep June bug larvae either as pets or as a valuable food source for other pets. As such, they are fed tree barks, grassroots, and even dry cat food moistened with water.

What Do June Bugs Do To Humans?

When it comes to their interaction with humans, June bugs are harmless as they won’t bite or sting and they are not carriers of any known diseases. Sometimes they will land on humans, but it will be a brief encounter.

June bugs also pose no danger to small children or pets. The only annoying thing they do (except decimate your crops), is make loud noises when they are active during the night, which can wake some people up.

June bugs are paradoxical animals: they are nocturnal insects, but they are also strongly attracted to bright lights. There is no explanation for why are they like this, but some researchers assume they confuse artificial lights for moonlight.

Of course, June bugs are attracted to places where they have an abundance of food sources. This means fertile soil, lawns, gardens, pastures, etc.

What Are The Predators of June Bugs?

Fortunately, June bugs have many natural predators. Some of the animals that feed on June bugs are skunks, raccoons, snakes, frogs, toads, nematodes, and other wild animals.

Parasitic wasps can also be considered June bug predators, as they burrow into the ground until they find June bug grubs. Then, they paralyze the grubs and lay their eggs on them. Once the eggs hatch, they will feed on grubs before going to the surface.

How To Get Rid Of June Bugs?

There are several ways to get rid of June bugs and even prevent the June bug infestation. For a start, you can use various insecticides to spray the soil’s surface in September. This will help you get rid of grubs that would otherwise grow and make even more damage.

There is also another way to get rid of June bugs without using dangerous chemicals. One bacteria species, known as bacillus thuringiensis (BT), will efficiently kill June bug grubs, and it can be used as an organic insecticide.

Make Your Own June Bug Trap

The next step is getting rid of the adults. You can achieve that with homemade June bug traps. Fill a large jar with 1/2 cup of molasses and 1/2 cup of hot water.

Shake the contents and bury the jar where you know there are June bugs. Leave the jar’s opening above the ground level. The June bugs will enter the jar, but won’t be able to get out. Refill the jar every morning until you get rid of all June bugs.

When all else fails, consider calling the experts. They are well equipped and have experience with various pests, which means they will be able to efficiently get rid of June bugs for you.

June bugs might seem like silly bugs when you see them swarming around the street and porch lights. However, June bugs can cause massive damage, even more than most other pests.

They feed on roots, grass, trees, leaves, fruits, vegetables, crops, ornamental plants, etc. While feeding, they will destroy whole lawns and pastures, and will even kill large trees by eating their roots.

Do you have problems with June bugs? How do you deal with them? Write in the comments!