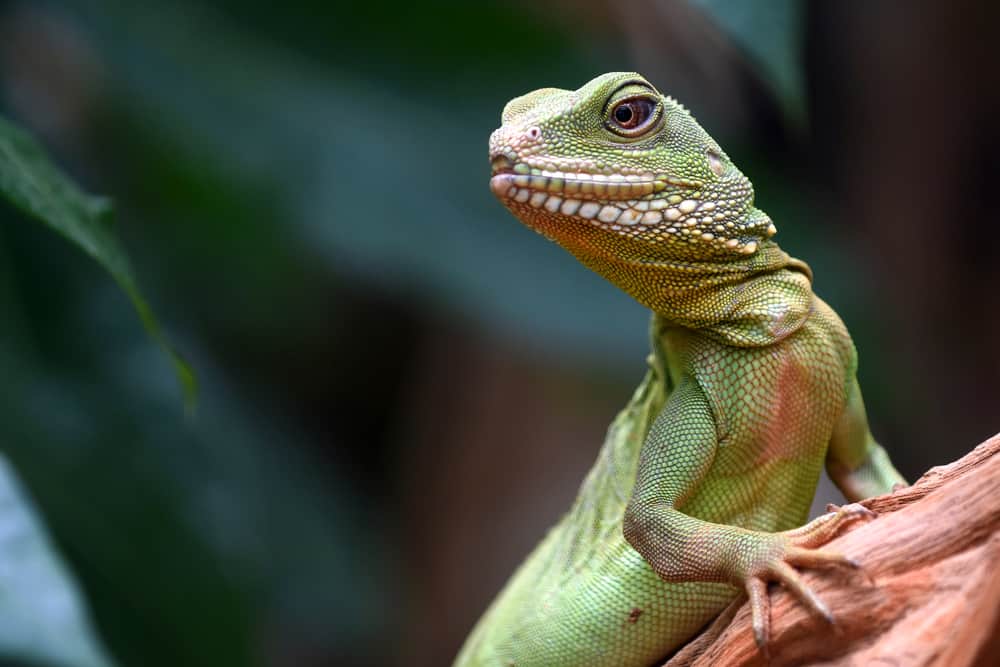 Lizards are a large group of reptiles, with over 7000 species currently roaming the earth in various different countries and climates. They vary in shape and size but they all have fascinating characteristics which turned them into symbolic animals for certain cultures, countries, and religions.

Today, we are going to be looking at how lizards have been symbolized throughout time, while also looking at how they are viewed in modern popular culture. When you’re finished reading, you will almost certainly look at them differently. 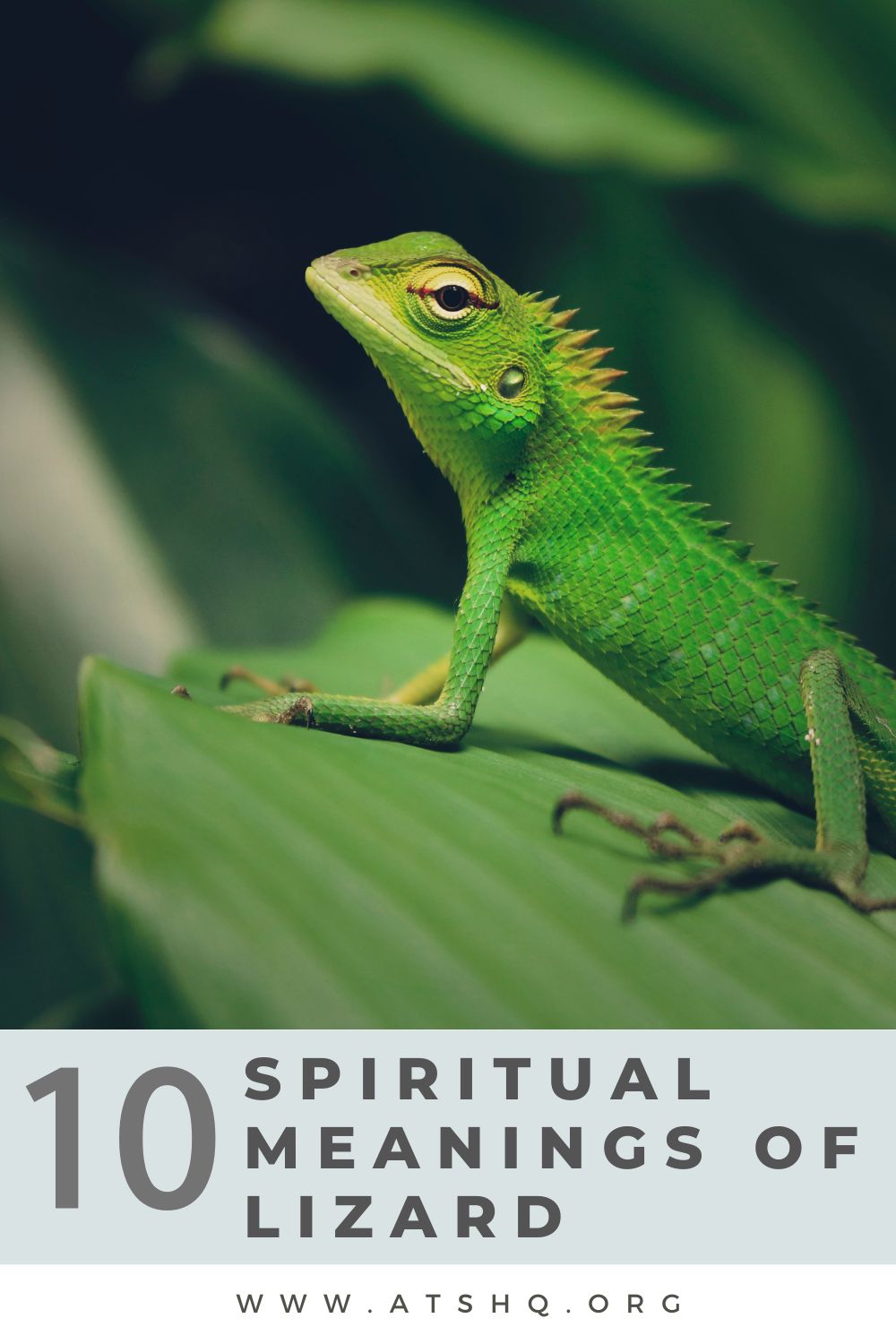 Before we look at how they are symbolized, you are going to want to know some key characteristics and facts about these reptiles. As we’ve already mentioned, there are literally thousands of lizard species on earth so we will focus on specifics.

The most interesting fact about lizards is that many of them can detach their tail from their bodies. The reason why they do this is often during times of stress when they are being attacked by a predator. By ditching their tail, they can get away faster while also confusing the predator the same time. The best bit of all is the fact that their tails naturally grow back in time meaning they can repeat this trick multiple times throughout their life.

This isn’t the only piece of wizardry available to some lizards either. Species such as Geckos and Chameleons are able to change colors. This is also a defense mechanism when being hunted as they will often change colors to match their surroundings to keep camouflaged and hidden from predators.

The final point on wizard-like qualities comes from the basilisk lizard which has the incredible ability to run on water. Due to this, they are also known as the Jesus Christ Lizard.

In terms of hunting, most species of lizards follow a similar diet. The majority of lizards in the world are insectivores which means they are only interested in eating insects such as crickets, moths, ants, cockroaches, mealworms, and flies. These lizards include:

However, there are certain species of lizard that follow a different diet. For example, the largest lizard on the planet – the komodo https://www.atshq.org/dragon-symbolism/dragon – is a carnivore meaning it only eats meat. Their diets consist of large animals such as pigs and deer while smaller carnivorous lizards tend to eat things like rats, rabbits, fish, and mice.

The majority of lizards are exclusively wild, while others can be bought as pets. In the wild, you will find species of lizards in every continent on earth apart from Antarctica. They can survive in almost any habitat, other than cold temperatures, but they are mostly found in trees or on the ground.

If you keep a lizard as a pet then the rules and regulations will vary depending on the species you have. Please make sure you do thorough research before purchasing a lizard as a pet as they can be complex animals to look after.

Lizard Symbolism Around The World 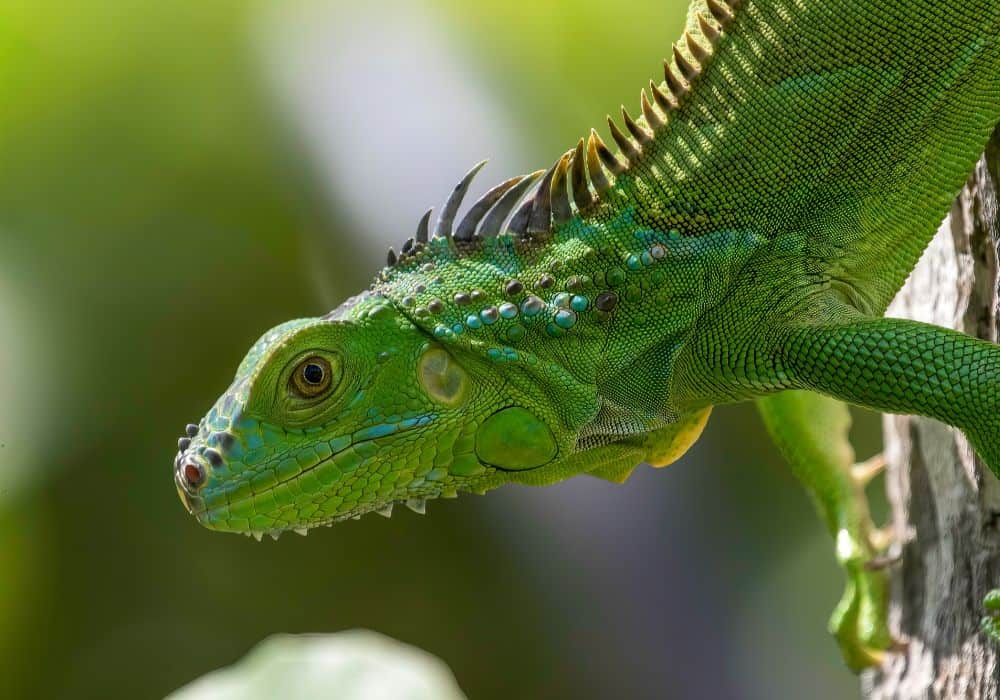 Now that you have some incredible lizard facts in your back pocket, it’s time to delve deeper into the symbolism surrounding these creatures. While certain cultures have their own interpretation of what the lizard symbolizes, in general, they are associated with patience, sensitivity, rebirth, and regeneration.

Lizards are an important animal to many Native American tribes but in general, they are said to symbolize survival and healing to most Native Americans.

In some tribes, children are given amulets (good luck charms) in the shape of lizards for protection and strength. While in others, like the Navajo tribe, the lizard is seen as a protector who brings prosperity to the land.

In tribes such as the American Anasazi, Hohokam, Mimbres, and Mogollon, the lizard is seen in motifs and paintings, symbolizing their importance to these cultures.

However, the most powerful symbolization of lizards in Native American tribes comes from groups like the Hopi tribe who believe that lizards have sacred healing powers. Legend says that the Piman people used to sing songs to bring about the lizard spirit to cure people of illnesses and would place lizards on ill people’s bodies as medicine.

Finally, the Iguana is a sign within Mayan Astrology for those born between December 13th and January 9th. These people are said to have the Iguana’s strengths which include knowledge, strength, and prosperity.

In Celtic cultures, they have a few different thoughts in relation to lizards. One story from Celtic folklore tells of how a Night Goddess called Evaki stole sleep from the lizard’s eyes and gifted this sleep to all other creatures in the land. Therefore the lizard is thought of by Celtic cultures as a creature that never sleeps and one that symbolizes restlessness and tiredness.

In other Celtic tales, reptiles such as lizards are featured heavily as evil beings suggesting that these creatures are looked on in a negative light by those who follow the Celtic culture.

Those who follow Celtic Wicca, a modern tradition that incorporates elements of ancient Celtic mythology, believe in the importance of lizard symbolism and wisdom when potion-making.

Newly married celts listen out for a gecko’s call on their wedding night to solidify their new marriage and to bring them good fortune.

Lizards are generally looked at in a positive light by those in Arica due to how prominent they are in the continent. They are often seen in African homes and welcomed by those who live in them due to their harmless nature. The only exception to this is if a fire sink lizard is spotted in your home – when Africans spot one they abandon all plans for the day as they are considered bad omens or bad luck.

In the past, different stories from African tribes and clans have presented lizards in different ways. One myth from the African Bantu tribe tells the story of a chameleon who was sent to earth by a God called Unkulunkulu to tell humans that they will last forever. On the journey to earth, the chameleon got distracted and another lizard goes instead and tells the humans that their end is near. This suggests that the Bantu tribe saw lizards as symbols of untrustworthiness and mixed messages.

In Egypt, there is a hieroglyphic symbol that resembles a lizard and it means ‘plentiful’ or ‘many’. This suggests that lizards symbolize the importance of family and having large support groups around you in Egypt.

In some eastern cultures, the lizard is seen as a symbol of love. In ancient times, people would create love potions from lizards with the drink being served in pots with lizard markings on the side. This has evolved in time with the lizard now being regarded as a symbol of sexual activity in Japan.

Aside from love and sex, lizards used to be seen as sacred creatures that could bring about rain to barren lands. Children used to gather lizards in jars and then beat the jars like a drum to try and bring rain to the land.

Reptiles such as snakes, lizards, and crocodiles are generally looked at as evil beings by those who follow Christianity due to the story of Adam and Eve, where a snake convinced Eve to eat the forbidden fruit.

However, it may come as a surprise that lizards are specifically mentioned in a positive light in the Bible. In Proverbs, lizards are listed as one of the four things on earth that are incredibly wise despite their small size. The passage states that lizards are wise because they can get into the palace undetected and spy on royals.

As we mentioned earlier, there is actually a lizard that is known as the Jesus Christ Lizard due to its ability to walk on water. While some Christians take offense to this, others believe that it shows lizards are sacred animals.

How To Interpret A Lizard Encounter? 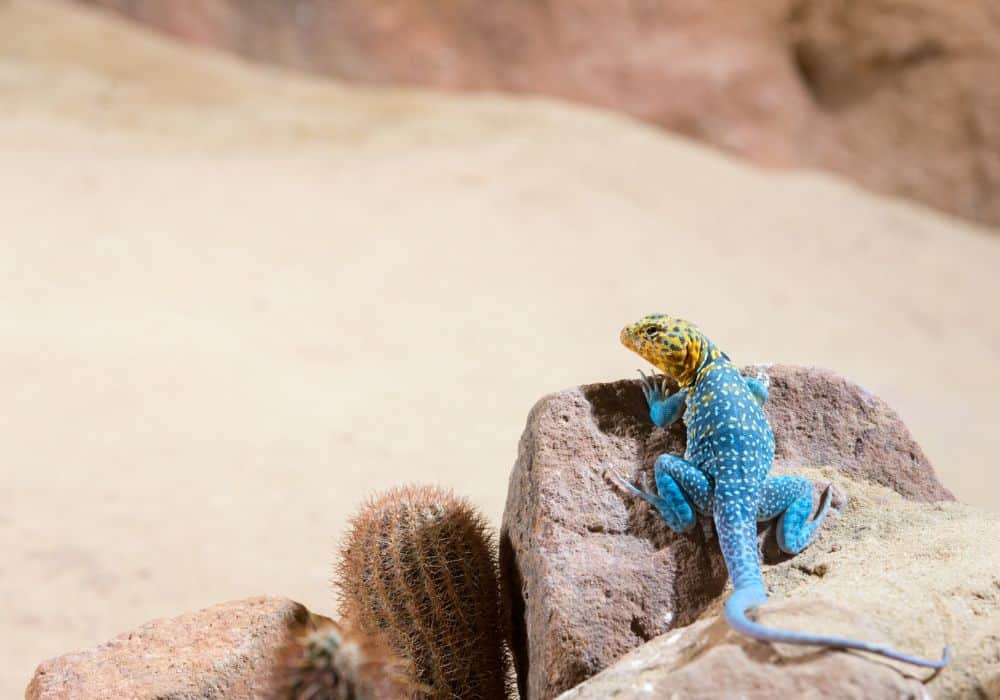 Now that you know how these creatures are interpreted and symbolized by different cultures across the world, you will probably stop to appreciate them more next time you encounter one regardless of what species it is.

When you next encounter a lizard consider what the meaning behind the encounter may be. One interpretation could be that it is a sign for you to stop hiding who you really are. You need to strip back your layers and remove the mask you are wearing. Don’t be afraid of being your true self because it will bring you more happiness in the long term than trying to be something you are not.

Another interpretation is that is a sign for you to keep fighting. Lizards never give up and use all their strength and powers to escape when they are being hunted and while we don’t get hunted as humans, we do face obstacles. It’s easy for us to give up when we face these obstacles but we should take inspiration from lizards who never give up even in the greatest of adversities.

It is important to note that while these interpretations are valid for real-life encounters, you should also consider them if you are having recurring lizard dreams.

A lizard spirit animal means that you are going to share similar characteristics with a lizard meaning you will be a greater adapter and fighter. You will know how to handle yourself in difficult situations and giving up is never an option for you.

Additionally, the color red is deeply connected to lizard spirits so it is likely that this color resonates with you in more ways than one. 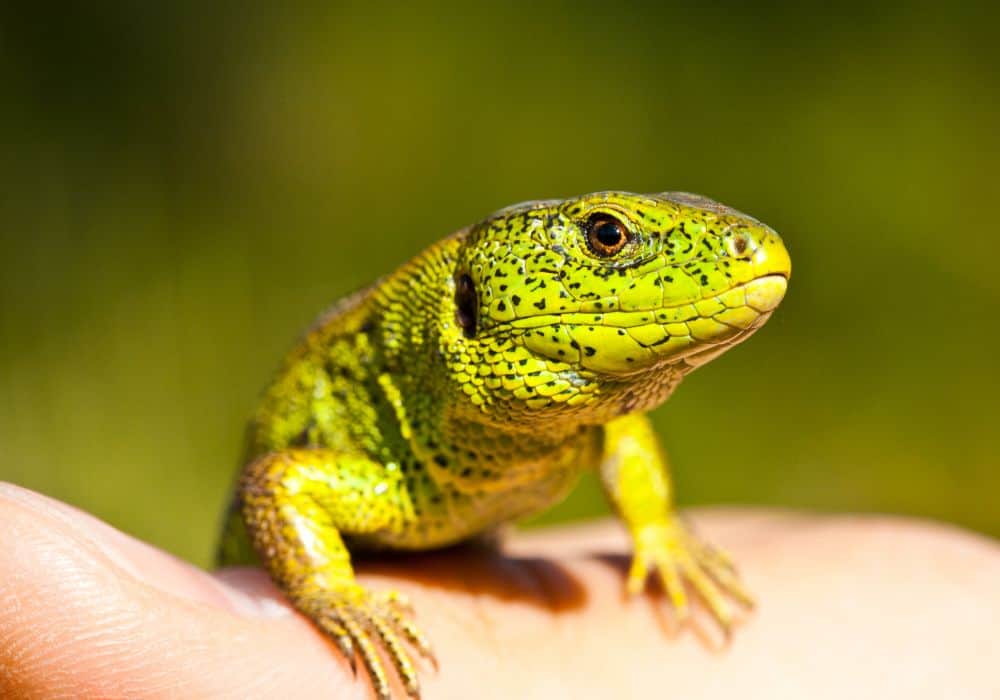 Lizard totem animals are very powerful in Native American tribes. They will help you to adapt to new surroundings throughout your life as you are likely somebody who will seek out new adventures in different places rather than staying put in one place. If you ever fail at anything in your life, your lizard totem animal will give you the power to forget about it and rebuild in your next challenge. 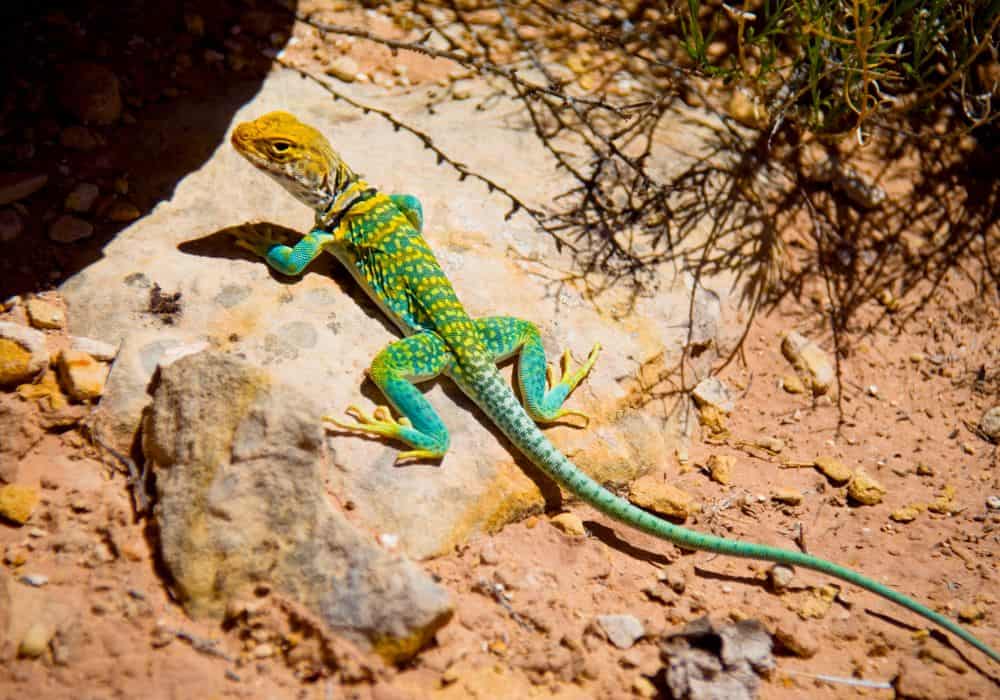 A lot of what we have spoken about today comes from ancient texts, rituals, and mythology. However, it’s also essential to understand how lizards are viewed in modern popular culture, after all, that is a driving force in how certain creatures are perceived nowadays.

One of the most popular movie franchises in modern times is Marvel and one of the most popular characters within that franchise is Spider-Man. One of Spider-Man’s most fierce enemies is called ‘the Lizard’ and is a one-armed doctor who believed that by experimenting with lizards he could re-grow his arm much in the same way lizards re-grow their tails.

The experiments go wrong and he turns into a human-sized lizard, wreaking havoc on the city of New York until Spider-Man saves the day. This gives off the impression that lizards are menacing creatures with evil intentions which may well be why some people in society today look at them negatively.

A more positive popular culture reference to lizards is in the Disney movie, Tangled. A chameleon called Pascal is the main character’s best friend, offering support and love to her throughout the movie.

To conclude, lizards are symbolized by many different cultures, religions, and societies and have been for centuries. While they are typically seen positively, some cultures associate them with other reptiles such as snakes and crocodiles who are more typically seen in a negative light. Ultimately, though, it’s up to you how you look at lizards as they are wondrous creatures that can do magnificent things.