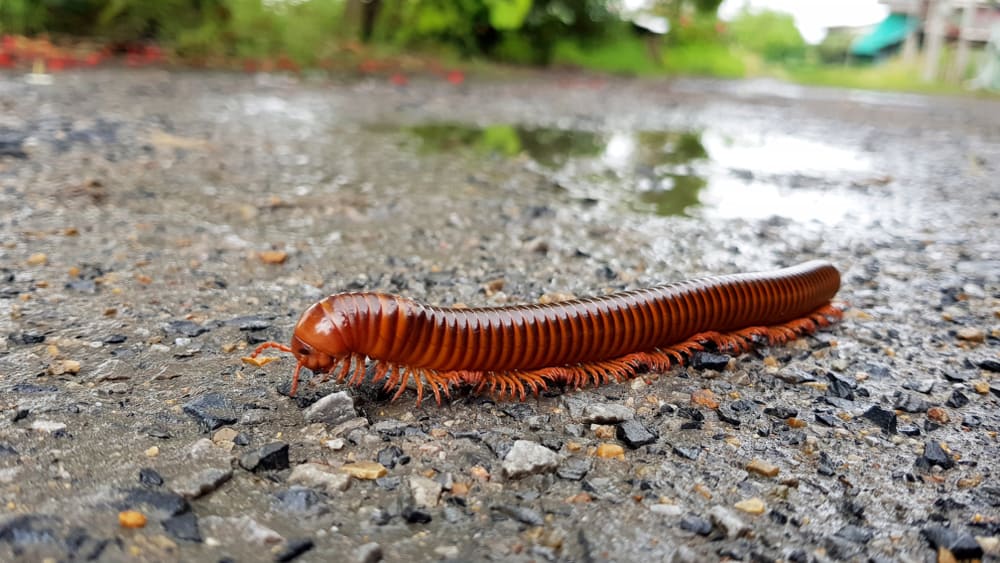 Millipedes are everywhere, you have probably seen those worm-like creatures roaming your garden and even your house, and you wonder if they would cause harm to you, your furniture, or something important when they want to eat.

If you fall into this category, or you wish to have a pet millipede and the question ‘What do millipedes eat?’ is still unanswered, this article is here to enlighten you on what can serve as food to millipedes.

Before we dive right into it, here are some facts about the arthropods. They fall into the class Diplopoda and have similarities to the centipedes of the class Chilopoda; in fact, many would refer to these creatures as cousins.

They are long and cylindrical, measuring around 20 to 45 mm in length but sometimes up to 20 cm. Contrary to many beliefs, millipedes do not possess a thousand legs. The millipede with the most legs is Illacme plenipes and only has 750 legs.

When a millipede hatches, it has three pairs of legs, and it can grow a total of 200 legs as it grows into an adult. Their body is divided into segments, each with two pairs of legs attached to it. They have no compound eyes; instead, they have many simple flat lensed ocelli on each side of their head.

Millipedes are one of the oldest living creatures to walk on land. Fossil findings date the millipede’s existence on the ground to 420 million years ago, during the Silurian Period, when land first appeared on the planet.

There are over 12,000 species of millipedes, and most of them can be found in the Caribbean and South Pacific. These arthropods are also molters as they tend to shed their skin several times as they grow.

Millipedes coil themselves when attacked to protect the softer parts of their body. They may also use their front legs to bury themselves in soil when they feel threatened or disturbed.

These critters mostly prefer to stay in dark and damp places, as they need moisture to live. Therefore, you will most likely see them in wet soils, in compost piles, and under mulch and leaf litters. You could also see them inside your house during the rainy season, especially if it is damp.

Can You Keep A Millipede As A Pet?

Yes, you can keep a millipede as a pet! Millipedes are actually a popular pet for people who love crawly critters.

According to Katherines Crawling Creatures, caring for millipedes is not much different than caring for snails because snails also require moisture. Both creatures can be kept together in the same cage.

If you wish to keep a millipede or millipedes as pets, ensure that the tank they live in has a high humidity level. If you are looking to get a pet millipede or you want to know more about them, Millibase.org gives a database list of the species of millipedes.

The two arthropods are often mistaken for each other, and while they share some similarities, their differences are more. Before we go into their differences, we should figure out what makes them similar.

The two creatures have segmented bodies divided into numerous parts, and they both prefer to stay in dark and damp areas, where you often find them. They also have spiracles at their sides which they use to breathe.

The two are not considered insects; they are known as myriapods. This is because, unlike other insects, their body is divided into more than three segments, and with each segment holding a pair or pairs of legs, they have more than the 8 or 6 legs insects often have.

Both are invertebrates, and they have exoskeletons. They also shed their skin as they grow into adults. In case you get confused anytime you encounter either of them, these are some things you can look out for.

The Differences Do Exist

While millipedes are often shorter and rounder with rigid bodies, centipedes are flatter, thinner, and longer. Centipedes are also flexible, giving them the ability to slither.

Millipedes are docile; they do not bite; however, centipedes will bite when they feel threatened. They also have maxillipeds, their first two legs that are poisonous. They use this to protect themselves and hunt for prey.

Millipedes are classified as herbivorous detritivores, although few fall under omnivores, while centipedes are carnivores; they feed on smaller insects and bugs. Millipedes also have shorter legs and antennae than centipedes.

What Do Millipedes Eat?

Millipedes are scavengers; terminix.com refers to them as nature’s little recyclers. This is because, as detritivores, they primarily feast on decaying things. They mostly fancy eating anything dead and decaying.

You would likely find a millipede feeding on these things, be it damp or decaying wood particles, leaves, rotting wood, decayed tree barks, or fruits.

However, in the absence of anything dead and decaying, millipedes would then turn to live plants, fungi, and fruits.

If you wish to feed your pet millipede something that is not decaying, try vegetables and fruits like apples, cucumbers, and romaine lettuce. Please don’t give them iceberg lettuce as they do not give the necessary nutrients a millipede needs.

Also, millipedes will not eat pepper, garlic, onions, or pickled plants. After eating your bananas, please don’t throw the peels away; wait till it decays a little, and then give them to your millipede.

Omnivorous millipedes feed on smaller dead insects, such as earthworms, bugs, and decaying carcasses. Millipedes also eat the skin they shed; scientists believe this makes up for the lost calcium.

What Do Millipedes Eat In The Garden?

The Portuguese millipedes, which you can identify by their shiny bodies, are one species of millipede that move in swarms.

The few times millipedes can become a threat in your garden is when they run out of decayed matter to feast on. At this advent, they would turn into soft tissues in your garden to eat like cucumber plants, tomatoes, and strawberries.

They can also eat plant roots, seedlings, and germinating seeds.

If you feel like the millipedes in your garden are destroying your plants, then one thing you can do to drive them away is trying to make your garden as dry as you can. 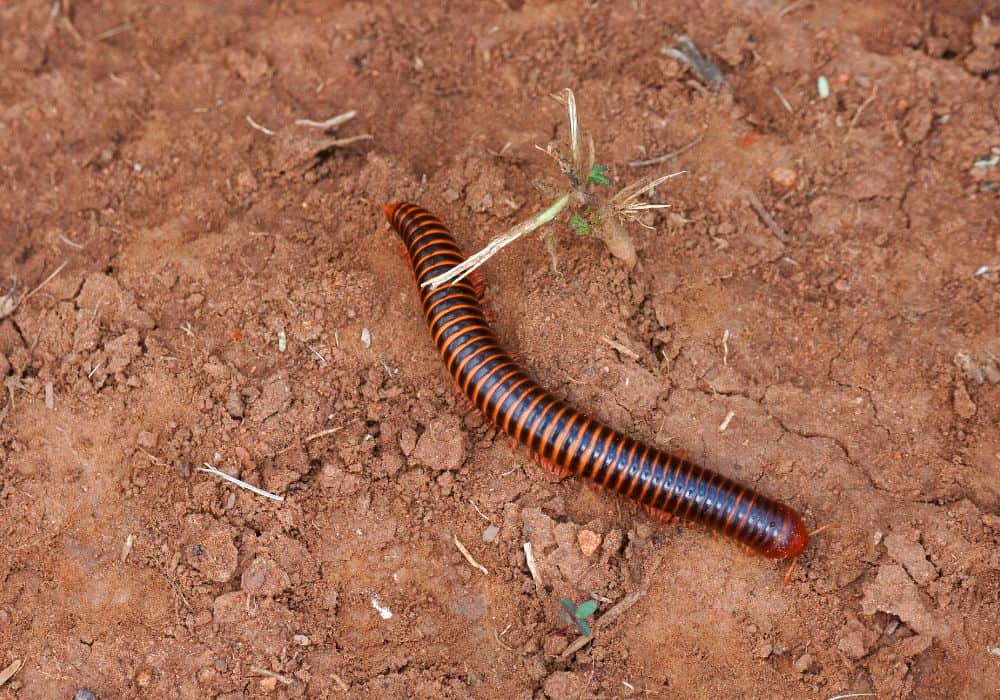 The simple answer to this is no; millipedes cannot bite humans. These creatures are very docile and gentle and do not bite or sting.

However, when threatened, they secrete a fluid to protect themselves. The foul-smelling fluid secreted by millipedes might be poisonous to humans in large quantities, but it is not toxic in the amount secreted.

The secretions from a giant millipede could burn the eyes, cause skin itching, and leave behind skin discoloration. Also, if a person is allergic to millipedes, merely picking them up would cause a reaction, and the response could be more severe in the presence of this fluid.

Some signs that may show when someone is allergic to millipedes are; blisters and hives, redness, itchiness and burning, and rashes.

Are Millipedes Good To Have Around? 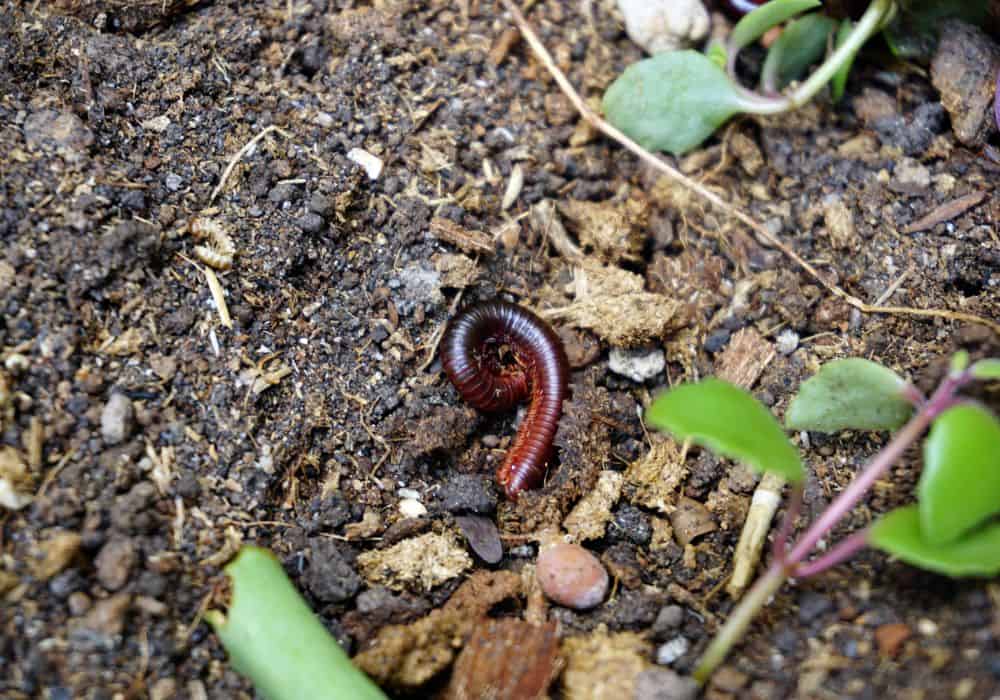 Millipedes cannot necessarily be considered pests because, as small as these creatures are, they have an excellent and significant impact on our ecosystem. They serve more environmental purposes besides helping break down dead and decaying compost.

For instance, they are essential for soil health; they burrow through the soil and help break it down. They aerate the ground and serve as decomposers. After eating up the decayed plant material, they excrete processed and broken-down organic matter, serving as nutrients and humus to enrich the soil.

Millipedes also work as an earthworm; they help transport nutrients to different parts of the soil.

Millipedes are a fascinating and essential part of our ecosystem. They come in many shapes and sizes and can be found on every continent except Antarctica. While they may seem like pests to some people, millipedes play an essential role in the environment and should be appreciated for their contributions.

I hope you found this article helpful!  Feel free to comment if you have questions or tips about what millipedes eat!