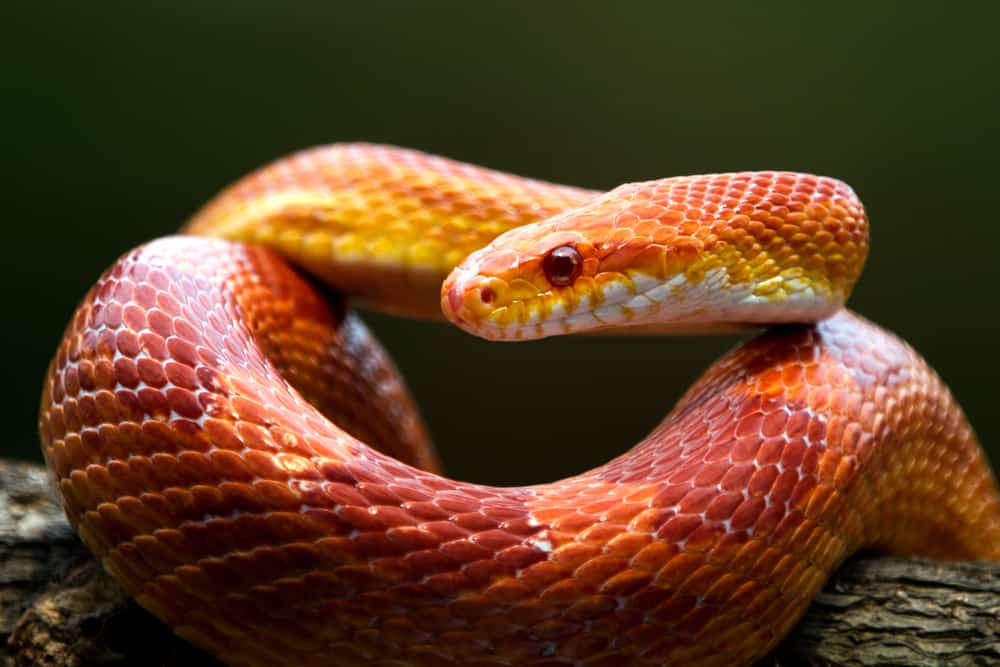 Corn snakes are one of the most popular snake species to be kept as pets. They’re relatively easy to take care of, don’t grow too big, aren’t aggressive towards humans, and are active during the day.

If you’re thinking about getting one, this article will let you know everything you need to know about feeding the corn snake, from what kind of food it eats, to tips on how to actually feed it.

What Are Corn Snakes?

This species belongs to the genus Elaphe, which consists of snakes that are commonly called rat snakes, and the corn snake is the best-known member of its genus. Despite that, it’s frequently killed after being mistaken for another snake called copperhead, which is venomous.

Corn snakes aren’t venomous, but have a similar appearance to the copperhead, which results in fatal confusion. In reality, corn snakes are helpful to farmers, because they control local rodent populations, which often cause problems for farmers.

As pets, corn snakes are great, as they have a beautiful appearance characterized by maize-like patterns in colors ranging from orange to brown. They grow up to 4 feet long, but bigger individuals reaching 6 feet in length have also been recorded.

Corn snakes achieve their full size in about 4 years, but that’s just the start of their lives. While in the wild these snakes live just up to 8 years, in captivity they can reach over two decades old! The oldest corn snake recorded was 32 years old.

As corn snakes are becoming increasingly popular among reptile hobbyists, people have already bred hundreds of different varieties, also called morphs. There are dozens of different color variations, for example:

Morphs also differ in patterns, for example, there’s a popular variation called “motley”, which features a clear underside with an inverted pattern. There are also compound morphs, which result from breeding two distinct morphs.

Such a wide selection of corn snake morphs means that every single snake lover, regardless of their preferences, will find a corn snake variation that they love. That’s one of the reasons why this species is becoming more and more popular.

What Do Corn Snakes Eat?

In the wild, the corn snake’s diet depends on its age. Juvenile snakes are most likely to prey on lizards and amphibians, while adult individuals will prey on small mammals like moles, mice, rats, rabbits, and squirrels.

It’s because corn snakes are constrictors, meaning they wrap around their prey and asphyxiate it by squeezing. Juvenile snakes aren’t capable of hunting larger prey and are too weak to constrict it to death, while adults are much stronger.

As pets, corn snakes should eat a similar diet as in the wild. They’re carnivorous predators, so their diet should consist solely of protein and fat. Here are some of the most popular food options:

That’s arguably the most widely used food option for corn snakes. Frozen mice are readily available at many pet stores, both in brick-and-mortar establishments or online. Make sure to thaw the mice before feeding them to your corn snake.

If you attempt giving your snake a frozen mouse that’s not thawed, chances are your snake won’t even eat it, but if it does, it could lead to health problems, so it’s never wise to risk it.

You can thaw frozen mice by putting them in a zip-lock bag and submerging it in a bowl of cold water, replacing the water every 20-30 minutes to maintain a low temperature. Depending on several factors, most frozen mice should be ready to serve after an hour.

It’s also possible to just take a frozen mouse out of the freezer and put it into your fridge overnight, but most people don’t like the idea of having a dead mouse close to their food, so it’s up to you how you’re going to thaw frozen mice.

Some owners also occasionally treat their snakes with other types of frozen food, including chicks or other rodents than mice, like guinea pigs.

While corn snakes will grow healthy just on a diet consisting solely of frozen mice, you can also feed them quail eggs once in a while, but not more frequently than once every two weeks.

In the wild, corn snakes sometimes come upon bird eggs and eat them readily, but it’s never a big part of their diet, so you shouldn’t try experimenting and feeding your snake more eggs than necessary, which is none.

This option is better than its frozen counterpart because live food always contains more nutrients than frozen. Additionally, corn snakes are natural predators that were born to hunt and constrict their own prey.

Using live mice as food can be a great exercise for your corn snake. However, there are many drawbacks to using live mice, as you have to take care of them until saying goodbye and serve them as dinner to your snake.

As corn snakes don’t require food frequently, it becomes expensive and time-consuming to feed them live mice. There’s also a risk of live mice putting up a fight with your snake and even injuring it. A juvenile corn snake can even die if you attempt feeding it a large living rodent.

If you want to feed living mice to your corn snake, the best option would be to do it just once in a while for special occasions. It will guarantee that your snake gets some exercise and experiences what it’s like to hunt, without you having to raise mice on the side.

Corn snakes are far from being the apex predators of their food chain. As a result, they have many predators that are preying on them, including carnivorous mammals like foxes, bobcats, coyotes, skunks, weasels, possums, and raptors, like hawks and owls.

The most important thing to know about feeding your corn snake is what size mouse to feed. It depends on the age and size of your corn snake, but as a general rule of thumb, don’t feed your snake bigger mice than its body width.

Like most constrictors, corn snakes have stretchy bodies which enables them to swallow much larger prey compared to their body width, but there’s no reason for using larger food when smaller mice are sufficient.

For general guidelines, you should feed pinky mice to your corn snake that’s younger than 6 months. Feed a single pinky which usually weighs around a gram every 5 to 7 days. When your snake grows, start feeding it hopper mice once a week until it reaches 1 year old.

From that point on, continue feeding your snake once a week, but start giving it large mice weighing over 20 grams. As your snake gets older and becomes 2 years old, start feeding it less frequently, every 7 to 10 days with 2 adult mice or a single small rat.

Finally, as your corn snake becomes 4 years old, continue feeding it the same amount, but only once every week or two. As the snake gets older, its metabolism slows down, and it requires less food.

Most beginner snake owners don’t know how to actually feed their snake, but it’s easier than it might seem at first. If you’re using live mice, there won’t be any problems and your corn snake will attack it as soon as you release it into its terrarium.

However, your snake might not be that interested in a thawed mouse that was frozen. If that’s the case, there’s a possibility that your snake isn’t hungry, but most corn snakes eat food at every opportunity they get. Most likely, a dead mouse isn’t seen as food.

Here are some methods you can use to prompt your corn snake to eat frozen mice:

The first and the most popular one is to take the mouse by its tail (it’s recommended to use tongs or another tool instead of bare hands) and start wiggling the mouse in front of your snake.

It will stir its hunting instincts, making the snake attack what appears to be living prey.

Dead mice have less scent than live mice, that’s why your corn snake might not be trying to prey on it. To solve it, you can spray special scents onto the mouse, which will make your corn snake think that the mouse is still alive.

There are many different sprays on the market, ranging from lizard to rodent scents. If you’re tight on budget or simply don’t want to buy such a spray, you can make a small cut on the nape of the mouse, making blood appear.

As corn snakes have a well-developed sense of smell, the blood will prompt them to eat the mouse. If you’re using this method, always be wearing disposable gloves and wash your hands afterward.

Now you know that the best food for corn snakes is frozen mice, but don’t forget that the size of a mouse depends on the age and size of the snake, so don’t feed your pet too large of a meal!