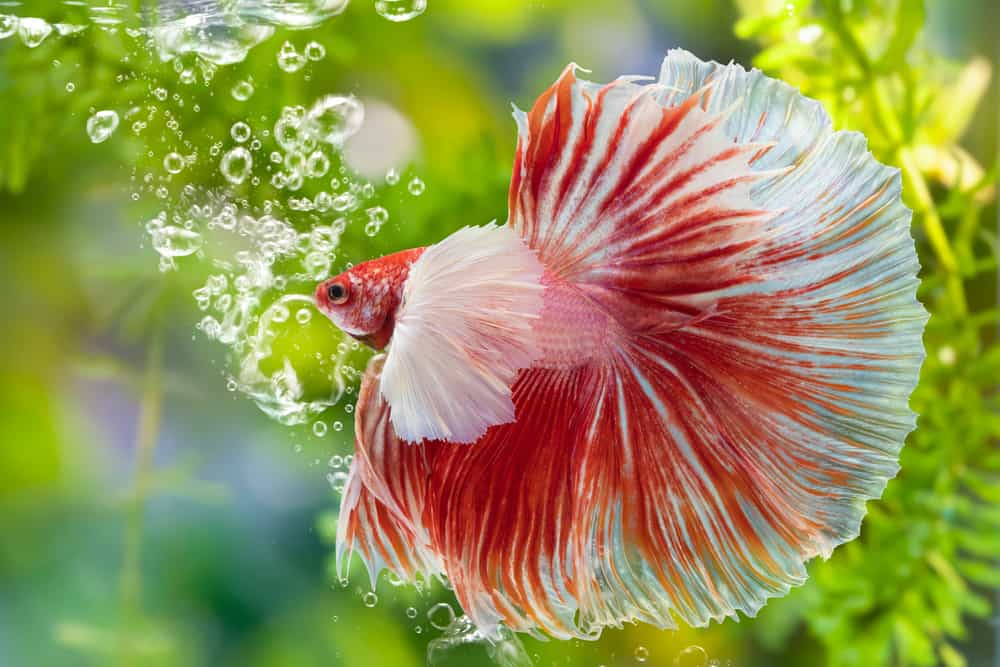 Betta fish are often recommended for beginners as the first fish to start off their fish-keeping journey. However, many novices experience problems when feeding their betta fish, or don’t know what to feed them in the first place.

In this article, we’re going to share everything you need to know about feeding your betta fish properly and guaranteeing its health and longevity.

What Are Betta Fish?

It was one of the first fish species to be domesticated, and it happened as early as 1,000 years ago in Thailand, the origin country of this fish. In the wild, it’s only found in Southeast Asia, but now it’s found in home aquariums all around the globe.

Betta fish became so popular because it’s small, growing just up to 3 in (7.6 cm) in length, meaning it doesn’t require large aquariums or expensive filters. Additionally, its appearance is arguably the most diverse out of all fish species kept at home.

Fishkeepers have selectively bred dozens of betta fish varieties, differing in colors from red and green to lavender and metallic, in color patterns ranging from solid and bi-color to marble and nemo, and finnage variations, including dozens of different fin shapes.

What Do Betta Fish Eat?

In the wild, betta fish eats a varied diet, consisting of smaller crustaceans, zooplankton, larvae of mosquitos, small flies, and midges. It’s a high-protein diet that can be difficult to replicate when you’re keeping betta fish in an aquarium at home.

Here are the most popular things to feed betta fish:

We recommend basing the diet of your betta on fish pellets, but be aware that you should get those that are specifically made for betta fish. Only such pellets contain all the necessary nutrition for your betta fish.

Another option is fish flakes, but most betta fish owners have reported that their fish aren’t that keen on eating those. Your betta fish might enjoy them, so don’t be afraid to find out for yourself. Once again, keep in mind that you must buy fish flakes that were specifically made for betta fish.

The third option is to buy freeze-dried food that’s similar to the diet of betta fish that are living in the wild. Such options include freeze-dried fruit flies, white worms, bloodworms, etc.

If you choose to feed your betta fish with freeze-dried foods, you should be cautious about guaranteeing the variety. Feeding your fish just a single type of food will lead to health problems because no single food can give all the necessary nutrients.

That’s why most experts recommend using freeze-dried foods just occasionally as a treat for your fish, instead of basing an entire diet on them.

You can also supplement the diet of your betta with frozen foods. It has an advantage over freeze-dried foods because usually the foods, be it bloodworms, fruit flies, or other animals, were frozen when they were still alive.

This fact makes frozen foods more nutritious compared to freeze-dried counterparts, which lose some nutrients during the process of being dried.

Finally, you can feed your fish live foods. This option offers the most nutrition to your fish but has many downsides.

First of all, you have to take care of the food itself before you’ll feed it to your betta fish. The alternative is to buy some every day and instantly feed it to your fish, but obviously, that’s terribly impractical.

Taking care of live food, be it worms or brine shrimp is a challenge on its own. If you’re up for such a challenge, it would be better to buy a food-growing kit, which comes with everything you need to breed and maintain the food alive.

Here’s a quick recap on what you should feed your betta fish:

What Human Food Can Betta Eat?

While some people swear by the fact that betta fish can eat some human foods, including peas, leafy greens, and mango, we advise you against feeding such and other human foods to your betta fish.

This species is carnivorous and have short gastrointestinal tracts that didn’t evolve to digest any sort of plant-based foods. While it’s possible that your betta fish would eat some human food, there is no reason why you should attempt feeding it.

Your fish can get all the necessary nutrients from betta fish pellets. If you want to go above and beyond, occasionally treat it with other foods that we’ve talked about previously, but never consider sharing a bite you’re having with your betta fish.

How Often Do You Feed a Betta Fish?

Generally, feeding your betta fish once a day is sufficient. However, feeding it twice would be better, because eating less at once would minimize the risk of health problems like constipation.

Some owners even feed their betta fish three times a day, but that might be difficult to fit into a busy schedule while working a 9-5 job. It’s also fine to feed your fish once one day, and twice the next day. All you have to focus is on feeding your betta fish at least once a day.

How Long Can Betta Fish Go Without Food?

In general, a well-fed betta fish can survive for as long as 2 weeks without any food. However, you should never keep it starved like that, as it isn’t healthy. What’s healthy though is fasting your fish one day per week.

It will guarantee that all the food in its gastrointestinal tract is digested, and keep GI problems like constipation at bay. It’s best to pick one day a week to be the fasting day and stick to it, so you don’t ever mix up whether your fish has fasted this week or not.

Finally, if you have to leave for the holidays, it’s fine to leave your fish without any food for two or three days. If your fish was always fed and is healthy, going without food for a couple of days isn’t going to do any harm.

Feeding betta fish is as straightforward as it gets. Simply feed it two pellets a day and that’s it. If you want to feed it twice a day, give one pellet per feeding. If you’re treating your fish with freeze-dried, frozen, or live food, see each worm/shrimp/shrimp as one unit of food.

Here are some things that you shouldn’t do when feeding your betta fish:

There are many rules of thumb like “give betta as much food as it can eat in X minutes”. You shouldn’t follow such guidelines because betta fish can, and do overeat if there’s too much food present. It will result in gastrointestinal issues and your fish might get sick, or even worse.

Don’t Put Too Much Food Into the Aquarium

Always pick out uneaten food to prevent it from rotting. Decomposing organic material creates ammonia, which can build up in the water and seriously harm your fish, and in some cases, even kill it. So don’t give it too much food all at once, and feed your fish slowly.

If you have to leave for a couple of days, don’t use any sort of slow-release fish food, also called weekend food blocks or weekend feeders. Such products don’t work as intended, and simply start rotting and destroying the quality of the water.

What To Do If My Betta Fish Doesn’t Eat Food?

It’s a very common occurrence that betta fish either spits out the food after eating or doesn’t eat it at all. If you notice such behavior in your betta fish, don’t worry. Most betta fish enthusiasts have faced such problems.

First of all, spitting out food isn’t always a problem. Some betta fish spit out the food and eat it later after it gets softer in the water. If your betta fish doesn’t eat the food it has spitted out or doesn’t eat it in the first place, then you should try feeding it something else.

Betta fish are among the most popular fish species kept at home, and feeding them isn’t something that should give you a headache. Simply feed it betta fish pellets and occasionally treat it with more nutrient-dense foods like freeze-dried worms.