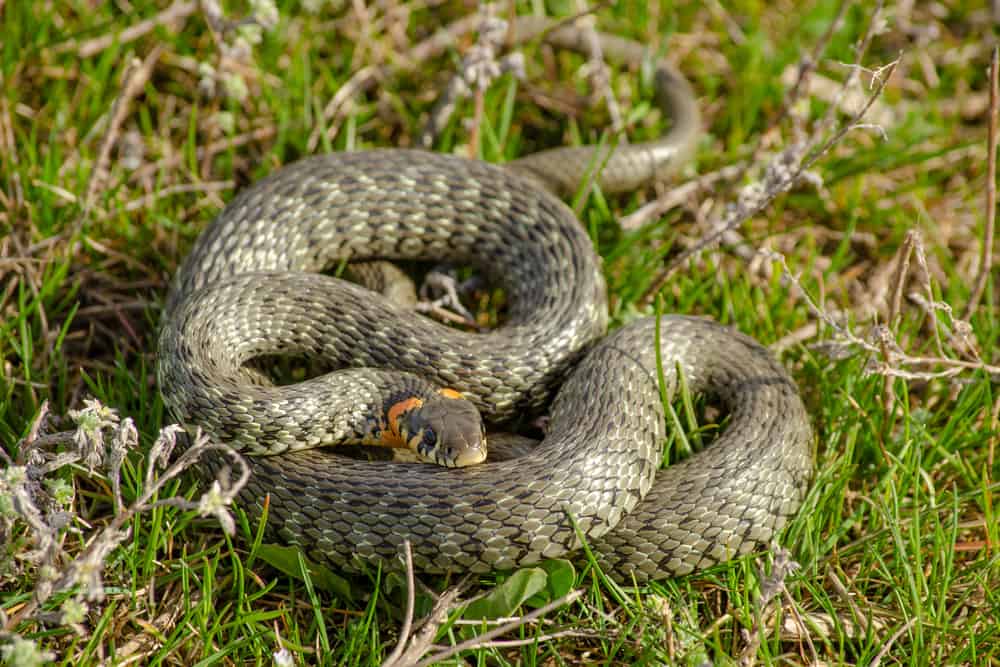 There’s always an epic story to tell after the encounter. If you’ve ever come across a Grass snake, you know how interesting it can be. You probably know them for their award-winning acting skills, especially when playing dead.

So, what do grass snakes eat? Let’s explore this in detail.

They mainly inhabit open woodland areas and their borders that offer adequate shelter and sufficient opportunity for thermoregulation. That is, they can maintain constant body temperature even when the surrounding temperatures differ.

Grass snakes are mainly found in Europe in Scandinavia and southern Italy. Also, you can locate them in other parts of the world, such as North-western Africa and the Middle East.

The snakes are primarily brown or dark green with a whitish or yellow collar behind their heads, hence the alternative name, ringed neck. Their colors also range from black to grey, with the darker shade being more widespread in colder regions. You can also find them near ponds.

Grass snakes mate in spring when the environmental temperatures are favorable. Females lay between 8-40 eggs in batches that hatch in about 10 weeks.

For the eggs to hatch, the environmental temperatures should range between 21-28oC (70oF-82oF) in areas of high humidity. Baby grass snakes are 18 centimeters (7 inches) long and are immediately independent.

When in danger, grass snakes have several ways to keep predators at bay. The most basic defense mechanism they employ is hissing and striking their opponent with their head. Grass snakes hardly use biting as a form of defense.

In some cases, grass snakes will secrete blood from their mouth and nose to convince predators that they are dead. This form of defense is known as autohaemorrhage.

Their most peculiar defense mechanisms involve raising the front section of their body and flattening their heads and necks to resemble a cobra’s hood to intimidate predators.

What Do Grass Snakes Eat In The Wild?

Grass snakes tirelessly search for prey, typically on water edges, using their sight and smell to identify and keep track of them. You can also spot them lying still among Lilly pads stalking the fish.

Unlike their snake cousins, they swallow their prey whole without suffocating them using constriction. That is, without squeezing them before consumption. Their prey is usually nothing above 180 centimeters. Grass snakes will only feed on live prey.

Grass snakes usually begin by swallowing the heads of their prey first. But the direction the prey faces upon ingestion varies among different types of prey items eaten by the snake.

The size of prey that grass snakes eat increases with the size of the snake. That said, the larger snakes still prefer feeding on smaller animals.

Prey items on the grass snakes diet include:

Grass snakes will consume juvenile chicks like moorhens to supplement their diets. Female grass snakes occasionally feed on mice and voles more than males, but on rare occasions.

Baby grass snakes, otherwise known as hatchlings or neonates, feed on tadpoles, small fish, and new generations of frogs and toads. Some are even said to feed on earthworms, but this is yet to be proven.

All snakes are fascinating, grass snakes included. Countless facts make them unique and differentiate them from others of their species. Some of these include: 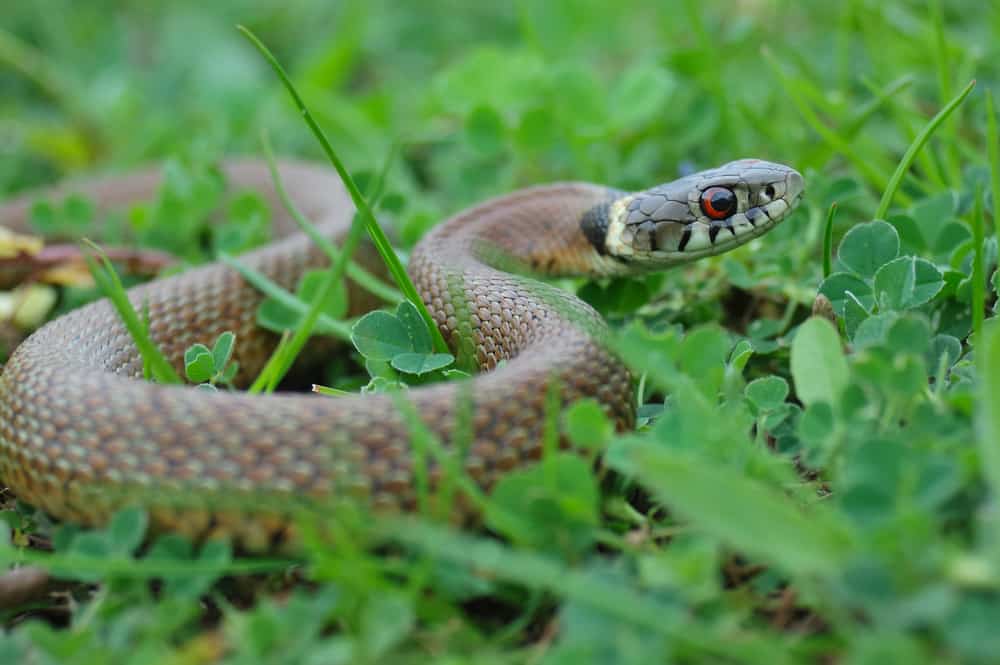 Can grass snakes be kept as pets?

No, you can’t keep them as pets. Grass snakes have not been domesticated anywhere in the world so far. It is only in zoos that they are kept for conservation. It’s near impossible to provide the conditions grass snakes require in the wild in captivity.

Wild-caught snakes might also carry parasites or cause diseases. It’s not recommended to keep a grass snake as a pet.

What should I do if I find a grass snake in my garden?

In such a situation, take your children and pets (if any) indoors as they face higher risks of being attacked. Allow the snake to slither through the garden and take note of its size, pattern and double-check to be sure. It is likely to be a slow worm or a grass snake.

Grass snakes and slow worms are both native to Europe, and they resemble one another. Hence it’s slightly difficult to differentiate the two. Luckily, both don’t pose a threat to humans.

How do grass snakes live in the wild?

In the wild, grass snakes live solitary lives. Only until the mating season do they come together in large groups to pick a mating partner and find a location to lay eggs.

Are grass snakes active at night?

Grass snakes are diurnal, meaning they are mainly active during the day and at dusk. They spend the better part of their day basking in the sun either from the ground or on trees.

Grass snakes usually find a safe spot to sleep at night as they fall prey to many animals, most of which have food night vision.

Grass snakes are skilled animals, and some might even say talented. They swim, they act, and they even look the part. These snakes occupy wet areas where they highly thrive, and their favorite meal on the menu is amphibians.

There you have it. ‘’What do grass snakes eat?’’ should never be a tricky question for you to answer.