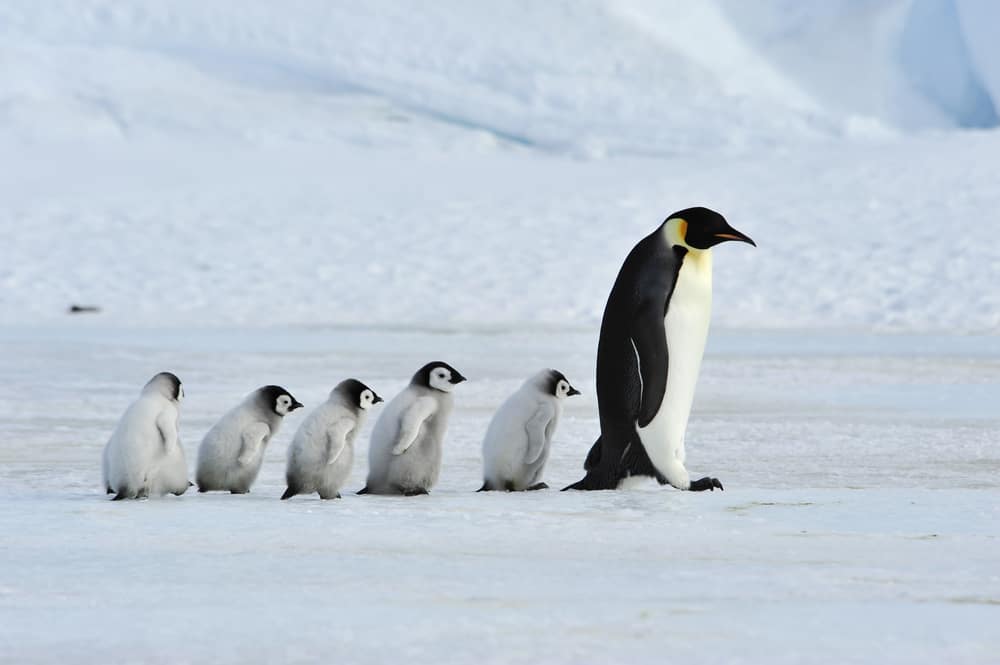 Yesterday, I stumbled upon the Penguins of Madagascar movie on TV and decided to watch it. Personally, it is still one of the funniest animated movies ever, but it also prompted me to learn more about these cute and goofy birds.

Penguins are one of the most popular and recognizable animals in the world. They are a huge attraction in zoos, and many movies, comics, and TV shows feature penguins. There is much more to penguins than just their cuteness, so keep reading to learn more!

Penguins are aquatic flightless birds that have distinct black and white bodies. There are between 17 and 20 living penguin species, with many more being extinct.

Almost all penguin species inhabit the Southern hemisphere, except for the Galapagos penguins, who live on the Galapagos islands. It is a common misconception that penguins only live in cold regions and that they live in the Arctic and Antarctica.

While there is a huge population of penguins in Antarctica, there are no penguins in the Arctic. Also, not every penguin species lives in cold climates, as some live in temperate zones.

Penguins can be found in countries and continents, such as Antarctica, Angola, Namibia, Argentina, Chile, Australia, South Africa, and New Zealand.

The most distinct penguin feature is their plumage that’s black on the backside and wings, and white bellies and chest area. Since they don’t fly, their fings have evolved into flippers. Penguin’s body shape is fusiform, tapered on both ends.

Their heads are large and their necks are short. Their tails are wedged, stiff, and short. Penguins’ legs have webbed feet and they are positioned far back on the body, to provide the stability when the penguin is standing upright.

Some penguin species have prominent crests on their heads, and some even have patches of yellow feathers. There are also isabelline penguins, the penguins with brown feathers instead of black. They live considerably shorter than “normal” penguins because their camouflage isn’t as efficient.

Penguins have a sharp beak called a bill. They use their bills to catch and kill their prey.
Also, penguins have barbed tongues and mouth roofs, which enables them to swallow their prey more easily.

Almost all penguins breed in large colonies, except for the yellow-eyed penguin and Fiordland penguin. Couples are monogamous for one mating season, and some species will stay monogamous for several seasons or their whole lives.

When the penguin chicks hatch, they are often grouped together in large groups called creches, in order to keep them warm and safe from predators, especially when their parents went to find food.

Let’s take a look at some of the most representative penguin species: 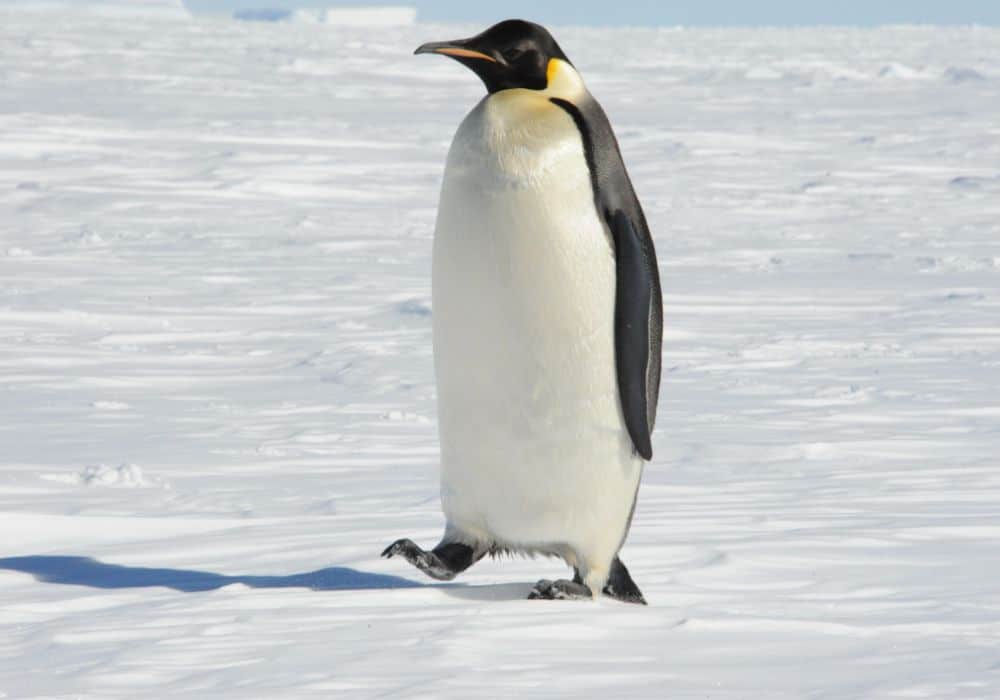 This is the only penguin species that breeds during the Antarctic winters, and male specimens are the ones in charge of eggs before they hatch, while the females go away to find food. The average life span for emperor penguins is 20 years. 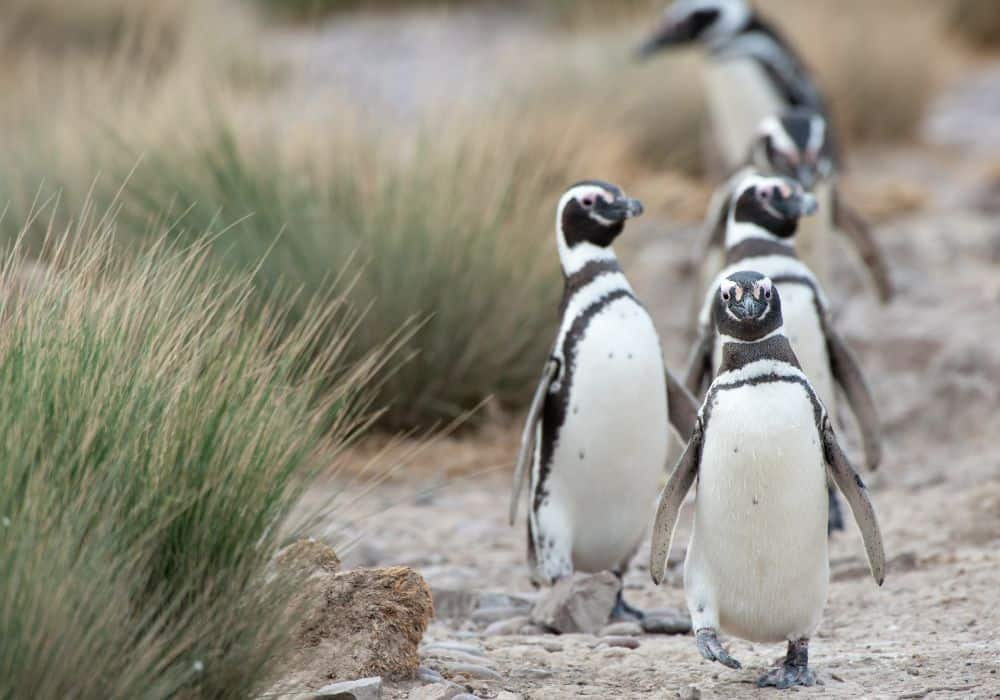 This penguin species was named after Ferdinand Magellan, who first saw these birds on one of his numerous trips. Magellanic penguins live in South America. 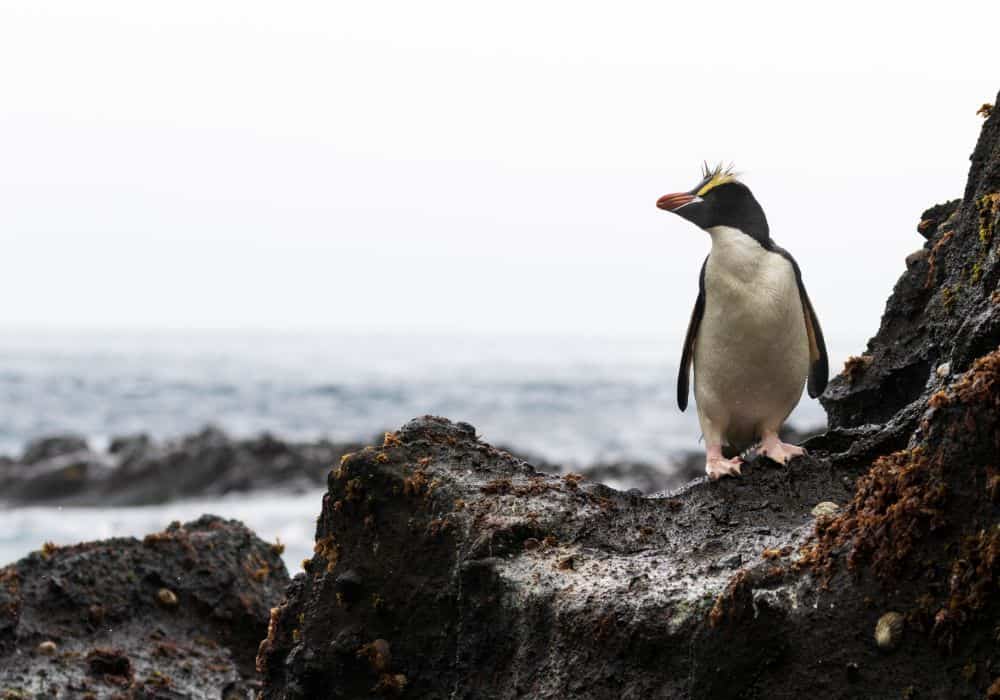 These penguins got their name because of their unique appearance, as they have a yellow brow stripe that extends over the eye and forms an erected crest. Erect-crested penguins are small to medium-sized penguins.

These penguins are endemic to New Zealand. On average, erect-crested penguins live for 15-20 years.

What Do Penguins Eat?

Penguins are carnivorous and mostly live on piscivorous diets, which means they usually feed on small fish. They will also catch and eat some other aquatic animals. Different penguin species also have different food preferences, to avoid competition between them.

What Do Penguins Eat In The Wild?

Of course, to a large extent, the penguin’s diet will be affected by its habitat and available food sources. For example, the emperor penguin will feed on Antarctic silverfish, hooked squid, glacial squid, and Antarctic krill.

Magellanic penguin feeds on squid, cuttlefish, and krill, and it also ingests saltwater along with their prey. This penguin has salt glands that will get rid of the excess salt.

Erect-crested penguin has a similar diet to other crested penguins (Fiordland penguin, Royal penguin, Snares penguin, Macaroni penguin, and Rockhopper penguin), and it feeds on small fish, squid, and krill.

What Do Penguins Eat In The Captivity?

In zoos, penguins have a slightly different diet than those specimens that live in the wild. They are mostly fed with frozen fish, as opposed to wild specimens that eat fresh prey. Captive penguins often eat capelin and other smelt species, herring, sardines, other fish types, and squid.

Baby penguins eat the same food as the adult specimens, but since they are too small to swallow the food whole, their parents regurgitate their food into mush and give it to their children. As the chicks grow, they slowly become capable of eating on their own.

Most penguin species endure periods of fasting while they wait for their younglings to hatch. Usually, one parent will stay to guard the egg and provide it with its warmth, while the other parent goes away to feed. Every few days or weeks, the parents switch places, and the parent who fasted now goes away to find food.

How Do Penguins Hunt For Food?

Penguins have evolved to be great swimmers, and they are even able to dive to 50-60ft (15-18m) deep into the water. They catch their slippery prey with their strong bills and swallow it whole while still swimming.

Some penguins are solitary hunters, while others prefer to hunt in groups. Galapagos penguins will often hunt along with other bird species, such as flightless cormorants, brown pelicans, masked boobies, brown noddies, etc.

What Are The Predators Of Penguins?

Penguins have many predators among aquatic and semi-aquatic animals, such as sea lions, sharks, killer whales, leopard seals, and even seabirds. Baby penguins are especially vulnerable.

There are also some introduced penguin predators, just like foxes, dogs, snakes, weasels, and cats. These predators are especially dangerous because they were introduced only recently to penguins’ habitats, and penguins didn’t have time to evolve to be able to protect themselves.

Penguins’ distinct black-and-white plumage keeps them safe from their predators. When they swim, their white bellies aren’t easily noticeable by predators in the water, while their black backs assimilate with the body of water, when observed from the bird’s perspective.

How To Feed Penguins? 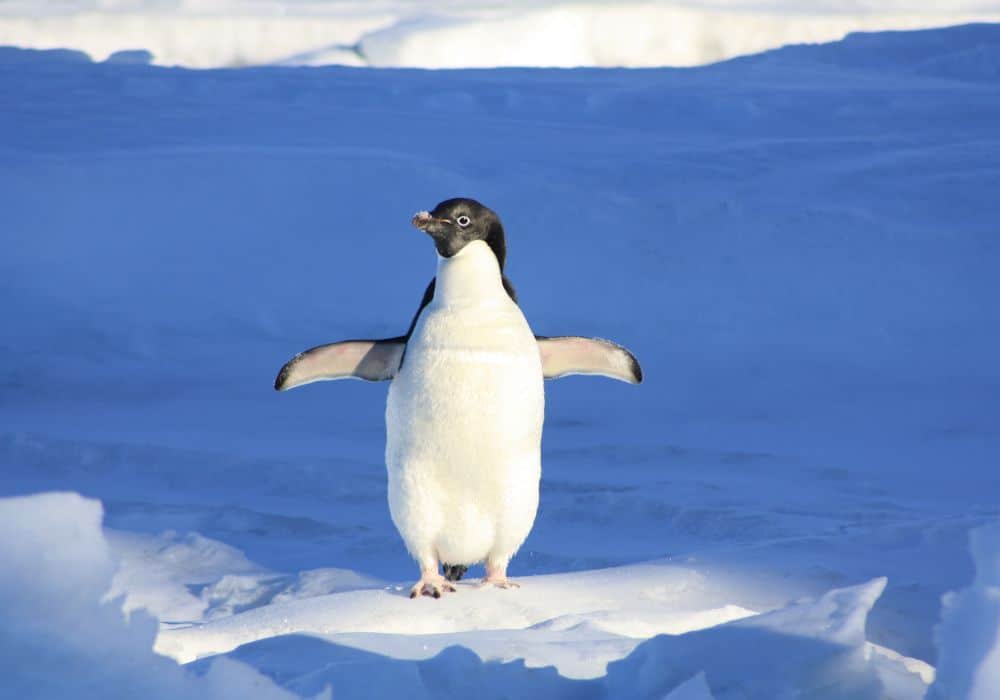 Penguins should be feed fish, krill, crustaceans, and other foods they would normally eat in the wild. The exact amount of food needed depends on the penguin’s size, as smaller penguin species can’t eat nearly as much as the larger ones.

Don’t feed them with fruits, vegetables, bread, sweets, and even other meats that don’t come from fish and other aquatic animals.

Penguins are one of the most popular and beloved animals in the world. Countless scientific studies, expeditions, and research projects were conducted to learn more about these funny animals.

Penguins feed on fish, krill, cephalopods, crustaceans, and any other aquatic animal they can catch. Different penguin species have different feeding habits, mostly depending on their habitats and prey availability.

Have you ever seen a penguin in person? Which species was it? Write more in the comments!