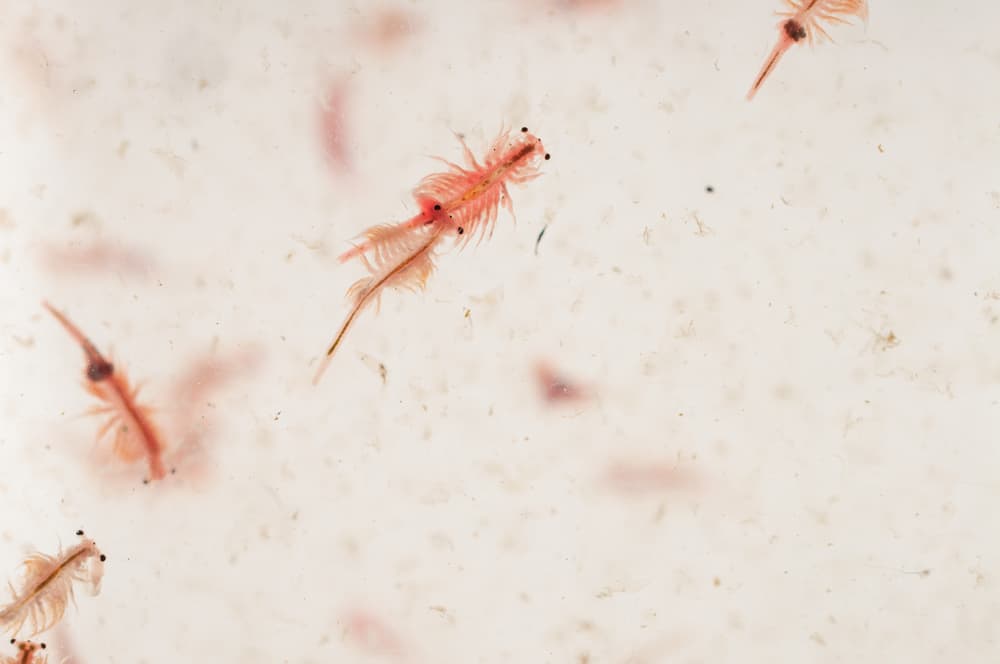 Fish food comes in many forms but one of the most nutritious and most fun is brine shrimps. Many pet owners are initially unenthusiastic about the idea of raising the pet food for their pets but brine shrimps are exceptionally easy to breed and look after, and they bring an entirely new dimension to having pet fish. So, let’s go over exactly what brine shrimps are, what do brine shrimps eat and how to take care of them.

What are brine shrimps?

Called Artemia scientifically, brine shrimp are an entire genus of tiny crustaceans that are very common zooplankton found all across the world. While not technically a shrimp, these small animals are as many crustaceans as are shrimps, crabs, and lobsters.

Regardless of which type of brine shrimp you bring home, the following base characteristics will always apply and brine shrimps as a whole are a fantastic species to breed at home for your pet food needs.

There are many unique things about brine shrimp. Sea monkeys are brine shrimp – if you were wondering why the two look similar, it’s cause they are the exact same type of animal. The term “sea monkeys” was a marketing invention to make them more interesting to kids.

The average adult brine shrimp is a little more than half an inch long or about 1.5 cm. Yet, these crustaceans have 19 separate body segments, 11 pairs of legs or appendages, as well as two different sets of eyes. Like many lizard and starfish species, brine shrimps can detach and leave behind body parts to distract predators.

Brine shrimp cysts or eggs are a big part of why these crustaceans are so easy to get and breed in home environments. These cysts can stay dormant for years, waiting for the right environment to start hatching in. this makes the eggs very easy to sell and deliver in packages for people to hatch and raised at home.
Once the Nauplius larvae have hatched, raising brine shrimp out of them is just a matter of maintaining the right conditions in your tank and feeding them right – more on that below. Of course, brine shrimp didn’t evolve that way to be more easily sold and bought but rather to be more resistant to harsh environmental changes.

Brine shrimp are so perfectly evolved for surviving that they’ve been around for over a hundred million years without needing to evolve at all. They are so adaptable that they can even survive in freshwater for over half an hour. brine shrimp eggs can survive being dried out, exposed to radiation, or even being in outer space. Adult brine shrimp can even survive in water with up to 50% salinity (salt content) even though the average salinity in the ocean is just about 3.5%.

Even though they are saltwater creatures, brine shrimps can’t survive in the world’s oceans – they only live in inland saltwater lakes. That’s because their ability to survive in high-salinity water is the main defense mechanism against freshwater would-be predators.
This defense mechanism doesn’t work in saltwater seas and oceans, however, as all predators there survive easily enough in salty water. Fortunately, there are plenty of inland bodies of saltwater such as the Great Salt Lake in Utah and many others across California, New Mexico, and others worldwide.

What do brine shrimps eat? 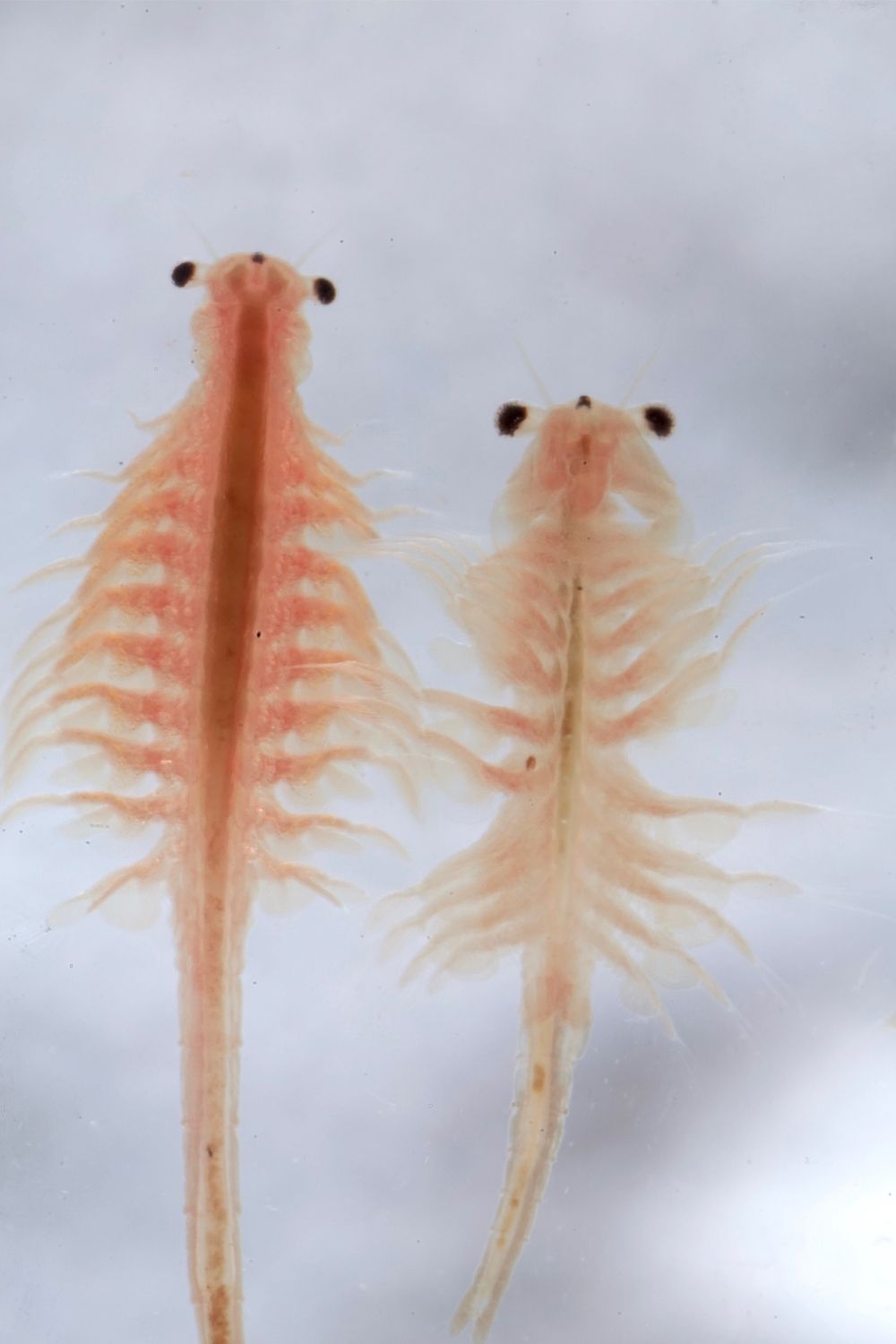 Brine shrimp are categorized as zooplankton themselves and feed on phytoplankton, i.e. plant-based plankton. Essentially, brine shrimps are filter feeders that sustain themselves by getting whatever food particles they can filter from the water that passes around them. This typically means that algae are their main food source in the wild. Such algae can include anything such as archaea, cyanobacteria, dead plant matter (detritus ), or even single-celled organisms like diatoms.

This can seem complicated at first but it actually makes feeding brine shrimp at first very easy. As a filter eater, brine shrimps are very indiscriminate with the things they eat so you can feed them with almost any organic matter as long as it is broken down into small enough particles for them to consume.

The most common brine shrimps food you’ll see people use include powdered spirulina algae, soybean powder, whey, a simple yeast solution, and even wheat flour. Even egg yolks are a wonderful brine shrimp food even though they are not plant-based.

Whether you choose to feed your brine shrimp with yolk or algae, it’s important not to overload their tank with too many food particles all at once. Not only is that unnecessary but it will turn the tank’s water foul and will ruin its oxygen levels. Instead, it’s better to drop a bit of food at a time several times a day for your brine shrimp to mop out of the water. If you’re not home too often or you don’t want to bother, you can also set up a simple drip feeder.

How to raise brine shrimps?

Raising brine shrimp is easy once you’ve got the proper setup. Here’s what you’d need:

Once you’re ready with the proper tank, lighting, and air pump for good oxygen levels and circulation, it’s time to get your brine shrimp cysts. These are very easy to buy dehydrated online or at any pet store or aquarium and will quickly hatch once you drop them in the right water condition – it usually takes as little as 15 to 20 hours.

Once the hatched eggs start turning into brine shrimp nauplii or embryos, they will first remain in an “umbrella phase” as they will hang under or around their egg shells. After about 12 more hours, the nauplii will molt and will start swimming around and eating normally – that’s when you need to start feeding them.

It takes about 14 or 15 more molts for these juvenile brine shrimp to reach adult size. This process of growing up takes about 8 days. After that, adult brine shrimp can live up to 6 months, however, if you’re raising them as fish food, they aren’t meant to live that long.

Once you’ve got a few adult brine shrimp, reproduction can begin. Females tend to produce about 10 to 11 broods of hundreds of nauplii each.

What’s great about breeding and raising brine shrimp is that all of them can just stay in the same tank – you don’t need to separate eggs, nauplii, and adults at any stage of their life cycle. In the meantime, all you need to do is keep them fed and maintain adequate and clean water conditions.

Some extra tips in this regard include:

Follow these few simple tips, feed your brine shrimp regularly and well, and the last step is to just harvest them whenever necessary.

How to harvest brine shrimp for fish food?

Harvesting brine shrimp is as simple as just getting a net of the appropriate size or a paper cup, gathering as many of the brine shrimps as you need, and tossing them in your fish tank. The first question to ask before that, however, is whether you want to harvest the nauplii or the adult brine shrimps. The main difference between the two is this:

So, now that you know which brine shrimps to harvest, let’s go over how to do it. The process is simple:

And that’s all there is to it.

There are many types of fish food out there and it’s true that you don’t need to breed brine shrimp to do that. However, there are a few great reasons to do it anyway:

Brine shrimp or “sea monkeys” are one of the most fascinating creatures out there and are both great pet fish food as well as fun pets to raise themselves. Making the extra step of setting up a separate aquarium purely as a brine shrimp hatchery so that you can feed the fish in your “main” aquarium can seem like overkill for a lot of pet fish owners but it both guarantees excellent food for your pet fish and is fun to do.

What’s more, brine shrimps are fairly easy to cultivate and raise – once you get the aeration and water conditions right and pick the right brine shrimp food, the rest is just a matter of watching them reproduce and grow, and grabbing some of them with a net to feed to your fish.