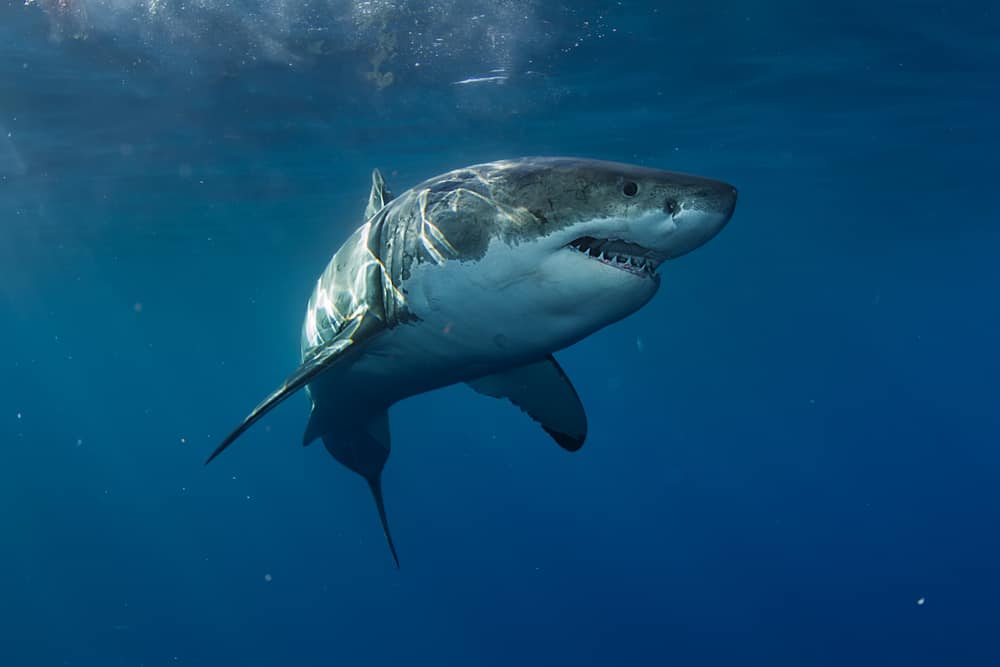 I always pictured shark attacks as something from Spielberg’s movies or from those ’80s horror flicks. However, recent headlines were filled with stories of shark attacks in tourist resorts in Egypt, the US, and Australia.

Sharks are quite notorious, and they are one of the most feared animals in the world. Still, they are not nearly as deadly as some other animals (looking at you, mosquitos). When you look past their bad reputation, sharks are quite fascinating animals, so let’s learn more about them!

Sharks are a group of large cartilaginous fish with large fins, sharp teeth, and strong tails. Fossile records proved the existence of ancient sharks 400-420 million years ago. Most sharks live for 20-30 years, but some can reach the age of more than 100 years.

Sharks live in all seas and oceans, and they generally live only in saltwater, except for bull sharks and river sharks, who can live in both saltwater and freshwater.

Sharks inhabit both deep and shallow bodies of water, they can be found in coastal areas and in the open sea, and even on the ocean floor. The deepest place where a shark’s presence was reported is 12,100 ft (3,700m).

Compared to most other fish, sharks have the specific skeleton, which isn’t made of bones. Instead, it is made of cartilage. This skeletal structure makes sharks more flexible and less heavy than other fish of similar size.

Dorsal shark fins are probably the most recognizable shark body part. When the shark swims near the water’s surface, its fin will protrude out of the water.

Another somewhat iconic shark body parts are teeth. Sharks have sharp teeth, which evolved in accordance with their feeding habits.

The size of the shark depends on its age, but it also depends on the species. The most giant shark is the whale shark, and it can reach a length of more than 40 feet (13m). The basking shark is slightly smaller, with a length of 30 feet (10m).

The great white shark is “only” 23 feet (7m) long, and the smallest shark is the dwarf lantern shark, with a body length of 8 inches (2 cm)

In terms of reproduction, sharks mature more slowly than other fish, and most species will start to breed when they are 10+ years old. The sharks reproduce when the male shark uses pelvic fins to insert the sperm into the female’s oviduct.

Most sharks are ovoviviparous, which means they hatch their eggs inside the body, and the embryos feed on egg yolk and other fluids. When they develop enough, baby sharks will get born, and they will be fully functional.

Some sharks are oviparous and they would hatch fertilized eggs that develop outside the mother’s body, while some other sharks are viviparous, which means they give birth to fully developed younglings without hatching them in the eggs first.

In some extremely rare cases, female sharks will reproduce asexually, and this usually happens when there are no males in proximity.

There are approximately400 species of sharks, and we’ll take a look at several: 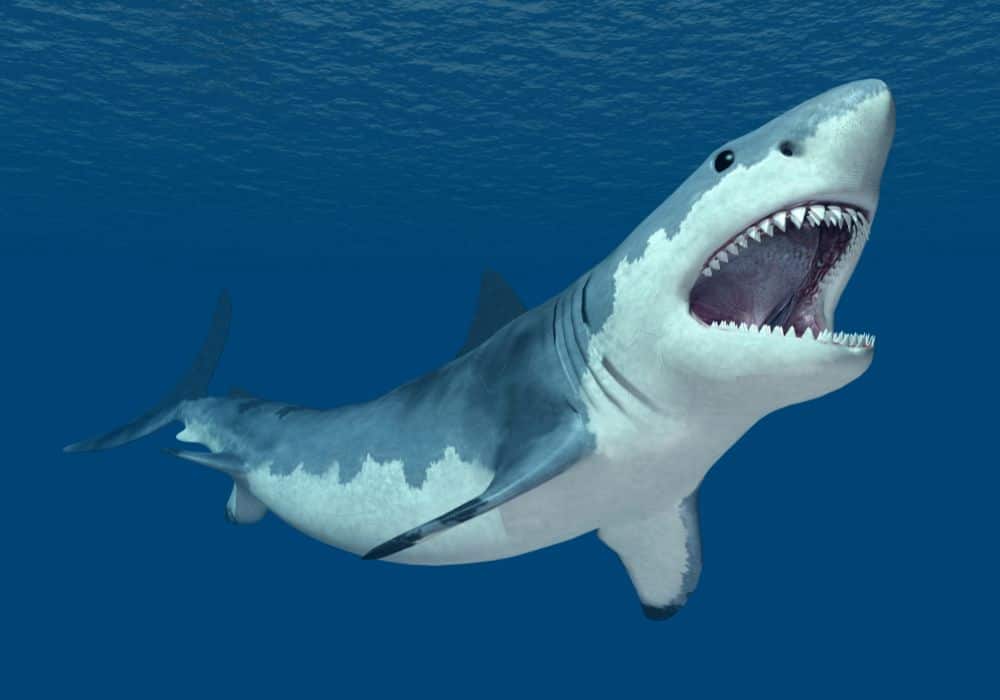 The most famous shark species in the world, probably because it is responsible for most attacks on humans. This species is quite large, can live for up to 70 years, and has no natural predators except for orca whales. The great white shark can be found in coastal waters around the United States, South Africa, Chile, Japan, the Mediterranean, and Oceania. 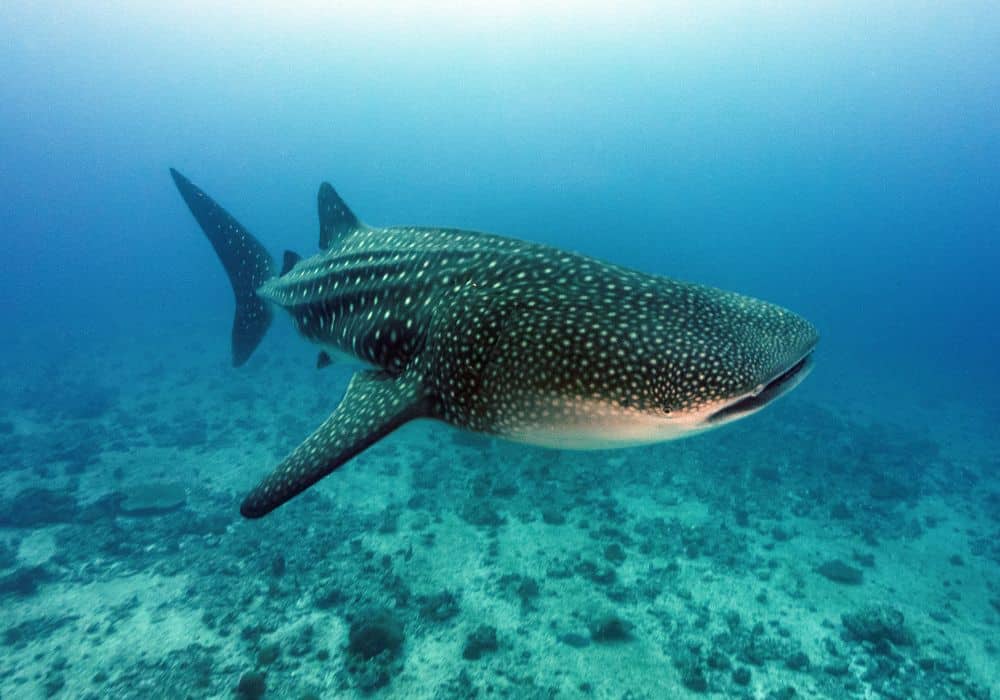 The biggest shark species, the whale shark, is also the largest fish species. It has 300 rows of tiny teeth, but it poses no danger to humans because this shark is a filter feeder and relatively docile. Not much is known about this shark, but its estimated lifespan is between 80 and 130 years, and it inhabits tropical and warm-temperate seas. 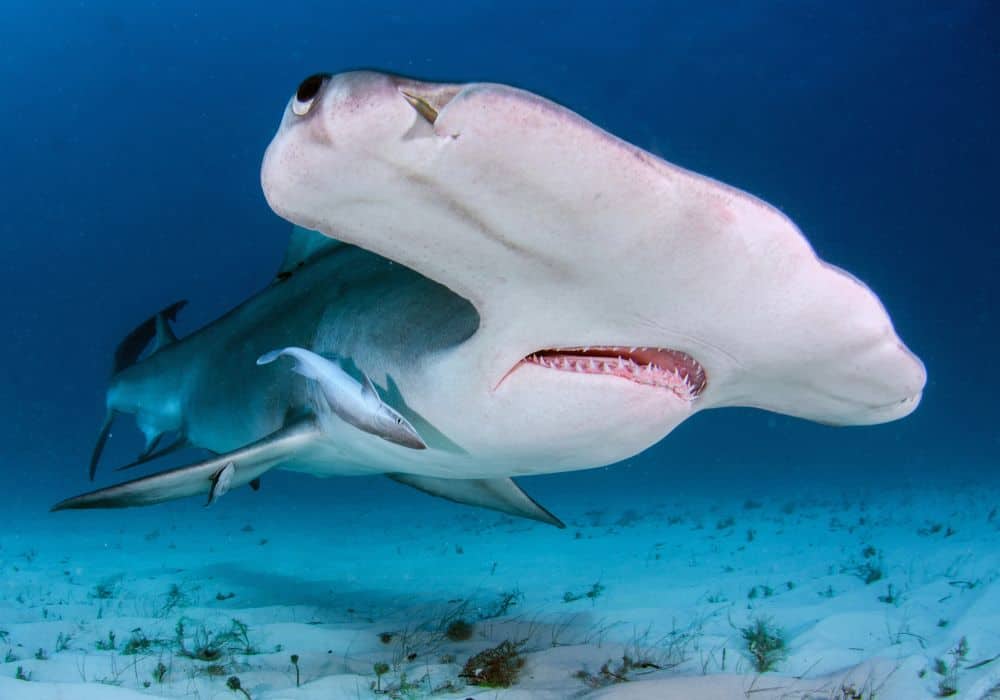 These sharks got their name because of their specific heads, which have a hammer-like appearance. This head shape enables hammerhead sharks to have a 360° vision. Hammerhead sharks live for 40-50 years and inhabit warm coastline waters.

Tiger sharks earned their name on account of the vertical stripes on their bodies. Tiger sharks are the second largest predatory shark species, right after the great white shark. They live in tropical and subtropical waters all around the world.

This species is a deepwater shark, rarely seen by humans. It belongs to planktivore sharks, which feed on plankton and other small food particles. Megamouth shark lives in the deep waters of the Pacific, Atlantic, and Indian Oceans.

What Do Sharks Eat?

What Do Sharks Eat In The Wild?

Most shark species are carnivores, but whale sharks, megamouth sharks, and basking sharks are filter feeders, which means they feed on plankton instead of hunting the prey. These species have small teeth because they don’t need them to kill the prey.

Since carnivorous sharks are basically apex predators that don’t have any real competition for food, they can enjoy a varied diet. Sharks will eat anything they can catch and kill, and that includes other fish, crustaceans, seals and sea lions, mollusks, squid, octopus, rays, stingrays, sea turtles, porpoises, dolphins, and other sea creatures.

Food choice is determined by the species and size of the shark. Smaller shark species will choose smaller prey, such as various small fish, squids, crabs, lobsters, shrimp, etc.

Large species will feed on various marine mammals, large fish, such as tuna and mackerel, and even seabirds.

What Do Sharks Eat In The Captivity?

Sharks proved to be quite high-maintenance when kept in captivity, with many of them being unable to survive for more than one year. They require an appropriate enclosure that will be maintained regularly, and they also need to be fed properly.

It is important to feed sharks with marine fish. Otherwise, they can suffer from an omega-3 fatty acid deficiency. Also, frozen fish often loses the necessary nutrients, so the shark needs to be given vitamin B supplements.

Of course, each shark species has unique feeding habits, and they should be fed accordingly.

What Do Baby Sharks Eat?

Since baby sharks are independent from the moment they are born, they don’t have any specific dietary requirements. They will eat the same things as the adults, but of course, they won’t be able to hunt large prey, at least until they don’t grow up.

The diet of baby sharks mainly consists of small fish, shrimp, crabs, squid, lobster, and any other animal they manage to catch and kill.

How Much Do Sharks Eat?

The amount of food one shark will eat in one day mostly depends on the shark’s size. In general, sharks eat between 1 and 3 percent of their body mass each time they hunt. However, that number may vary, and it can be up to 10%.

Sharks in captivity are mostly overfed, and they eat every day, while the sharks in the wild often eat every few days. Although they are skilled hunters with a strong bite, sharks can experience digestion problems if they eat too often.

How Do Sharks Eat?

Those sharks that are filter feeders have specifically evolved so that massive amounts of water are filtered in their mouths, leaving only the plankton and other tiny animals.

On the other hand, carnivorous sharks usually swallow their prey whole, or they tear it apart with their strong jaws and then swallow the pieces. Some sharks chew their food, such as cookie-cutter sharks, which use their sharp teeth to slice off pieces of meat from their prey.

What Are The Predators Of Sharks?

Unsurprisingly, sharks don’t have many predators. Their biggest enemy and the most dangerous is the orca, also known as the killer whale. Killer whales are especially interested in sharks’ livers. Sharks are said to avoid areas where they have seen killer whales for several months or more.

Bigger sharks have been spotted feeding on smaller ones. They will resort to “cannibalism” when other food sources are scarce.

Of course, we humans are one of the most dangerous predators in the world. Every year, around 100 million sharks are killed. Sometimes, humans kill sharks because of their meat and fins, which are considered a delicacy. They are also killed for their cartilages, skin, and liver.

Also, sharks are often killed because of fear and prejudice, even when the shark species in question isn’t dangerous for humans.

Instead, sharks prefer to eat other fish, sea lions, seals, dolphins, squids, lobsters, plankton, octopi, mollusks, crabs, and even other sharks. However, sharks can and will attack humans on rare occasions, and such encounters often end tragically.

Are you scared of sharks? Have you ever seen one in person? How do you feel about swimming with a shark nearby? Write in the comments!