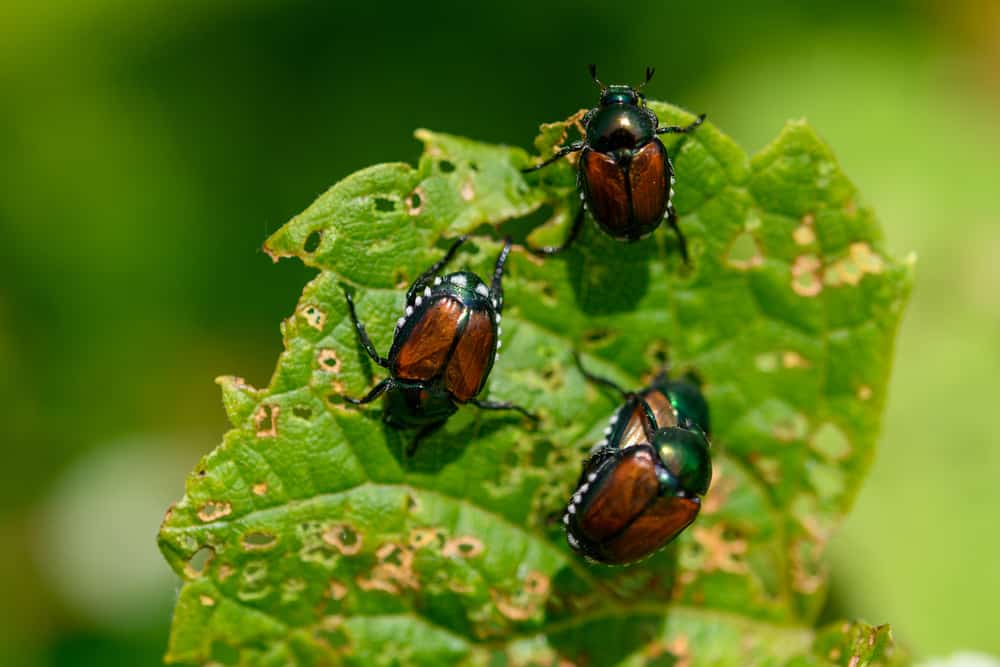 There are many pests and troublesome insects homeowners have to watch out for nowadays. The list is constantly growing too and Japanese beetles are climbing it rather quickly. Often found in the eastern United States as well as Japan, their country of origin, these beetles are slowly making their way westward through the rust belt.

But why are these beetles such a problem? Let’s go over what do Japanese Beetles eat, how much damage they can cause, and how to stop them below.

These small and sort of “standard-looking” beetles are proving to be a challenge for many eastern states in the US and a newfound threat in Europe. While they aren’t as disastrous to plant life as some other insects, Japanese beetles can be a nuisance and can make short work of lawn grass turf in particular.

They have an interesting life cycle which helps their rapid spread from one area to another but they are also manageable once you set your mind to it. As with most other pests, early detection and quick action are key for dealing with the Japanese beetle, so, let’s go over everything you need to know in a bit more detail.

Adult Japanese beetles can look pretty “ordinary” if you don’t know what you’re looking at. They have the standard beetle bug body shape with a green head, and copper-brown wing covers. These metallic green beetles tend to range between 1/3 and 1/2 inches in length (0.8 to 1.2 cm) and about half that in width. There are also several white patches of hair on the sides and the tip of the abdomen.

All this makes Japanese beetles exceptionally ordinary and that’s a part of the problem – they are hard to spot and don’t look like anything too special or threatening, thus many people ignore them at first and let them spread freely on their property.

The Japanese beetle larvae and grubs, on the other hand, are tiny, white, and typically C-shaped. Usually ranging between an eith of an inch and a full inch in length, they live a few inches underground so you will have to dig a bit to find them.

Japanese beetle grubs do look quite similar to the grubs of other beetles, however, so you can get them confused. One signature trait is the tiny darker spines and hairs on the underside and tip of the abdomen.

Japanese beetles are rising as a topic in the United States because they have been steadily spreading through the country in the past few decades. As the name suggests, however, these insects actually come from Japan – northern Japan, to be specific. They can also be found in areas of north-eastern Asia and have recently been discovered in Europe too.

Mostly, however, they are a US problem. These beetles aren’t really considered a major pest in Japan and Asia as of yet since these bugs have lots of natural predators there that keep them under control.

However, Japanese beetles are a major nuisance to the lawns of American homeowners. The moderate to warm climate of the US, combined with the vast open spaces, grassy fields, large parcels of agricultural land, as well as countless identical lawns are all fertile ground for the spread of the Japanese beetle.

The initial introduction of this bug to the US was certainly an accident. The first noted sighting happened in New Jersey all the way back in 1916. The bugs or their larvae were likely brought over in people’s luggage from Japan. Since then, slowly but surely, the Japanese beetle has made its way to all states on the East Coast barring Florida, and has gone quite a bit inland too.

The first Japanese beetle in Minnesota, for example, was found in 1968. Back then, the beetle was just an incidental occurrence but now there are countless millions of this insect in almost every state in the eastern half of the country.

As for Europe, the continent as a whole managed to avoid this invasive bug for an extra century compared to the US but the first population of Japanese beetles was discovered in Milano, Italy, in 2014. Just three years later, Japanese beetles were also seen in Switzerland although it’s unclear whether they actually traversed the Alps to get there or were brought over accidentally by people.

If we do count Portugal’s Azores islands, however, the Japanese beetle can be said to have been in Europe since the 1970s. Although that’s not mainland Europe so the insects were at least isolated from the mainland for a while there. 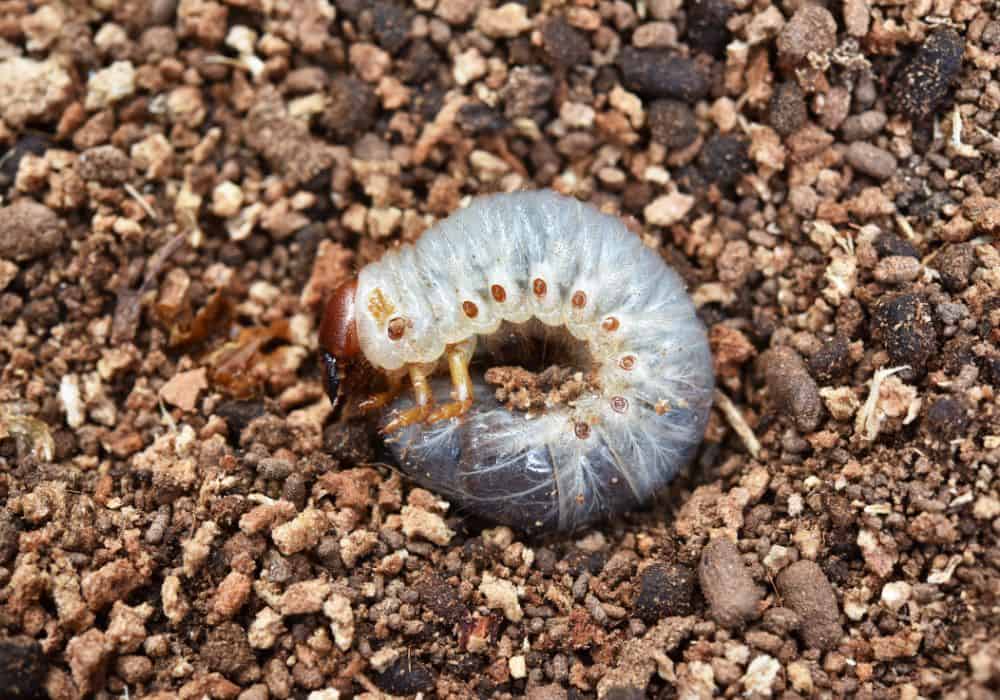 The Japanese beetle’s life cycle is fairly standard for insects of this type but the timing of the different life stages of this beetle may surprise you.

As a whole, this bug has a lifespan of about one year. The vast majority of that time they spend as larvae and grubs, however, and not as adult beetles. Once the female beetles lay eggs and hatch, the Japanese beetle larvae spend about 10 months buried underground. That’s 10 months of the 12 months total lifespan, not before it.

During that time, the larvae feed on the roots and of whatever plants and grass are above them. After that, in early spring, the larvae turn into Japanese beetle grubs and get higher into the turf. During that time they are still feeding on grass and plant roots with an even increased intensity until they are ready to turn into pupae.

After two more weeks have passed, an adult Japanese comes out of the pupae and emerges from the ground too. This usually takes place in late spring or early summer. So, if you’re suddenly starting to notice not just a few but lots of Japanese beetles on your property, that means you’ve already got a pretty serious infestation. On the other hand, if there are just a few of them, then this is likely just the first wave and you’ll get the brunt of it next year.

Fortunately, once they are in their adult form, Japanese beetles don’t last very long. The standard adult lifetime of these bugs is 30 to 45 days after which they die of “old age”. Unfortunately, these insects can get quite busy during those 30 to 45 days – a single female feeds, mates, and lays eggs once every 24 to 48 hours – that’s 15 to 45 times for about 40 to 60 new eggs per female during their lifetime.

If you look closely you can even see the process – almost every afternoon, some of the beetles in your yard (the females) will stop eating or mating and will get on the ground, bury themselves about 2 to 3 inches in the soil (5 to 7.5 cm), lay an egg, and come back out.

What do Japanese beetles eat?

The key thing about Japanese beetles is that they can eat almost every plant, especially in urban and suburban environments. They are said to feed on over 300 plant species, most of them found in a standard urban landscape. And, as they feed on plants during all stages of their life, this means that neither a plant’s leaf, flower, or root system is safe from those pests.

What are Japanese beetles attracted to?

Japanese beetles aren’t exactly “picky eaters” given how wide their menu is. There are some plants they seem to be extra attracted to, however, such as raspberries, maples, potato vine, roses, canna, and others. If you think that you can avoid a Japanese beetle infestation by just not planting those plants in your garden, you are mistaken.

What actually “attracts” Japanese beetles are good living conditions, not just the food itself. For these insects, good conditions mean a moderate to a warmer climate with temperatures of at least 70o Fahrenheit (21o Celsius) or about 85 to 90o F (29 to 32o C) in the late spring and summer.

They are also looking for moist and soft soil to bury their eggs in as overly dry and hard soil just isn’t practical for that. So, they prefer a humidity of around 60%. Although, Japanese beetles are overly sensitive to windy, rainy, and even just cloudy weather. It’s very common to see them take cover when even a few clouds appear in the sky.

So, as long as the weather and environment in your area are suitable for Japanese beetles, they will be attracted to it. After that, they will almost certainly find something to eat. 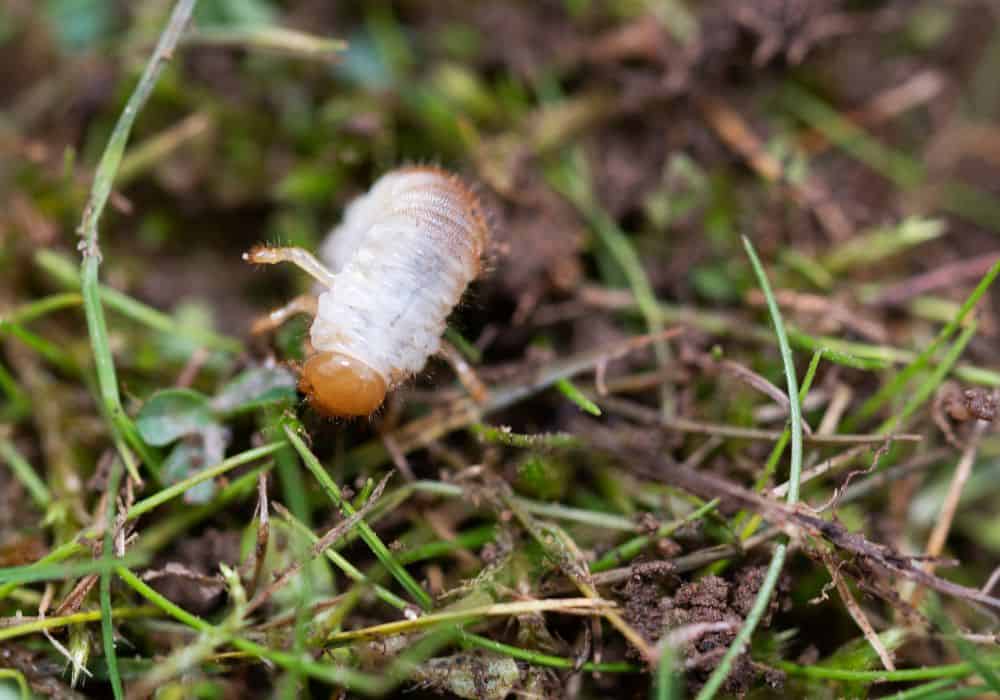 The damage Japanese beetles can inflict on plants’ leaves isn’t actually all that significant. If there are enough of them, the nubbling on some leaves can become noticeable and annoying but it isn’t something that will actively threaten most plants’ lives. That’s also not something harmful to you as Japanese beetles don’t have any poison to “infect” plants with.

When that happens, you will be able to literally and quite easily just pull the dead turf grass off the ground as if it never even had roots to begin with.

How to get rid of Japanese beetles?

Dealing with adult Japanese beetles is possible via stuff such as Japanese beetle traps utilizing pheromones, spraying parasitic nematodes, or even just tossing a bucket of soapy water on top of them.

And then, there’s the option of just introducing natural predators in your environment, to either keep the Japanese beetle population under control or exterminate them completely. Some examples of natural predators for these insects include bees, robins, catbirds, cardinals, opossums, raccoons, skunks, moles, shrews, crows, and others. The problem in the US, however, is that people often see these animals as “pests” of sorts and seek to drive them out of their habitats too.

However, all that can be seen as unnecessary for the adult beetles themselves as they don’t actually cause all that damage. It’s the grubs that are the problem as they are confined underground. So, if you know that you have grubs in your soil – either because you’ve dug some up and seen them or because you saw the laying of the eggs the previous year – you may want to treat your soil. This can be done with all kinds of insecticides, either natural or chemical – whatever is allowed in your state and is safe for your plant life, pets, kids, and family.

All in all, Japanese beetles are not an unmanageable problem but they are a pest that necessitates immediate and decisive action. A Japanese beetle infestation can grow with a staggering speed, especially since by the time people notice, the second generation of beetles is already well into adulthood.

One of the big reasons these pests are so pervasive and why their march through the US seems unstoppable is they just eat everything they encounter. With over 300 plants on their menu, Japanese beetles thrive in almost every environment they find themselves in, especially in moderate and warmer climates.

So, your best course of action if you spot even a single beetle in or near your property is to start doing damage control as early as possible. Japanese beetles aren’t the end of the world most of the time as they only tend to do “cosmetic” damage to plants and they can be dealt with even with non-chemical methods. That is, if you start dealing with them early enough.