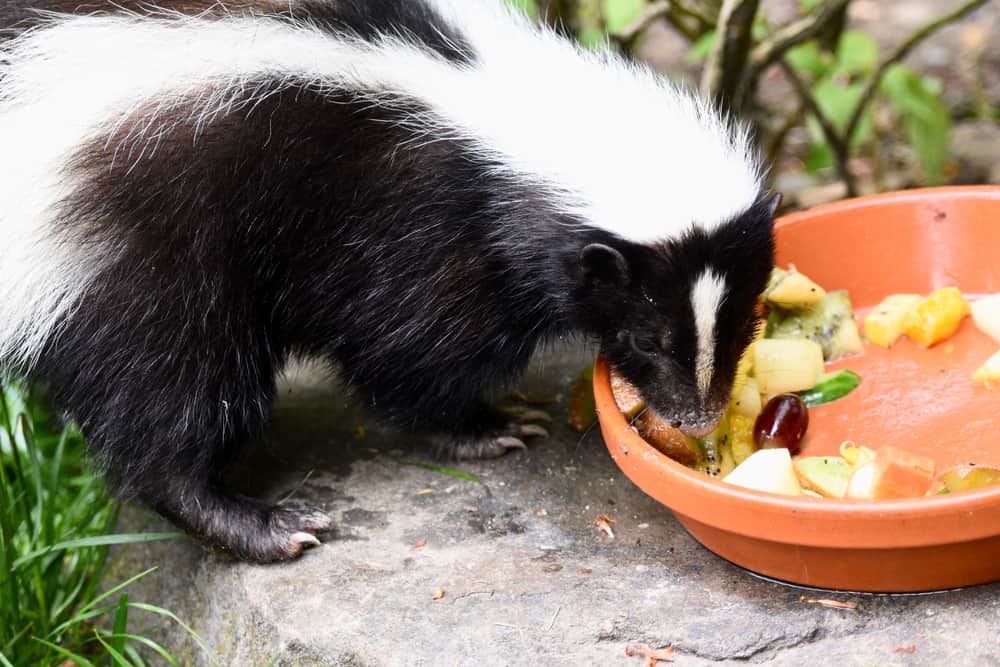 Have you heard the latest skunk joke? Never mind, it stinks. Most are known for their black and white colour but are most famous for their noxious odour.

Though most people consider skunks a nuisance, they can be beneficial because of some things they relish eating. What do skunks eat? Let’s dive in.

Not all skunks are striped or black and white. Others are brown, and others are spotted. There exist 11 different species in the skunk family. The most common being the striped skunk (Mephitis mephitis).

The polecat, as other people refer to them, are primarily nocturnal creatures. You’ll find them in forests, deserts, and even mountains, depending on the species.

Most skunks weigh 1-3 pounds and can weigh up to 15 pounds as they are prone to obesity due to poor feeding.

In the wild, they make homes of tree hollows, animal burrows, hollowed tree logs, and underneath porches. These dwelling places are usually 2 miles away from a water source. Therefore, they don’t have to wander far to quench their thirst.

If their shelters are inaccessible by any chance, skunks are known to dig burrows on their own.

Skunks are known to be defensive creatures. When in fear of threat or backed to a corner, they release a deadly spray from their backside, allowing them time to escape.

With highly coordinated muscle control, it can aim and spray at its target with precision, usually aiming for the face. Its aim is most accurate at a distance of 2 metres.

Skunks are preyed on by several animals, including; horned owls, eagles, foxes, dogs, bobcats, mountain lions, and even humans.

Finally, they are solitary creatures except for the breeding season and winter, where females den together. The male is driven off after mating. Female raise the litter of two to twelve (offspring)  kits alone. 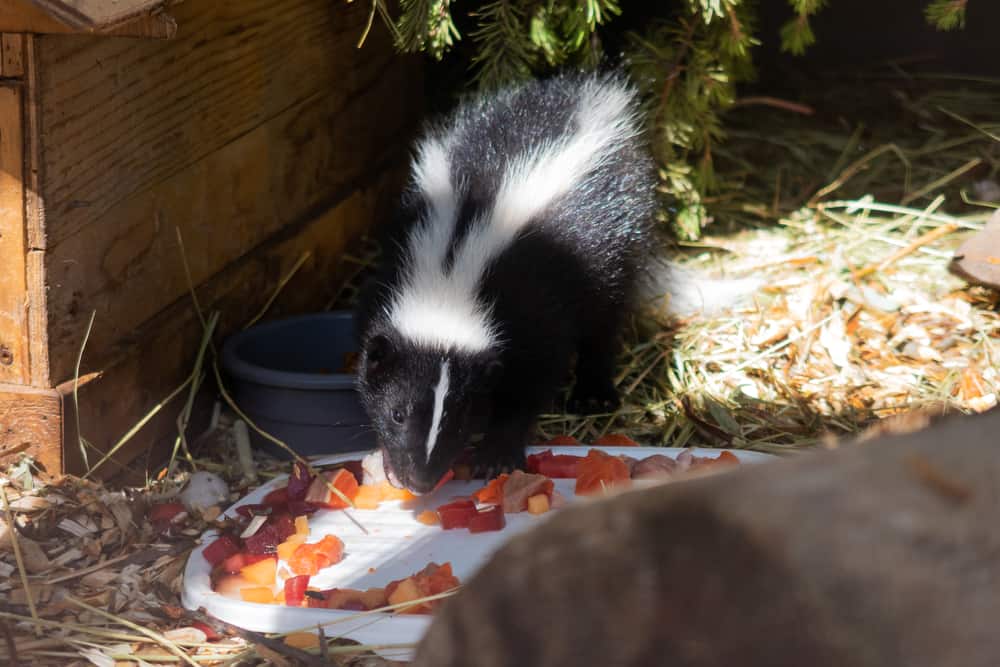 Skunks seldom exhibit this behaviour as it is only done when they are running out of options. When food is scarce, during winter, they invade inhabited areas in search of a meal.

A lot of destruction is caused along the way. Trash cans are overturned, and garbage is dug through. When pushed to the brink of starvation, skunks would eat anything, even dirt, if need be. Believe it!

As previously mentioned, skunks are omnivores, hence can eat a variety of foods. Meat, insects,  and veggies alike. Small prey consisting mainly of insects and rodents tend to top the rankings on their menu.

Because of the changing seasons throughout the year, their feeding habits tend to vary. Especially during winter as skunks don’t normally hibernate.

When it’s summer or spring, their diets mainly consist of small prey and insects. During winter, in the scarcity of these prey, they are forced to forage, and their diet primarily consists of fruits and veggies.

Their diets also vary depending on where they live, whether in deserts, forests, or urban areas.

Like people, skunks need to eat a balanced diet and exercise to stay healthy. Pet skunks usually suffer from several health problems or an early death due to poor feeding habits by the owner.

They can live for ten years in the wild, whereas domesticated ones rarely make it past five years. So, if you are ever thinking of owning a pet skunk, better keep that in mind.

If you were to open a restaurant for these stinkers, include the following items on the menu.

Throughout summer, they feed in large amounts to sustain themselves during the winter season. As you know, during winter, plenty of animals hibernate or migrate, thus creating a scarcity of prey.

During the winter season, these critters are forced to adjust their diets as they don’t hibernate. Hence, they keep feeding to stay warm and healthy. In these trying times, they forage for the following.

Roots and fruits are their favorites when it comes to eating plants.

Food scarcity during winter may cause them to invade homes and feed on food sources around the property.

Like their omnivore counterparts, skunks also feed on garbage like foxes, especially if left unattended. Trash tends to attract insects and rodents, which skunks enjoy.

Rotting foods and leftovers make up an excellent meal. Skunks target other food sources like bird feeders, compost piles, and BBQs when there is no trash around.

Foods To Avoid When Feeding Skunks 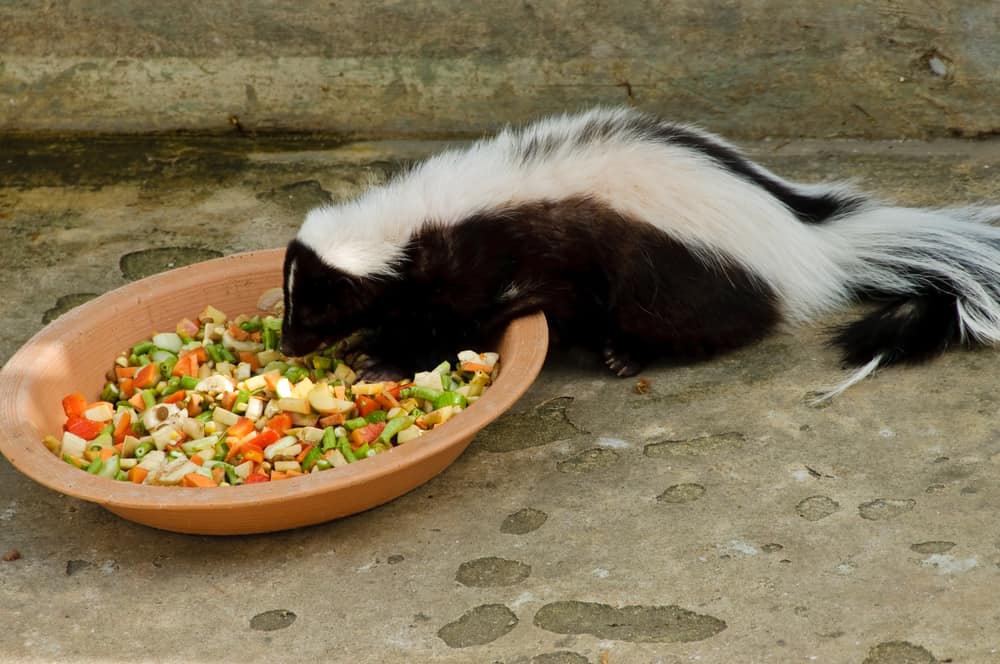 Many animals are like human beings, whereby without a proper diet or feeding habit, they are prone to falling ill and sometimes even death.

The same way you may have allergic reactions to certain foods applies to skunks as well. Also, in the same way, overeating may cause obesity, or eating less than enough may lead to malnourishment, applies to these striped beasts as well.

Here are some things to avoid feeding skunks as they may be hazardous to the creature’s health.

Just as you eat a balanced diet, so should these creatures. And exercise as well, because an obese skunk won’t be capable of running away from a predator. Neither will it be able the hunt effectively.

The perfect skunk diet should contain 60-70% protein and 30-40%  vegetables. In addition, it should also include other essential minerals and supplements.

When it comes to feeding skunks, you must be careful with what you choose to give. As discussed above, they require a balanced diet just as much as you do.

Lack of a healthy diet may lead to ‘Lifestyle diseases such as diabetes, arthritis, loss of bone marrow and can even become obese.

When feeding skunks, there are several things you should consider. These things are as follows:

Despite their terrible stench and destructive habits, skunks also prove to be helpful, thanks to their special diets containing snakes, spiders, and other insects, which help rid you of pests.

They make excellent pets and may live a long life if given a bath, tender, love, care, and healthy food.

3 thoughts on “14 Things Skunks Like to Eat Most (Diet, Care & Feeding Tips)”