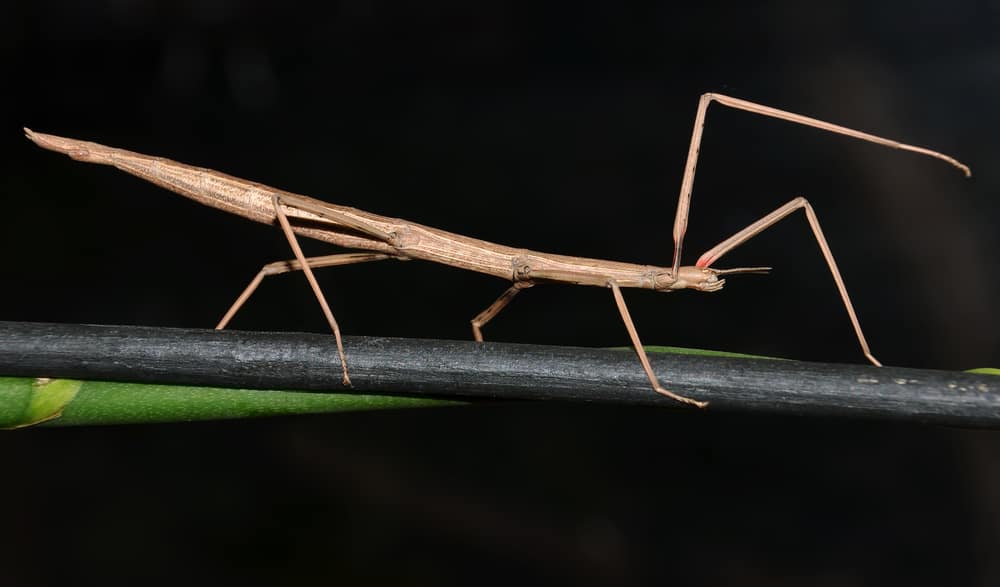 Have you ever stumbled upon a twig, only to realize it was a walking stick? Ever wonder what these unique critters eat?

Walking stick bugs eat almost any available, non-toxic leaf in their habitat. These include rose, oak, hazel, bramble, and ivy leaves, among others. Captive stick bugs may also eat leafy greens like lettuce.

In this article, we’ll dive into their characteristics, habitat, and diet to learn more about these curious creatures.

The Physical Characteristics of the Walking Stick Bugs 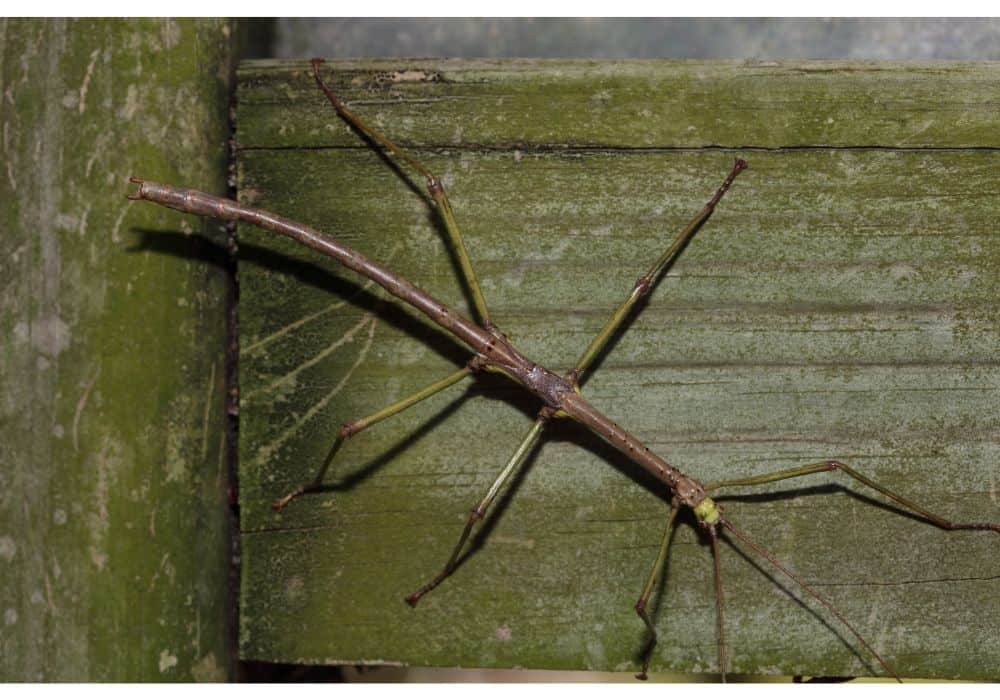 The walking stick insect is a slow-moving bug that looks like a brown or green twig with six legs. They also have antennae that are about two-thirds their length.

These insects use their stick-like appearance to avoid predators like bats, spiders, rodents, birds, and reptiles. Sometimes you’ll find them swaying side to side, much like a branch would in the wind.

Walking sticks start as eggs which look like small seeds. They hatch into green nymphs that turn brown over time.

Adult walking stick bugs usually measure between two to eight inches long, although females are much bigger than males. Some male species have wings. They don’t use them often but may fly to search for a mate.

The walking stick is considered the largest type of insect in the world. The world record-holder from Borneo measured a whopping 22 inches in length.

The Distribution, Habitat, & Life Span of the Walking Stick Bugs 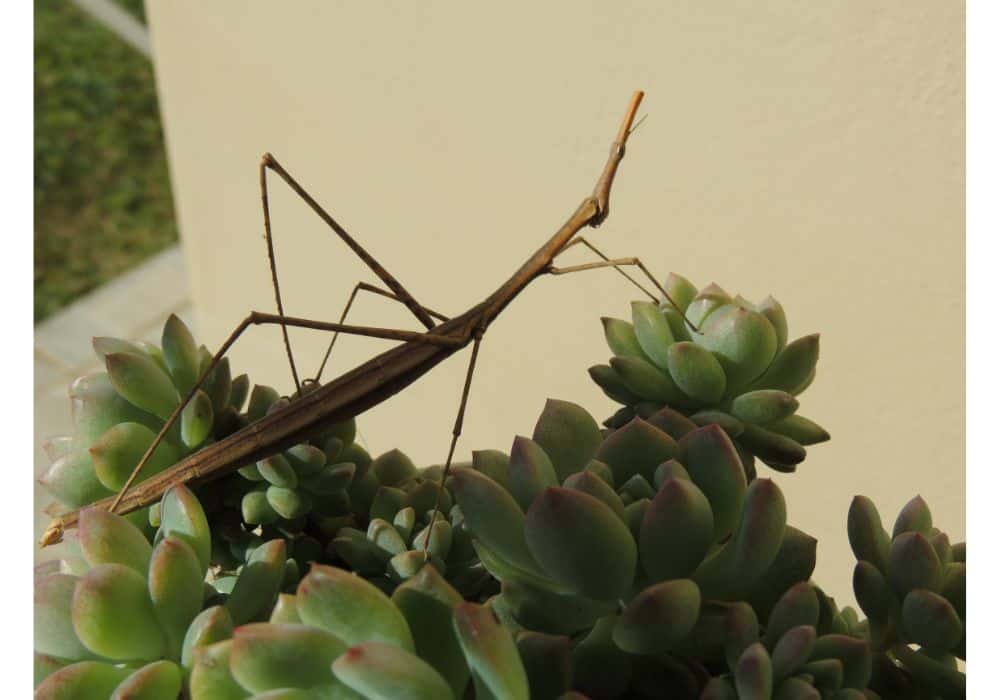 Walking sticks are strange-looking bugs, but their range, habitat, and life spans are similar to those of many other insects.

Walking stick bugs live on every continent except for Antarctica, although they do prefer warmer climates.

There are thousands of species of walking stick insects, with at least 29 found in North America.

You can find walking sticks in wooded areas and tropical forests. They “hide” on trees by simply standing still on them, appearing to be another branch. With such great camouflage, you’ve probably stood next to a stick bug various times without even knowing it.

The female will “drop” eggs in batches of 100 or more at a time. These eggs may land on the ground or in plants, usually before or during winter.

The eggs that reach the ground tend to have a cover on them that serves as ant food. When the ants carry the eggs back to their nest, they eat around the embryo, unknowingly protecting the eggs from outside predators.

After a few weeks or several months, the eggs will hatch into nymphs. These smaller, greener stick insects must grow by shedding their skin four to eight times in a process called molting. This could happen in as little as three months or take up to one year, whenever the insect fully matures.

What do Stick Bugs Eat? 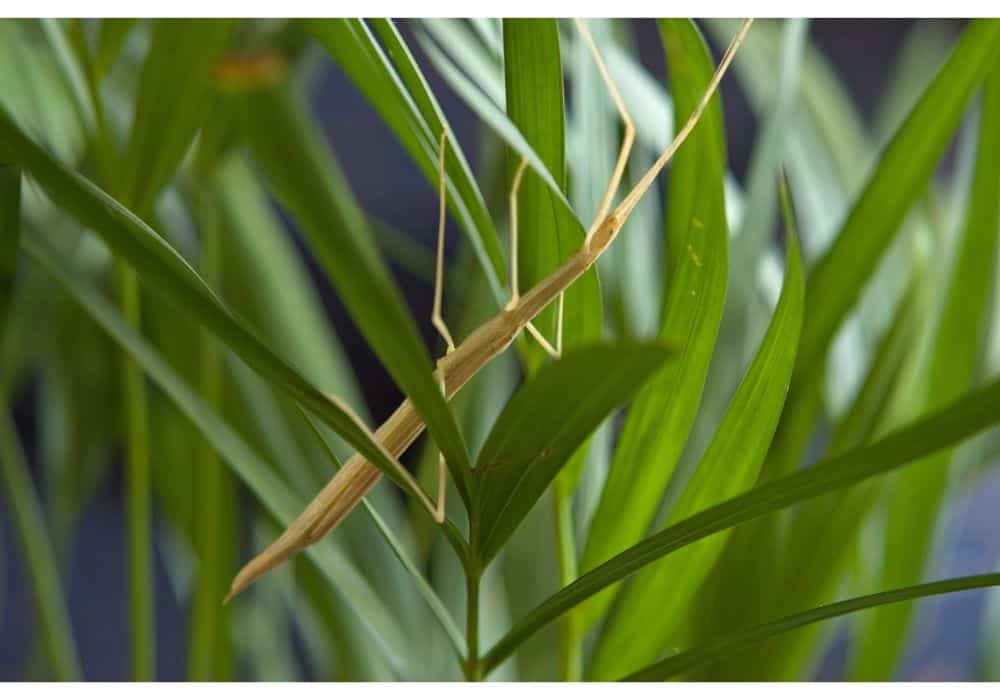 Stick bugs are strict herbivores, feeding on leaves to get the energy they need. Most stick bugs will stick to their local foliage, which means there’s a large variety of leaves and plants they munch on. In addition to leaves, they will also eat weeds, ferns, shrubs, and other parts of the plant.

All 3,000 species of stick insect eat leaves, but not always the same ones. Certain species of stick bug eat mainly one type of leave, depending on the region, while others will eat a variety.

A wild stick bug’s diet will also vary slightly from a captive stick bug or a baby walking stick.

Wild walking stick bugs will eat most fresh leaves and plants they find. They’ll tend to eat the leaf right off of the plant as opposed to scavenging for fallen ones.

Below are some of the most common leafy snacks for wild walking sticks.

If you clip enough leaves for a few days, be sure to clip the stem as well. Keep the stems in water so that the leaves stay fresh. These will only last a couple of days or so.

Captive walking sticks may also enjoy some leafy greens from the supermarket. You can try feeding them organic lettuce, spinach, or kale. Be sure to wash the produce sufficiently before giving it to a captive stick bug to avoid passing along any pesticides or chemicals that can harm or even kill the bug.

It also helps to mist any leaves or produce before giving it to your stick bug pet. This maintains humidity levels and also provides water for them to drink.

Baby walking sticks are called nymphs. They are only 1 centimeter long at birth, making them almost invisible to the naked eye. Even at such a small size, these bugs hatch and begin consuming leaves almost right away.

Nymphs will grow by molting, which is when their outer skins shed as they get bigger. Nymphs may even eat their molted skin after shedding.

How Much Do Walking Stick Bugs Eat? 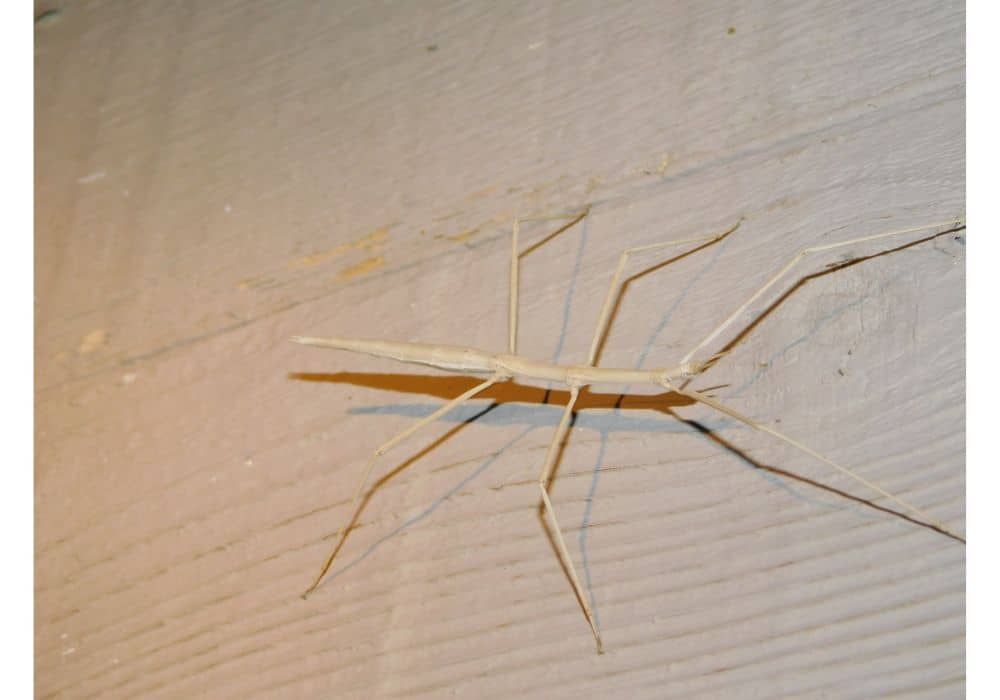 Every walking stick may be a slightly different size, therefore having a different appetite. When kept in captivity, most pet owners feed their walking stick bugs every three days or so.

Both in the wild and captivity, a walking stick bug will eat until it’s full, so you don’t have to worry about overfeeding it.

What Not to Feed a Walking Stick Bugs

Walking stick bugs can eat many leaves, but certain plants will be toxic and kill them. Most walking sticks can identify these types of threats and avoid such foods, but if you introduce a new toxic plant to their enclosure, they may take a bite and suffer the consequences.

Some common plants that are labeled as toxic and dangerous for consumption are:

These plants are seen as dangerous for children and pets, so it’s best to steer clear of feeding them to your walking stick bug too.

Keeping a walking stick as a pet is a great way to teach kids about nature and insects. To keep the walking stick happy and thriving, follow these top tips.

Walking stick bugs are curious creatures that are loads of fun to watch – especially if they’re growing and molting. Whether you have one at home or see them in your yard, most are harmless and will chug along by eating local foliage in the area.

Unless you experience a swarm or plague of walking sticks, try to avoid holding or harming them. As they move, they’ll keep plants trimmed and improve the nutrients of the soil around them. How’s that for being helpful?

How Long Do Stick Bugs Live as Pets?

While stick bugs can live for up to two years in the wild, they tend to only live 1 to 1.5 years in captivity. You can extend your stick bug’s lifespan by making sure it has enough oxygen flow, humidity, water, and fresh leaves every day.

What Can I Feed My Stick Insects?

You can feed your stick insects most leaves from your backyard, especially those from trees that are local to your area. They love oak, ivy, bramble, and hawthorn leaves in particular.

You can also feed it leafy greens like lettuce, so long as they’re organic and thoroughly washed. Make sure you don’t feed your walking stick any leaves from houseplants without researching whether or not they are toxic first.

Most walking stick bugs are harmless to humans; however, a couple of species can shoot a strong-smelling spray about a foot away. This spray could cause pain and difficulty seeing if it were to shoot into your eyes.

This is an extremely rare occurrence, so don’t panic if you run into a stick bug. Simply leave it alone and it will be on its way.