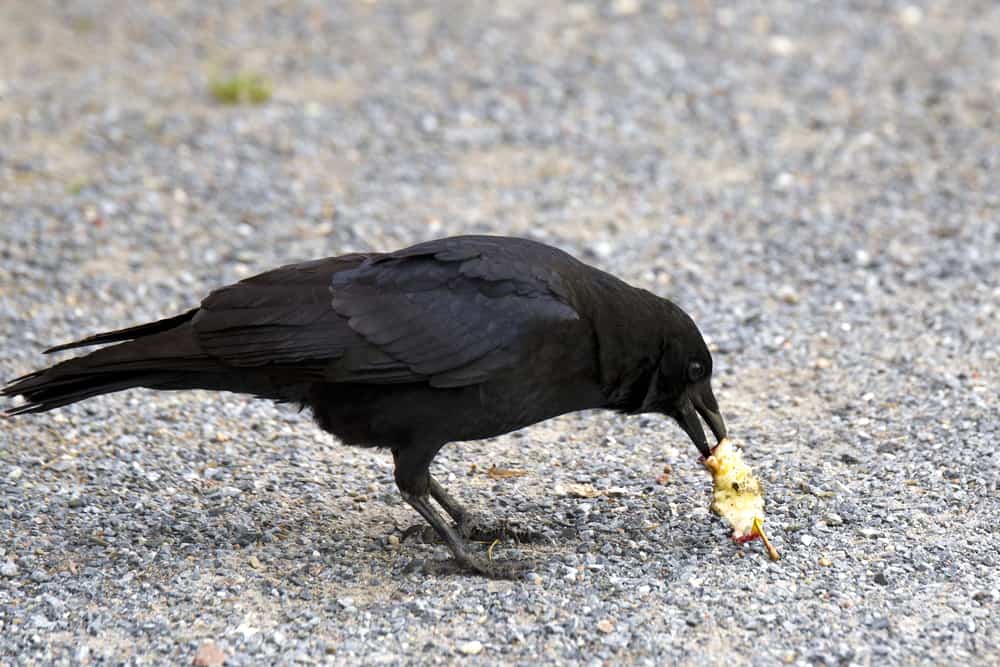 When you hear the “caw” of a crow, what comes to mind? In some cultures, these black-feathered birds are viewed as a bad omen. Research shows that crows are intelligent and social creatures. They thrive in almost any environment, including suburban neighborhoods.

But to survive, what do crows eat?

Crows, despite being loud and boisterous, for bird brains, are considered one of the most intelligent animals in the world.

They are famed for their adaptability and are even known, like human beings, to use common sense.

The New Caledonian crow uses sticks in the wild to lure ants out of their nests.

They belong to the genus Corvus along with ravens and rooks and the family Corvidae, which compromises other birds such as magpies, nutcrackers, and jays. 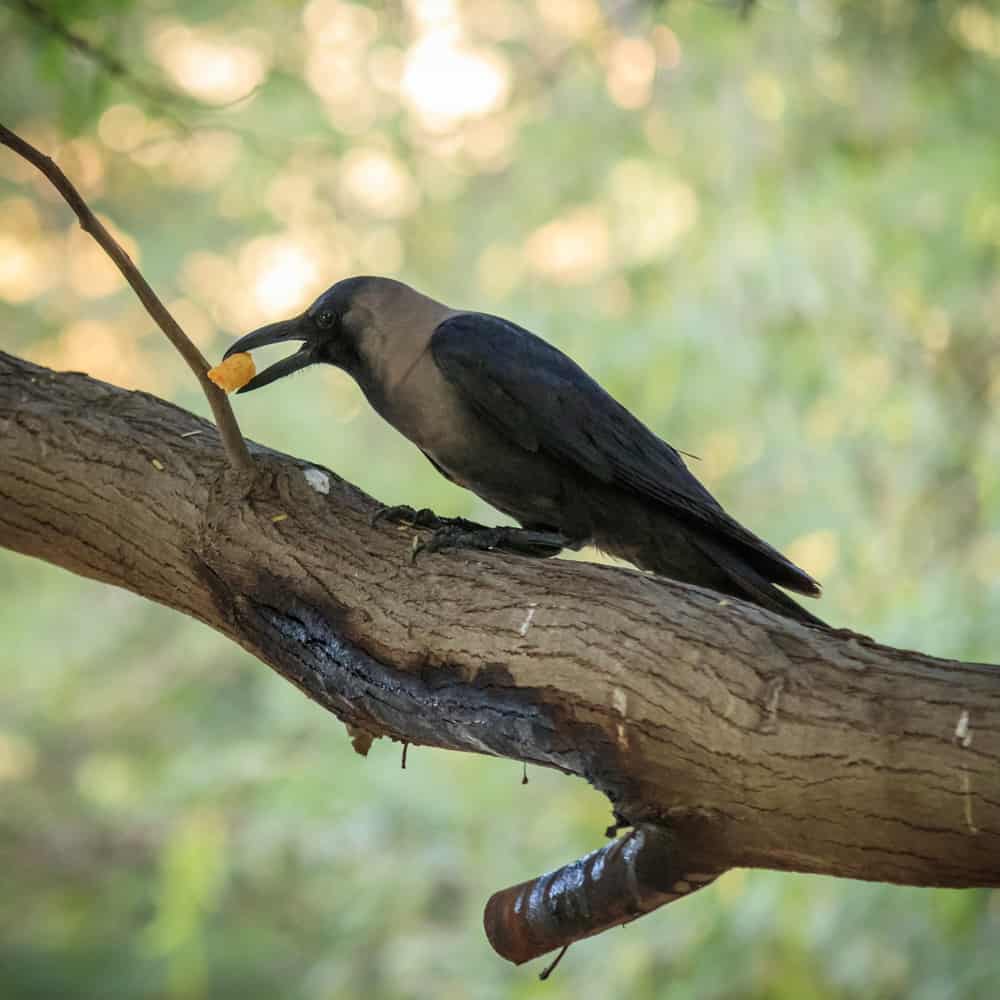 A lot of crows are reclusive, although they often scout for food in groups. An adult needs 11 ounces of food daily for sustenance.

During nesting season, they gather in large numbers to roost and protect themselves from predators. They can eat up to 40,000 grubs a day, including; armyworms, caterpillars, and other insects considered pests.

Others live in groups called “murder.” When one of them dies, the murder gathers around to mourn the deceased. Some detective work is done.

Once the crime is solved, they act together to chase the predator away in a behavior known as mobbing.

If you thought it couldn’t get any better, think again. Crows have their own language of communication, using over 250 different calls to communicate additional messages. Distress call brings other crows to the aid.

Crows only take up one mating partner for life. They exhibit a variety of breeding and incubation depending on the species. Incubation typically lasts for about 18 days, and the chicks mature at four weeks old.

Crows may live up to 13 years in the wild and up to 20 years in captivity.

What Do Crows Eat Most?

As human beings, crows are omnivores.  They consume both plant and animal-kind. Moreover, like humans, they also mind their diets and are particular with what they eat.

The following are delicacies found in the crow “menu”.

Evident from the above menu, it’s clear that crows have a wide range of meals to choose from daily. For some of these selections, they have to work hard to attain, and for others, they have to be patient, and the food shall avail itself to them.

Crows have peculiar eating behaviors that are unique to them and a few distinct animals like raccoons. Whereby they are known to dip their food into the water before eating. They do this so the food they consume doesn’t choke them. Aside from being intelligent, they are classy as well.

Foods to Avoid When Feeding Crows 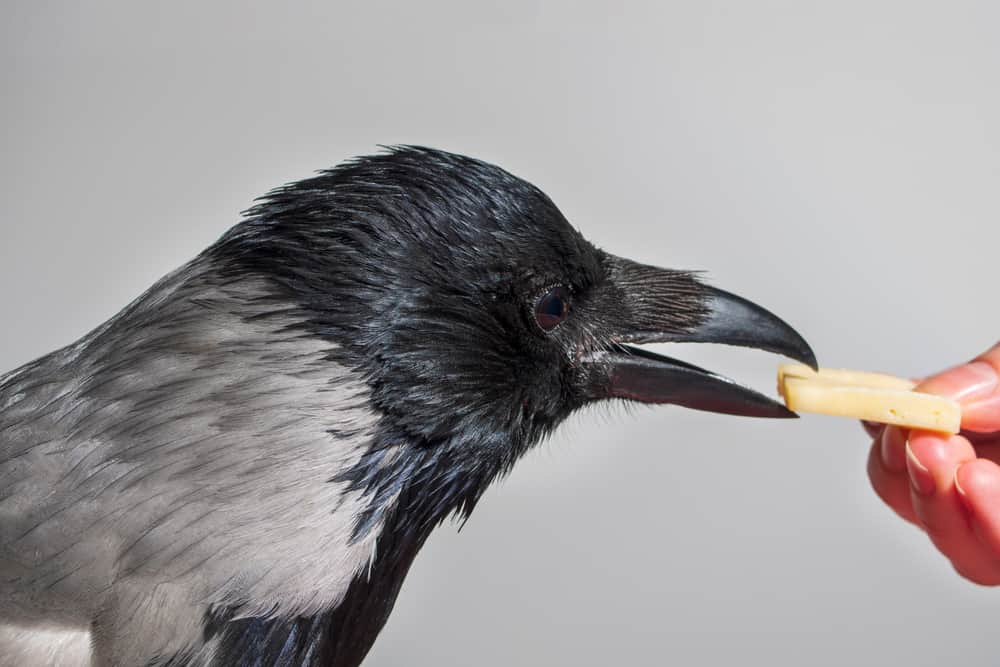 Crows, like human beings, like to watch what they put in their mouths or in this case, bills.

They are choosey when it comes to eating despite being able to feed on almost anything.

Usually, they behave this way simply because that food doesn’t tickle their fancy or may cause them harm.

And it is for that reason, when feeding crows, here are some food items you should exclude from their diets.

The above-listed food items are harmful to the Corvidae family and should not be fed to them at all costs.

In some countries, feeding crows is considered illegal. Hence before partaking in the activity either as a pass time or a hobby, you should first confirm with your local authority.

Feeding crows can be as tricky as feeding a human baby because they tend to be very difficult. As mentioned in other sections of this article, especially when it comes to feeding.

So if you’re looking to take up crow feeding as a hobby, consider the below.

You’ll know your mission is accomplished because crows eagerly descend on the food they consider to be their favorites.

Humanity might view them bad luck or as pests or tricksters. But there is no denying the outright intelligence crows possess. Be it their memory, language, or boisterous nature.

Their tendency to adapt quickly and coexist with humankind is unmatched. Crows, you can feed them, but you can’t cage them.