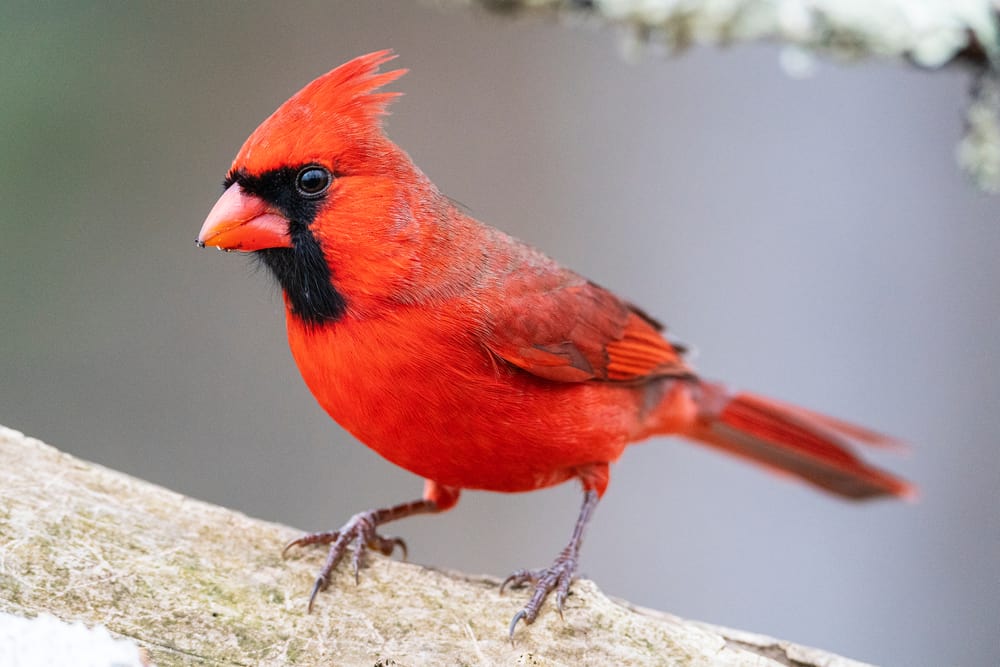 Cardinals are one of the most popular birds in North America, known for their stunning red plumage and beautiful singing. But did you know that these birds also carry a lot of symbolism, trying to inform you with the knowledge from beyond?

In many Native American tribes, cardinals are often seen as the messengers connecting our realm with the underworld, carrying messages and reminders of good fortune and love, or urging people to take action.

So if you’ve ever wondered what meaning cardinal birds have, keep on reading! 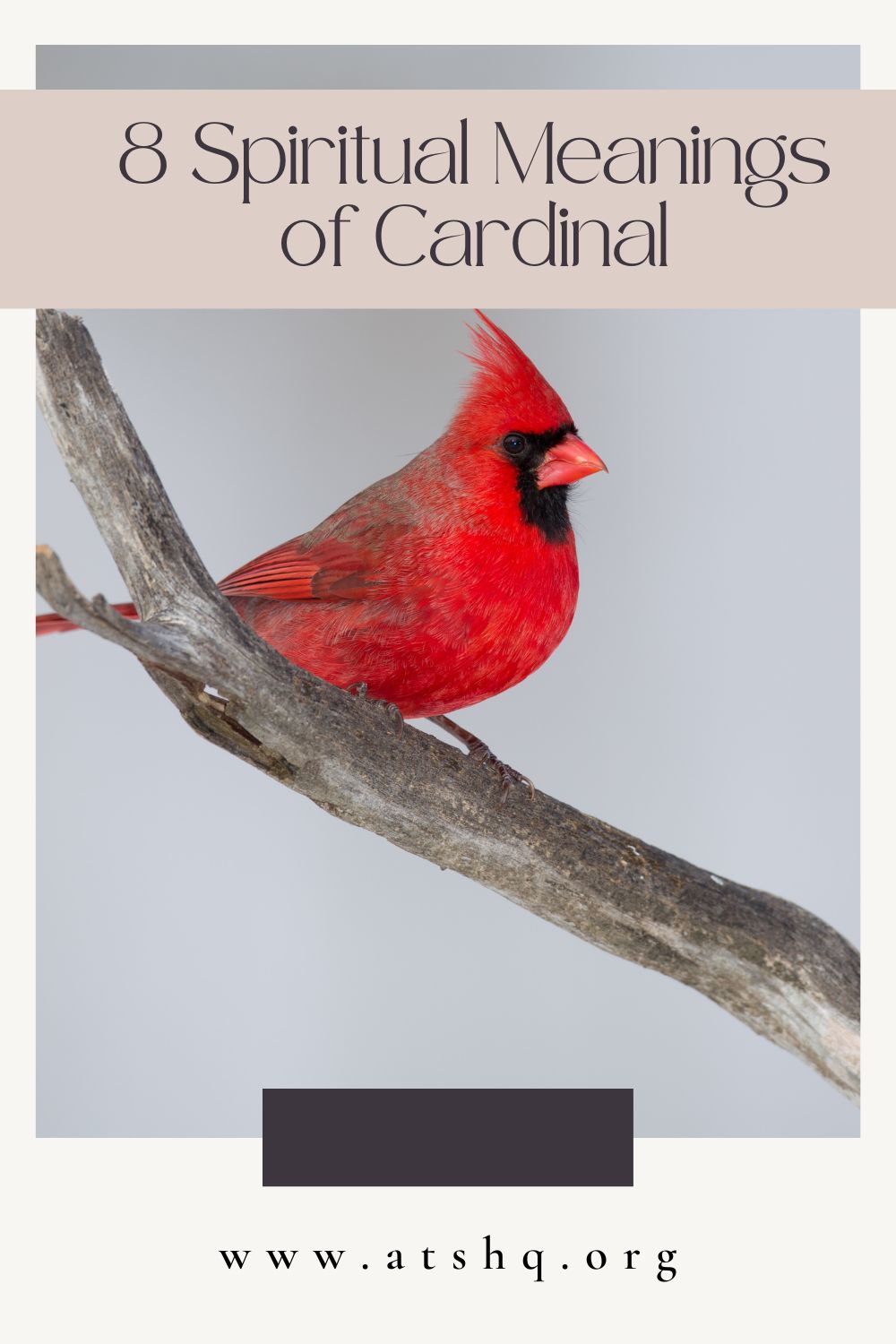 There are many Native American stories about their cosmology, featuring cardinals. For example, one Cherokee myth tells about the time when the Sun disappeared and the world turned pitch black.

It was not until one brave chieftain went to the underworld with the help of his shaman. The chieftain went through numerous trials until he found a box that was locked. He could hear distinct whistles coming from the inside of the box.

The chieftain opened the coffin and released what was locked there – the red cardinal that was the Sun’s daughter. The bird took the chieftain back to our realm and flew high into the skies, shining light upon the earth once again.

Some clans even hah a red cardinal as their totem animal, meaning the animal (in this case, a cardinal) is deeply associated with the clan’s lineage and is guiding the kin through life, both after being born and after passing away.

Manifesting the red cardinal strength helped clan members to overcome hardship and misfortune. In such clans, high-status males, specifically chieftains, would wear war bonnets adorned with the bright red feathers of cardinals, channeling the power of this bird.

What Do Cardinals Symbolize?

Cardinals are almost universally seen as carrying a positive meaning. It arises from the unique lifestyle and awe-inspiring appearance of the bird. Here are the strongest symbols cardinals represent:

Sighting a cardinal is always a good omen because it represents luck and fortune that you could expect in the future, as quickly as later today, or years later sometime in your life. It’s because cardinals are associated with the number 12 in most Native American cultures.

The connection with luck arises from the fact that, unlike most songbirds, cardinals don’t migrate and stay at their location year-round, in other words, for 12 months. Additionally, the incubation and nesting period of cardinals on average last 12 days!

Because of that, it’s said that after seeing a cardinal, you can expect something lucky to happen to you after 12 units of time, be it hours, days, weeks, or even years. The more cardinals you see at once, the bigger the fortune will be, and the more frequently you see them, the sooner you’ll experience it.

So if you see many cardinals one by one during the same day, the luck might become reality after 12 days, rather than 12 weeks.

Finally, many Natives believe that cardinals lay 12 eggs when fortunate and prosperous times are coming for the clan. It can include anything from a great crop the following year, or even positive advances in politics with another clan.

The vast majority, about 90% of bird species are monogamous, meaning they only have one partner. However, that exclusive relationship only lasts for a single dating season, and most bird species don’t mate for life, finding a new partner every nesting season.

Contrary to that, cardinals are monogamous and mate for life. The very first partner is also their last, meeting up for mating every year. Furthermore, males of many bird species leave their partners after doing the deed.

On the other hand, cardinals not only stay with their partners during the entire nesting season but also provide them with food and protection, while the female cardinals nest the chicks.

Finally, the cardinal males usually feed their mates beak-to-beak, and that’s as lovey-dovey as you can get!

All of that makes it easy to understand how this red bird symbolizes love, romance, and passion between two people. The strong bond between two cardinals lasting their entire life is nothing short of amazing.

That’s why seeing a cardinal, or even better, a pair of cardinals when you’re with your partner symbolizes that this relationship will last for life and you’re each other’s soulmates.

Even if you see a cardinal on your first date you should take it as a sign to take things more seriously with the person you’re out with, because the universe is sending you the bonding message of love, romance, passion, and compassion. 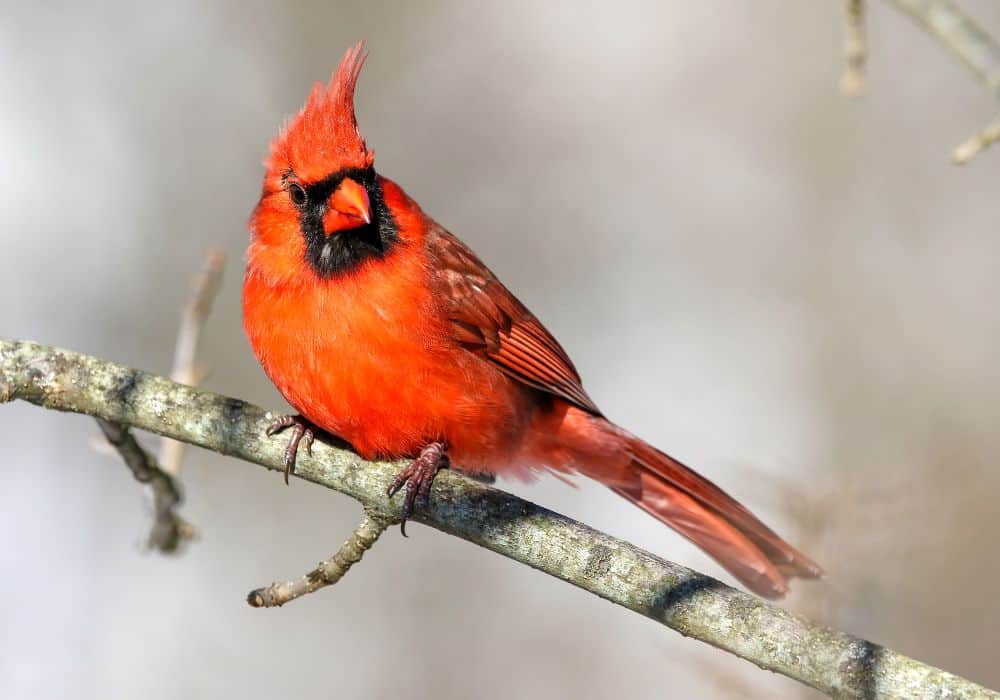 Cardinals are so recognizable because of their bright red feathers. In many cultures all around the world, including the Native Americans, the color red symbolizes courage and tenacity.

Some clans would only wage war after sighting many cardinals. The flock of these birds would indicate to the shaman that the warriors of the clan are prepared for the battle and that it’s time to strike the opponent.

That’s why the sight of a cardinal gives most people a sense of empowerment and encouragement. Just like cardinals in the wild protect their territory from intimidating intruders, so can you find the courage within to stand against any challenge that crosses your path.

The most recognizable feature of a cardinal bird is the crest on top of its head. In addition to that, the bird is red. Such an appearance is bold, and creativity requires being bold, and that’s what cardinals symbolize.

Creativity also leads to generation, be it of something completely new, or something that’s improving on the old. Cardinals build beautiful nests for their chicks, generating a safe place for their offspring to hatch and grow.

Moreover, instead of building a new nest every mating season, cardinals return to their previous nest, but before it’s ready to be used, it has to be repaired or regenerated to its peak condition.

When Can You See A Red Cardinal And What Does It Mean?

You can see a cardinal at all points in life, and it’s likely to be trying to tell you something. Naturally, there can’t be a “one-size-fits-all” guide for cardinal symbolism, covering every situation and scenario possible.

However, there are several scenarios when people frequently report seeing cardinals. The birds come only to show something important, but many people don’t even think twice about seeing it and go their own way, missing out on something huge that the bird came to say.

Soon After Someone Close to You Passed Away

Because cardinals are birds with high spiritual significance, they are usually thought to be the messengers carrying news from the beyond. It’s very common to see a red cardinal after someone close to one has passed away.

If the cardinal stays around for a while or even tries to get your attention, chances are that it was sent by the person who has passed away to inform you that they are doing well in the afterlife.

You might also have a dream with a cardinal in it. That’s another way people who have left our earth can communicate with us who are still living on earth.

Upon having such a dream, try writing down as many details as you remember, and think through what it could mean to you personally. Even if you don’t get a grasp at first, keep re-reading your dream journal entry every few days, and soon enough you’ll start understanding what the dream means and what message the cardinal had to carry.

Having To Make a Difficult Decision

Most of us have experienced a situation of being at crossroads in life. Usually, difficult decisions have two options, out of which one requires your courage to make it happen, sometimes even sacrificing something you value.

On the other hand, another option is usually easier and doesn’t require you to invest much effort or sacrifice something in order to take it. If you’re in such a situation and see a cardinal, it can suggest that you should take the more difficult option that needs you to be brave. 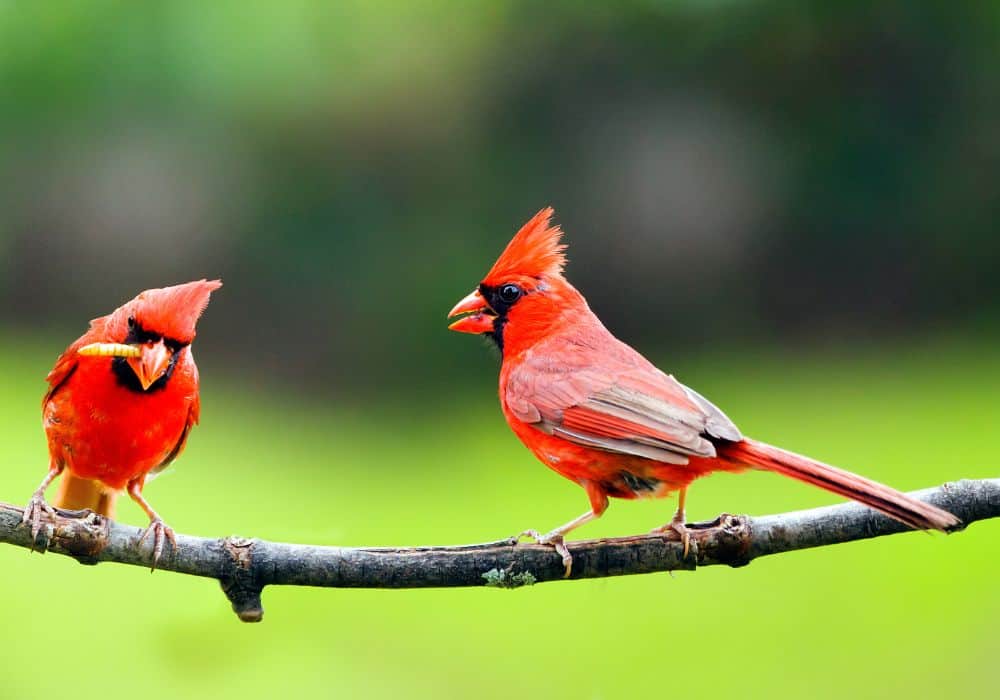 Being stuck in a routine isn’t something enjoyable to most people, and it usually leads to becoming stuck in a rut. In the worst cases, being stuck turns into a downward spiral, slowly but surely chopping away your spiritual resolve and mental health.

Breaking out of such a state is difficult, so it’s always better to prevent it from happening in the first place. If you recently started getting thoughts of boredom, depression, and general lack of spirit, it could mean that you’re stagnating in life.

Seeing a cardinal at such a time symbolizes the need to change something, and do it quickly before your life takes a turn for the worse. Be creative and generate something new in your life.

It could be anything, like finally picking up that guitar and riffing before bed, buying a watercolor set and creating beauty on the canvas, or even signing up for Brazilian jiu-jitsu classes at your local academy.

If you’re stagnating in life and a cardinal comes to you, it means that you should do something that brings novelty into your life and allows you to express yourself to the outside world. Don’t ignore this sign because it could become too late sooner than you expect.

Romantic relationships can be one of the most precious things in your life. Love, passion, and intimacy with another person are something you can’t experience in any other way, than by forming a strong bond with someone else.

Sadly, many relationships turn sour, and even the most fulfilling ones aren’t the smooth sailing we would want. If you’re experiencing issues and friction in your romantic relationship, it can become difficult to keep loving your person as you did when things were still perfect.

Before you notice, you start having arguments and fights one after another, and the relationship disintegrates in front of your eyes. Cardinals showing up to people going through relationship problems indicate, that the relationship is something worth fighting for.

One person has told me a story about seeing a cardinal right after having a huge fight with their partner. It almost ended in him breaking up with his fiancée, and he rushed out of their apartment in anger, saying that he was not going to sleep home tonight.

Outside, he saw and locked eyes with a cardinal, and he got filled with powerful feelings towards his partner when the relationship was still fruitful and loving. It was as if the cardinal took him on a spiritual journey, reminding him of the value of his relationship and what it could be.

The man returned home minutes after and made up with his fiancée. Both cried and apologized to each other, saving their relationship and marrying each other the very next summer.

Where Does Cardinal and Bird Symbolism Come From?

Cardinals are almost universally seen as carrying a positive meaning. It arises from the unique lifestyle and awe-inspiring appearance of the bird. For example, other birds that are associated with strong symbolic meaning, also show it in their color and behavior.

For example, a dove is white, and like its color, is seen as a symbol of purity, love, and peace. Something that’s pure is untainted by sin, just like a dove is white. The calming song of doves is related to peace and carries tranquility.

Contrarily, a raven is black, and the color black symbolizes misfortune, loss, and grief. Ravens are scavengers, occasionally feeding on carrion in the wild. As people spotted ravens around dead animals, this bird become associated with death and everything related to it.

According to many Native Americans, cardinals are one of the most important animals there is, and always signify something important that you shouldn’t miss. So the next time you see its bright red feathers or hear its lovely singing, stop for a moment and appreciate its beauty.