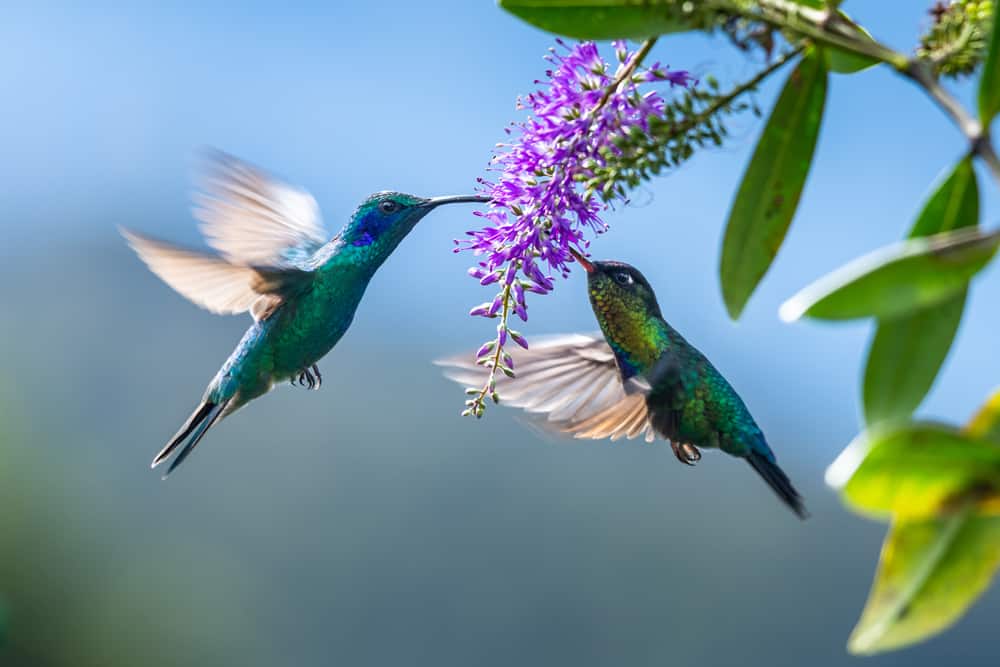 Hummingbirds are tiny birds native to the Americas and are one of the most spiritual animals on the planet. For centuries now, these birds have been used by various cultures as points for inspiration and symbolism.

While to the naked eye, many of us will just look at these birds as fascinating little creatures that make a humming noise when they are in flight, others have a deeper connection with them. Today, we are going to explore the symbolism that surrounds hummingbirds and look at how important they are to certain cultures. 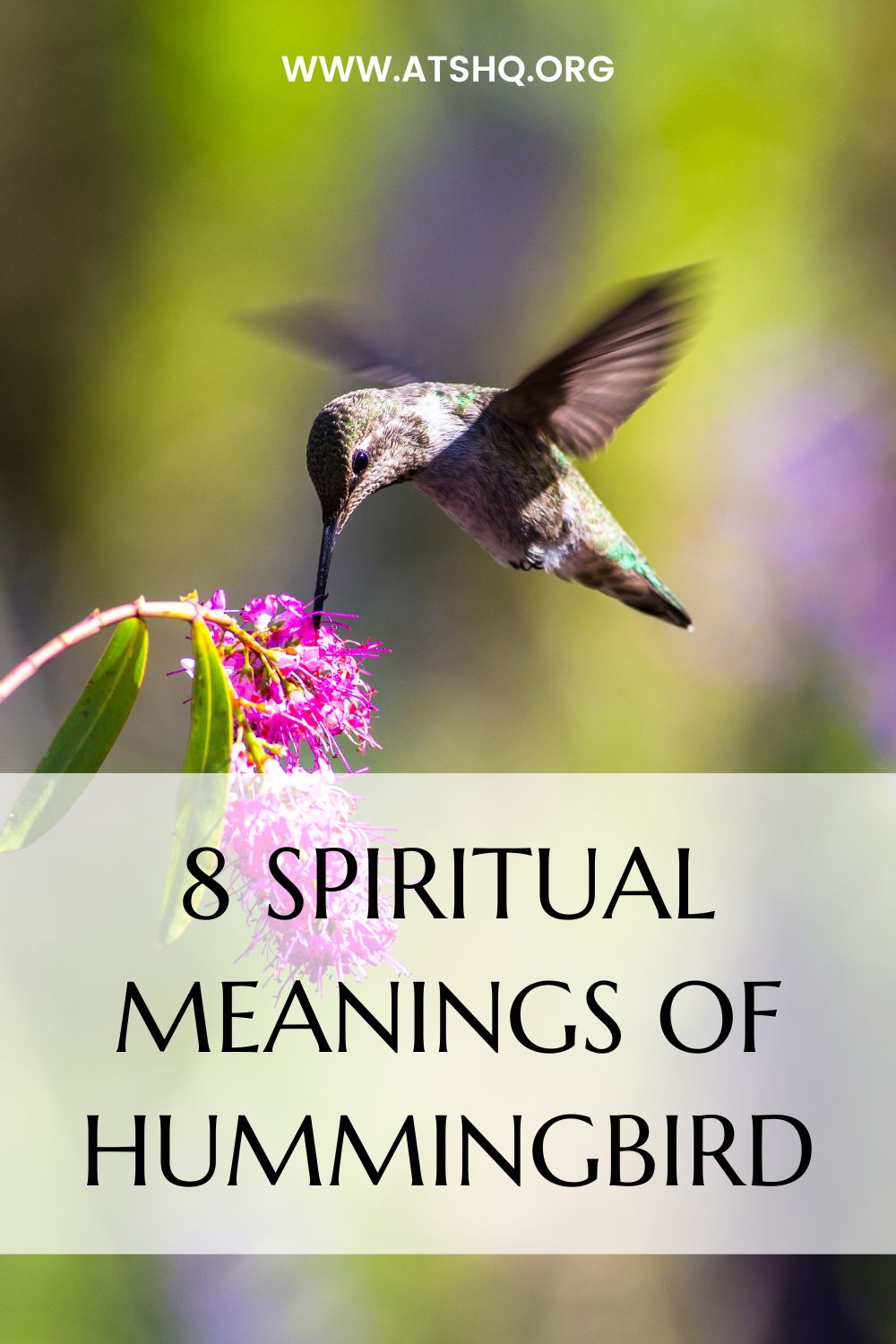 Before moving into the symbolic importance of these birds, it’s important to recognize some of their key features. These features not only make them unique but also could be important to know if a hummingbird is your spirit animal.

Hummingbirds are the smallest migrating bird in the world, meaning they move from one part of the world to another depending on the time of the year. Not only is this impressive due to their size, but they also tend to make these migrations on their own rather than in a large flock like many other species of bird.

Contrary to popular belief, the humming sound that makes hummingbirds so unique doesn’t come from their mouths, but rather from their wings. Their flying technique involves rapid flapping movements which create a humming sound. As a result, you will only be able to hear a hummingbird’s unique sound while they are in mid-flight.

If you can’t hear a hummingbird then the best way to identify one is to look out for a tiny bird with colorful feathers and a long, skinny bill. They will usually be on their own unless they are mating (which only takes around 4 seconds!)

Another unique feature of a hummingbird is its ability to fly backward and upside down. No other bird on the planet can do both of these things, and hummingbirds utilize this special talent to feed on the nectar of flowers without damaging the plant.

While they do enjoy nectar, there are other food sources that hummingbirds use to feed their appetite. They are keen hunters of small insects, such as ants and cockroaches, and beetles, as well as mosquitoes, wasps and spiders. They usually eat around twice their body weight in food each day so if you have an issue with pests and insects in your garden, then a hummingbird could be your best friend.

Now we know more about the characteristics of these mysterious birds, it’s time to look at how they are viewed symbolically and spiritually. Prepare to enter a whole new world.

What It Could Mean If A Hummingbird Interacts With You? 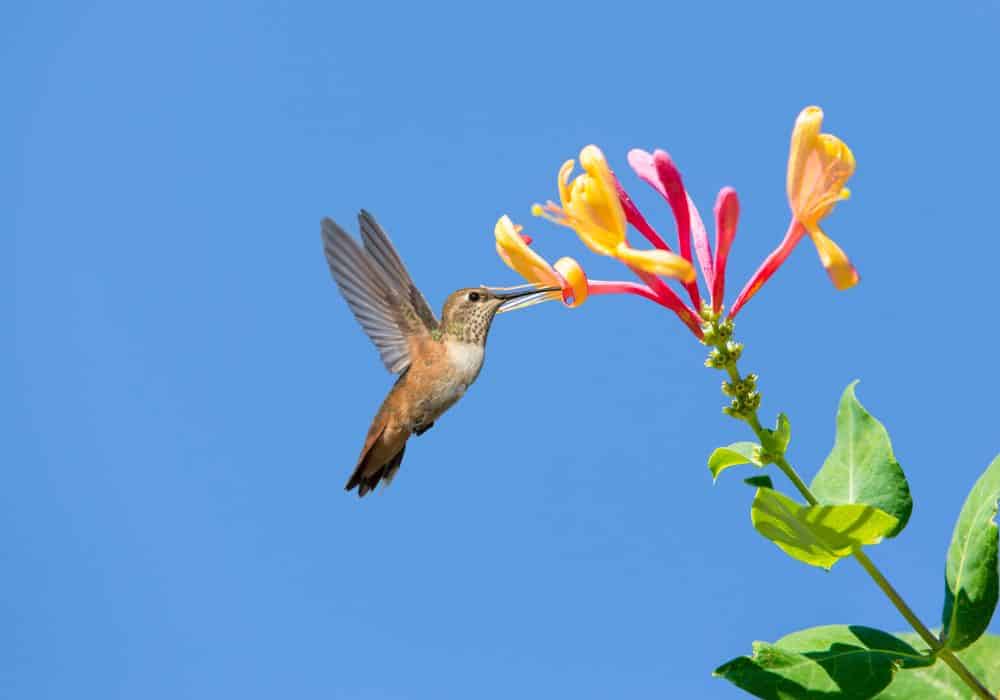 There are many ways in which a hummingbird can interact with you, from perching on your shoulder to hovering in front of you. Any encounter though should be treated positively with many believing that a hummingbird is most likely to appear to you on the back of some personal struggle to let you know that the toughest of times are behind you.

If during an encounter, a hummingbird decides to hover in front of you then they could be teaching you the importance of patience. You may be facing some obstacles at work or in your personal life but this could be a message to persevere because, through patience, positive results will come.

If during an encounter, a hummingbird decides to perch itself on your shoulder then you should consider yourself incredibly lucky as this is a rare occurrence. Take this time to reflect on the good things in your life and to appreciate those around you. It’s easy to get bogged down with the bad things that happen, but a moment like this should inspire you to alter your outlook on life.

Dreaming About The Hummingbird? 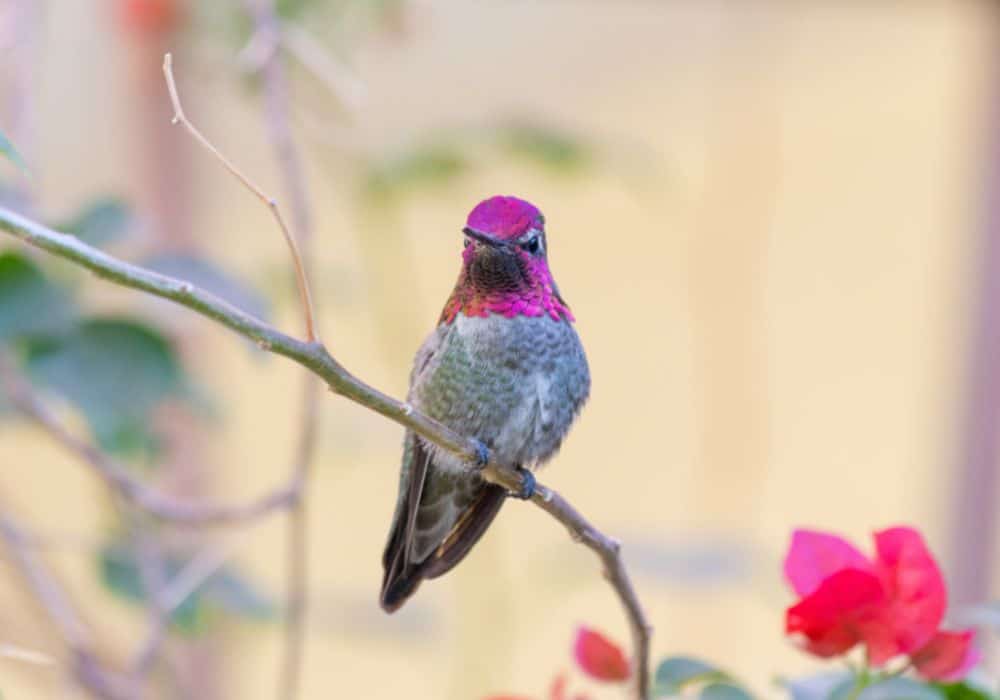 Hummingbirds are of huge symbolic importance in native American cultures. The hummingbird plays a pivotal role in the myths, legends, and folklore of various native American tribes with many of them looking to the bird for good fortune.

Those native to the Mojave Desert in Arizona near the Colorado River believe that hummingbirds brought humans to the earth’s surface so look to them as almost magical entities.

In ancient Mojave tales, people from their tribe lived underground until a hummingbird found the path to the light. Even if you take this story metaphorically rather than literally, you can see why the Mojave tribe look to hummingbirds in times of sorrow.

Native American tribes from the Northwest have hummingbird clans meaning. There are totem poles within this tribe with hummingbirds carved into them. For these clans, the hummingbird is a sign that luck is on your side so encourage positive risk-taking.

Navajo people make up the largest federally recognized tribe in the United States and they value the hummingbird as much as anyone. In ancient Navajo tales, the hummingbird was responsible for investigating what was beyond the blue sky.

Upon the hummingbird’s return from its mission, it revealed that nothing was found. This story is the reason why the Navajo tribe see hummingbirds as symbols of eternity and infinity and is why they treat them as sacred creatures.

The pueblo tribe also have hummingbird clans, just like clans in the Northwest. The reason why hummingbirds are held in such high regard by Pueblo people is because of an old Puebloan tale about the important role that hummingbirds play in purifying the earth.

The story tells of how hummingbirds gather smoke from caterpillars and then take it to the medicine men (shamans) who then use the smoke to purify the earth.

The Cherokee tribe see the hummingbird as a symbol of hope and prosperity due to an old tale about one retrieving a tobacco plant from an evil goose. In the tale, an elderly lady needed tobacco to prolong her life. Many different animals attempted to retrieve the plant with no success.

Up stepped a hummingbird, who was doubted due to its size. The hummingbird uses its speed to retrieve the plant and save the woman’s life. The lessons to be learned from this legend are to never judge a book by its cover and to believe in yourself in others, even if the task at hand seems impossible.

The apache tribe believe that those who have passed away can return as hummingbirds to offer grieving loved ones support.

This is due to an old Apache story of a deaf warrior called Wind Dancer who, despite his disability, was able to create beautiful music which brought good weather to the land.

Wind Dancer was in loved with a woman called Bright Rain and after he passed away, he used to visit her in the form of a hummingbird to comfort her and to return nice weather to land.

The final Native American tribe that places spiritual and symbolic value on the hummingbird is the Hopi tribe.

Hummingbirds are of huge cultural importance to members of the Hopi tribe due to the fact that they credit hummingbirds for bringing rain to their land.

An ancient Hopi story tells of a famine that lasted five years was broken thanks to a toy hummingbird coming to life. The hummingbird went to God and convinced him to return rain to the land.

Hummingbird Symbolism Across Other Cultures 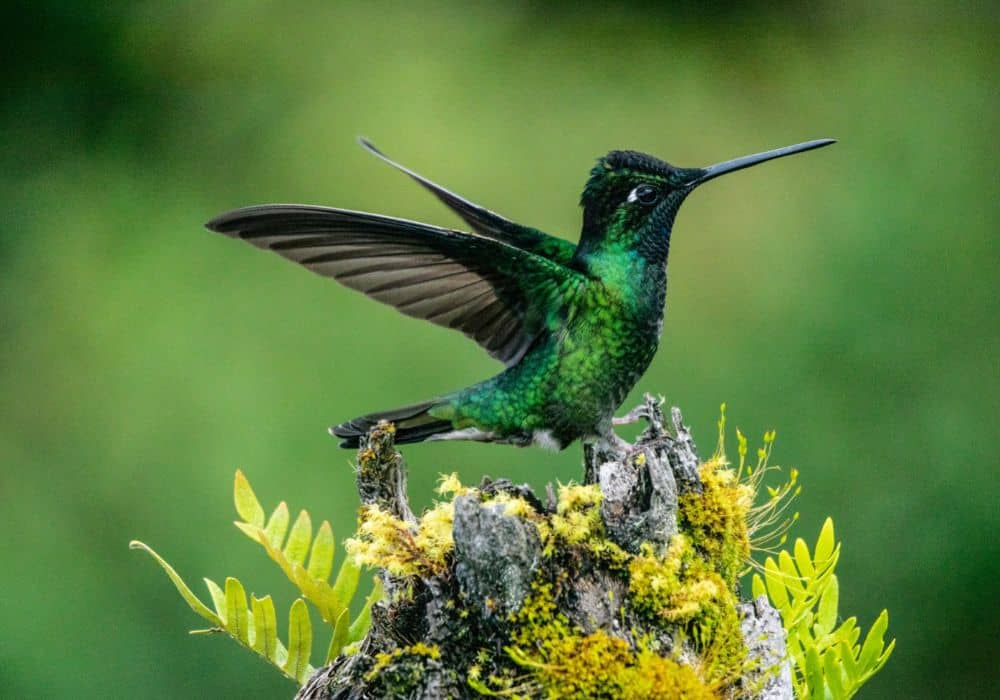 Although hummingbirds are perhaps most commonly associated with Native Americans when it comes to their symbolic and spiritual value, there are other cultures around the world that believe in their spiritual value, too.

Despite not being a bird native to this part of the world, hummingbirds are still considered to be sacred animals that can provide you with good luck and fortune in China. As a result, the bird is a renowned feng shui symbol.

The art of feng shui is taken very seriously in parts of China, and you are recommended to hang the art of hummingbirds in southwestern corners of your home or workplace to energize you and bring you success.

The relevance of hummingbirds in Mexico is relevant in the modern era, as well as in the ancient time of the Mayans and Aztecs. In modern-day Mexico, some cultures see hummingbirds as teachers.

For Aztecs, their God of sun and war is known as Huitzilopochtli. When translated, this essentially means ‘Hummingbird Wizard. For Aztecs, hummingbirds were considered to be some of the most sacred creatures on the planet and only the highest ranking tribal leaders were allowed to wear feathers belonging to a hummingbird.

Hummingbird Symbolism In The Caribbean

Many hummingbirds have lived in the Caribbean for centuries which has resulted in plenty of myths and legends being written about them. As a result of these tales, the hummingbird is seen as a spirit messenger, which departed family members can transform into after they pass away.

In addition to this general perception of the hummingbird across the Caribbean, some of the individual islands and cultures within the area have their own symbolic beliefs when it comes to these unique creatures.

The Taino people, who inhabited large parts of Cuba, Jamaica and the Dominican Republic up until the 15th century, saw the hummingbird as a symbol of rebirth and evolution. This is due to a Taino legend that states that a hummingbird started out as a fly until Father Sun transformed them into what they are today.

In Trinidad and Tobago, the hummingbird is featured on the country’s coat of arms, displaying how important a symbol the animal is to the people there. The natives on this island believe that the hummingbirds there are the spirits of loved ones who have passed away.

Finally, in Puerto Rico, they recall an ancient story of a young couple from different tribes who fell in love. No, we aren’t talking about Romeo and Juliet here but the story follows a similar pattern. Ultimately, the man pleaded with the god to prevent the woman from marrying another man from her tribe so they turned her into a red flower and turned him into a hummingbird.

As a result, Puerto Ricans view hummingbirds as a symbol of true love.

Hummingbirds As A Totem Animal And Spirit Animal

If you have a hummingbird totem animal or a hummingbird spirit animal then you are going to share some of the hummingbird’s most wonderful characteristics. You are likely a courageous and inspiring individual who doesn’t rely on others for success.

You are going to be a creative and unique person and if you ever lose sight of that then your hummingbird spirit and/or totem will appear to you to inspire you to get back on the right track.