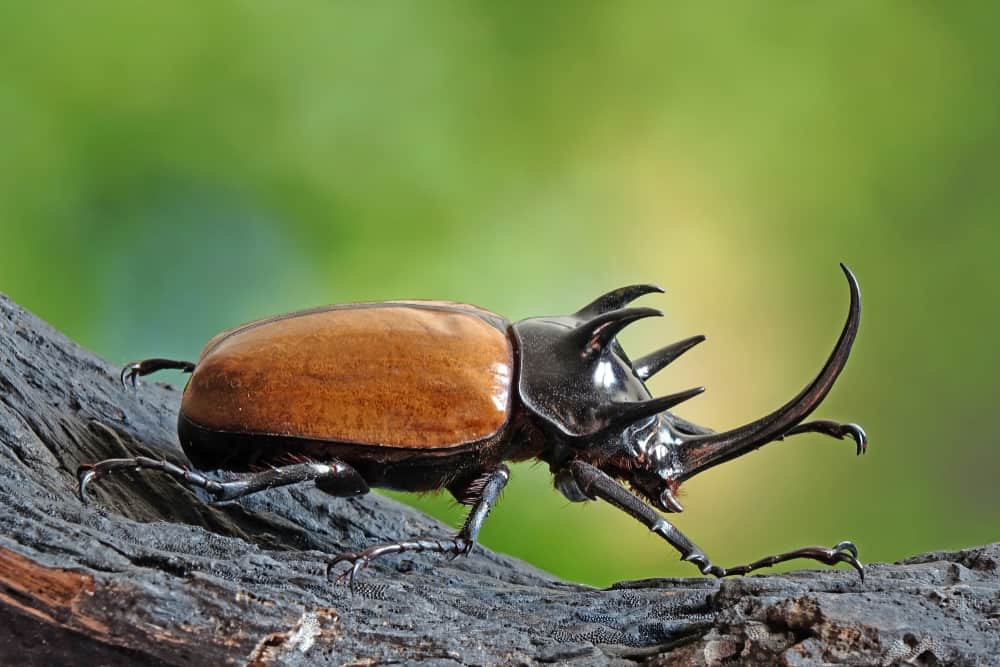 Beetles encompass the largest group of insects on earth which includes over 300,000 different species. They can be herbivores or parasites, larvae or flying adults, pests, or garden allies. With such a diverse group to choose from, it’s no wonder beetles can symbolize a large variety of characteristics, traits, and events.

Generally speaking, almost all beetles can represent strength, transformation, and a renewal of nature. There are also different representations of beetles depending on the culture and/or the type of beetle being mentioned. This article will cover each of these facets in further detail. 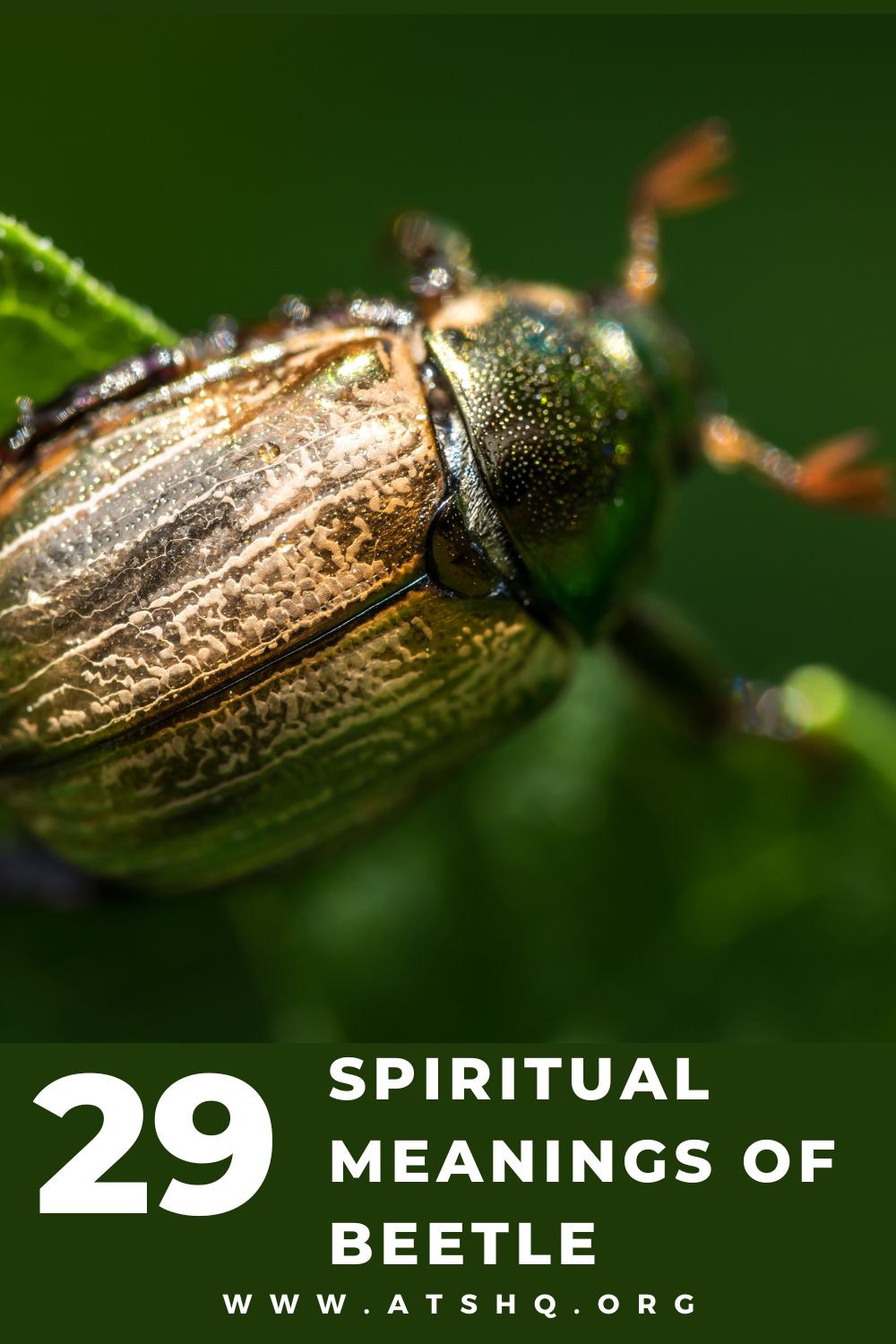 The General Symbolism of Beetles

Beetles are small creatures that tend to fly as adults, although they’ll spend most of their lives on the ground. These insects communicate using pheromones and sounds, lay hundreds of eggs, and are essential for the environment across every continent except Antarctica.

While each species is unique, all beetles share the symbolism of strength, transformation, and a renewal of nature.

Beetles are some of the smallest creatures on earth, but they are far from the weakest. These small creatures represent and impress with their strength and fortitude.

In fact, the Horned Dung Beetle has been named the strongest insect in the world. Lifting over 1,000 times its body weight, it is hundreds of times stronger than ants.

While a few species can be found in aggregations, most beetles move alone. Another protective factor they have is that their soft wings are protected by another pair of hardened wings that act like a case or shield. 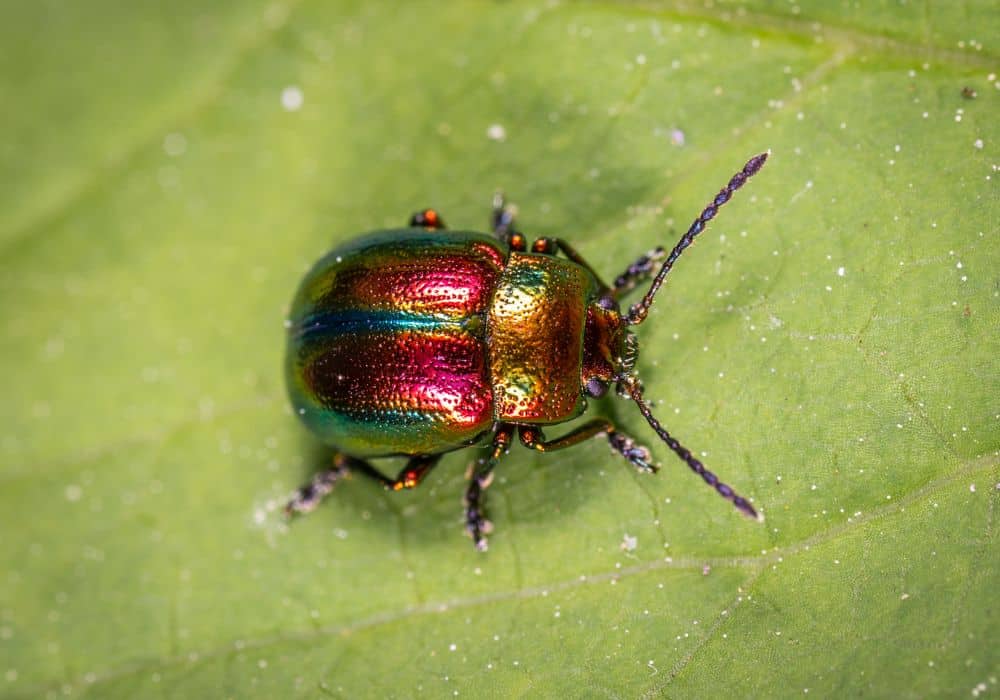 Beetles go through four life stages: egg, larval, pupal, and adult. Most eggs are laid in batches of over 100, quickly turning into larvae or grubs. These larvae find nourishment through anything they can get their “hands” on, shedding their skin in a process called molting 10+ times before becoming a pupa.

The pupal stage is the peak of the beetles’ transformation. Also called the cocoon stage, this is when the larva is dormant and begins to complete metamorphosis to become an adult beetle. This process could take anywhere from a month to three years, depending on the species.

The transformation that most insects go through – beetles included – is symbolic of how we humans should and do change over their lives. The process of molting and the pupal stage in particular represent astounding positive change over time with patience, effort, and persistence.

3. Beetles Symbolizing a Renewal of Nature

Most beetles play an important part in the environment. Beetle pollinators, for example, help farmers by protecting and encouraging plant growth. Certain carnivorous beetles, like ladybugs, feed on pests, like aphids, and protect plants.

Not only do they benefit plants, but beetles also help recycle natural materials and filth to keep the earth clean. Many are decomposers or scavengers that break down organic waste or matter. This matter blends into the soil, spreading nutrients in the environment and creating a natural renewal.

Different Beetles and What They Represent 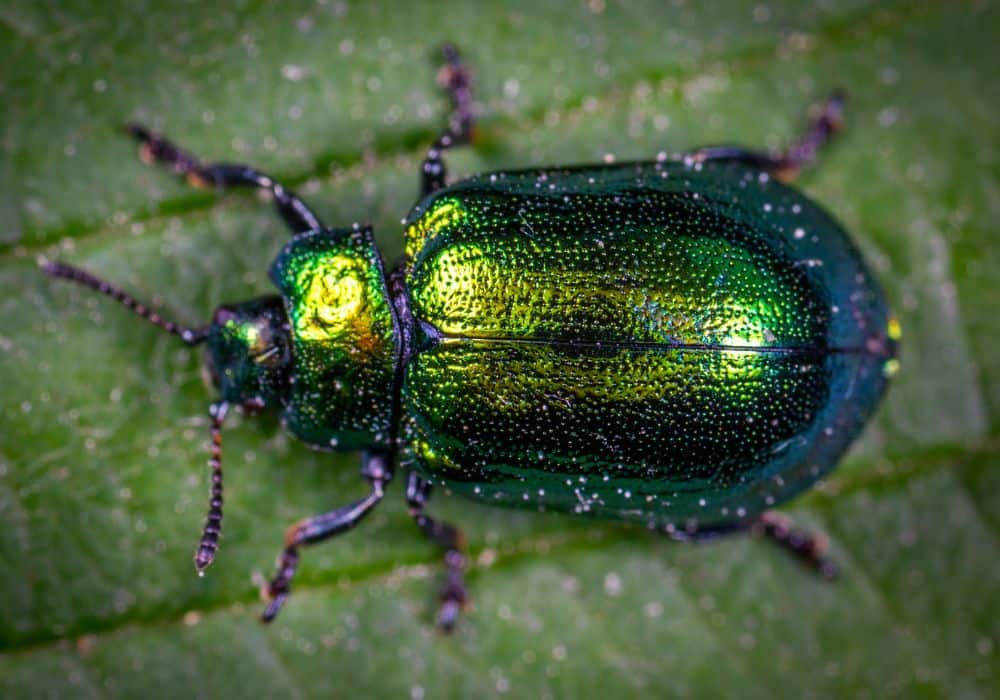 Since there are hundreds of thousands of beetles around the world, naturally some will represent different things than others. Below are a few of the most well-known beetles and their symbolism.

Ladybugs are often seen as one of the most beautiful and luckiest beetles. With a name originating from their positive impact as a farmer-friendly insect, ladybugs symbolize good fortune, prosperity, and the granting of a wish.

In Italy, they are good luck for infants. In France, ladybugs symbolize healing, and in Korea, they are called the shaman beetle of the spirit world.

Even though farmers may not appreciate them, potato beetles act to best serve their needs. This means having a stable diet and practicing self-care and self-nurturing.

If this beetle resonates with you, it might be time to put yourself first and take care of yourself – physically, emotionally, and physically – before all else. 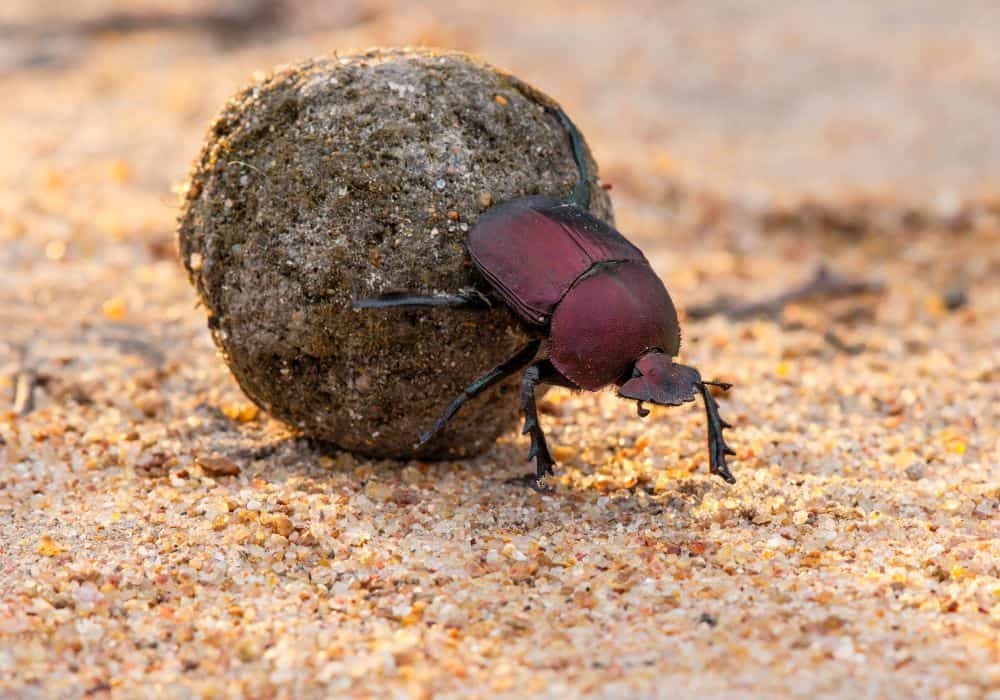 Dung beetles are not only some of the strongest beetle species, but they also include the strongest insect in the world. They represent determination, strength, and duty, pushing along balls of feces that can measure more than five times their size.

These beetles were also believed to represent divine manifestation in Ancient Egypt, reincarnating the sun god Khepri. In this way, they may symbolize rebirth and even immortality.

Jewel beetles, formally known as the Buprestidae beetle family, sport glossy and iridescent colors that change depending on the light. If you find a green one, you may associate it with wisdom, change, or motherhood.

Egyptians called the jewel beetle the symbol of the chief god Osiris. Osiris is the god of the afterlife, death, resurrection, fertility, and agriculture, among other things.

In one Egyptian tale, the bark beetle was jealous of the well-fed mosquito so it asked the mosquito where to find blood. The mosquito lied and said to search for it within the tree bark, which is why the bark beetle now feeds on the bark. Here the beetle may symbolize how being gluttonous or jealous will lead you to a dead end.

The weevil beetle is small, brown, and common worldwide. They munch on leaves and stems and are often seen as pests for gardeners.

While they may not be viewed positively nowadays, in the past Native American tribes would use the weevil to symbolize the life cycle and the passage of time. The weevil served as a reminder to be prepared for the unexpected at all stages of life.

The Symbolism of Beetles in Culture 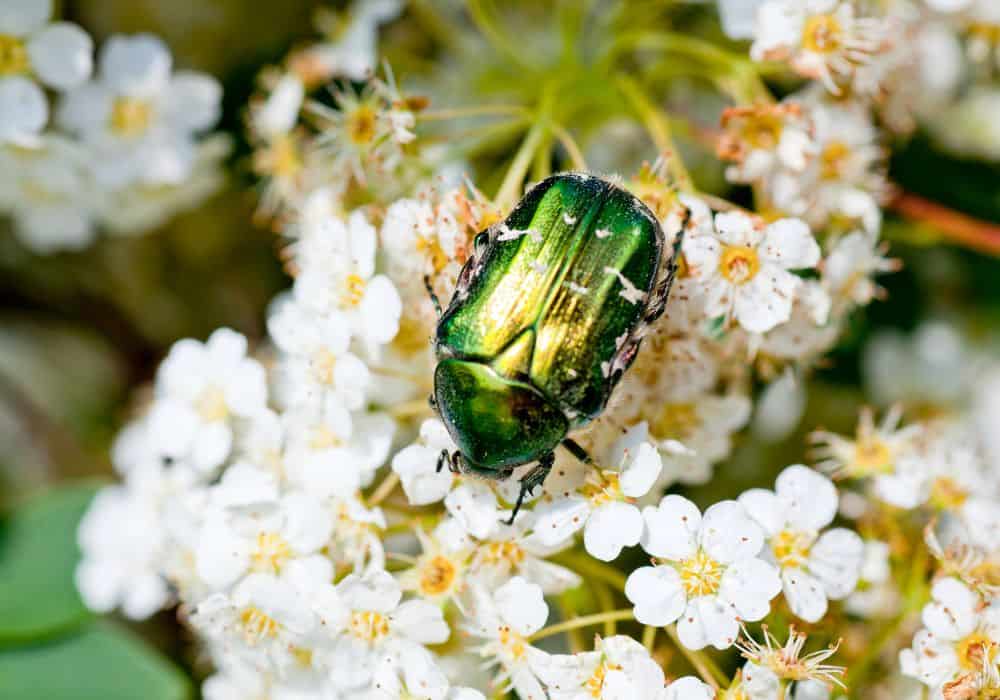 Beetles may be revered or detested, depending on the species and the culture that’s observing them. Let’s see how the symbolism of beetles changes with culture.

Native Americans revered beetles with an accompanying sense of dread. Many woodland beetles intimidated these tribes because they were thought to carry disease. Even so, killing them was seen as a bad omen.

In some practices, smoke was blown into the ears of tribe members to drive away any beetles that were thought to be eating away at the brain.

Beetles in the home, on the other hand, could bring a positive omen of love or fertility.

One story by the Cherokees saw the beetles as the origin of the earth. In this story, the earth was a floating island surrounded by water. The water beetle called Dayuni’si helped create the island by digging up mud from the water and bringing it up to the surface.

Beetles were always seen to attract good fortune in Ancient Egypt – especially dung beetles, also known as scarab beetles. The scarab beetle symbol stood for life beyond death in ancient Egypt, and historians believe this representation may have come from observing how the dung beetle lays eggs within excrement.

One story says that a huge beetle was created in a large meadow and that it pushed the disc of the sun. The beetle ended up being the Sky God and the sun disc held its eggs.

Beetles have always played an important part in Japan. Prehistoric pendants have been found there in the shape of beetles, and, nowadays, some beetles are still kept as pets.

In China, the beetle is a symbol of new life and creation. The scarab beetle in particular is used here, although this representation originates from Egypt.

One old belief in China is that beetles get pregnant through the wind. This may be why the written Chinese character for wind includes the character for the insect.

Not all beetles in China are respected, however. Some are pests, others are religious symbols, and certain species are even eaten as food.

Some tribes in Africa have been known to use beetles in certain rituals meant for eliminating unfaithful partners or husbands.

Other tribes view insects as omens and a part of human affairs. The Death Watch Beetle, for example, is said to warn against upcoming death.

The Symbolism of Beetles in Religion 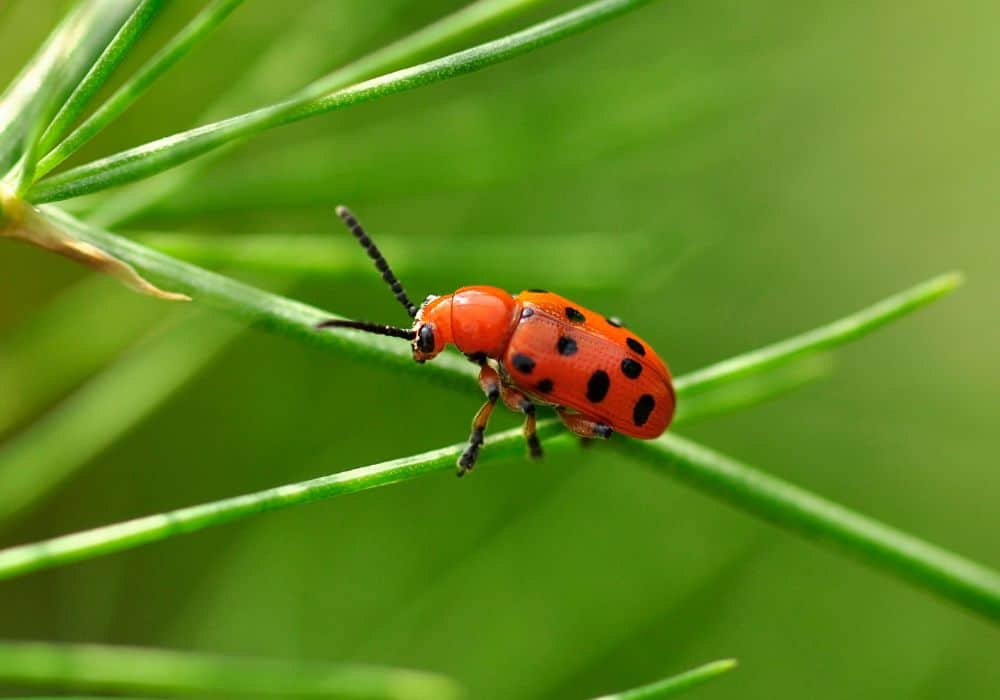 Beetles have been referenced – both accurately and inaccurately – in Neoplatonism, Christianity, and Celtic religions.

Neoplatonism is a religious system developed by Plotinus’ followers in the third century AD. In Neoplatonism, the beetle began to symbolize the fathers of the church. Because they often take the unclean and make it clean within the environment, beetles were even likened to Christ.

During this time, some beetles were even used to make medicine which was believed to heal the sick.

Due to an error in one translation of the King James Bible, beetles were originally grouped with jumping insects like locusts and grasshoppers. The New King James Bible fixed this error and removed them from this grouping. This is important because the jumping insects in the Bible represent plagues and bad luck, but the beetle should not.

The Celts were ancient Welsh inhabitants, grouped into tribes, who lived during the 18th century. They spoke Celtic languages and were known by their individual societies as opposed to being a collective empire or nation.

The Celts rooted their beliefs in nature and beetles were viewed as both holy and evil, depending on the Celtic tribe. Many Celtic witchcraft rituals revere dung beetles as spiritual – like the Egyptians – because they hatch out of the “nothing” of dung.

The Symbolism of Beetles in Folklore 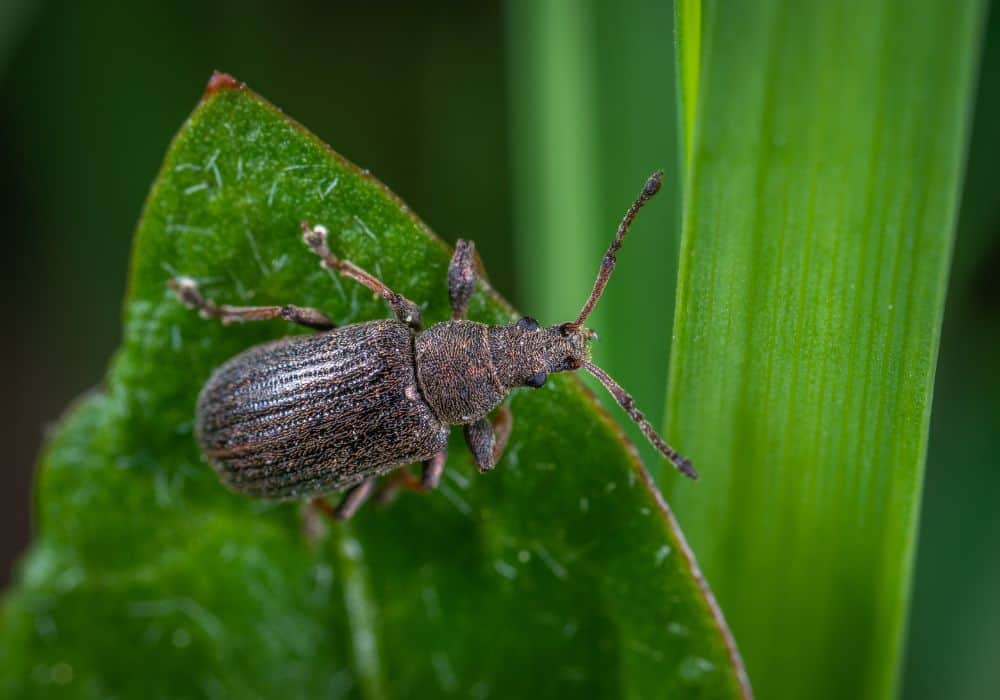 Folklore includes the customs, beliefs, oral stories, legends, and traditions of an area or group. Beetles can be found in the folklore of different countries and peoples, especially in European and Western cultures.

One Irish folktale talks about a European rove beetle called the Devil’s Coach-horse. When this beetle feels threatened, it raises its tail as a scorpion would. This tale says that the beetle is the Devil incarnated and that the only way to kill it is by using fire.

Other European countries share the same idea, associating dung beetles with the Devil and thinking that crushing the beetle with an object will bring injury to the person who does it.

Consider these quotes, sourced from famous Western authors and publications, and how the beetle is represented in each of them.

The Spiritual Symbolism of Beetles 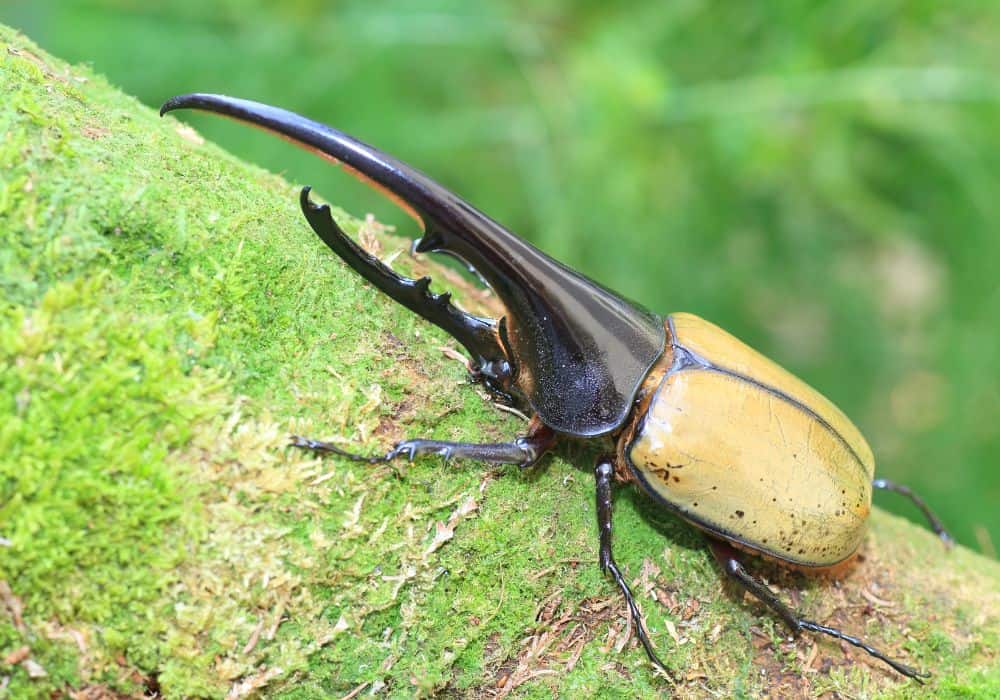 Spirit animals contain a spirit that guides an individual toward their destiny. A beetle spirit animal represents that you can make your best creative work from waste or what would appear to be rubbish. When you see an opportunity, the beetle spirit animal will help you rise to the challenge and jump at the chance to take it on.

These individuals also share a connection with the sun, linking them to renewal and light. If this is your case, try waking up early to take advantage of as much daylight as you can.

Totem animals represent a group or tribe as a reminder of their ancestry. For example, the Arunta tribes of Australia are associated with totem beetles.

Your family or group may have a beetle totem animal if you feel you represent renewal, self-preservation, and self-determination. These groups are often resilient, having faced and conquered various obstacles.

Power animals can be guardian spirits, protecting shamans in particular from unfriendly forces. This power animal may appear as someone who is proud of their strong behavior but is also aware enough to show their sensitive, vulnerable side.

Beetle power animals are hardworking and use their environment for good. Instead of worrying, use the beetle power animal to attract more opportunities and to be true to who you really are.

Dream interpretation belongs in the hands of the dreamer, but there are a few general interpretations that may help you decipher them.

With so many species of beetle, tattoos of this insect can be interpreted and designed in hundreds of ways. Here are some of the most common:

Beetles have long stood for different symbols within varying cultures, tribes, religions, and groups. With thousands of species and behavioral habits, the representation of the beetle greatly depends on which beetle you are observing.

There is some overlap, however. With their fortitude, metamorphosis experience, and help recycling natural elements, all beetles can symbolize strength, transformation, and a renewal of nature.