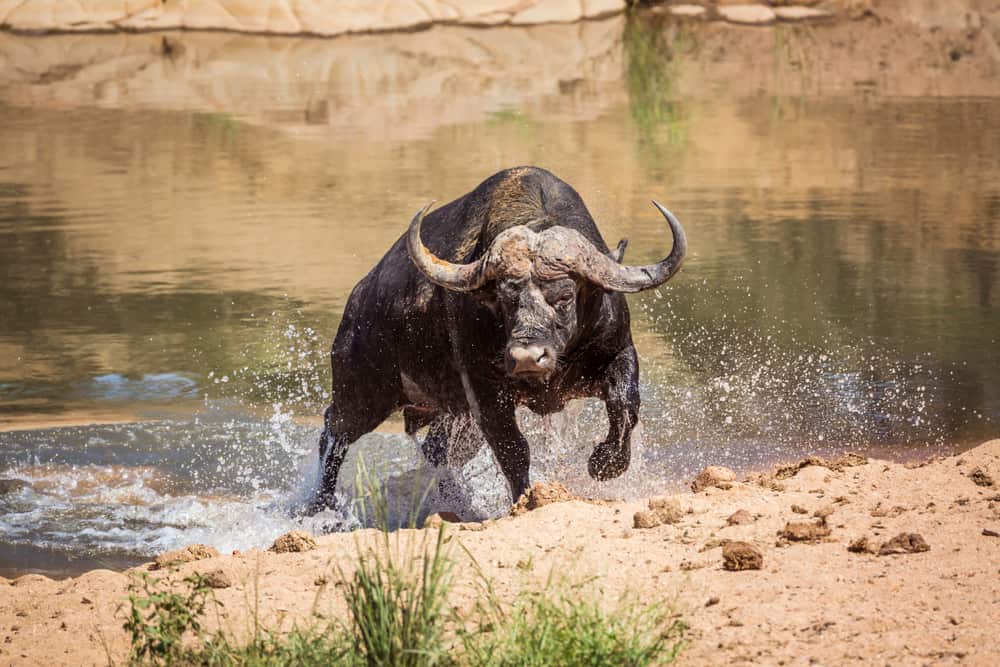 Have you ever watched a nature documentary, saw wild buffalos, and had some questions that weren’t answered in the programme? Have you ever been on a safari abroad or to a zoo and saw these majestic animals in person, but don’t know much about them?

Buffalos are often seen as something used for sporting entertainment, as domesticated farm animals, or as a unique attraction at a zoo, but they are complex, often misunderstood creatures that have a simple way of life in the wild.

Today, we will cover what a buffalo is, where they originated from, what they eat during different times of the year, their predators, and address some frequently asked questions.

What is a Buffalo? 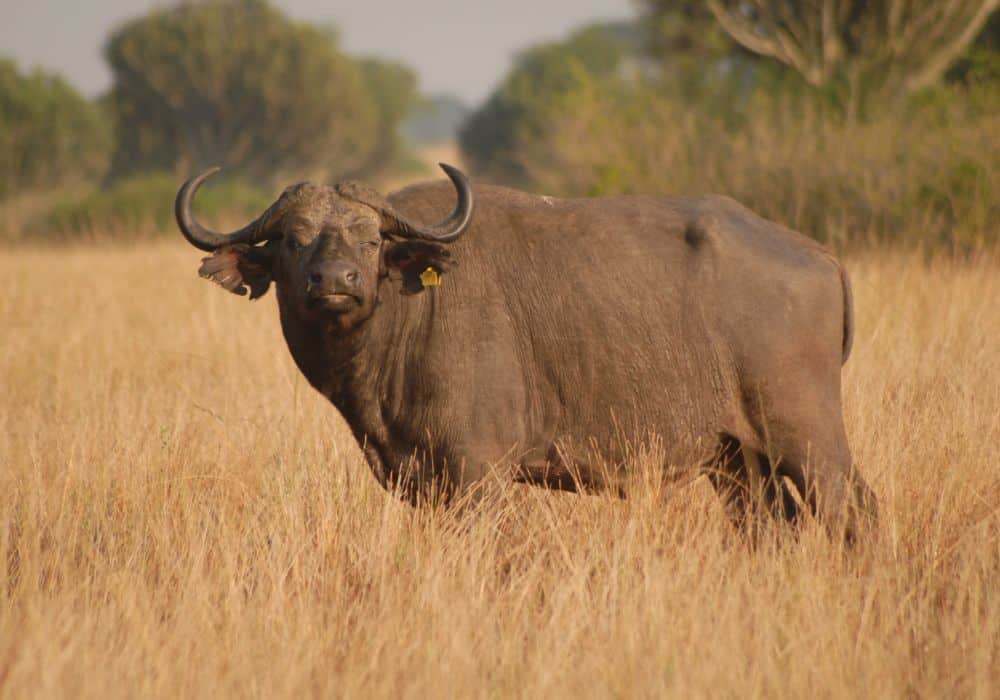 A buffalo is a mammal that resemble cattle such as cows. They are distantly related to the cow, through the auroch, but became separate species thousands of years ago. Another similar animal is the bison.

Often, bison and buffaloes are mistaken for being the same, but that isn’t the case. Bison have large humps on their shoulders, thicker coats, and bigger heads. Buffalos don’t have any of these features, but the biggest distinguishing feature is a beard, or lack thereof.

If there is no beard, then the animal is a buffalo. There are three main species of buffalo: Water Buffalo, Cape Buffalo (also known as African Buffalo), and American buffalo, as well as many subspecies.

The American Buffalo has some controversy surrounding it as technically it classes as a bison, but early settlers in North America named it a buffalo. Some want to rename it the American Bison, but the name stuck and has carried through until today.

They are large animals of up to 6ft tall with four legs with hooves, long horns, and brown fur. They can run at a speed of up to 37mph, weigh up to an impressive 2650 pounds, and are considered one of the ‘Big Five’ that are popular amongst game hunters.

Other animals on the Big Five list include lions, leopards, elephants, and rhinos.

The size of their horns depends on the type of buffalo they are and what gender they are. Male buffaloes have longer and wider horns, whereas females tend to have narrower and shorter horns. They are used for protection, to show dominance and to attract a mate.

For example, an adult male Cape Buffalo has curved horns that can grow to curve in the middle where the ‘boss’ (a hard shield on their head) is, creating a sort of helmet for extra protection.

Buffalos travel in herds that can number anywhere between 50 to 500, but this number increases during the rainy season. This helps protect them from predators and allows the calves to be raised in a safe environment.

Sometimes, older male buffaloes leave the main herd and go off on their own in a smaller pack. All buffaloes are grazers who eat little and often.

Where Do Buffalos Live? 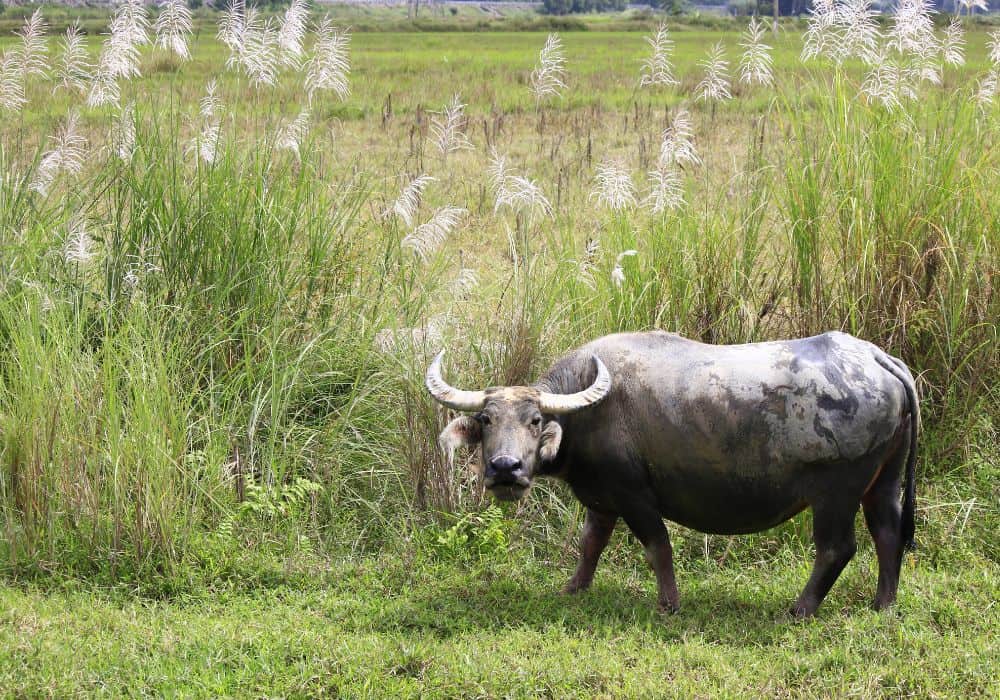 Buffalos live in several different habitats in different continents around the world depending on what species they are.  They are primarily found in Africa, but also live in America and Asia.

They used to be used to carry supplies to native people across the Great Plains, travelling from Canada to Mexico, but nowadays it is rare to see them in the wild in these countries unless they have been bred as part of a conservation programme.

The type of habitat they prefer are grasslands, usually in the African savanna, but they thrive on almost any grassland so long as they have access to enough food, the safety of a pack, and aren’t outnumbered by predators.

What Do Buffaloes Eat During Dry Season?

Buffaloes are herbivores – meaning they have a plant-based diet – and eat different foods depending on the seasons.

All food consumed throughout the year is essential for the necessary nutrients to maintain their health, so the changing seasons are useful.

During the dry season, buffaloes graze on various kinds of grass, roots, shrubs, and tubers. They have to move around to find food and water in the summer and can end up travelling around 30 miles to get enough of both to survive.

To get to roots and tubers, buffaloes have to dig in the soil or sand and uncover them to pull out. The plants also provide them with a source of water, something that can also be scarce during the dry season.

What Do Buffaloes Eat During Wet Season? 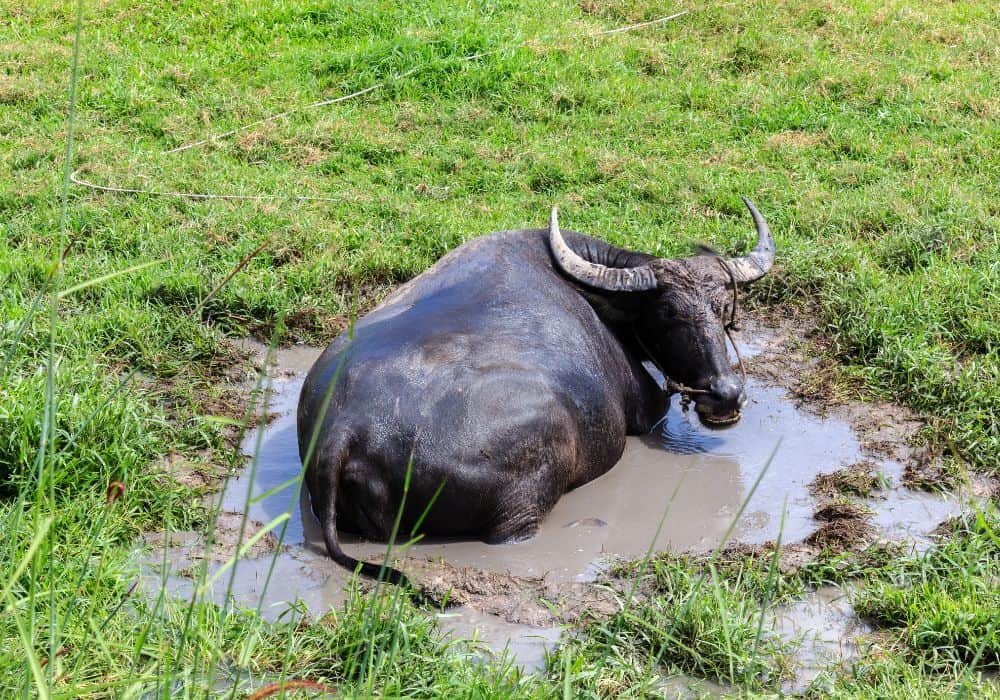 During the wet season, buffalos do still eat shrubs, but they tend to eat plants that are water-based such as water lilies and algae. They will also eat anything that grows in marshland, such as reeds, grasses, rushes, and sedges.

To protect themselves from the sting of insect bites, buffaloes will often wallow in the mud produced by the wet season. This has the effect of deterring the insects, as well as cooling them down when they get too hot.

The wet season also provides buffaloes with the opportunity to carry out some pest control. A bird will often fly in and perch on their mud-covered backs, then use its beak to pick off any lice, fleas, ticks, or other parasites from the buffalo’s fur.

National Geographic state that buffaloes have several predators that will attack if given the opportunity. Each one attacks for different reasons and in different ways.

Lions attack buffaloes to kill and eat them, as they are carnivores. They will attempt this by jumping on their backs to weigh them down and tire them out, before biting their hind legs to try to snap their tendons.

If they can do this, the buffalo won’t be able to walk and be easy for the lions to kill. If not, the buffalo will fight back, and the lions could lose their prey, and some may even be killed themselves.

Lions are the buffalo’s biggest predator in the wild and are even considered to be the top source of food for lions in some places.

Leopards are less of a threat than lions as they prefer to kill smaller animals, but it isn’t unheard of for one to take down a small buffalo or a calf if they get the opportunity.

They attack in much the same way as a lion, but as they only attempt the smaller buffaloes, there isn’t as much need to hunt in a pack.

African Wild Dogs are another species that like to hunt medium-sized prey, so again they prefer to attack the calves or smaller buffaloes. They have a different approach to hunting than their counterparts.

African Wild Dogs hunt as a group and will chase a buffalo calf until one of them catches it with their teeth. Once it has been caught, the other dogs will grab a piece of their prey and essentially tear it apart.

Hyenas are similar to the African Wild Dogs in that they hunt as a pack and go for the smaller buffalos, but some cases have been documented where hyenas only choose to attack the buffalo’s tail instead of the whole animal.

The hyenas have the same hunting style as the dogs and will treat their caught prey in exactly the same way. 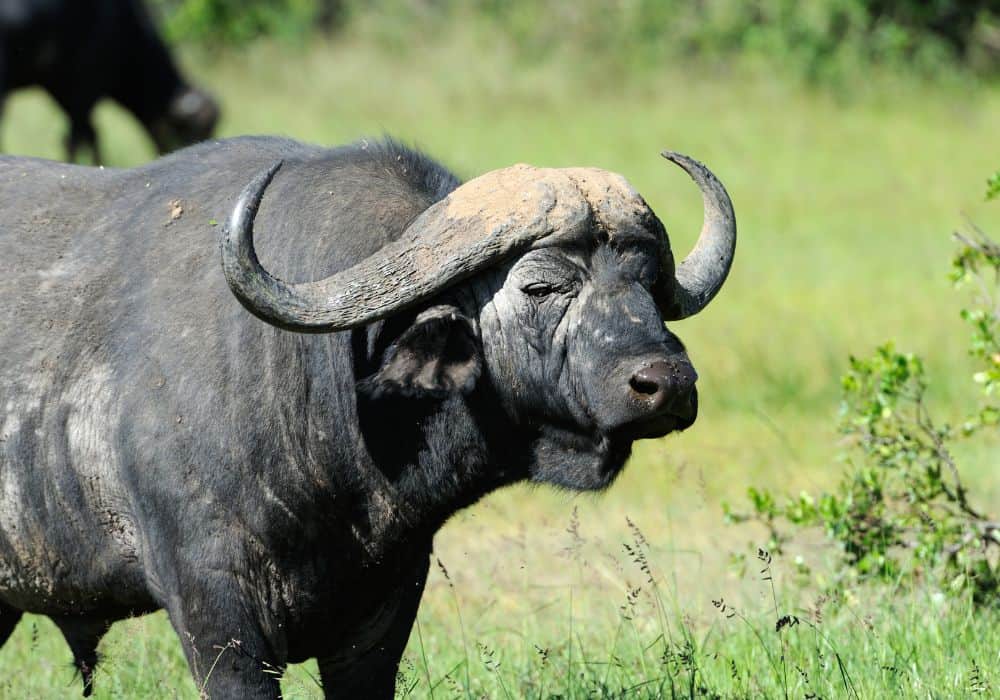 To conclude, buffaloes can eat the following foods:

We hope you have enjoyed this article and found all the answers you were searching for today! If you have any questions or comments, please leave them below and we will get back to you as soon as we can.

No. Buffaloes are naturally herbivores, so eating meat is foreign to them and may cause digestive upset if they were to ingest an animal. They should only eat plants or plant-based materials such as roots or some flowers e.g., water lilies.

How Long Do Buffaloes Live?

Buffaloes can live for up to 18 years in the wild, but some buffaloes in captivity have lived for more than 30 years! For wild buffaloes, it depends on their circumstances, how much protection they have within their pack, and how easily they can find food and water.

Yes, buffaloes have been known to be aggressive animal. They are sometimes used in bullfighting shows but will more likely show aggression to a human if they are being hunted.

Some hunting sites refer to them as the ‘Black Death’ of animals as they’re notorious for killing would-be poachers. Otherwise, buffaloes show aggression to other animals to assert dominance, scare off predators, and show off their strength to the females of the herd.

Sometimes, buffaloes are not only able to frighten away their predators but can also kill them in a fight to the death!