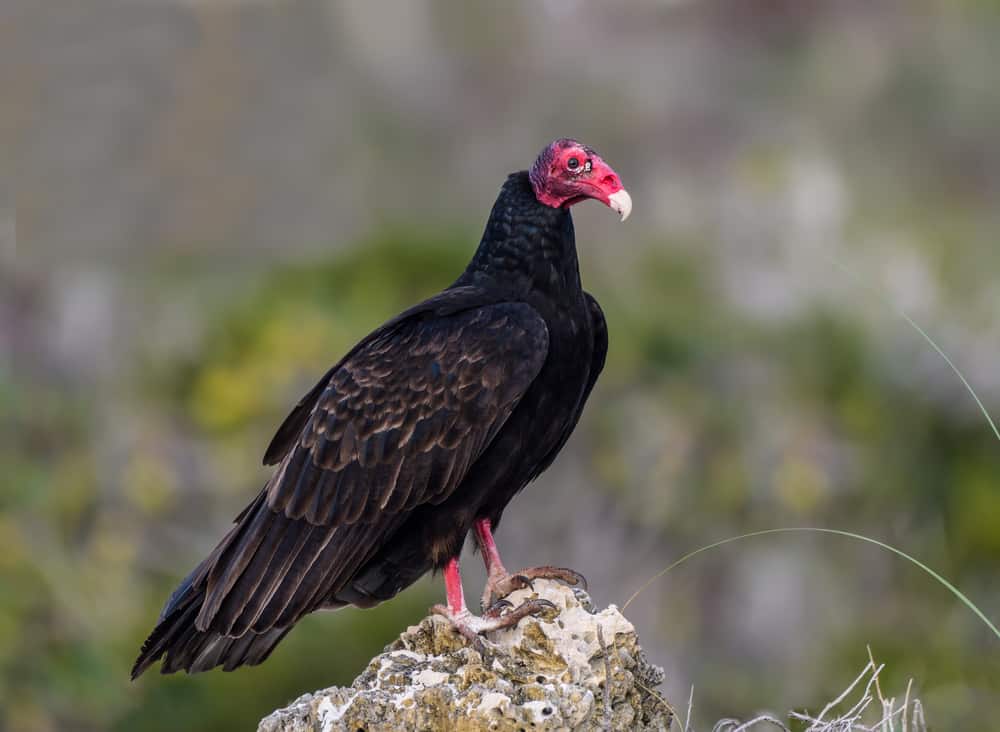 Turkey vultures are one of seven vulture species in the Americas. Big, with a distinctive appearance, and a bit of a controversial history, these birds are still a common sight to this day. But what do turkey vultures eat and do they pose any risks for people and livestock?

Well, the clue as to what they eat is in their name – and it’s not turkeys. Instead, as vultures, these birds eat like every other vulture on the planet eats – carrion. There are some caveats to this, however, and the turkey vulture’s diet is a bit more varied than you might expect. Let’s go into more details below.

Curiously enough, turkey vultures, as well as the other New World vultures are believed to have evolved from stork species a long time ago. This makes them entirely different evolutionary from the Old World vultures in Arica, Europe, and Asia. And, indeed, the two groups of vultures don’t share a single clade (evolutionary category) between them.

This leads to the conclusion that the only reason Old World vultures and New World vultures such as the turkey vulture look similar is that their lifestyle has led them to evolve such an appearance.

The first thing to note about the turkey vulture’s appearance is that its head does somewhat look like a turkey, hence the name. When the bird is in flight, the small red head can make it easy to distinguish from other vulture species. It also presents a funny contrast between the huge wingspan and the tiny reddish head.

The feathers of this vulture are another easy way to distinguish it from the other large birds in the sky. The turkey vulture’s wing feathers are dark brown (not black) on the top side and on the front but they have light grey plumage on the bottom side of the wings and tail. This, together with the dark brown feathers on the lower side of the body, gives the turkey vulture an easily-recognizable bi-colored appearance mid-flight.

Another way to tell these birds from other large vultures or birds of prey is the shape of their wings. When they fly and glide, the wings of a turkey vulture point slightly upward instead of being straight and parallel to the ground. This gives the turkey vulture a distinctive V-shape in flight that other vultures don’t have to such an extent. 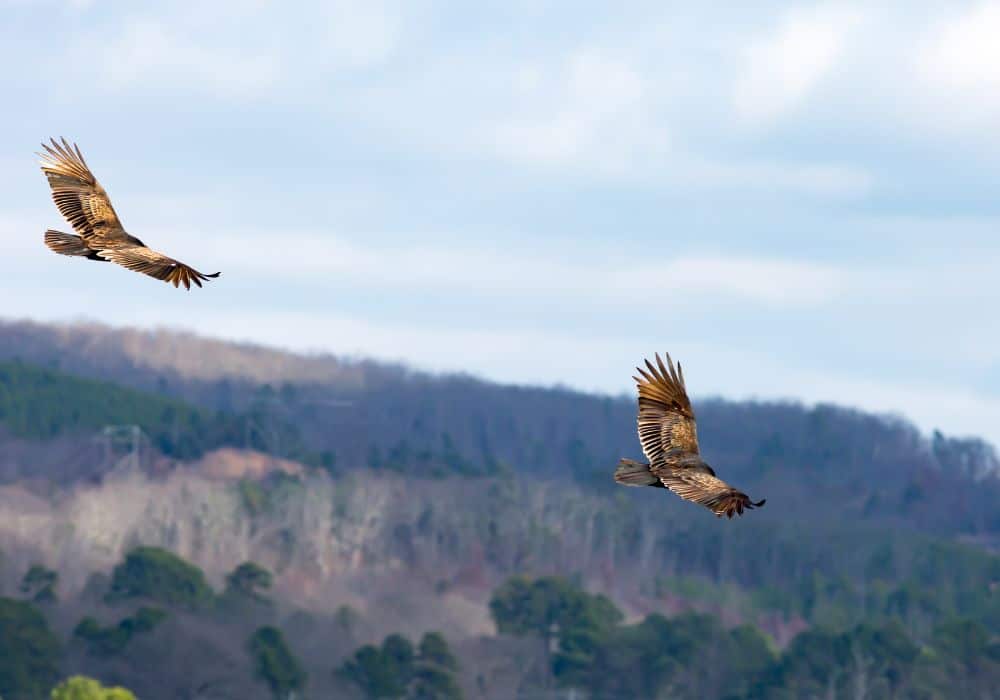 Turkey vultures can be seen anywhere from the southernmost tip of South America all the way north to southern Canada. This isn’t just because they are spread all across the two continents either – it’s also because turkey vultures migrate. In fact, these birds are the most migratory of all vultures and they travel between Canada and Venezuela every year.

Usually, when they migrate, turkey vultures do so in flocks of anywhere between several birds and hundreds or even thousands of vultures all at once. They don’t seem to do this for “protection”, however, as turkey vultures don’t really have natural predators when they are in the air.

Instead, they seem to travel that way both because 1) it’s convenient – each bird is trying to soar using thermal air currents so they naturally group up when they find the best thermal current, and 2) because turkey vultures are quite social birds anyway. In fact, often you can also see black vultures or even a hawk or two in the migration flock of turkey vultures, all just gliding through the air together.

Unlike some other vulture species, however, turkey vultures tend to avoid urban and suburban areas and instead can be seen in the more rural parts of the countryside.

As a pretty social species, turkey vultures are quite non-aggressive toward one another. They do communicate with each other via a combination of hissing and grunts which can seem aggressive but rarely are. Seeing fights break out over food or potential mates is rare and these birds often tolerate each other pretty easily. They also tolerate other species such as hawks, eagles, and other vultures, as long as they are also non-aggressive toward them.

That mellow attitude puts the turkey vulture at a disadvantage but that’s made up by these birds’ far superior sight and sense of smell – that way, they are usually able to just find a new meal after losing their first to the black vultures.

What do turkey vultures eat? 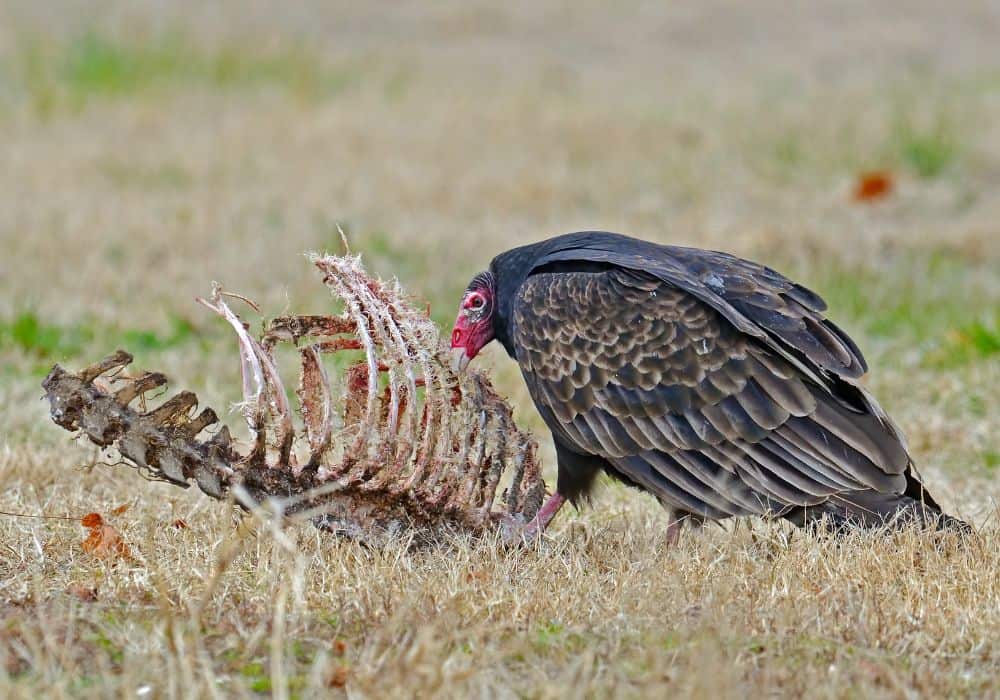 As a true vulture, these birds love carrion more than any live prey. They do prefer the carcasses of dead animals when they are “fresh”, of course, but these scavengers will eat even older carrion when they need to survive.

Turkey vultures can be predatory from time to time too, but only when:

In those rare cases, a turkey vulture can go after various types of live prey such as reptiles, small birds, snakes, amphibians, invertebrates, and – mostly – rabbits and other small mammals. Turkey vultures are also known to feed on human garbage when their keen sense of smell picks up something delicious in our garbage cans.

What’s also interesting is that these vultures will sometimes feed on vegetation too. When they need to satiate their hunger one way or another, turkey vultures can even go for pumpkins, coconuts, grapes, juniper berries, and some other types of vegetation.

What do baby turkey vultures eat?

When feeding their chicks, turkey vulture parents will make sure to find as much fresh carrion meat as possible. Because these birds are fairly lightweight and don’t have much lifting strength in their feet, however, they can’t fly whole carcasses to their chicks’ nesting area. Instead, they get as much carrion as they can in their throats and then regurgitate it for their chicks. 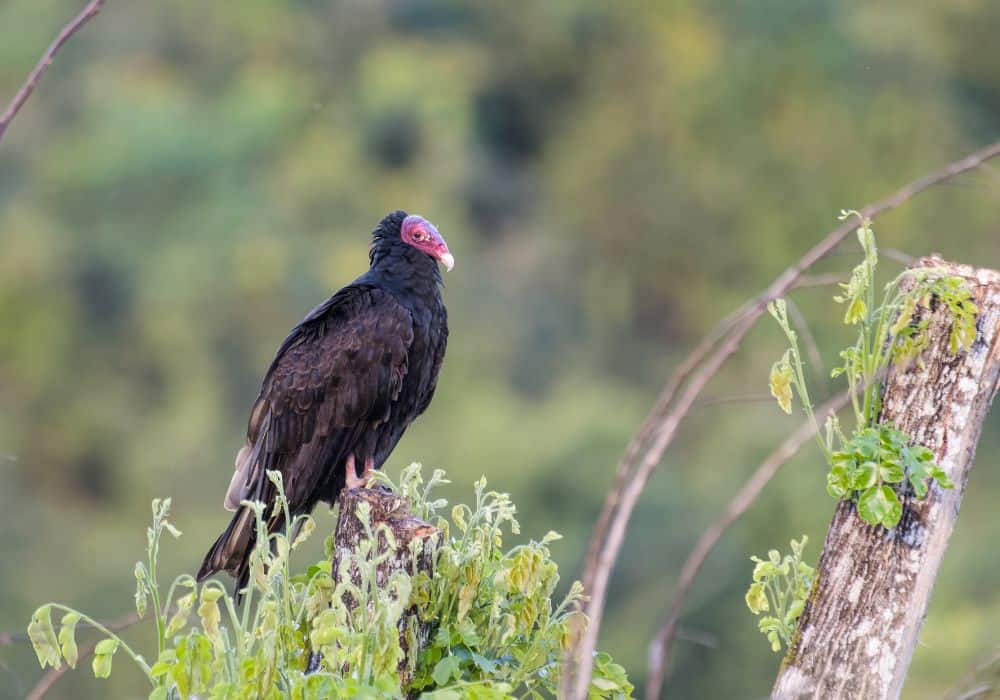 Turkey vultures aren’t just social, they are monogamous too. When they mate, they mate for life. Once the young females and males have coupled up after long chase-like dances through the air, each couple travels together, mates and nests, together, takes turns incubating the eggs until they hatch, and then take turns feeding the chicks until they are big enough to leave the nest.

Then the couple migrates together with the rest of the flock and they do this every year for about two decades as the average lifespan of these birds is 20 to 24 years.

Another curious thing about the breeding habits of turkey vultures is that they don’t actually build a nest for their eggs. Instead, they simply lay them in whatever caves, crevices, hollow trees, or hollow logs they find. At the same time, they do seem to remember their previous nesting sights come each breeding season and they repeat them whenever possible.

This lack of nests isn’t a problem most of the time precisely because turkey vultures flock in large groups and nest together. Plus, they usually only lay a couple of eggs – sometimes 1 or 3 but no more – which is pretty manageable. Once the chicks hatch, their mother and father start bringing them food in their necks and regurgitate it either in the chicks’ mouths or on the ground next to them.

Are turkey vultures a threat to people and livestock?

Not really. Turkey vultures are non-aggressive and will very rarely threaten human livestock, let alone humans or kids. That being said, there was an unfortunately long period of time when farmers believed that turkey vultures were killing livestock and spreading bacteria and diseases.

So, for a big part of the past few centuries, people would try trapping these vultures, poisoning them with anthrax and other chemicals, as well as just trying to shoot them on sight. This led to a rather significant drop in the turkey vulture population but that’s been remedied in recent years and the species is once again in good standing now that people understand that these birds are not only not a threat but – on the contrary – they help keep the land clean and sanitary.

Turkey vultures are fascinating, big, widely spread, and migratory birds that can be seen in most parts of both American continents. They feed on carrion like most other vultures but have a couple of interesting peculiarities in their diet, behavior, and skill set that set them apart and have made them even more adaptable than most other vultures.