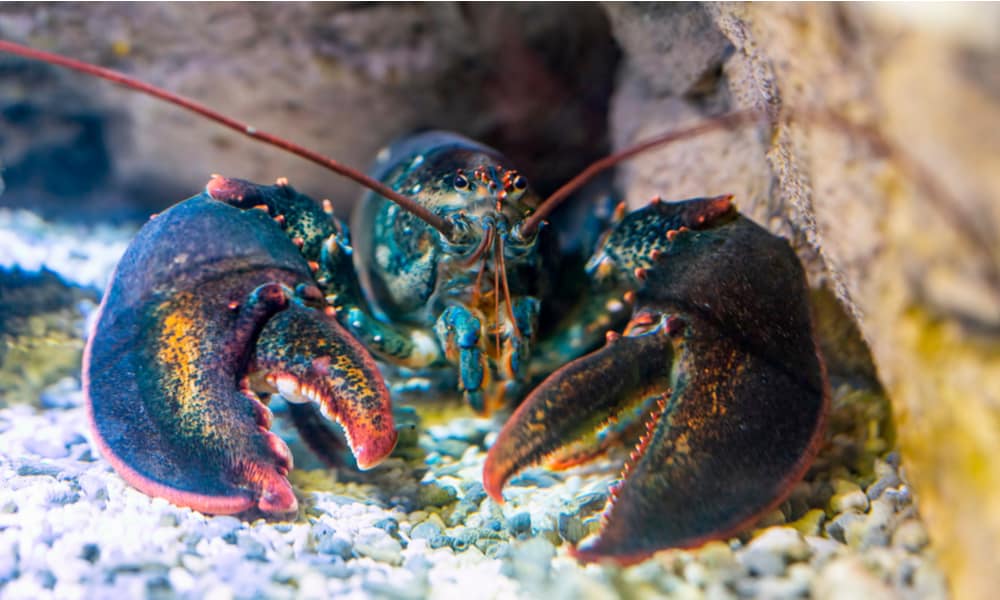 If you’re a fan of seafood, lobster probably ranks quite high on your list of favorite dishes, and you wouldn’t be alone since they’re counted among the most prized of all seafoods.

But how much do you know about these animals? Where do they come from? How long do they live? And how big can they grow? Here, we talk about all this and more as we answer the question, what do lobsters eat? 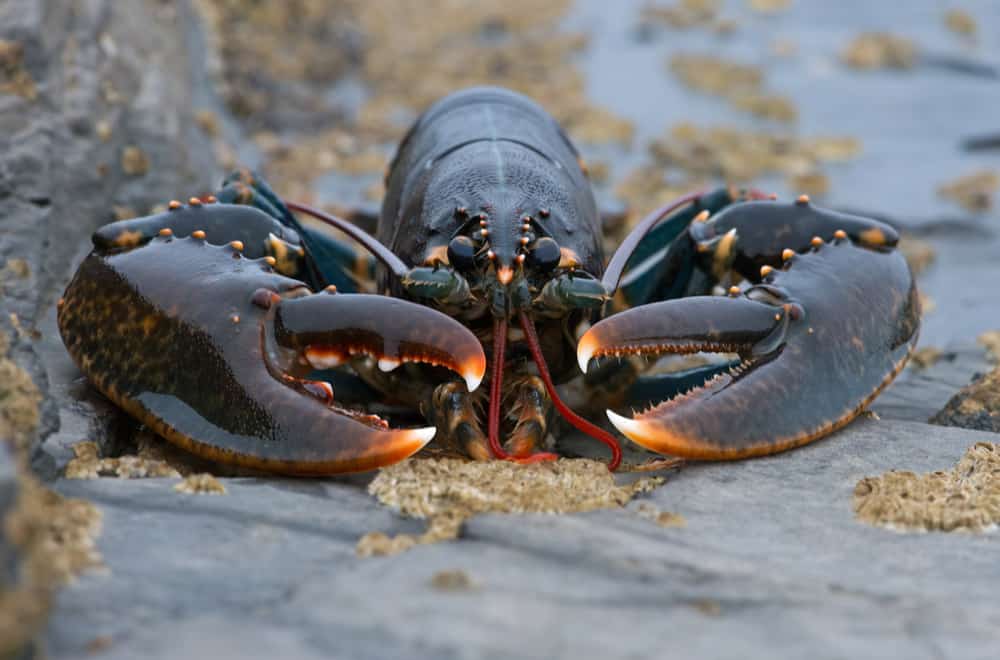 Before we talk about lobsters’ diets and more, first we need to take a quick step back and answer a more basic question – what is a lobster?

Lobsters are crustaceans, which means they are related to shrimps and crabs. More specifically, they belong to the Nephropidae family, which includes several different species of lobster.

Among the best known are the American and European lobsters, Homarus americanus and Homarus gammarus respectively – these are the two species that are most commonly caught for human consumption on either side of the Atlantic.

Lobsters have five pairs of legs – the back four are used for walking while the front two are enlarged, bearing the distinctive claws. Lobsters also have smaller claws at the end of all their walking legs apart from the back pair.

They also have an exoskeleton and a carapace that is shed many times throughout their lives as they grow.

Another important feature of lobsters is their antennae. Since they usually inhabit dark or murky areas of the seafloor, these are important for tasting and smelling the sea around them, which helps them find food.

And what’s not a lobster? 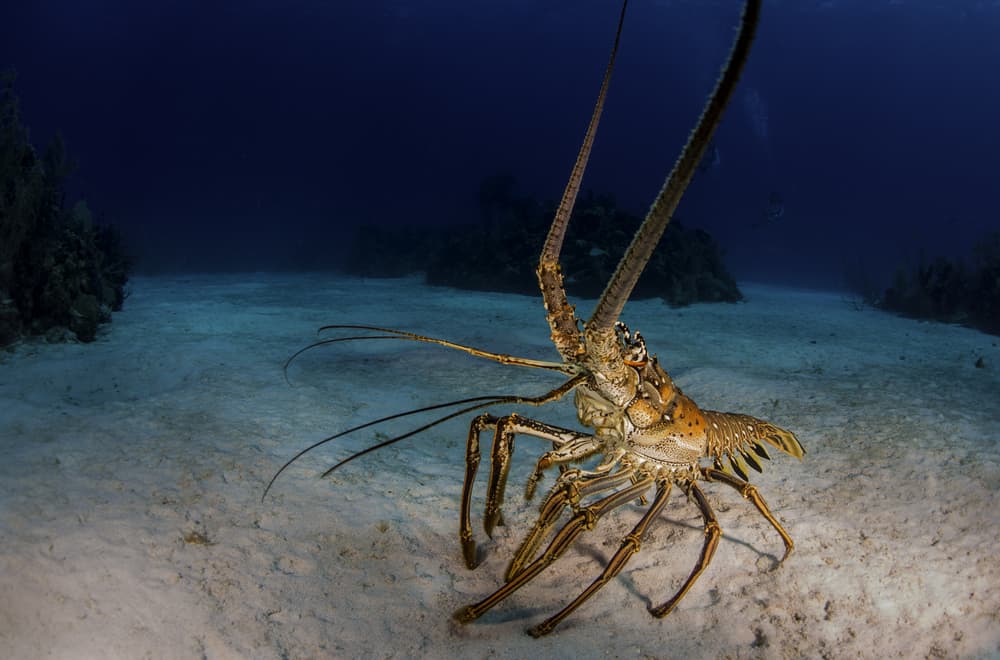 As well as true lobsters, there are also several other species that are often referred to as lobsters – but that are, in fact, not closely related species at all.

One of the best-known of these is the spiny lobster, another type of crustacean belonging to the Palinuridae family. Superficially, they look very similar to true lobsters, but there are also quite a few differences.

While they have a hard carapace and exoskeleton like true lobsters, they have much longer antennae, and they also don’t have claws on their walking legs – although females of most species have a small pair of claws on their front legs.

Although these animals are only very distant cousins of true lobsters, they live very similar lives and eat a similar diet. Furthermore, most people think of them as lobsters – or indeed aren’t aware that they aren’t lobsters – so we’ll say a bit about the diet of these animals too.

What do American and European lobsters eat? 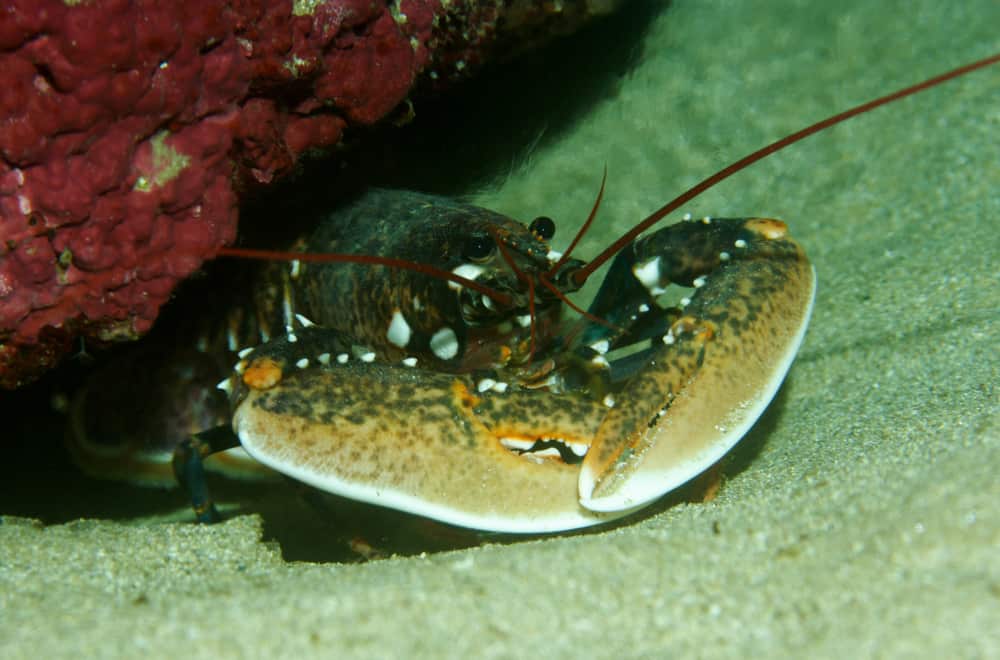 Although there are several species of lobster, we’ll stick to talking about the diets of the American lobster and the European lobster – but other species also tend to consume similar diets, depending on their habitat and size. So what do lobsters eat?

American and European lobsters are both omnivorous, meaning they are happy to eat both meat and vegetation. They are opportunistic, unfussy feeders, taking anything that comes their way. They detect their food by using their antennae.

Both species of lobster actively hunts for live prey, but they are also capable of scavenging and making do with anything they find when food is scarce.

Here are some common food items for American and European lobsters:

One of the favorite foods of lobsters is echinoderms, which is a group of animals that includes sea urchins, starfish and sea cucumbers.

Polychaetes are a group of worm-like creatures that usually live in the sea – and to lobsters, they are seen as a tasty snack.

American and European lobsters will happily devour any mollusks like clams and mussels that they come across.

Lobsters are crustaceans themselves, but they enjoy eating other seagoing members of this group they meet, such as crabs and shrimp.

If a lobster gets hold of a fish, it will quickly become a nutritious meal. It is estimated that lobsters in Maine now receive around 35–55% of their calories from the herring used in lobster traps there – and after eating, the vast majority then escape to live and feed another day.

When they can’t catch live prey or scavenge on dead sea animals, lobsters are also content to turn to plant matter to supplement their diets.

In captivity, lobsters have even been known to turn to cannibalism, although it is not clear if this is due to a lack of nutrition or a reaction to stress.

Cannibalism in the wild is rare, but it has been documented and is thought to occur during periods of overpopulation when other sources of food become scarce.

What do Spiny lobsters eat? 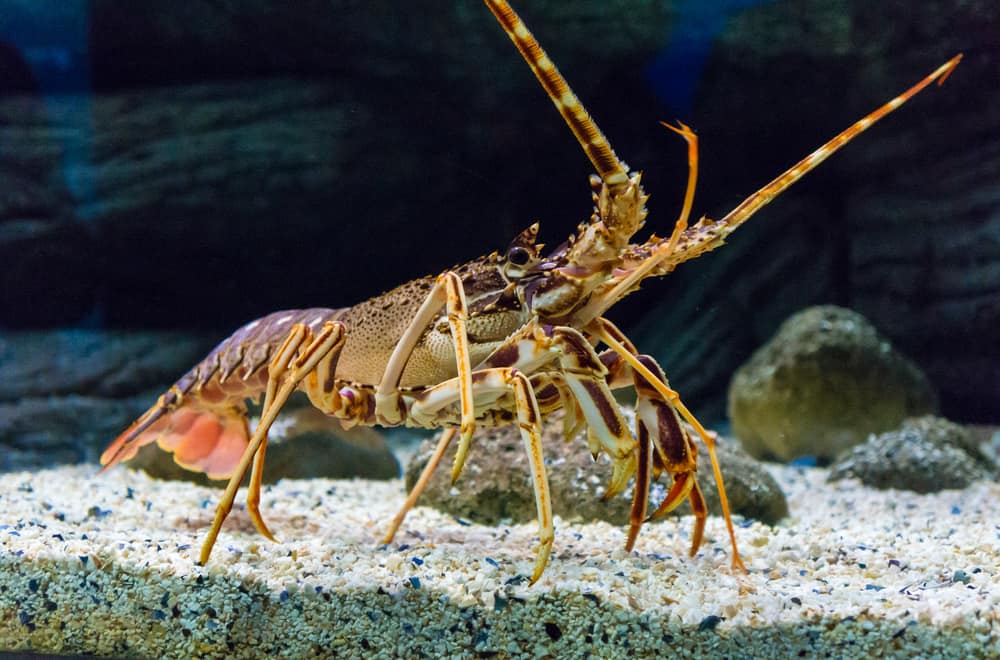 Spiny lobsters usually inhabit rocky areas and coral reefs, and like true lobsters, they are also opportunistic feeders that take whatever the ocean brings them. Here are some of the food items usually found on a spiny lobster’s menu:

Snails belong to the group of mollusks known as gastropods. Spiny lobsters don’t care what they’re called though and will gobble them down without hesitation.

Clams are a favorite food for spiny lobsters, but they will also happily munch on any other similar mollusks they encounter.

If you want to see how they do it, check out this video to see them in action!

Crabs are on the menu for spiny lobsters, too, although they won’t take on anything too big since crabs can be armed and dangerous.

Spiny lobsters aren’t put off by the spiky defense of sea urchins and will eat them whenever they can.

Here are a few fun facts you maybe didn’t know about lobsters:

1. Lobsters are not red!

Lobsters come in a whole range of colors, but the one color they are not is red.

They are usually dark in color, which helps with camouflage, but almost all lobster shells contain a chemical called astaxanthin, which is naturally orange.

Check out this video to see some of the more bizarre colors lobsters can be before they reach the pot.

If a lobster loses a leg or even a claw, it can grow it back. This is a useful defense mechanism since if a lobster is caught by a leg, the leg can simply be discarded, allowing the lobster to escape.

It doesn’t always save them though, as you can see in this video of a trigger fish attacking a train of spiny lobsters.

3. Lobsters have teeth in their stomach

Lobsters don’t have teeth on their mouth to bite food or to chew it before they swallow. However, when the food reaches their stomachs, it is then ground up by three hard plates closely resembling teeth – so in a way, we can say that lobsters have teeth in their stomachs!

Humans and other mammals – along with many other animals – have blood that is red due to iron-rich hemoglobin. However, lobsters have blood that is rich in copper, making it more adapted to transporting oxygen in colder temperatures – and this makes their blood blue.

5. Lobsters molt as they grow

The hard shell of a lobster that protects them would also prevent them from growing, which means lobsters need to shed their shells as they get bigger.

Younger lobsters need to shed their shells around 25 times in their first five to seven years of life, but after this, they only need to shed around once a year. Shedding the shell is hard work for a lobster, and around one in ten dies during the process.

And why do you never find discarded lobster shells when you walk along the seashore? It’s because lobsters eat their old shell once it has been shed – as well as anything else they can find – to reincorporate the calcium into its body as it grows the new shell.

6. It’s impossible to tell the age of a lobster

At present, it’s impossible to tell the exact age of a lobster – we can look at the size of a lobster and have a good guess, but there’s nothing that can tell us accurately how many years any individual has lived.

However, it’s thought that lobsters can live as long as 45-50 years in the wild, at which point, they can weigh up to 20kg (45lbs) and measure up to one meter in length (over 3ft). They can possibly live even longer in captivity.

When lobsters reach this kind of age, they stop molting, at which point their exoskeleton degrades or collapses, eventually causing the animal to die.

7. Female lobsters can carry live sperm for up to two years

After mating, a female lobster can carry around the live sperm for up to two years and can then use it to fertilize her eggs whenever she wants.

A fascinating creature – and delicious too if you’re into seafood

So there you are, now you have all the information you needed about lobsters, including details about what they eat and much more – and that will give you something to think about, next time you break out the lobster crackers as you tuck into the lobster on your plate.